I honestly didn't even KNOW that Boston had a half marathon until a few days before registration opened for the 10th annual Boston half marathon... on 10-10-10. This was one of the last races we scheduled. Simply because we already had a pretty full schedule. The race sold out in just a few hours, and "luckily" L and I were in the select few that were going to be able to run (after scanning the results, I bet 90% of the runners were from Massachusetts).

Anyway, after having had a successful race in Hartford, we got back in the car to head back to Boston. We wanted to DO something to kill time, and wanting desperately to stay out of the city, I saw Salem on the map and thought there might be some "historical" stuff there to go look at. The drive there? Terrible. Sooo much traffic. Sooo many lights. It took close to 4 hours to get from Hartford to Salem. Not cool!! Only to get there and not find anywhere to park. I see signs for the Visitor Center, and then we are greeting with the HUGE parking garage... charging $20!!!!!!! But there was nowhere else to park and by now I had been driving for HOURS and really just needed to get out of the car. So we paid it (grrr) and headed out.

Salem, Massachusetts is most known for the witch trials of 1692. Without thinking, we had decided to visit in October... a SUPER CRAZY month to visit essentially the "capitol of Halloween." Oy. We opted to NOT wait in any of the long (and expensive) museum lines, but wandered up and down the streets taking pictures instead (yay, free!) 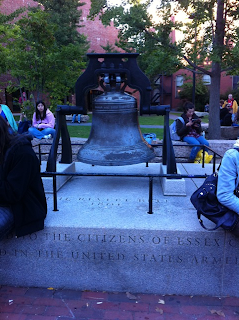 It was pretty chilly out, and in my hurry to get out of the car I had neglected to put on my sweatshirt. We felt we had seen enough, and it was getting dark. I wanted to get out of there while it was still light and I could see where I was going. Next mission was of course carbo load dinner #2.

We were STARVING and still at least 45 minutes from our hotel. We ate in the car. And it was delicious. Then the drive BACK through Boston. No more fun this time than any of the other times. We managed to find the hotel in spite of Boston's terrible highway system and the iPhone's sucky GPS. We were really hoping for a hot tub, but there wasn't one. Instead... early to bed.

The race was to take place in the "Emerald Necklace" (which means NOTHING unless you are actually looking at a map, then it makes sense). There was to be no parking at the race, and limited parking in the neighborhood. After having driven through the city, I had NO desire to try and find somewhere to park. I opted for parking at UMass Boston and taking the shuttle. It was free to park, and shuttles were ready to go. Worked great.

The start was supposedly only 3.5 miles from where we parked, but it took 15-20 minutes to get there. Oy, I would go insane if I had to drive in that every day!!

There was no line at the port-o-potties so we stopped real quick. We had some time to kill so we walked over to the "Expo" and the race merchandise was already selling out! I had planned to buy a fleece after the race, but almost all the sizes were already gone. I lucked out and got the last size small 1/4 zip fleece (in purple, sorry, no pic). That wasted close to 30 minutes. It was only 7:30 and we still had an hour until the race started. The line was looking decently long for the port-o-potties so I got back in line. Glad I did! Slowest moving line EVER! We finished and had less than 15 minutes until the start, so we ran over to bag drop, and it was CHAOS. The bag drop was inside a fenced tennis court, only one way in and one way out. And swarms of people trying to get in and drop off their stuff. About 5 minutes before start they finally started separating people by bib number to also drop outside the courts so people had a shot to get to the start on time. We had to run across the field, and once again, could not get into the corral because it was so crowded.

**I apologize for NO course pictures on this race. Due to the "prestigious" atmosphere, I didn't feel right about it**

I was NERVOUS. I was COLD. Luckily, not any time to dwell on that. Gun went off just a few minutes later. We were at the back of the pack. I wasn't too worried about that since the course had a very short time limit of 2:30:00. I had a similar attack plan to yesterday. Take it easy. As long as I kept running, I knew I'd be fine.

Immediately I thought "I'm screwed." Within the first few steps I could feel yesterday's race. I was cold, my muscles were tight and sore and I thought "I'm NEVER gonna make it." I forced myself to keep moving. The first mile of the race ALWAYS goes by the fastest for me. Concentrating on finding pace and good place to run usually takes at least that long. Within a few minutes, I saw someone's iPod fly right by me and hit the ground. Ouch. Glad that wasn't me. I had not had that much time to prepare for the course since I only saw the profile a few days in advance. For some reason, I thought most of the course was "fine" with only the last 2 miles being really tough. I was wrong.

There were digital clocks and mile markers at every mile. Which was nice. And I knew there was to be an aid station at roughly every even mile marker. Also nice. Unfortunately, the first two were only water. I'm not used to that! I really wanted gatorade! Somwhere around mile 3-4 was the first section of the first "out and back" - I couldn't believe how many people were already on their way back (not that I really knew how far away the turnaround was anyway). I saw L and realized she was probably only 5 minutes ahead of me. I was pretty psyched! The worst part about this course was that the out and backs were downhill on the way out, and of course uphill the way back.

I just concentrated on keeping moving. I really have to say that all the hill training I have put in has helped a ton. Sooo many people at my pace were barely moving or even walking up some of the hills. I actually was PASSING people. I took my 2nd GU around 6 miles, and around the corner the volunteers were handing out some Powerbar brand of gel. I grabbed one, thinking I'd take it around mile 10 to prepare for the monster hill at the end.

I gotta say I had a lot of negative thoughts during this race. I didn't feel like I was working that hard, but my legs disagreed. My lungs felt fine and my legs felt like tree trunks. But I forced myself to keep going. I did NOT want to walk. I wanted to at least get to "that point" where I could comfortably walk and still finish in the time allotted. But only if I absolutely had to. I never got to that point (hurrah!) and kept going. Saw L again during the second out and back and took the gel as planned around mile 10. I don't know if it helped or not, but I was one of the only people in my group that didn't walk up that killer hill in between mile 11 and 12.

FINALLY came around the corner and saw the final aid station at mile 12. Pretty annoyed that I could see the finish line off to my left, yet still had a little over a mile to go. The run through the Franklin Park Zoo was bizarre. We cut through this skinny path and I finally managed to pass a girl I'd been chasing since at least mile 5 (yes!!) and then finally saw the "800m to go" sign. It occupied my brain a few minutes to calculate how far that was (duh) and I realized the course was long (again). Passed mile 13 right before entering White Stadium where I sprinted down the track to the finish. Passed at least 3-4 people in the final stretch (wahahaha) and found L almost immediately. Never been so happy in my life to be done with a race. Ever. Well, except maybe Red Wing.

We grabbed some food and gatorade, headed to check out results, and then got our picture taken: 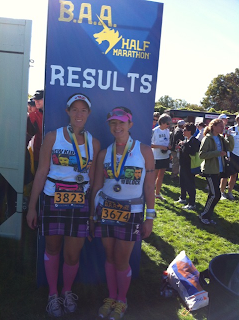 Quick explanation about the picture. Yes, we are wearing New Kids on the Block shirts. One of my guilty pleasures is I love their music. I loved them when I was in 7th grade, and I love them now (their 2008 album "The Block" is really good, I have at least a few of the songs on my race mix). We are wearing the shirts because NKOTB is from Boston.. so there you have it. And yes, we got LOTS of comments on our outfits. Not just the shirts, but skirts and socks. This skirt in particular seems to attract more attention than others.

Race #2 of the crazy weekend was a success:

I was literally SHOCKED when I synced my Garmin and saw how little the elevation change really was. Less than 400 feet!! It certainly felt a lot harder than that. But the exciting news is that not only did I have NOTHING to worry about in terms of finishing, but on a double header race I actually had my second best time! I am absolutely THRILLED that in both races I didn't have a single mile where my pace was over 10 minutes. THAT ROCKS!!

Anyway, we found the shuttle busses immediately, and got dropped off only a few minutes after I had hoped we would be. Got back to the hotel at noon, super quick shower. Dropped off the rental car (after having to completely fill up, the gas light was actually on) and took the shuttle back to the airport. Super annoyed that there was NOT a Fuddrucker's in Terminal B (like there was in terminal A where we had been on arrival). Settled for a bacon cheeseburger at a sports bar:

Flight left on time. Was NOT sorry to leave Boston. While the race was good, I was pretty unimpressed with the city. Quick flight to DCA, an airport I've also never been to. Cool landing, I got some pictures:

Get off the plane and CANNOT find our flight on the departure board. Finally ask someone, apparently we have to take a bus to the gate?? And by "bus" I mean a rinky dinky little bus that seats maybe 20 people. You exit out one of those emergency doors behind the airport. Literally goes about a block. And then you get off, back into airport. ARE YOU KIDDING ME??? I had like 45 minutes again between flights, 15 of it spent waiting for this stupid bus to take me one block away because the airport does not have a walkway between terminals??? Suck less, DCA. By now I'm pretty cranky and tired. Uneventful flight back to Denver which actually landed 30 minutes early (???) and we were NOT the last people dropped off at our car. Actually got home early enough to hang out with A for a bit and put her to bed.

Overall? Weekend of insane double-header was a success.
at October 11, 2010