We added the Hartford half marathon race to our calendar ONLY after getting accepted into the Boston Half. We figured we would save a bit of money and try our first back-to-back, with the races only being about 100 miles apart. And so it began...

I worked Friday morning, and then headed to the airport around 11:15 am. Flight to Cleveland was uneventful. Except... it was delayed a bit. And we were in the second to last row. And our connecting flight was due to depart in less than 45 minutes. If you know me at all, you know I'm a TAD bit obsessive about eating. I was freaking out about making sure I got my carbo load dinner, and of course use the bathroom before getting back on the plane to go to Boston.

Got off the plane, quick stop at bathroom. Luckily Sbarro was right by our gate:

Ate dinner on the plane, and it actually was pretty good. For the first time I opted to NOT have my pre-race beer. After landing in Boston I'd have to drive a little over 100 miles to our hotel, and beer makes me tired. Pretty happy that we landed a few minutes early in Boston. Only to have to walk a bajillion miles through the airport and then take a shuttle to the off-site car rental. I was happy that there was no line, but completely not amused when we went to drive off the lot and told we had the wrong car. Seriously?? It's already almost 10:00 and I have 100 miles to drive tonight! Took another few minutes to get that straightened out, and finally we were on our way. UNIMPRESSED with Boston... $3.50 toll the second I leave the airport, and two more within a few miles. Grrr.... for the most part, the drive to Hartford is uneventful. But I'm tired and just want to get there. Found the hotel pretty easily, checked in, got everything ready for morning:

Got to bed just after midnight, setting the alarm for just before 6 am.

Even though I sucked big time with our travel arrangements (I don't do well under stress and travelling so late at night makes me nervous and tense), I picked a GREAT hotel. I'm not sure if they were the host hotel or not, but the Crowne Plaza even had special room keys for the marathon. How fun is that? It was also less than a half mile walk to the "XL Center" where we were going to be able to do race day packet pick-up. That was to be open from 6-7:30, so we figured we would have plenty of time after getting ready and eating a quick breakfast. We got there at 6:45... and I should have taken a picture. WHAT.A.DISASTER. People everywhere. I swear everyone who was registered for the race must've done race day pick-up. There were a billion people in line. And even AFTER getting your bib, you had to get into ANOTHER line to get your shirt. GRRRRRRR.... We weren't quite sure where the start line was, but luckily with a race of this size, you just follow the herd. We walk a few minutes and see this:

There were about... 20 port-o-potties. And a billion people in line. I start to freak out. Really? It's like they had no clue that 10,000+ people PLUS spectators were going to be there today. We get in line just after 7 and it is BARELY moving. 20 minutes until the start I have to get out of line to take our stuff to bag drop, come back, we've barely moved. At about 10 minutes until the race is to start, people in front of us start getting out of line to go to the start. Um. I can't hold it. And then with only a few people to go... a girl announces it is out of toilet paper. FREAKIN A!! Really?? A volunteer on a golf cart comes up and says "there are tons of potties at the start line" - thanks for telling us NOW... we run off to the start, sure enough a billion potties and no line. Phew.

Although... literally CANNOT even get to the start line. Spectators are crammed right up to the gates and there are no openings to squeeze through, we have to wait for the gun to go off and then get started. And off we go...

I knew the course was going to be a bit hilly and challenging, and in light of my double header, I decided to take it easy going out. Which wasn't nearly as easy as it sounds. Like most big road races, the road is simply not wide enough to handle all the runners at the pace they want to go. I lost sight of L almost immediately. The road was crazy... torn up, tons of potholes and cracks, it was hard to dodge around all the people AND watch the road at the same time. There was the full marathon, half marathon AND 5K that all started the same time, and there were supposed to be arrows directing each course. I knew the full and half was supposed to split around the first mile, but I did not see any mile markers. Luckily they had blinking construction signs directing people where to go. We split and the real race begins.

The first few miles were congested and I didn't see any of the mile markers the first 3 or so miles. I took this pic somewhere after mile 3: 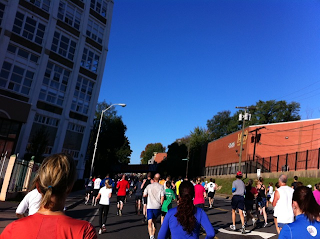 I was pleasantly surprised at how good I was feeling. My legs felt good, my foot was not bothering me, and I didn't feel like I was overworking myself. If you are someone that likes a TON of crowd support, this is the race for you. I think pretty much the entire course was lined with spectators, which was nice. The field finally started to thin out maybe five miles in. I was still feeling pretty good. Around mile 5.5 I realized that the course was going to be long. By at least .15, maybe more. I took my GU just before the 6 mile marker, and the course had a timing mat at that point. I knew I wasn't going to PR, but I was happy with my pace. I hadn't seen this in a race before and thought it was fun:

Around mile 7 I was handed a little ING orange cowbell... for some reason I held onto it and ran the rest of the race holding onto it. Felt good throughout the rest of the course, and I gotta say, I was relieved when I saw we were heading back into the downtown area. With less than a mile to go, I was pretty surprised to see so many people walking at the 12 mile marker. Really?? The last mile was rough, and I somehow managed to get behind a group of about 4 girls in the chute holding hands all the way across.

FYI: IT IS VERY RUDE TO DO THAT IN THE CHUTE. WOO HOO THAT YOU ALL FINISHED TOGETHER, BUT SOME PEOPLE LIKE TO SPRINT THAT LAST SECTION, NOT WATCH YOU HOLD HANDS AND DO A LITTLE SKIP TO THE END.

So yeah. I didn't get to sprint through the chute, but that's ok. Pleased with my overall time and splits:

Didn't get the medal right away. They had the brilliant idea to funnel people through an incredible narrow chute to get out of the finisher's area. I had seen L just after crossing the line, and she said she lost me in the crowd of people (doesn't help I'm so short). It took a good 10 minutes to get the medal and out of that claustrophobic nightmare. I was pretty happy to get a finisher's water bottle pre-filled. Good call, Hartford!

The post-race food was pretty good. I had some apple pie, a half a bagel, vegetable soup, some sweet potato chips. We didn't sit too long, we got swarmed by bees! Easy peasy bag pick-up, and then we headed back to the hotel, we were supposed to be checked out by 1:00.

Only thing we "did" in Hartford was walk through downtown back to our hotel: 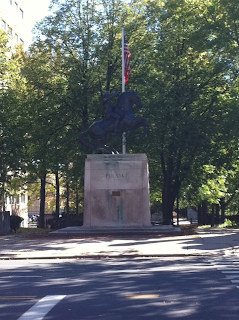 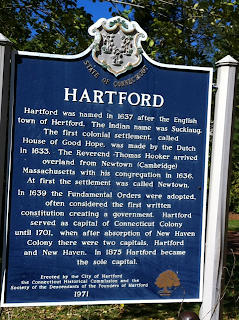 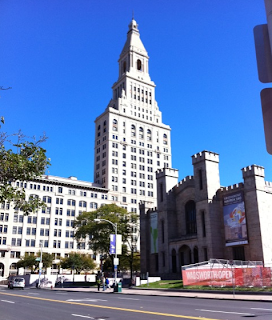 Got back to the hotel, and realized that we didn't have a single picture of our full outfit. This was taken in the hallway of our hotel. Lighting is terrible and doesn't do it justice: 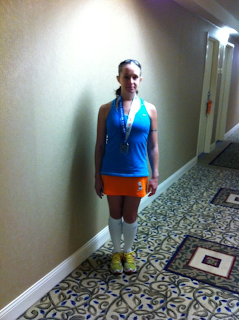