With the overnight time change, I was concerned about oversleeping. Even though the race didn't start until 10:00, the alarm was set for 7:45, with a plan to leave between 8:15 and 8:30. Of course I woke up at least an hour before the alarm went off. (We slept a lot better when we opened all the windows - less stuffy and some ambient noise).

Since A wasn't going to be able to run after all, I got ready quietly before waking A up. We had to make sure we were completely packed, as we had to check out and leave our bags with the hotel.

Our hotel was located on the race course, so I wasn't sure what the bus schedule would look like. Turns out, the buses were running just fine and we arrived over an hour before the race start. That time allowed me to contemplate my wardrobe choice and go through the bathroom line numerous times. (Props to the race for more than enough port-o-potties - I never waited more than a few seconds for one). 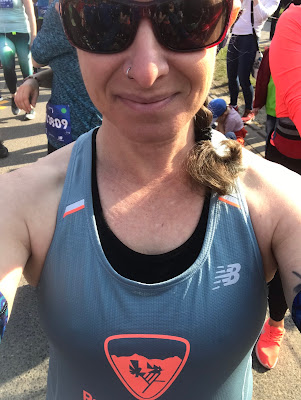 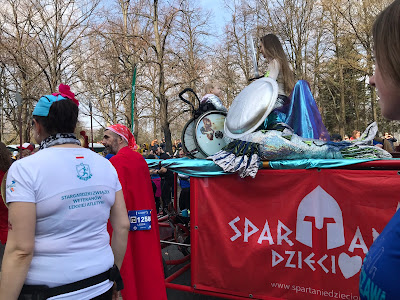 Unlike years ago, when I was running multiple half marathons a month, I haven't been racing much at all. Outside my little RMRR races, I haven't run a road race since last summer. Most of my races (until the 7 miler I ran in early February) I've been running using intervals. Honestly, it never crossed my mind to run intervals for this one. The plan was to keep it easy the first few miles so my legs didn't cramp. I've been running fairly well during my Saturday long runs, so my A goal (which seemed insane to even contemplate) was a 2:15.

Boy oh boy was this race crowded. Reminiscent of New York City or something, I was constantly trying to weave around people to find a good pace. Mile 1 clicked and it was a sub 10 minute pace. Uh oh. I cannot keep this pace up. I was already hot and pulled my arm sleeves down. Mile 2 clicked by - another sub 10 minute pace. Getting tired already, but the main goal was to make it until the aid station without walking. Made it. What a cluster. All the tables were empty and volunteers hastily trying to fill cups. Grabbed water first and then poured some electrolyte mix in. Hands got sticky. Mile clicked, just over 10 minutes. Not bad, and I know that my pace slowed because of the aid station. 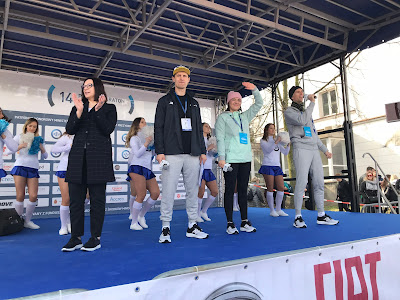 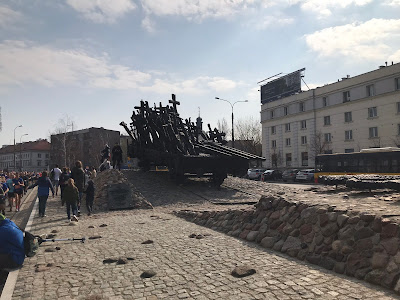 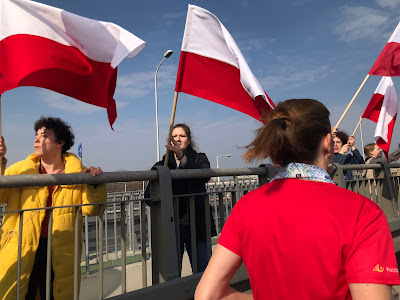 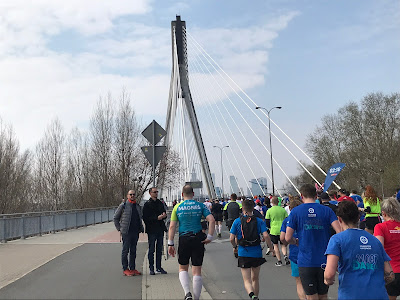 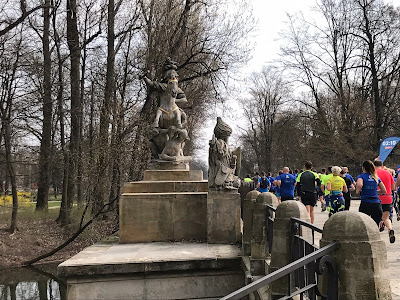 The course is SO CROWDED, and honestly, not much to look at. The miles keep clicking my. Still running well. I have passed the 2:20 pace group and the 2:15 pace group. Somewhere after the second aid station, I see the 2:10 pace group. With the last two aid stations, I end up leapfrogging with them. For me, the course is already measuring long -  I know it's because I am running terrible tangents. I am glancing at my watch and in my head, I think, is a 2:10 (???) actually possible? Probably not. I'll end up crashing & burning. This pace is so fast!! With just over a mile to go, we are running by our hotel and we are in the tunnel. I have passed the 2:10 pace group. Upon exiting the tunnel, 20k mark. Oh.My.God. I can run under 2:10. Maybe even under 2:08?? 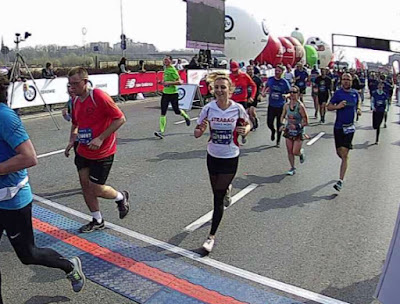 The finish line looks soooo far away. I am getting passed, I have so little energy left. But I cross the line with my fastest half marathon time in EIGHT YEARS. Yes, you read that right. The last time I ran faster was NYC half marathon in March 2011. 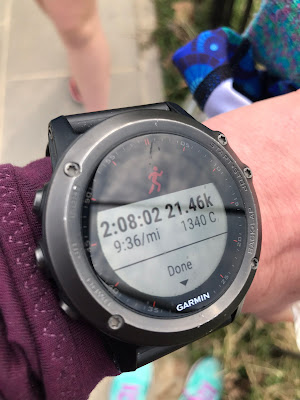 Thoughts:
Thankfully, A and I had spent some time discussing meeting points and we found each other easily. Went to look at the finisher food and I was pretty unimpressed, so we decided to go back to the hotel and grab our bags and go to the airport.

Due to the race course, the bus was not operating, so we had to walk the mile+ back. On the way, we got some ice cream. Yum! 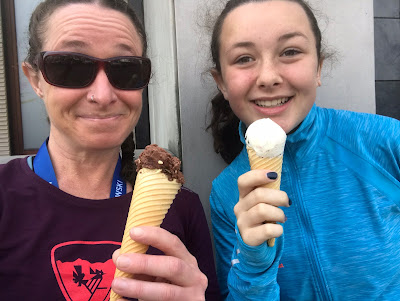 We mapped our way to the train to get to the airport, and got on a train. About 4-5 stops in, we realized... we were no longer following the train we thought we were. Uh, what?!? We decided we had to get off and figure out where we were, because we were moving further and further away from the airport??

We got off the train and found ourselves literally in the middle of nowhere. NOWHERE. We tried asking people how to get to the airport but us, speaking no Polish were waved away. The map near the tracks made no sense. We have no WiFi, and just over 2 hours until our flight leaves. A is panicking.

A younger woman approaches us and asks if we are lost, and offers to help. She says because it is Sunday it is almost an hour before the next train arrives, but we would still have to make a connection and would likely miss our flight. She offers to help us find WiFi where thankfully, we are able to get an Uber. Holy crap.

For the low cost of $13ish (for a 20-25 minute ride), we get to the airport, through security, and make our flight. Thankfully, we have time to get something to eat (still haven't eaten anything other than gelato since finishing the race HOURS earlier). 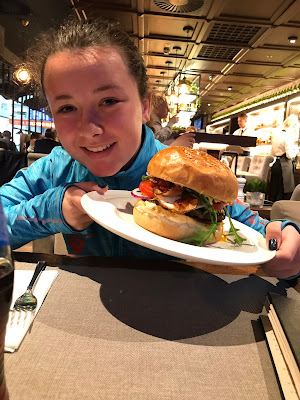 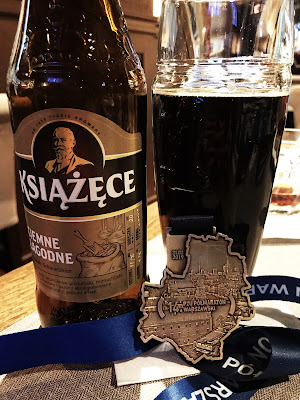 Flight is delayed because of baggage being loaded, but we found out the flight itself was just under 30 minutes. Thankfully, I had arranged for an airport shuttle, and our driver met us at the exit.

It was about a half an hour drive to the hotel, we checked in with ease and were told our room was on the top floor. Yes. 121 steps and no elevator. Guuuuh.

But the view from our balcony was certainly worth it. 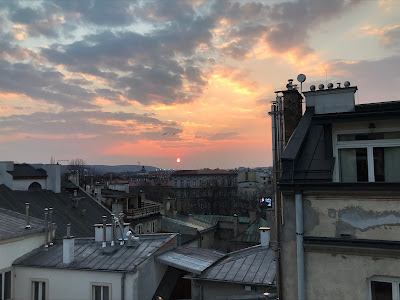 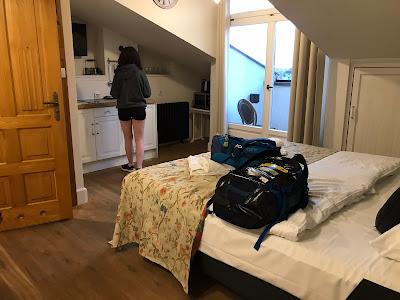 We unpacked and I finally was able to take a shower. I managed to book a hotel only a block away from the main square. We wandered around a bit and then settled on an Italian restaurant for dinner. Food was good, service was slow. I absolutely LOVED the location of our hotel - it was so close to everything and so pretty!! 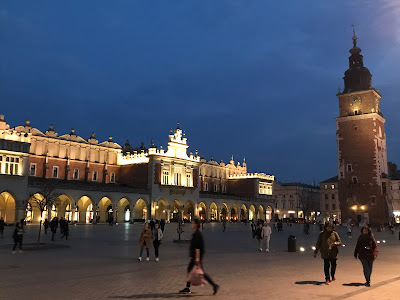 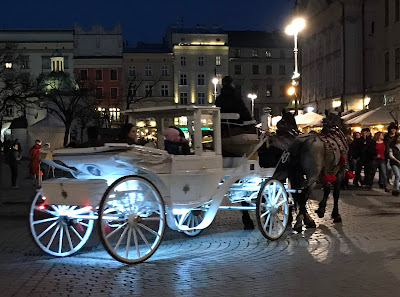 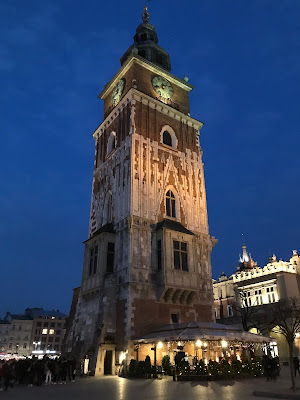 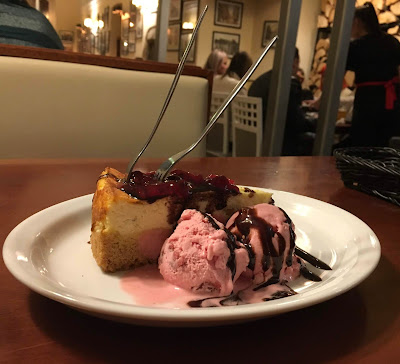