Even though I wasn't going to be able to get much sleep anyway, I managed to wake up more than thirty minutes before my alarm went off, around 3 am. Geez.
Last minute stuff while we still had internet, then finalized packing and headed downstairs to check out of the hotel. Turns out that the shuttle I had scheduled when we checked in somehow was missing (of course). Thankfully, the gal at the desk was able to call a taxi for us, and it was actually much cheaper anyway. Phew. Drive to the airport was uneventful.

When we had checked in through Ryanair (an airline I have never used), it said that since we were not flying with EU identification that we had to have a paper boarding ticket. When we got through the line the guy told us in the future we would need to have that ready before we got there. It ended up working out for the best, the paper ticket we had did NOT have us as an economy ticket, and we were able to get our backpacks on without having to pay extra money (FYI, this is the Spirit airlines of Europe, without paying extra, you can only bring on a 20cm x 40 cm bag).
Upon arrival in Berlin, we had approximately a million hours until our next flight. We found a cafe and watched a movie on Netflix - "Isn't it Romantic." Silly, but it passed the time. I don't even know how we got through the rest of the time, although we did have food and more dessert. 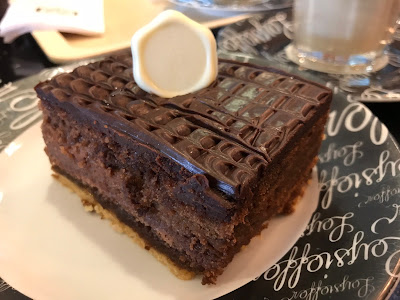 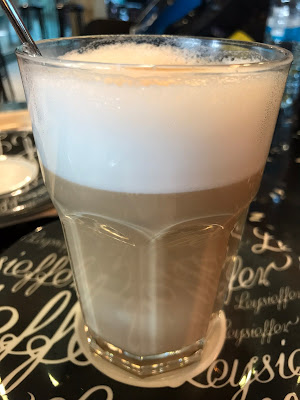 Going through security was fast, but then we were dumped into a small holding cell until our flight for Reykjavik left. I passed time by having beer. 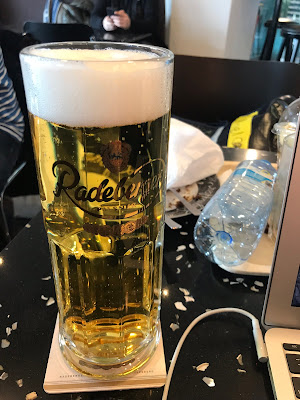 Both flights were uneventful. Over the course of 11 hours, I watched "You've Got Mail," "Sideways," "Valentine's Day" and part of "Juno." I also managed to doze off or a few hours here and there. Quite the accomplishment since I can rarely sleep on a plane. My biggest "success" may have been not getting up the entire flight from Reykjavik to Denver (8 hours).

We landed pretty close to on time, breezed through customs (seriously, if you don't have mobile passport, download it - such a time saver) and took the shuttle to the car. I ordered tacos for pick up since I knew we didn't have any food at home.

Dinner, a load of laundry, and I think I managed to be in bed shortly after 9.