I had picked up our packets on Friday after work to avoid the race day pick up, although it wouldn't have been a big deal.

I had slept like crap. Seriously, took forever to fall asleep and then I tossed and turned all night. Got up cranky and tired. A was going to be volunteering with Pete at Cattail while I ran. We left the house a few minutes later than we planned because we were looking for beanies. It rained all week and it was COLD.

Even though the volunteers were supposed to arrive by 5, I hadn't signed her up as an official volunteer because she would be basically pulling a double shift and I wanted to be able to pick her up when I wanted.

When we arrived at Cattail we found that she was only the second volunteer to arrive and Pete was very happy to see her! Chatted for a few minutes before I headed into the park. 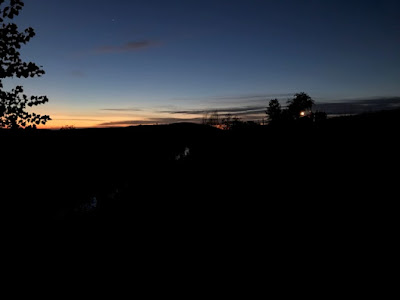 I was still there with about 45 minutes until the start so I used the bathroom and then sat in the car until about 15 minutes before the start. I immediately found Francesca, Jandy and Lisa. We discussed our race plans and all started together. 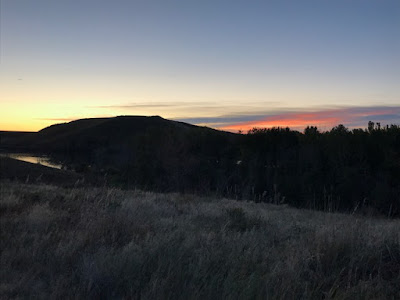 My not-so-secret goal was to run a course PR (around 7:05). I hadn't run the true 50K course since 2012, so NONE of the first loop seemed familiar to me. We ran up the road and then turned onto the trail, where we almost immediately had our first water crossing. More like a baby creek crossing (at least compared to the ones we would encounter later). I was also very surprised to be headed right towards Mt. Carbon. I know A had said that she ran up it last year, but I really did not remember it from the year I ran it.

We were ON Mt. Carbon when my watch beeped the first mile. That type of climbing on tired legs is tough! We all stayed together through the initial decent down Mt. Carbon. Jandy managed to break away and was out of sight pretty quickly.

The course split at the location where the Homestead aid station used to be. I was already getting hot and took of my jacket. I held onto it for a while thinking that I would give it to A. Only after about 15 minutes I remembered that we wouldn't see her on our first small loop. D'oh. Jen was near the road cheering and taking pictures. We crossed the road and ran the same section of "new" trails that we had done at the 7 mile Lakewood trail series event. Just like when I had run it before, took lots of walk breaks along the road as it was uphill-ish feeling.
Looped around to the boat ramp aid station where we got to see Sheila. Then it was a few nice miles of shaded trail until we got back to the start/finish and headed out for our first big loop.

Francesca stayed with us for about half of the big loop, although she was getting over a plague of some sort and wasn't even sure if she was going to be finishing the race. We had a great time running/walking and chatting. It was getting warmer this loop and when we got to the river crossings I was pretty happy for the cool down. The third crossing was INSANE this year. I actually had to hold up my skirt to keep it from getting saturated - water was mid thigh on me!!

Like I have done in past years, I took off my shoes on the pavement on the way to Fox Hollow, which is how I discovered I had a hole in my nifty 40th anniversary Runners Roost socks. WOMP WOMP.

All I was taking at the aid stations was soda. I was probably not fueling as well as I should have, but for some reason I was just not hungry. I wasn't nauseous or sick or anything, just not hungry. The stretch from Fox Hollow to Cattail is only 2.4 miles, yet they ALWAYS feel like the longest two miles ever. We have a big climb right out of the gate and then we run along Morrison road for a while until we duck into a small gully where we actually do run next to cattails. We FINALLY arrive at Cattail and I leave jacket on top of A's bag, give Pete a hug and then we head out. A was at the one turn where people have been known to cut the course so we stopped briefly to give her a hug for heading up the last nasty hill of the loop. 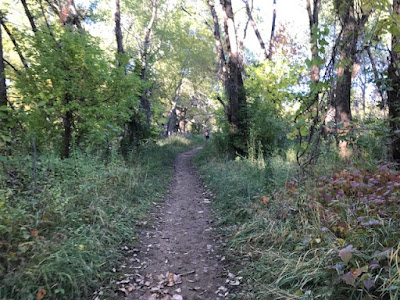 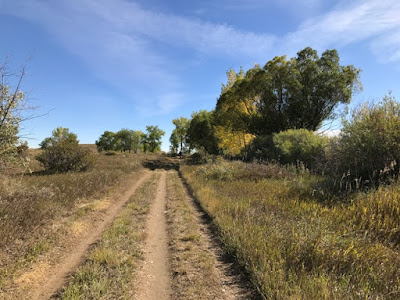 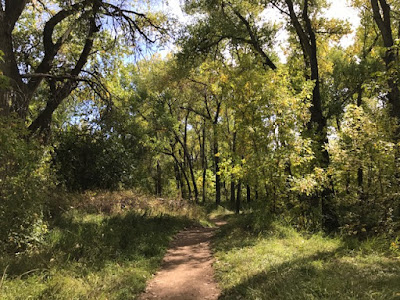 It was pretty hot by this point and I was starting to get annoyed and agitated by it. I was watching my watch more than I normally do. At this point it seemed totally reasonable to assume that I would be able to run a course PR as long as I didn't totally fall apart. We ran a lot of the section to the boat ramp, where we saw Sheila again. I had my only fall of the race between the Boat Ramp and start/finish - a pretty decent fly through the air and do a roll type fall. The bigger loop runs on a few other trails and it was longer to get back to the start/finish. Lisa's husband (who I had not met before) was dressed as a character from Pokemon, so that was fun.

Headed out for the last loop, and by calculations, as long as we did the loop in around 3ish hours I would PR. (Spoiler, that didn't happen). On our way up Mt. Carbon we got passed by Michael, who was running the 100K (and going for an actual course PR) . He was on his 4th loop (of 5) and said it was "getting hard." Hahahaha. Lots more walking this loop. The river crossings seemed harder too. The current seemed to be flowing faster and the rocks seemed more slippery. 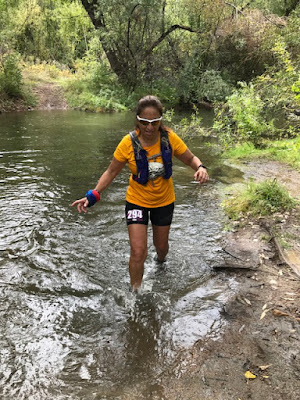 Didn't bother to take off my shoes this time, and I was imagining the hole in my socks getting bigger by the second. Fox Hollow to Cattail was the longest stretch ever in the whole world. We were really lucky to finally have some clouds roll in and it was no longer a billion degrees. Got to Cattail aid station and A said that she had run with Jandy a bit and that she would be giving her a ride to the finish when she was done.

On our way out of the aid station there was a guy warning everyone about a rattlesnake. WHICH WE FINALLY SAW LIKE AN INCH OF THE TRAIL. I took a picture from a safe distance and we quickly headed out.
I knew by then that my PR wasn't going to happen, but we still had a goal for Lisa (which a PR was for her was pretty much inevitable) and we set a goal to finish under 7:20. 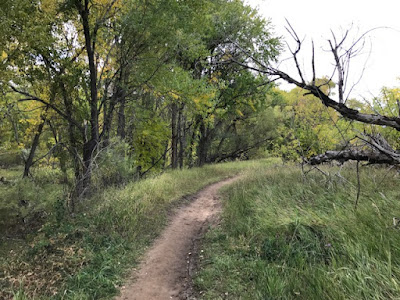 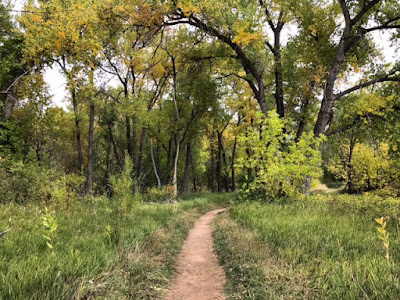 A lot more walking than I had hoped. It really seemed like we were never going to make it back. We got close and I told Lisa that I wasn't sure I was going to be able to run into the finish because my legs were soooo tired. Obviously I was being dramatic and I ran through just fine. LONG day, and it was super awesome to have Lisa join me again. She is a good running buddy for these ultras! 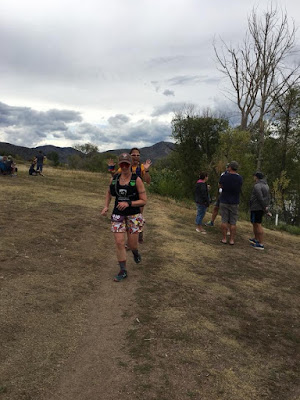