Once again, the expo was held at the National Western Complex. And once again, they charged $5 to park (even though Hot Chocolate offered free parking at the same venue this year). I had almost gone Friday after work, but they expo closed early and the best way to get there has been under construction (and CLOSED) since the spring, so A and I went on Saturday morning. As I remembered, SUPER CROWDED. Nothing of particular interest at the expo, but we saw dozens of people we knew, so we ended up being there for close to an hour.

A had decided to volunteer at the Roost aid station. She wasn't going to be close enough to the start line for me to walk her over, so I talked with a few people and the plan ended up being dropping her off at Union Station to walk over with Ang. I was assured that there would be no roads closing early. Since I had the VIP package, I was, however, concerned about closures since I had to be in my lot by 6 am. I left A at Union Station at 5:37 and headed out to 20th to get on I-25, since we were instructed that 25 to Colfax was the only route that would be open until 6.

First, Wazee was literally being closed while I was waiting at the light at 20th. At 5:40. I got onto 25 and took the Colfax exit. Right as I was approaching Speer, I could see that lanes were being closed from 3-4 to ONE. Technically not CLOSED, but slow for sure. Then, right as I'm only a few blocks away from my lot, Colfax completely closed at Court Pl, more than ten minutes early. Had to navigate down Broadway to circumvent closures and rolled into the lot at 5:57 am. Phew. I ended up being parked just a few cars away from Ty, so we ended up walking together the VIP tent where I was supposed to be meeting up with Heather.

The warmers didn't do much for me, since I'm a midget, but I appreciated having coffee, my own set of port-o-potties and bag check. Around 5:30 Heather shows up, but she isn't allowed in the VIP, so we just talk over the fence. Apparently Mo also had VIP and she joined us shortly after. Right around 7 (when the race started), I checked our sweatshirts and we headed over to the start. Dave managed to see me from his corral and we got a selfie together (only time I saw him all day). 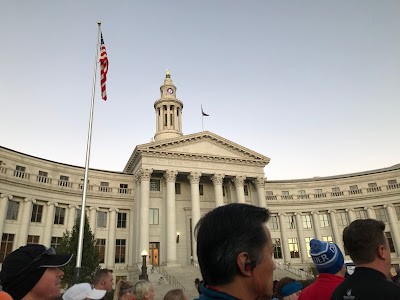 I was supposed to be in corral 9, but we probably started earlier around 6. About a minute before we crossed the line I realized I had been so busy enjoying my VIP experience that I had forgotten to eat my Honey Stinger waffle, so I shoved it in my mouth right before we ran. Thankfully, I have a stomach of steel and it didn't bother me at all to eat 30 seconds before running.

Last year I had completely lost it around mile 6, so the goal was to keep it together the whole race. The first three miles went really well (and FAST for me). The course seemed just a little different, like it does every year.
We came up on the Roost aid station around mile 4 and I gave A a hug (and Carol and Nikki) and Lisa - who got this cute picture of us: 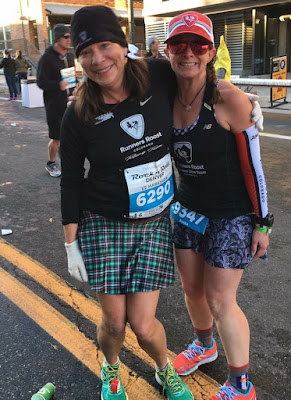 Maybe I'm biased, but it really is the best aid station! It was soooo cold, but my hands were finally warm enough that I took my gloves off. Any time we ran towards the west the wind blew in our faces and it was freezing.

Somewhere around mile 5 was when I finally had to take a walk break. Not for the "normal" reasons, but because my right ankle (the one that has been bothering me since Dirty 30) was aching a bit. Oh, and I was tired from running soooo fast.

We were running down Lincoln and saw Jeff and then we turned up 17th (the only "hill" on the course). This is always my favorite section because we are usually there in time to see all but the first few people running in to the finish. We saw Eric shortly before we turned onto York to head into City Park.

The park section seemed to go on FOREVER this year - probably because we didn't exit at the same part that we have in the past. We ran back onto 17th, this time running all the way to Colorado Blvd. The best part about THAT course change was that we no longer had to do the weird loop by East High School. I've always hated that part. 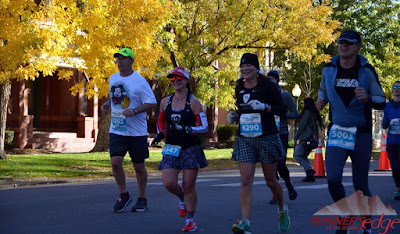 Unlike last year, I didn't need a break during the last mile and a half, although I really really really wanted one. We turned onto Sherman and did our little run past the capital (where we saw Andy and Melissa) before we finally had saw the chute. The course of course measured super long for me and I wasn't even super disappointed that I missed my goal of sub 2:20 by a minute.

Weirdly, I was finally "hot" right after crossing the finish line (where we saw Ang and A). We socialized with groups of people on our way back to the VIP tent where there was tons of food waiting for us (and mimosas and "beer"). I would have been fine eating an going, but Mo and A talked me into staying "until they kick us out," which I finally put an end to around 11:45.