Tuesday (15,685 steps) - Since it was a holiday and I ran twice on Monday, I did not do the video of the day. So in the morning I was treated with Monday's video - a butt/thigh with HIIT cardio thrown in. Dead. Had to double up for the day to get caught up on the schedule. Luckily it was a pretty fun upper body strength / yoga video. Exhausted.
Wednesday (17,152 steps) - HIIT cardio and abs. This was one intense workout. My abs hurt, my legs hurt, well... everything hurts (I guess that means it's working?) It's called "abs on fire" for a reason. I left work early because I finally FINALLY got my new place!!! A busy night of starting to move the smaller things.
Thursday (26,956 steps) - Cardio intervals and upper body. Turns out that I probably could have skipped this one as I spent the day moving furniture and boxes and got a pretty good workout.
Friday (22,306 steps) - Skipped the morning video. Got the most sleep I've had in weeks and was way too exhausted. Took A to school and then spent the rest of the morning unpacking and putting together A's bookcase.
LONG DAY. We had pizza Friday for the first time in months and spent the night in our new place. A long time coming.

Saturday (39,905 steps) - Ran the Arvada Harvest Run half marathon. The race used to be known as a 9/11 Remembrance race, but with it coinciding with the harvest festival and parade the name changed. TOUGH race for me, exhausted with all the moving. 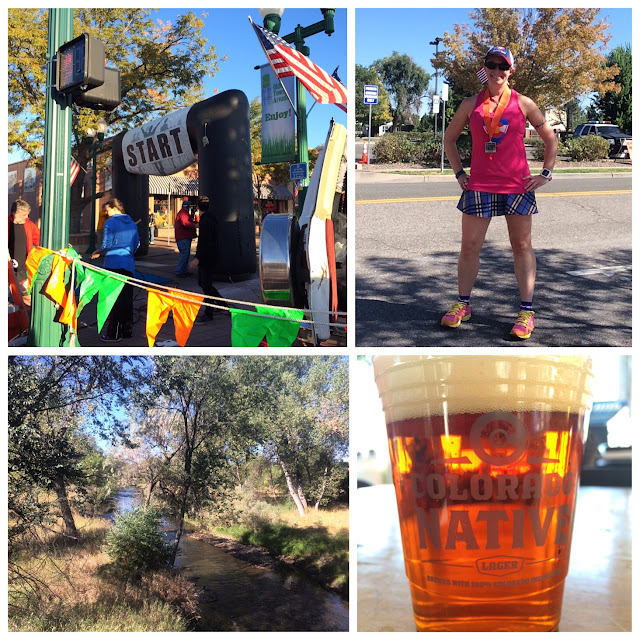 Went home for a quick shower and then took A to a birthday party. After that another quick drive home to unpack for a bit and get ready to go see "The Book of Mormon" with Jessa. We went to dinner and had a great time. Such a funny show if you haven't seen it.
Sunday (20,600 steps) - Also known as the day of unpacking and trying to get everything put away. Only left the house for groceries and a few random items. Was up well past midnight trying to get everything put away, which sadly, I didn't get finished. Too much stuff!!
Monday (20,209 steps) - Rude awakening having to go back to work. And way too tired to do my video in the morning. Did a HIIT cardio and butt/thigh strength video - which I really liked (with the exception of the "oz" jumps). More unpacking, cleaning and organizing - I was up until 1 am!
Stats: