This was going to be my fifth year running the Bear Chase. This was, however, going to be the first year that I was not running an ultra distance. With a 7 am start time, I wanted to be out the door by 5:30 as the exit for Morrison Road gets pretty backed up when there is an event. I was sort of out of it in the morning, so exhausted from the day before. By the time A and I got out the door it was closer to 5:40. However, there was no traffic and we were parked just a few minutes after 6.

Dan was volunteering at the parking lot and agreed to hang out with A while Heather and I raced. I met up with Heather and we headed over to the start line. By the time we cycled through the bathroom line and took a few pictures it was time to head out. 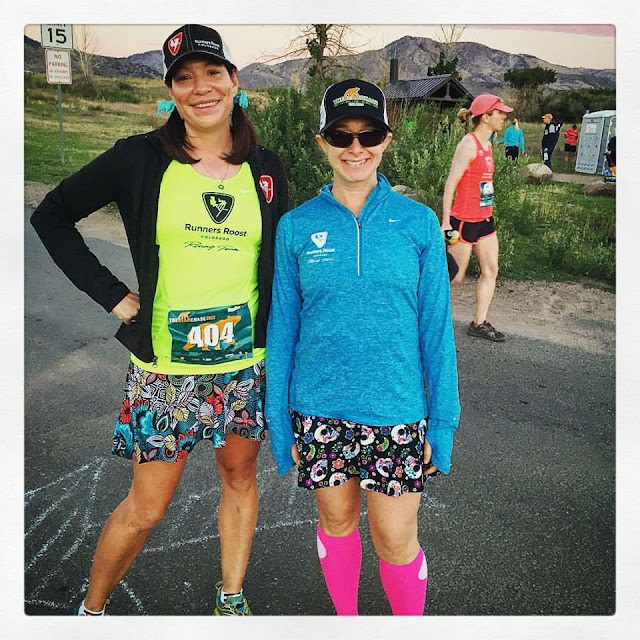 Plan was to start in the back so that I didn't start out too fast. Heather fed into the conga line a bit earlier than I would have liked so started off a bit uncomfortable. The loop for the half marathon is the same big loop that the ultra races do, but to get it the half marathon distance we did this weird half mile loop around the parking lot. There was a lot of bottle-necking early on.

Due to all the rain that we had this spring the race had to start at a different location (although the course itself was the same. We moved onto the trail into single track. Less than two minutes later my calves were already cramping past the point of comfort so I had to jump off the trail to try to loosen them up, losing Heather very early on.

The slope on the side of the trail was too steep for it to be comfortable to walk so I did some quick stretching and waited for a break to jump back in.

I tossed my gloves at one of the first trail markers. I don't know what I was thinking - there was no way it was cool enough to need those.

My legs were very tight the first few miles. I was hoping to catch up to Heather, but there was no way that was going to happen. So I decided to just take it easy and hope to have a decent finish. 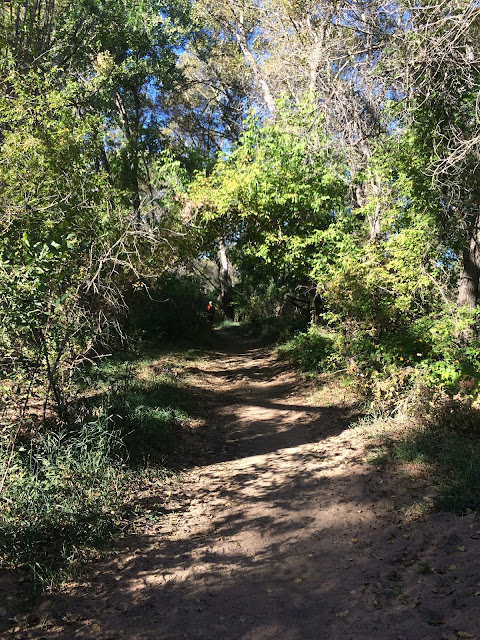 The one nice thing about the modified course is that we would be heading up Mt. Carbon much earlier in the day. There is zero shade on the base of the "hill" and it would be nice to get that part out of the way before it got too much warmer. 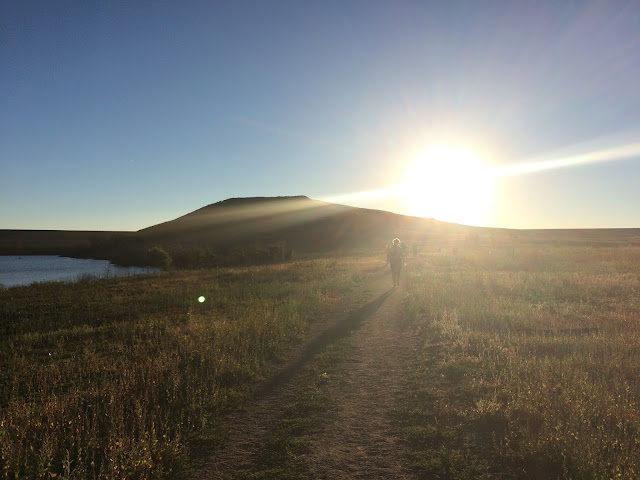 I saw Heather when I was starting the ascent and power hiked up to the top. As usual, the view from the climb was really pretty. 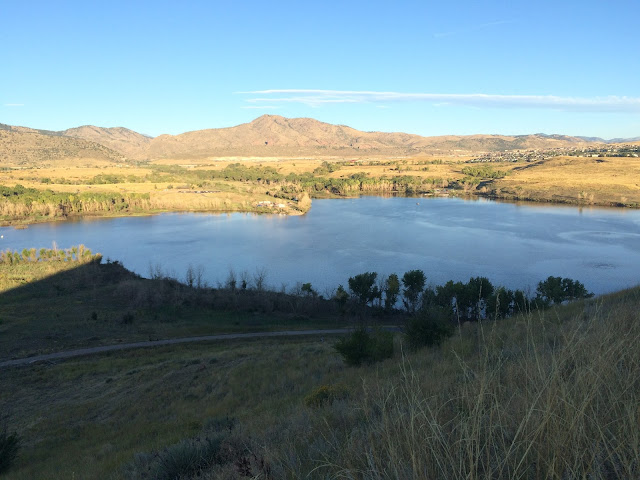 The back side of decent was great, like always. I managed to pass a half dozen people on that section and even skipped stopping at the aid station because I had barely touched my handheld. The section with the water crossings was nice and cool. 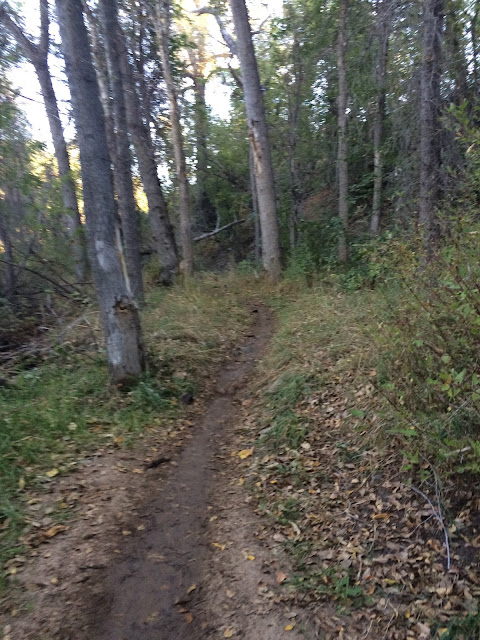 So many people were stopped on the side of the trail taking off their shoes and putting them back on after the river. Uh. Did you know that there are three crossings and you are wasting a lot of time? Oh wells. I passed another few people in this section.

Jogged most of the section next to the golf course and stopped briefly at the Fox Hollow aid station to take off my shoe as I had gotten some mud in there from the crossings. The section heading into Cattail Creek is my least favorite. There is a big climb and the course runs right along Alameda. The mountains are pretty, but the course in this part is exposed and HOT. However, it is mostly flat so I ran a bulk of this section. 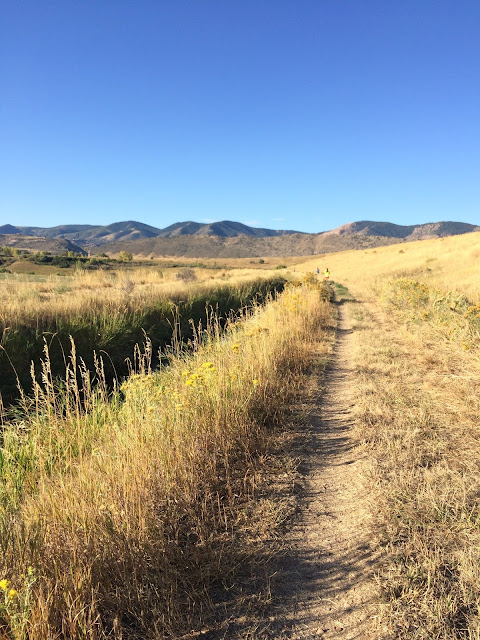 The hardest part of the race was knowing that when I got to the Cattail Creek aid station that I was not "almost done." I did the climb up "mini Mt. Everest" and did a lot of run/walk until the nice section of downhill heading into the boat ramp aid station. I topped off my water bottle and headed into the last three miles.

It WAS nice to not have any major climbs at the end. My legs just felt like LEAD after having run the day before. I passed a couple people, but I had to walk more than I would have liked. 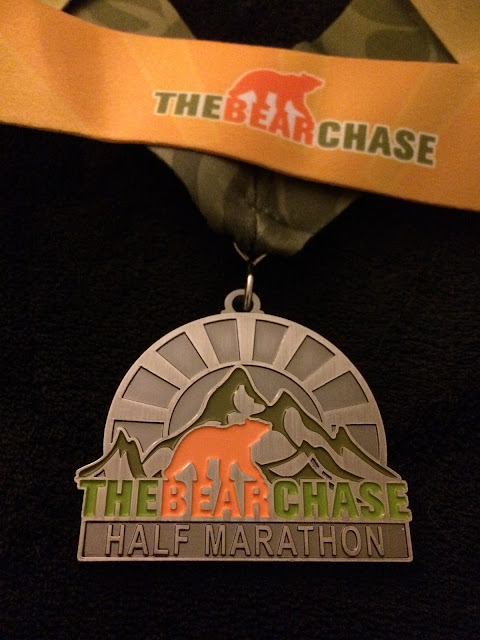 After I crossed the line I met up with A and got my beer. It was my teammate's birthday, and she brought Jell-O shots for all of us. It was pretty great to hang out at a finish line and not have to rush home right after. 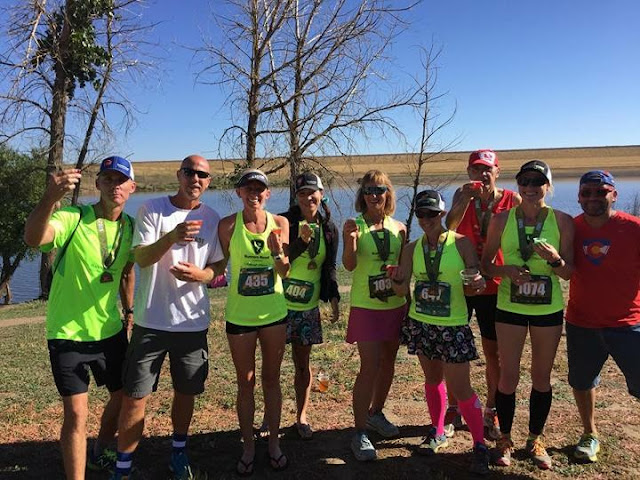