So I was surfing Facebook late one night when I was having trouble sleeping. My good friend and Runner's Roost teammate, Heather, posted that she was looking for another person to run Ragnar with them in New Mexico. I was interested, but knew that I would have A so I didn't think that I would be able to do it. She said kids were welcome to come so I committed to be on team "The Running Dead" assuming I didn't have any major scheduling conflicts at work. My attorneys were find with me taking Friday off, and I called A in from school.

My dad dropped off A at my office so that we could head down to New Mexico right after. This was a bad idea. It's like I've forgotten that Denver traffic is THE WORST. It took us an hour just to get to Ikea, which is something like 10 miles away. Shortly after getting to Castle Rock (about 25 miles away), it started to rain - pretty heavily. We stopped in Colorado Springs and went to Hu Hot for dinner. I was thinking that we had missed a bulk of the storm as it had stopped raining by the time we were done.

However, I was wrong. As we got closer to Pueblo, the rain got heavier. It was super dark and my wipers were going as fast as they would go and I could barely see. I was cruising along at an uncomfortably fast speed of about 40 mph. I had A call my dad to see where an affordable hotel might be and decided it was best to just stop for the night. We stopped in Colorado City at the Days Inn, about an hour north of the New Mexico border.

We got up at 5:30, giving us enough time to get dressed, load up the car and grab a quick breakfast in order to be on the road by 6:15. We had to make one stop in Trinidad to buy bottled water, and then we were on the road again. We arrived in Angel Fire just after 9, in time to see the fog covered ski slope that was the backdrop for our run. I found our team camp with no problems - it was the ever so wonderful theme "The Running Dead" and was decorated like the zombie apocalypse. SO FUN. 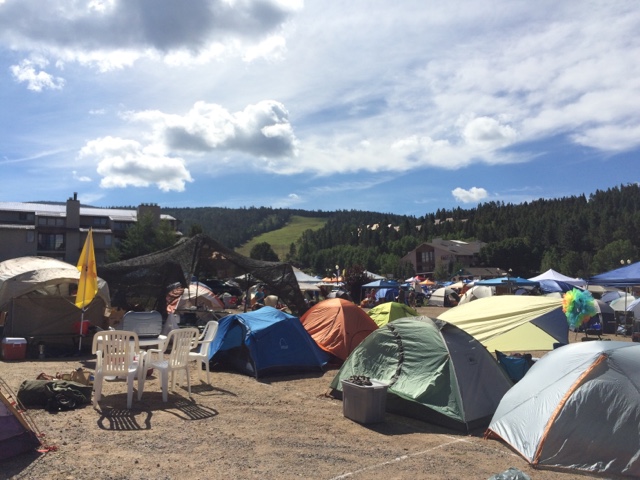 I was to be the leg 1 runner and still had a while to go. We sat around and talked, decorated our team shirts with fake blood, ate some lunch and drank a beer. Headed over to the start line for my 1:00 pm wave start only to find out the race was going to be delayed because of lighting. Arg. Headed back to the camp. Ate more. Around 2:00 there was still sketchy weather and thunder/lightning so the race was postponed ANOTHER HOUR. Sigh. 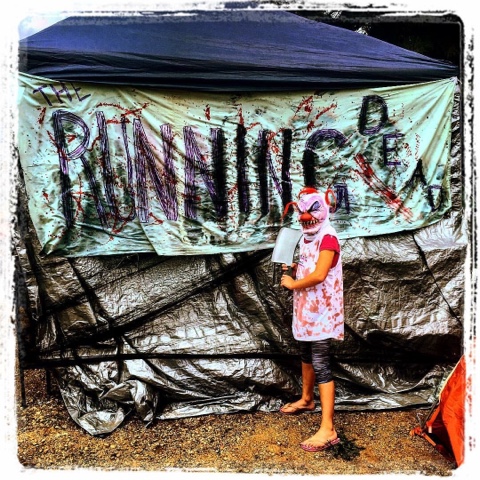 
Finally, at 3:00, we were off. Due to the postponement there were quite a few of us starting at the same time. Even running a sub 10 pace (which really is the fastest EVER for me lately), I was dead last heading out for the "easy" loop. The first mile was on road and paved bike trail with a gradual downhill. That part WAS easy. However, I quickly overheated with my long sleeves, and I had to strip on course to get the top off as the sleeves were too tight to just pull up. There was a gradual uphill until the course moved onto the trail. 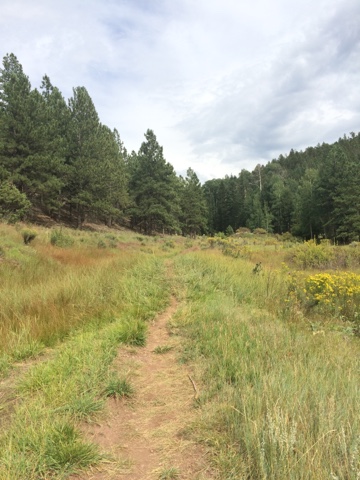 It was really pretty, but steeper than I expected. The green loop merged with the yellow but it wasn't congested or crowded. Steep climb towards the end of mile 3. Finally, we were at the top of the hill and there was a lovely downhill that I cruised down, jumping over ditches (glad I ran this section in the daylight first as all loops would run this last half mile). There was a weird section about a quarter mile out involving stairs and running on a boardwalk type surface before heading into the chute. I handed off to runner 2, Shelby. (Thoughts about the green loop? Not exactly what I would call "easy").

Headed back to the camp to for a beer. Most of the team stayed in the village. Probably 30 minutes after I stopped running, the rain and hail started. It was coming down so hard and so fast that the camp began to flood - there was seriously a river running in between our camp and the one next to ours. We thought for sure the race was going to end up getting canceled because the weather was so awful. Turns out the race was going to proceed as long as there was no lighting. 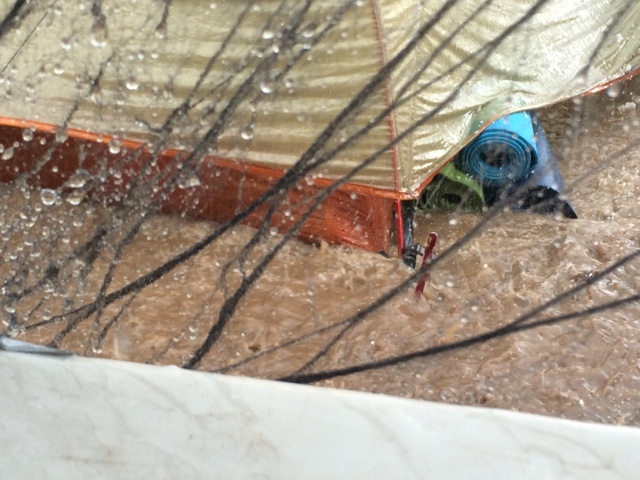 Spent lots of time just sitting around and eating. A participated in the "air guitar" contest. Sadly, she didn't win the overall prize, but she did get a stainless steel Ragnar pint cup out of it. I decided to lie down and take a short nap before my next leg since I was going to be running much later than originally planned.


I was awoken by A hovering over me telling me to get up. I really didn't want to. I was so tired. But I dragged myself up and then went to sit in a chair, looked up, and saw Dan. That's who was handing off to me! He had run WAY faster than expected and I obviously wasn't there. Luckily I had all my stuff ready and I ran to the transition tent and headed out, half asleep. There was a full moon but it was obviously SUPER dark, and this was my longest and most difficult leg. The first half mile or so was on the road, and then it moved onto the trail. 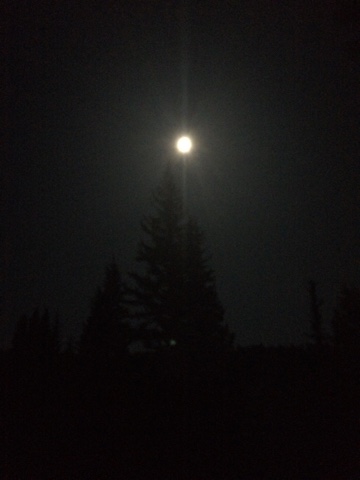 I was completely alone, I could not even see other headlamps. The trail didn't seem too technical and I'm assuming it was pretty but it was dark so I have no idea. The first 3 miles was all uphill so there was very little running for me.

When I hit the three mile mark I knew it was mostly downhill so I ran as much as I could. I haven't done much running at night, and certainly not on trails, so this was fun. I had a great time on this loop. (And looking at my Garmin information - turns out my sprint into the finish was just that - 7:22 pace O.o)

Headed back to the camp and everyone else was in bed, except Dan. He stayed up with me while I had a few beers and then I headed to bed around 2. Was woken up fairly early, maybe just before 6 because everyone was starting to wake up.


I wasn't feeling all that great so I decided not to eat before my run. I spent some time in the village waiting for Dan to arrive. He took a lot longer than expected, so I was wondering if he even ran the correct course. I headed out for my last leg of the race just before 9:00. The first mile or so wasn't too terrible, but then the climbing began. It was substantially more difficult than I thought. It was more technical than the red loop with a lot of roots and rocks. And the climbing. So much climbing. It was steep and I was tired and it was already hot. There was very little relief from the climbing, not many downhills or flats. 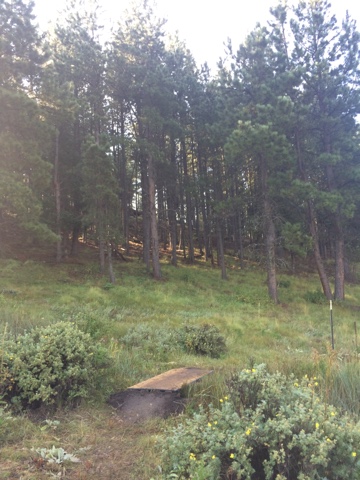 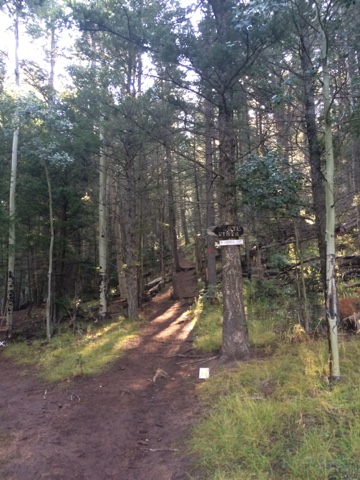 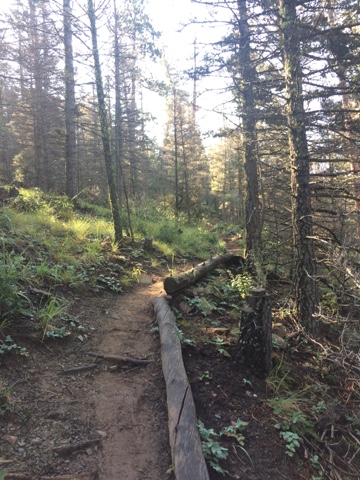 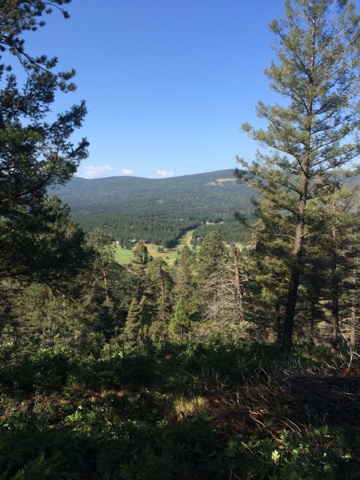 There was a small section of downhill and then the course merged with the green and I was back in familiar territory. Bombed the downhill again and was super happy to be done. 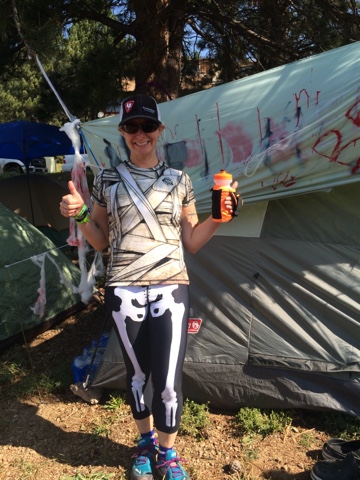 Due to the late start and slower running (mostly because of trail conditions), our team was in danger of not finishing in time, so we had to "double up" our runners. Good - because then we would 1). finish and 2). not finish so late that I would be driving at night again.

A and I went up the hill to the Lodge and got some breakfast (I had a delicious ham/cheese and green chili quiche and A had a breakfast burrito). We started to pack up our stuff since were planning on heading out right after the team finished. Spent some time in the Elevated Legs after Heather and Dan went out for their last leg. Not more than 15 minutes after they headed out the rain started. AGAIN. A and I sat in the car and only headed over to the finish when we thought they might be finishing. They came in - cold and soaking wet. We got our team picture taken and then, of course, it stopped raining. 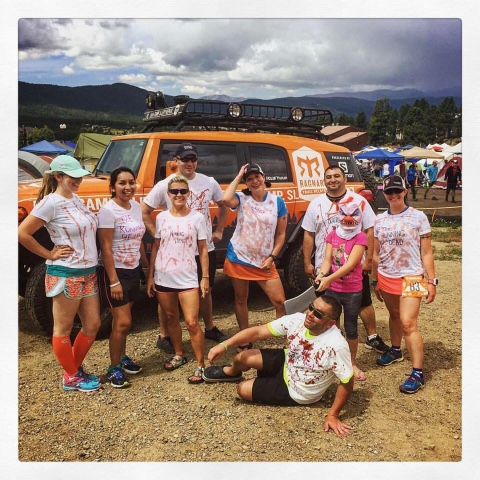 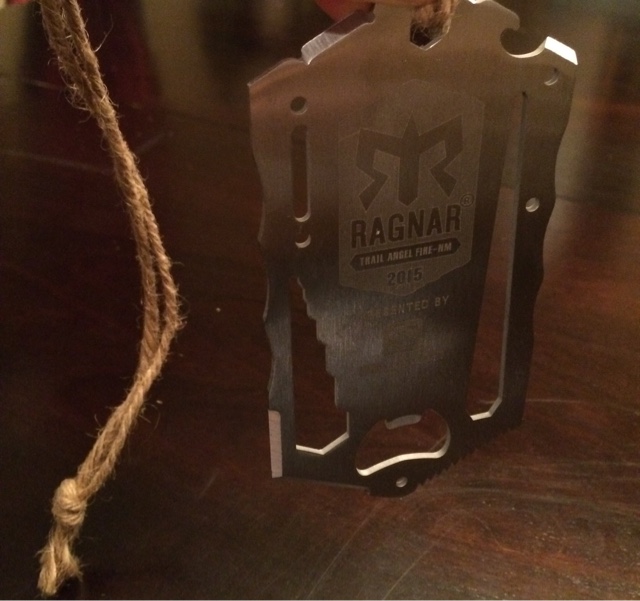 We helped tear down the camp and then headed out around 3:00. The drive back was just about as adventurous with MORE torrential rain. We stopped in Pueblo for dinner (burgers), and got home around 9:00.