Tuesday (27,156 steps) - Cardio kickboxing. I gotta say, I don't like these. I don't have much coordination and I feel like I am "wasting" the exercises by not doing them properly. I used to enjoy the turbo kickboxing class at the gym, but these weird videos aren't for me. Met up with a couple of Craigslist who purchased my roll top desk and then went back to the doctor to get my injection. All this before 8 am! 4 slow/progressive miles on the treadmill. CIM is coming up quick and the thought of doing double digit training runs is daunting... 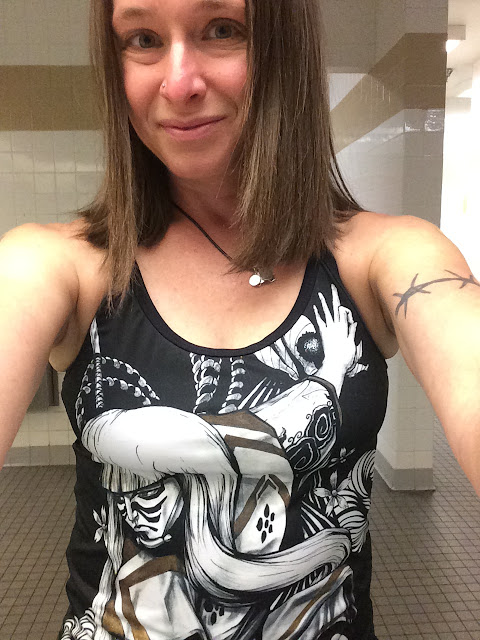 Wednesday (18,035 steps) - HIIT cardio & total body toning. Not sure what exercises I did earlier this week that had me feeling sore (inner thighs) and overall exhausted. J/K what I said recently about the videos not being "quite as hard." A and I went to run club (for the first time in a few weeks). Had a hot run with A, Lisa and Heather - great way to spend the evening.
Thursday (18,219 steps) - Cardio video that left me embarrassingly sweaty. Womp. After work we went to A's curriculum night at school (fancy new name for back to school night where they also corral you in the gym to be brainwashed into joining the PTA). We then went to the furniture store to put A's bed on order (since we sold her bedroom set when we moved - she is super pumped to upgrade to a more "adult" bedroom set).
Friday (16,530 steps) - Total body toning strength and HIIT cardio. I have done this video before (maybe a year ago?) and I like it. Not too many reps, and in the standard ABAB format, and then 20/10 x 4 HIIT sets. I swear time stops when you are doing 20 seconds of jump squats though. I added this one to my favorites and I will do it again. After work we went to dinner with Jessa and Jackson at a little Mexican restaurant down the street - it was tasty.
We stopped at the grocery store to pick up ingredients for my project - red velvet brownies. Thankfully, Jessa is an expert baker and she assisted me with making the delicious treats to take to Nate's birthday party.
Saturday (29,501 steps) - Up early for the American Heroes Run (recapped separately). On the way home we stopped in Boulder for a few errands. I had to stop at Sephora for some new lip gloss (if you haven't tried Buxom, you are missing out - it is the most fantastic gloss ever invented) and to Lululemon. Like most brands, Lulu discontinued the shorty shorts (best shorts ever to wear under skirts - they have tons of pockets and don't ride up). I had seen a pair online that looked like the pockets might work but the reviews were mixed so I wanted to try them in person. I ended up getting two pairs - one of which was on clearance - SCORE! A and I grabbed a quick Cuban sandwich for a small lunch and then met Heather at the Newton store. A talked me into getting her a pair of trail shoes (her first, and also her first pair of women's sized shoes - size 5 O.o). Then we made a quick stop at Flatiron's Running where I picked up another pair of INKnBURN robot capris for A in the next size up. Really happy that they brought in the kid's line! I hope these fly off the shelves so more styles will be made for them. Although at this point, A is now ok wearing women's XS tees, so it's not as urgent as before.

Went home and took a shower and then waited for Jessa and Jackson to get back so that we could drive up to Heather's house (the other Heather) in the mountains for Nate's 18th birthday BBQ. It was a ton of food like always, and I always love seeing all my friends.
Tried to stay up and watch a movie but was too exhausted.
Sunday (9,009 steps) - Slept in until something like 8:00. After a delicious breakfast of pancakes and peaches we went to my parents house to pick up a few things and then Target for a few others. (Which of course meant that I left with a lot of things I did NOT need). We also stopped by the animal shelter and looked at cats. My mom thinks Batman Sour needs a friend to keep him company as he seems very lonely at their house. I don't know about that, but figured it couldn't hurt to look? We went to Sprouts to pick up stuffed chicken for dinner. In the meantime, we needed to install her storm door. The box claimed it could be done in 45 minutes. Spoiler - even with the assistance of a neighbor it took close to three hours. Ended up eating really late, and by proxy, going to bed really late. Exhausted.
Monday (34,474 steps) - Up crazy early (after not sleeping at all the night before) for the Highlands Ranch half marathon (recapped separately). Was home by 10:30 and treated to a fried egg sandwich (yay, because I was starving). I tried to take a nap but couldn't sleep. So tired and exhausted. Quick lunch and then after watching a marathon of Tiny House, Big Living, A and I left to go to the Salomon fun run & BBQ at Bear Creek State Park. The turnout was HUGE and we had a great time. We started with a 2ish mile trail run (man, my legs were DEAD), and then A participated in the scavenger hunt (which required more running). There were burgers and beers and lots of friends. This was a lot of fun.
Got back home around 7:30 for second dinner of stir fry, and then we watched the season finale of Walking Dead to get us pumped up for the new season starting next month.