Saturday, June 6
Frisco, CO
Half Marathon #133
Colorado Half #66 (on 6/6? that's creepy)
Weather - pretty perfect
The Run the Rockies half marathon was planned as one of our only double weekends because it is one of the busiest race weekends in Colorado.
The race started at 8 am near Copper Mountain ski resort at 8 am, about 75 minutes away. We had to get there early enough to pick up our bibs and take a shuttle to the start since it was "sort of" an out and back.
We arrived at about 6:45 at the town hall in Frisco and easily found parking and where to get our stuff. Now that I no longer take race shirts it's nice to only have a bib to worry about. The indoor bathrooms were closed so we used one of the three port-o-potties outside. Sat in the car until about 7:20, used the bathrooms and then took the bus to the start. It was all very efficient and organized.
We were dropped at the Conoco station off the frontage road and it had indoor bathrooms for us to use before the start.
There were tiny corrals at the start line. (Which, by the way, I'm not entirely sure where it was, I just started my watch when everyone started running). 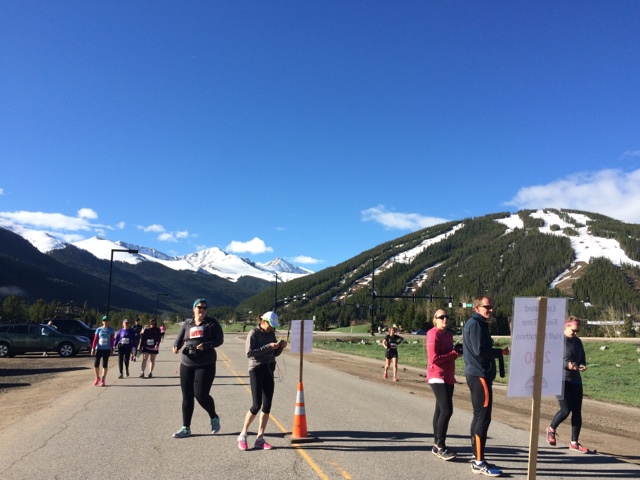 The course was going to be mostly downhill for the first 5.5 miles until we got back to the town of Frisco. The course was only on the frontage road for maybe a half mile until we got onto the bike path. WHAT A PRETTY AREA. Due to all the rain there were some areas that were partially flooded off the path, but there was no mud on the course.
I was really hoping that just by taking it easy I would have a good race. Turns out the fire calves would start screaming about a mile in. Grrr. I took a couple fairly lengthy walk breaks in the first 1-2 miles. 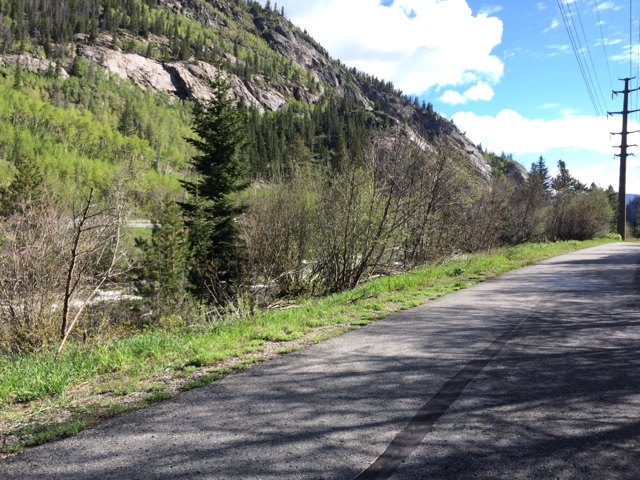 Somewhere around mile 2 I started to feel better and ran. I didn't even stop at the first aid station since I had my handheld. I had took my gel around mile 4. I was passed by the first 10k runner about a half mile later (for reference, the 10k started 30 minutes after we did). 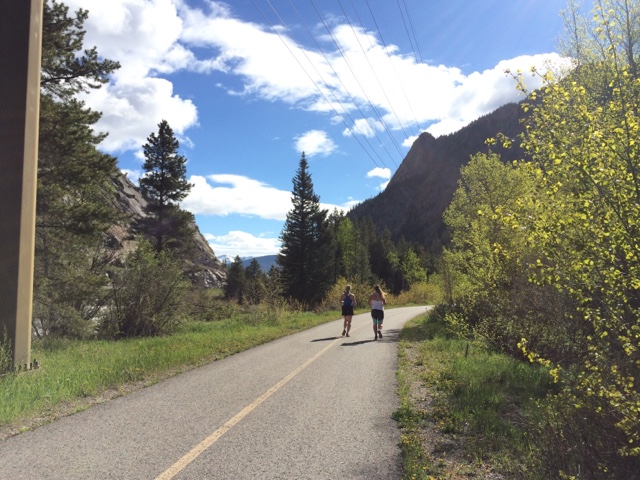 Luckily I only got passed by about a half dozen of the speedy 10k runners. We turned right and headed out towards the high school, which was apparently the turn around at about mile 6. We did not hit the second aid station until about mile 6.5. I was glad I had my handheld as that was pretty long to go without water. 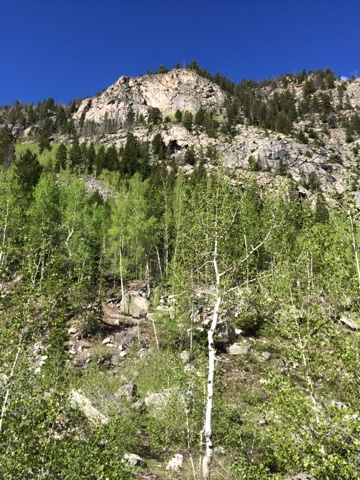 The course was JUST GORGEOUS. Just outside of town the people who live there actually drive on the bike path, so that was weird to be watching for cars there. From talking with people on the shuttle to the start I knew there would be some rollers on the second part of the course, with a biggish hill around mile 10. By miles 7-8 I was already pretty tired.
﻿ 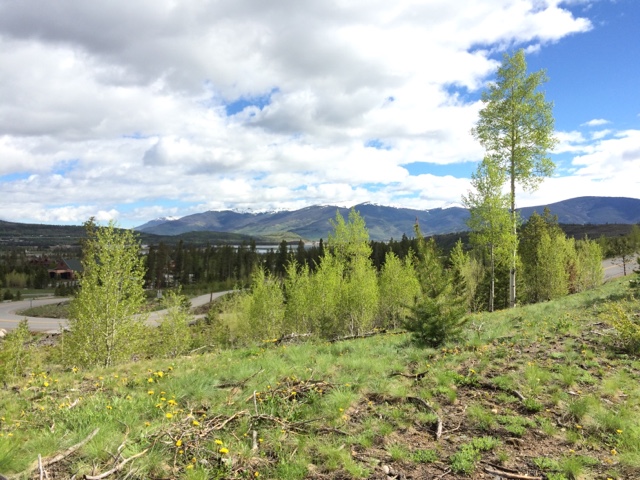 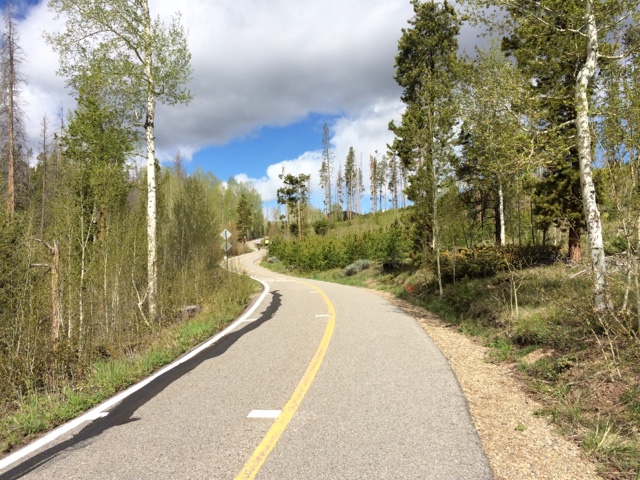 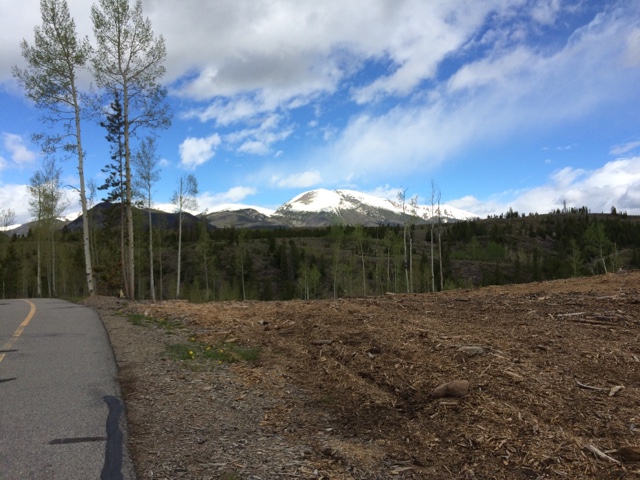 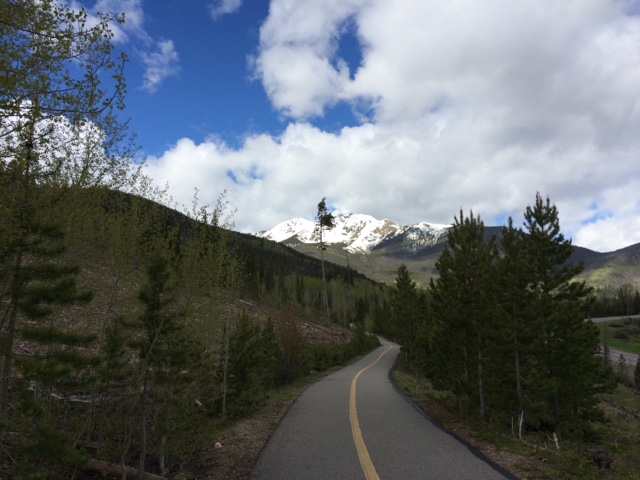 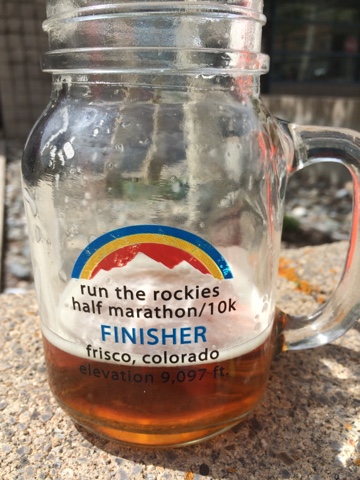