Sunday
I had to be in Moab by 6:00 pm to pick up my packet. My dad was planning on volunteering at the race for the first three days, so we were taking separate cars. I had a few hours with A before dropping her off with my mom around 10:45 am. I met up with my dad in Dillon for lunch at the Smiling Moose. Drive was mostly uneventful with very little traffic and some rain near Vail.
I arrived at the Gonzo Inn for packet pick up around 5. Showed the staff all my required emergency equipment, spoke briefly with the doctors and picked up my bib and "journal." My dad showed up right as I was finishing up and we went to the Moab Brewery for burgers and a beer. My dad was attending the volunteer meeting at 6:30 and my pre-race meeting was at 7:30.We had a LOT of information to absorb - mostly from the medical staff. Bed around 9:30.
Monday, Day 1
We were staying at the Super 8 down the street and had a quick breakfast before meeting up at the Gonzo Inn at 7:30 am to load up the trucks. Shuttles to the start line near Loma, Colorado left the hotel around 8:00. It was a nervous ride out that took close to 2 hours. I sat next to a woman, Becky, who WON the Trans Rockies stage race, and she brushed it off like it was no big deal. Um, yes it is!!!
We arrived at the start line just before 10:00 am. It was already pretty warm. We took a few pictures and then after a few words from the race director, we were off. I spent the first six or so miles running with Cindy. The first miles were roughly on the course that we ran in April at the Trail Running Festival (only in reverse). We were told to use our daily course maps and journals to avoid making any wrong turns. We nearly made a wrong turn fairly early on, but luckily I double checked my map and crisis was averted.
﻿﻿
﻿
After the first aid station around mile 6 Cindy started to hang back a bit and I figured I should run as long as I was feeling ok so I pulled ahead a bit. We almost missed another turn and were saved by Gene who was using the GPS Gaia app. (Looking back, this may have been worth the $20 investment).
I was doing mostly ok - running the flats and downhills and hiking the climbs. The heat was actually not bothering me too much. If I had to guess, we maybe hit high temperatures in the upper 80's or low 90's.
The views were amazing. There were some switchbacks around mile 11 that took us all the way down to a bridge... and then we had to climb back up. By this time it was FREAKING HOT and I was struggling to get air on the climb. I felt like I was working crazy hard, it was hot and I was tired. After many false summits, I arrived at the top with Sheri in front of me and Cindy and Trish somewhere behind me. I was super happy to see the second aid station around mile 13. We moved off trails and onto a gravel road. There was a lot of downhill and flats and I didn't find this section too awful.
And then I made a STUPID rookie mistake. I was assuming that we were running about 20 miles. Somewhere around mile 18 I could see the flag for camp. I turned to the left as it looked like that was where the trail marking was pointing. After about a half mile I was starting to wonder if I had gone the right way. I could see the flag to my right and the road I was on was kind of winding away from it. when I realized the road was NOT going to connect on that end I realized that I should not have turned off the main road. D'oh! I called the race director to confirm that I was NOT on the correct path and then headed back. I still made it into camp with almost an hour to spare before the cut off but I was pretty annoyed that I had made the wrong turn about a quarter of a mile from the finish and logged over 2 extra miles. 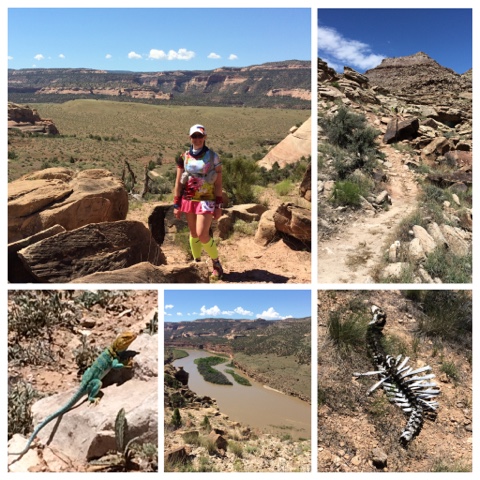