Friday, "Beach Day"
Thankfully, we had the day off on Friday to recover from our long day. My legs felt surprisingly good, but the blisters on the bottoms of my feet did not. We didn't have a scheduled wake up call but I can't seem to sleep past sunrise so I was up early for coffee and breakfast. I got another massage - in the back of our UHaul van. Classy! I took a walk down to the nearby creek and cleaned off my feet - the water was so clean and clear.
After lunch most of us took a shuttle down to the beach. I had already taped up my feet so I didn't go down to the water. I spent the afternoon drinking PBR and dozing off in a lawn chair. This is the closest to a relaxing day off I probably have ever had. We had our slide show after dinner where we got to see all the pictures our awesome photographer had taken for the week (and videos he had taken using his drone). There were unfortunately not that many of me :(
At the race meeting we were told that we were going to be starting in waves the next day. The "slower" half of the field would be starting at 7:30 and the "faster" half would be starting an hour later. Somehow, I was picked to start in the second half, which meant I would be "losing" an hour of the cutoff time of 8 hours. INSTANT STRESS AND PANIC. Tried to get to sleep for the last night of camping, but I tossed and turned.
Saturday, Day 5 (Marathon Stage)
Even though I didn't have to get up early, I did - again, because I can't seem to sleep past sunrise. I was up having coffee and breakfast before most of the early starters. It was a bummer that I would not be starting with them - I would have loved the "cooler" temperatures as well. We saw them off and then there was really nothing to do but sit around and wait. I expressed my concerns about the cutoff and it was the general consensus that I was worried about nothing.
My blisters were not feeling much better but I hoped that I had taped them well enough that I could get through the 26-27 miles for the day in under 7 hours. You might be thinking - sure that's not that big of a deal.
The course for the day began on paved road - A SIX MILE CLIMB. No, really. It was almost 100% uphill for the first 6 miles. I did a run walk up some of the more flat sections but I really did walk most of it. I spent a few miles chatting with Gene - what an unbelievable athlete. The man is 67 years old and THIS YEAR ran a 3:08 marathon. He came in 3rd in his AG at Boston and 2nd at the London marathon. He said this week was his "silly fun" in preparation for his next 100 miler. I can only HOPE to be that active at his age.
I spent only a minute at the aid station to top off my water and then headed out - leaving Gene and Traci at the aid station. The views from the top did not disappoint and I was headed into 20 "mostly downhill" miles to the finish. 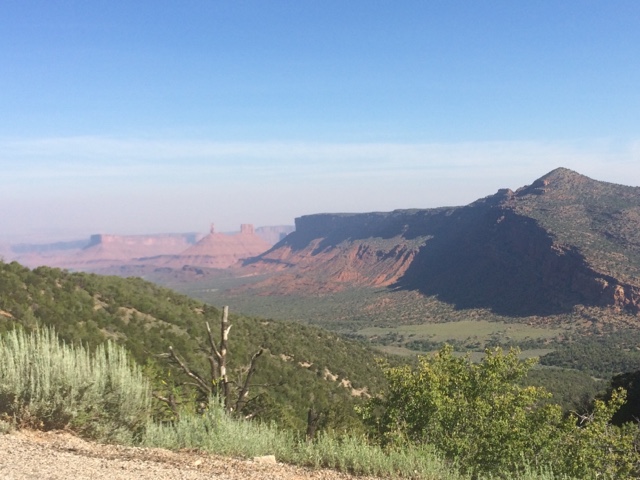 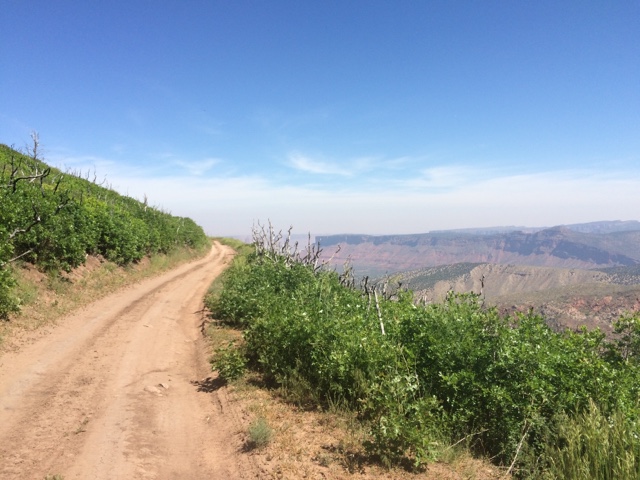 For a few miles we had blissfully "easy" terrain to run on. There were not that many rocks and it was downhill. I was so hot and tired from the week that I still did not run this entire section. I kept waiting for Gene and Traci to catch up to me, but I didn't see them. There was a confusing fork in the road that was made more confusing by the race director's instructions to not go the wrong way. Luckily I did NOT make the wrong turn, however, the Three Amigos and Fran did. They ended up going miles extra (and as a result, missed the evening cutoff). While I was in the middle of waffle and a walk break Sada and Jim came blazing by. They had also made the wrong turn, but as faster runners it didn't cause them to miss any cutoffs, just got in a few extra miles.
I made it to the water drop around mile 10 and Reid and Pete were there - wondering if I had seen the Three Amigos. That's when I found out they had missed the turn and even though they had started an hour ahead of me they were actually now behind me on the course. Such a bummer :(
We stayed on dirt for a few more miles and then moved to a nice section of paved downhill - easier on my blisters, easier to run down and MORE amazing views. 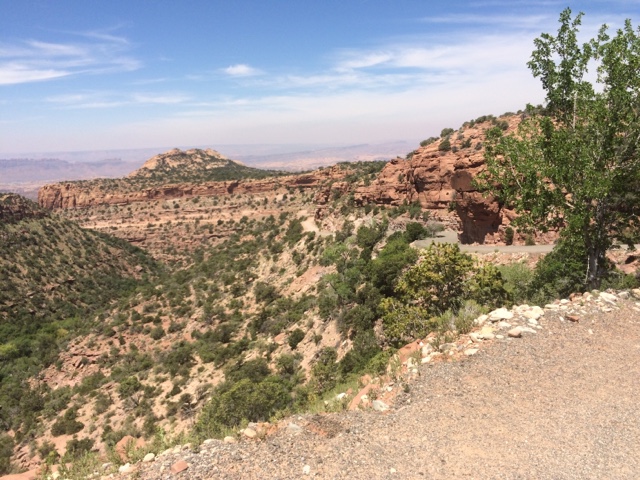 Traci caught up to me on the downhill section and offered to get a few shots of me - which was really nice of her. So yay, a picture of me that is not a selfie :D 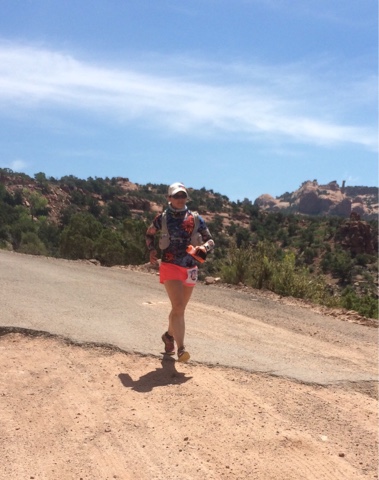 We arrived at the Porcupine Rim aid station where we would head out for a 2.5 out and back section. I filled up, but again, losing that extra hour I was worried about not making the cutoff so I did not spend a lot of time there. Porcupine Rim was TOUGH. It was some of the most technical parts of the entire course with slick rock, big rocky sections and of course, HEAT. There were also two sections where the course split and there were more wrong turns made, luckily, not by me. The view from this part of the trail was pretty cool, it seemed like you could see FOREVER. 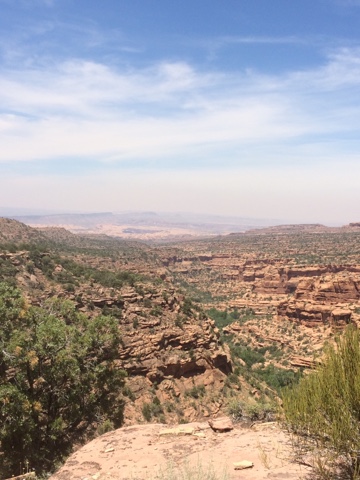 I saw lots of people on this section with it being an out and back, which was really nice. Pretty much the first time during the entire race where I didn't feel totally alone. The turnaround was unmanned so all runners grabbed a special rock to bring back to the aid station to prove they had gone the full distance. Thankfully, the rocks were small and I threw one in the front of my pack and headed back. I finally saw the Three Amigos and Gene. 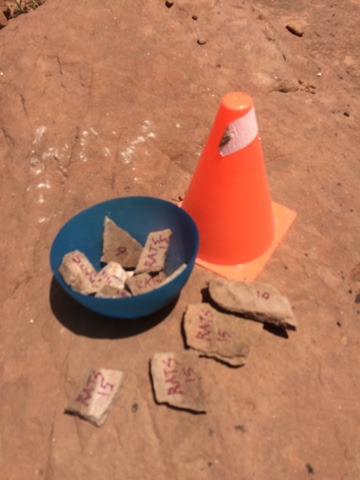 I got back to the aid station and for the first time, I had a really shitty attitude. I had about an hour and a half to run 6-7 miles. Again, not normally a big deal. I was stressed about the time, I was stressed about possibly not finishing by 3:30 and I sort of stormed out of the aid station. No way was I going to let lingering at the aid station waste more time. As I was leaving, I noticed Traci coming in - she had made a wrong turn on Porcupine Rim and was also angry.
The last six miles or so to the finish were all on wide dirt road. It was completely exposed and THE HOTTEST EVER. A breeze had picked up but that just felt like I was in an oven with the door opening and closing. It was so hot. So So So So hot. But at least it WAS downhill and I did a lot of run/walk. With it being a Saturday the road was "busy" with ATVers cruising up and down, kicking up dirt. That added to the fun. Traci passed me with maybe 2-3 miles to go although I had her in my sights most of the rest of the way. 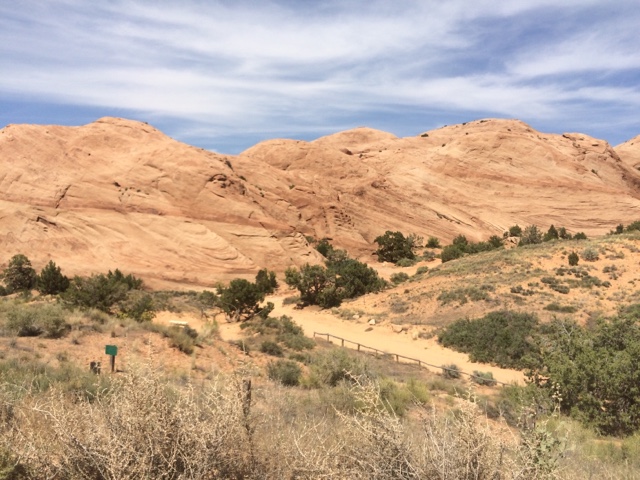 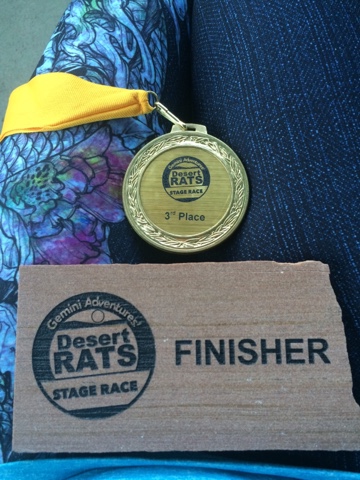 We were all supposed to go out to a "dive bar" afterwards but a few folks stayed back for various reasons. I was really in the mood for conversation and drinks and ended up staying out past midnight. CRAZY. Got the best night's sleep of the week (even if it DID cause me to be somewhat hungover the next day).

I'll do one more post (maybe) regarding the nitty gritty details - or feel free to ask if you have any questions.
at June 26, 2015