Thursday, Day 4
In years past the expedition stage was over 50 miles. Apparently this year there was a course change and we were "only" scheduled to run about 43 miles. The day was to start at 7:00, and it was SUNNY. Dewey Bridge was looming on the horizon as the start line. 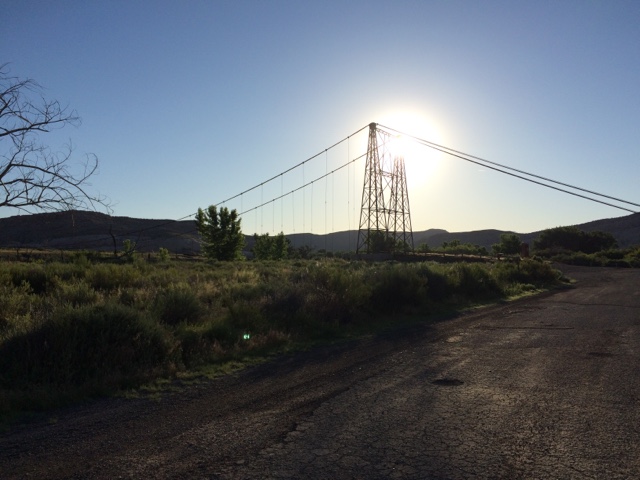 I had the same goal of running what I could and hope that I wouldn't be too hot and/or tired to make the afternoon cutoffs. There was some climbing right off the bat to the first aid station at just past 5 miles "Top of the World." I know there are some amazing views from there but the viewing area was not directly on the course so I cruised on through. 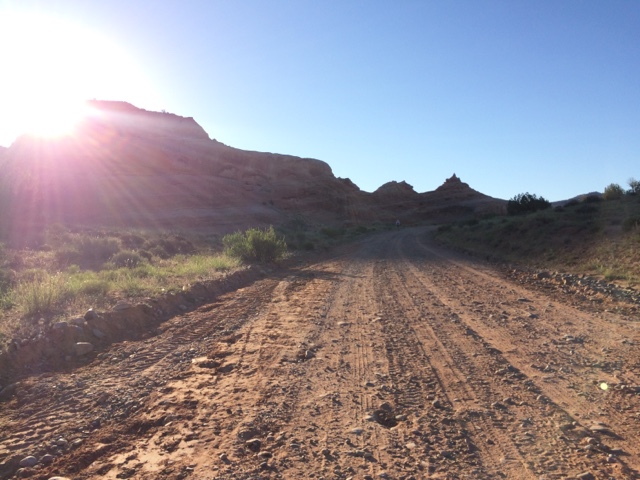 I could see the trail winding down a valley and snaking around some small hills. I knew by looking at the elevation profile that this day was going to have a ton of climbing. We spent a lot of the day running down a hill only to climb back up minutes later. 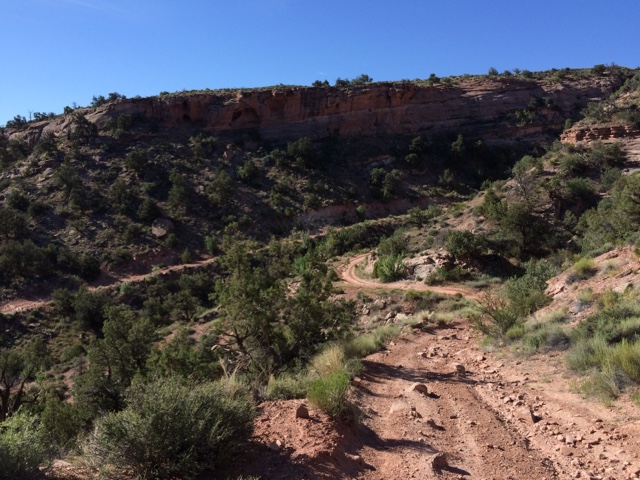 I stopped to take a selfie in a shaded section - and I'm glad I did. It was only going to get hotter as the day progressed. 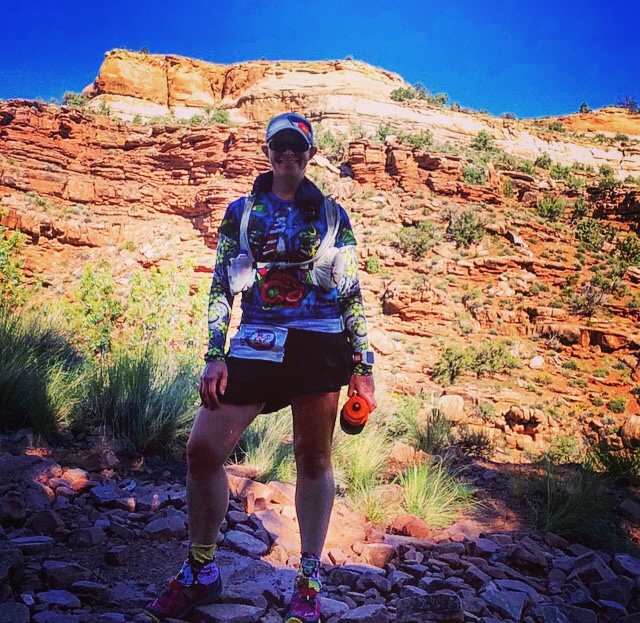 There were some nice sections that were runnable and then there were fairly steep sections with a LOT of loose rocks. These sections were the worst for me. Every single step I took I could feel like rocks jabbing into the blisters on the bottom of my feet. 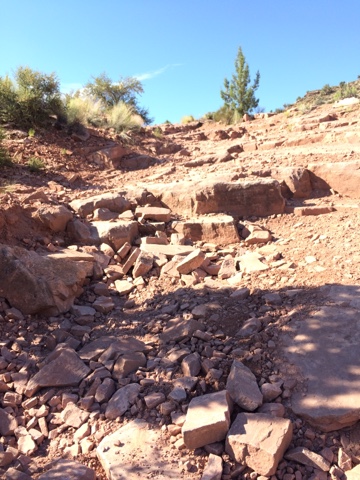 I encountered some weird rock sections that were almost like slick rock but not quite as hard of a surface. The "wavy" rocks were a bit tougher to run on as it wasn't level. The heat out on this section was horrendous. I was trying to conserve water as the Onion Creek aid station was about 13 miles after the first aid station. This was by far the most remote part of the course. 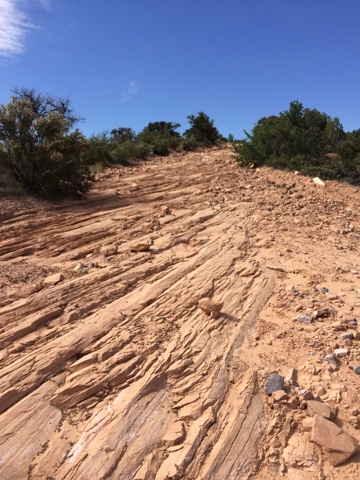 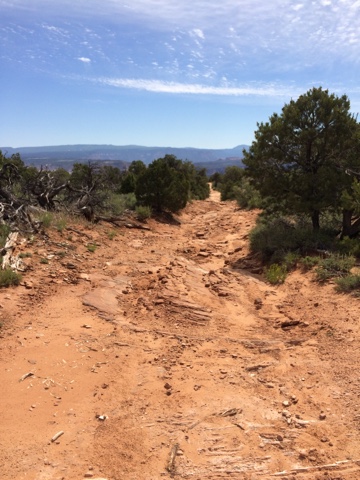 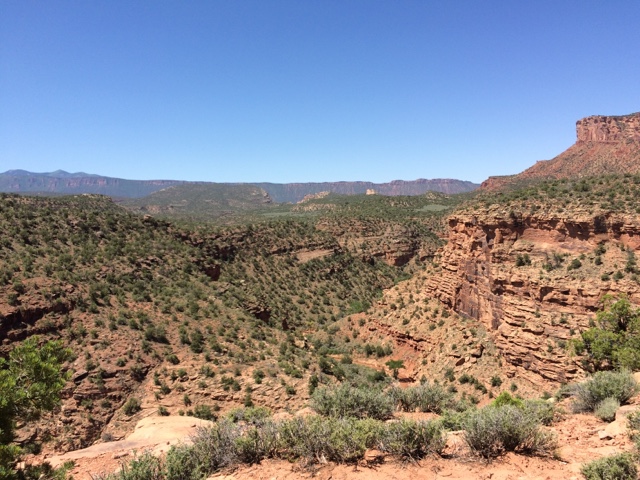 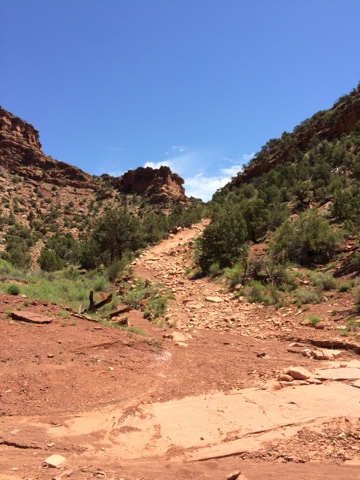 I'm not sure why I didn't take any pictures of the "Rose Garden." It's a funny name for a section of the course that is a steep downhill filled with rocks and boulders. The bike sweep said he wasn't even crazy enough to try riding down it.
I saw a piece of paper at the top that said something to the effect of "Desert RATS water drop top of mesa." I looked around and didn't see the water. Did that mean I was too "fast" and had missed it??? I WAS SO HOT AND THIRSTY. I looked over the Rose Garden and saw Gene hiking up a hill across the valley. OF COURSE WE WERE GOING TO ALMOST DIE GOING DOWN THIS HILL ONLY TO CLIMB UP ANOTHER ONE...
So I start climbing. And I'm thirsty. So thirsty. And so hot. I keep checking my watch to see how much further I had to go to the aid station at Onion Creek. FINALLY, once the trail leveled out to more of a runnable "road" I saw the water drop (about mile 17) and I almost cried tears of joy. It's crazy, I have never spent so much time thinking about water and worrying that I was going to have enough.
I spent a decent amount of time at the aid station, which was at mile 18 of the course. The tape on my blisters had started to come off and was balled up under my toes. Traci had DNS'd for the day and was hanging out at the aid station and offered me blister powder. Not sure if it helped or not but it was great to get the sand out of my shoes and the tape off.
I grabbed the sandwich I had made and started walking for the next section, which again, had a VERY long distance until the next aid station around mile 30.
There was more climbing (of course).
This section also had a lot of weird bees/flies that came up out of the ground out of what looked like anthills. That was terrifying.
Around mile 20 I was getting ready to go through a gate at the top of the hill and then I see Reid (the race director) drive by me in his truck. It's a rough trail but apparently he was driving all the way to the aid station. I was surprised that this was accessible by vehicle and why the race was not able to place a water drop if people could drive on it.
I would find out a mile or so later when I came across Reid by his truck, stuck. He was digging himself out by moving rocks around.
It was HOURS before he drove past me, I was probably closer to mile 25 and was finally starting to see the light at the end of the tunnel. It was so hot I was stopping every quarter of a mile to take sips of water out of my pack in the teeny tiny bits of shade. The views from the top of the mesa were pretty cool though. 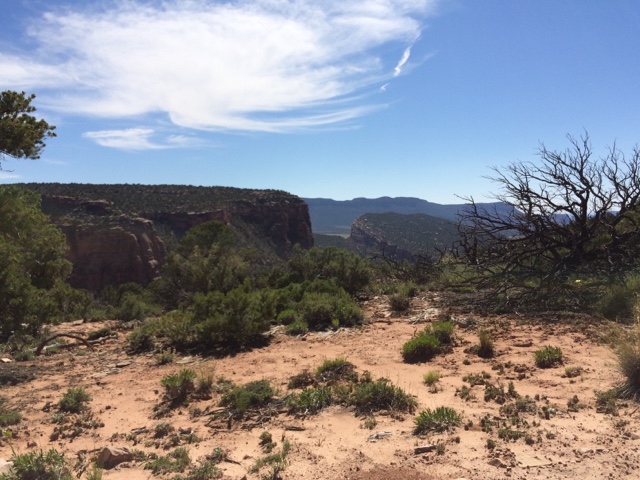 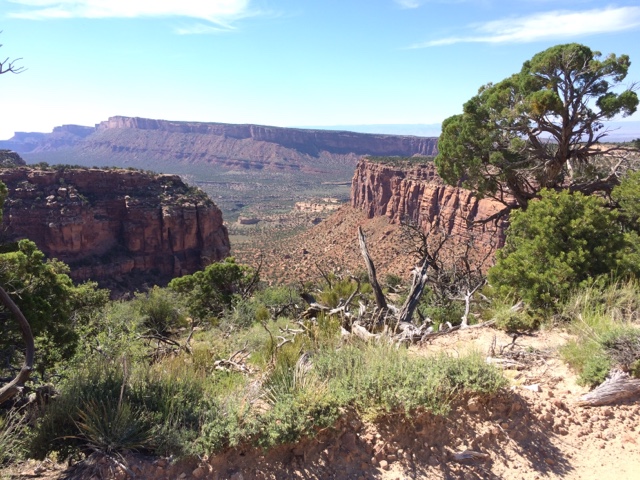 A group of ATV'ers came cruising by, kicking up dust and dirt. I would encounter them shortly, around mile 27, as they were trying to dig Reid out - he had gotten stuck AGAIN. I ended up on a better road and finally could see the aid station (but not after seeing a cow and her calf on the side of the road. While I was hallucinating and trying to focus I thought it was a big bear and a little bear with a laser pointer. Don't ask).
It did not come as a suprise to me that even with my rationing of water that I was COMPLETELY out of water when I filled my pack. I sat at that aid station for a LONG time. At least 15 minutes. I was starting to feel sick and I was cramping. I drank like 4 cups of coke and ate a handful of grapes before heading out. I knew I had made the cutoff but I just wanted to finish as soon as possible. I took 2 salt tabs and a few licks of Base salt and actually felt pretty good when I got about halfway through the long climb to the Beaver Mesa aid station. Crossed a waterfall and thought I actually SAW a beaver, but turns out it was a marmot. We were finally gaining the elevation and there were actual TREES. And SHADE. 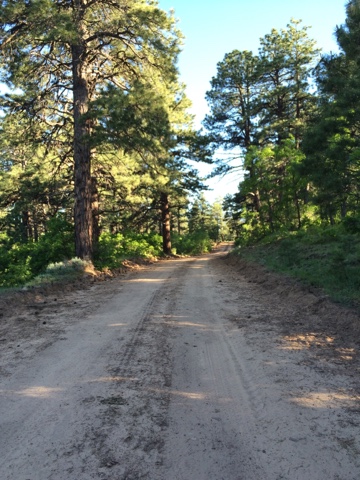 And in the distance, sections of the La Sal mountains - with SNOW on the peaks. 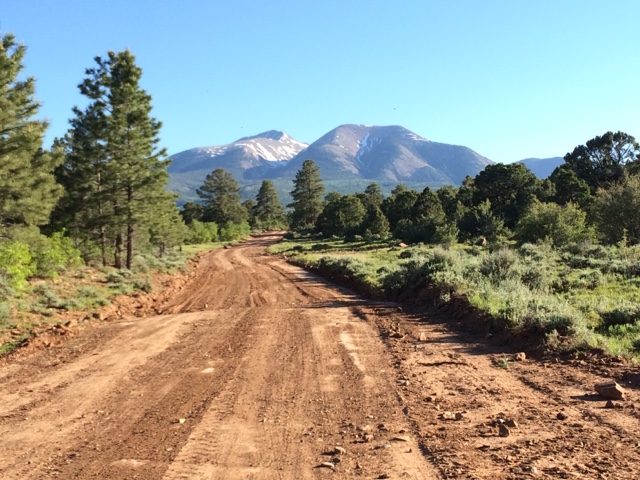 The last aid station was at mile 34. I did not stay long. I was told that there was just the climb up the road and then the road would become paved and there would be about 6 miles of downhill. What I was NOT told was that the hill was about 2 miles long. I was met with some UNBELIEVABLE views when I got to the top of that climb. I had seen a doe run across the road, a gorgeous section of aspen trees and this view of the valley (can you believe I had been way down there at the start?) 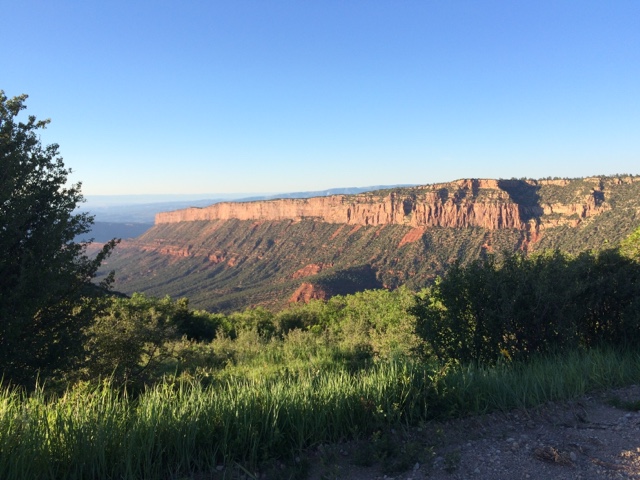 Pretty much as soon as the road turned to pavement and I was able to run the sun began to set. What a lovely sight to see. The temperatures finally cooled down and I was shocked to find that I really COULD run a decent section of this. 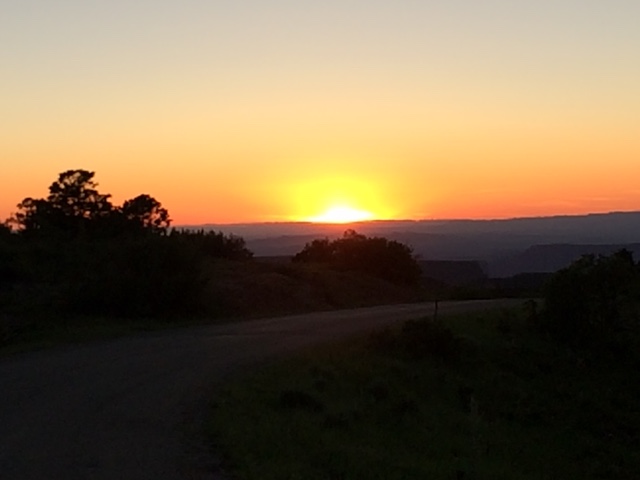 I was required to have my glow sticks out a half mile before sunset and had been holding my flashlight and headlamp since leaving the last aid station although I really didn't have to turn it on until I was maybe a mile from camp. They had put up strings of Christmas lights and I could see it from about a half mile away. I was SO INCREDIBLY HAPPY to have this leg out of the way. I cruised in about 40 minutes sooner than I had hoped and was greated with cowbells and cheering from the whole crew and my running friends. What a cool finish line.

We all stayed up until the last person came through, which was after midnight.
at June 24, 2015