When I was selected as an ERS ambassador, I mentioned to my bestie Heather that she should see if she could come out and run any of the races. She happened to pick the Black Hawk half marathon, described as the most technical and challenging of the whole series. Never mind that it was also starting at about 8,000 feet, which is about 8,000 feet higher than where she lives.

Up early for the drive out. I had mapped it from my phone and estimated that it would take about 45 minutes to get to the start. We stopped at Dunkin for coffee, and were on our way by 5:10. I knew that I would lose cell phone service so I had also printed out directions to the start since I'd never been to Golden Gate park.

TURNS OUT, my directions would NOT have gotten me there. HUGE props to Jeff (race director) for putting out signs MILES out to ensure I was going the right way. I somehow had also lost my parking pass and the directions for the VIP lot were a little confusing. I was able to park right by the "Red Barn" and we picked up our bibs, got everything ready to go. I wanted to know how far apart the aid stations were going to be to decide if I needed to carry  more than my handheld. While we were talking with Jeff he admitted that he had inadvertently marked the course about a mile short, so we would be running 12 miles instead of a half marathon. I was a little bummed because I hate short courses, but Heather seemed relieved.

We had hoped to start at 6 since we knew we were going to be the very last people, but by the time we filled our bottles and spoke with the timing lady it was closer to 6:45. Other than the initial start where there wasn't a clear arrow of where we were to go, I found the course VERY well marked.

Anyway, once we decided to "go straight" and assume we were going the right way, all was well. To be honest, we ran very little. Between my gimpy hip and Heather struggling with altitude, we had both planned for this to be a long day, mostly hiking. We did jog some of the downhills and flats. We also stopped and took a billion pictures. I had never been out to these trails and it was GORGEOUS. 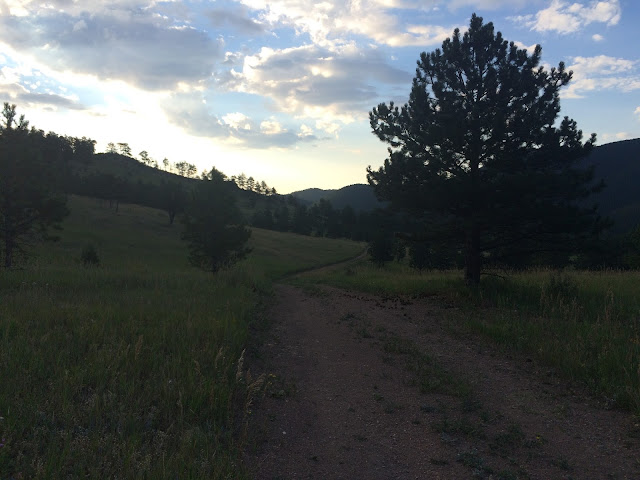 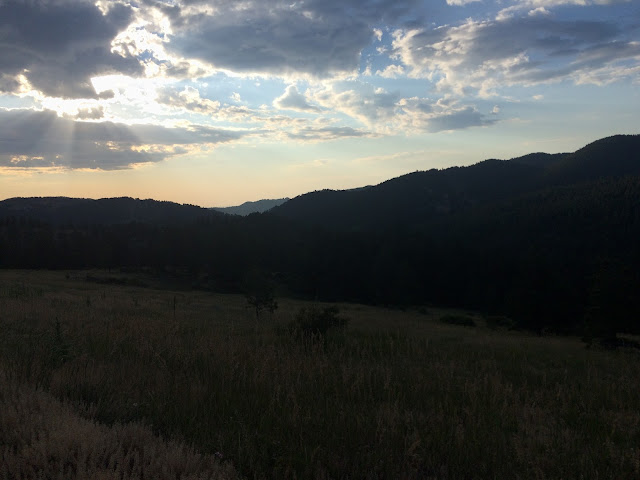 Our fastest mile of the day was mile 2, because it was downhill. It was also getting incredibly warm and I was really glad we had taken the early start. The first part of the course was an out and back(ish) that was about 4 miles. 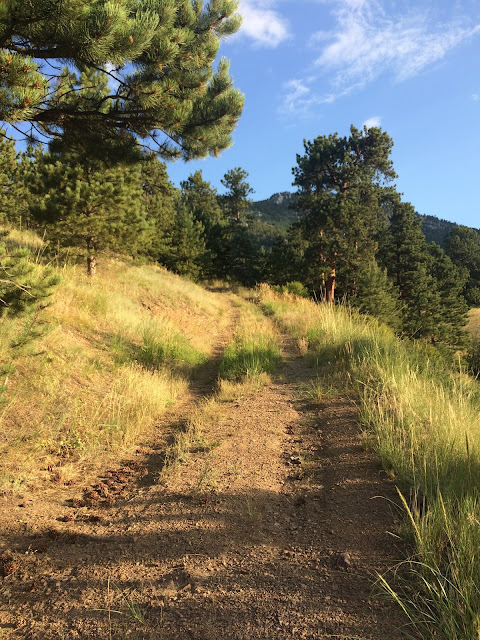 Before we even got to the turnaround the "official" early starters (who started at 7) were already catching up to us. By the time we were hiking up the hill we had run down at mile 2 the faster runners were already headed down (they had started at 7:30). I assumed that the next big section of climbing was going to continue pretty much until we got to about mile 7, when we would finally get some downhills and flats. 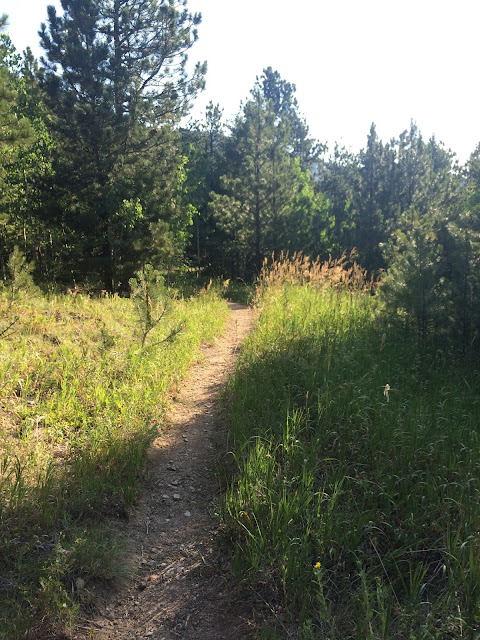 Around mile 4, we entered my favorite part of the course. It reminded me a lot of the Colorado Trail - lots of trees, ferny plants, and we were in the shade "running" along a creek. It was really pretty. This section took forever, between jumping off the trail for all the people behind us, as well as #allthepictures that we were taking. 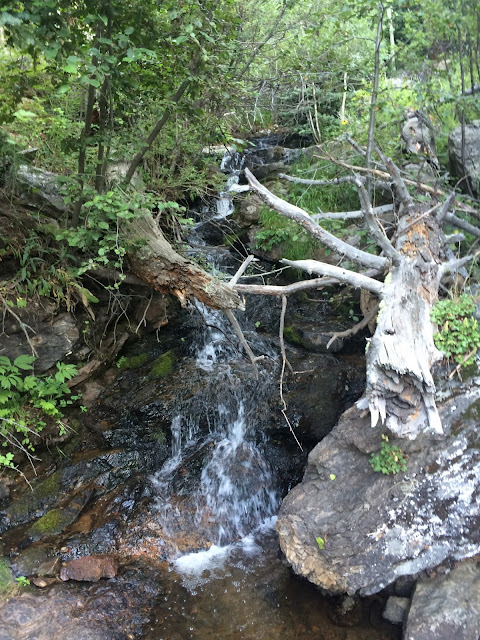 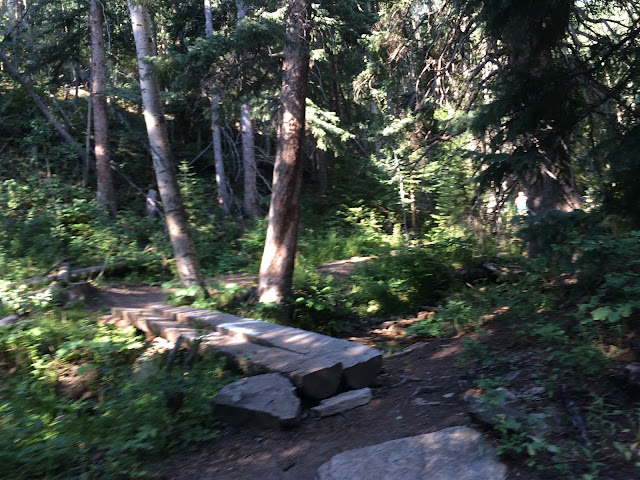 Mile 6 we started what felt like the longest climb of the course. Switchbacks in the trees. Really grateful that it didn't feel that hot. I was hoping it would make Heather feel better that EVERYONE seemed to be struggling on this section, especially since most people live in Colorado. Not sure it helped her that much.
We hit the plateau at mile 7 and were treated with a spectacular view with some truly lovely single track. 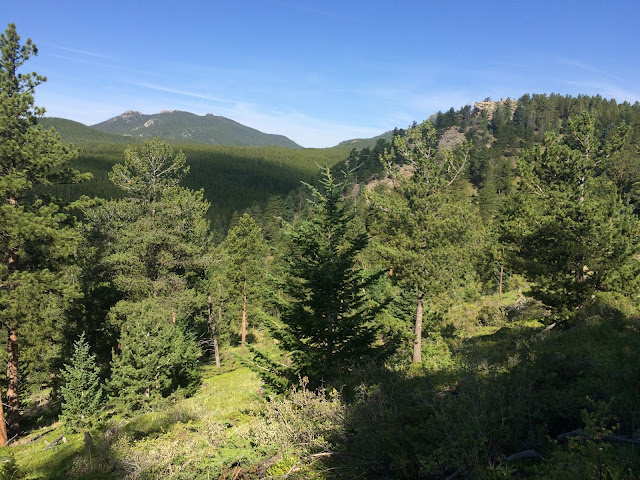 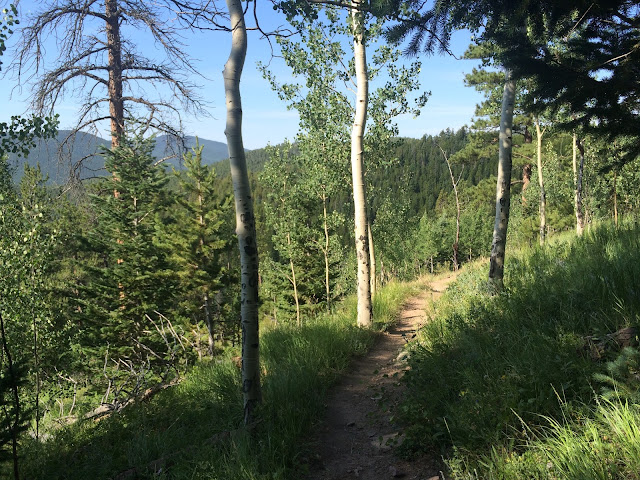 Some downhill, running through a meadow with wildflowers and a nice lake were miles 7-8. 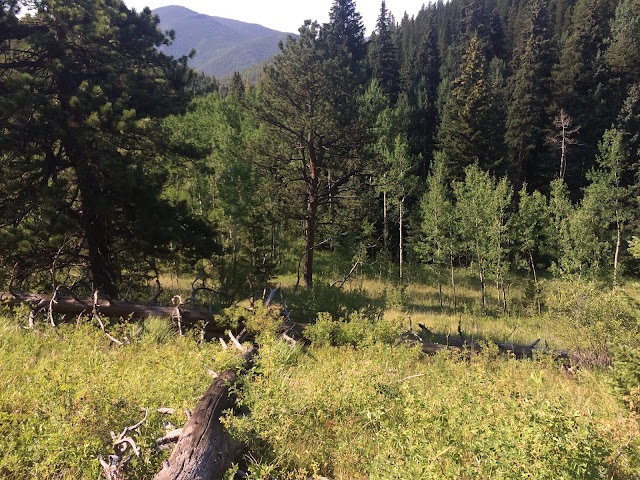 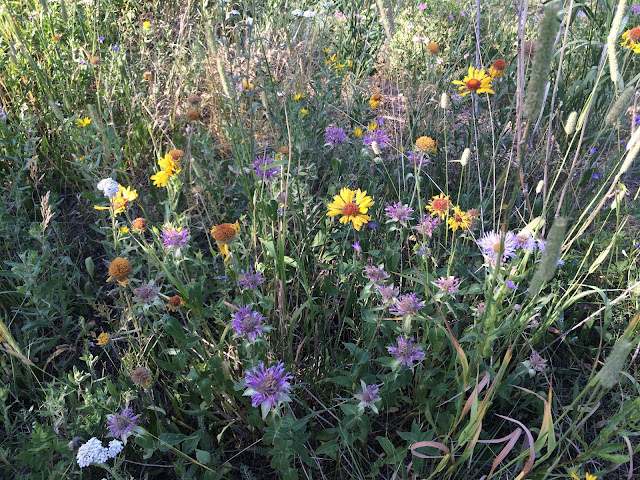 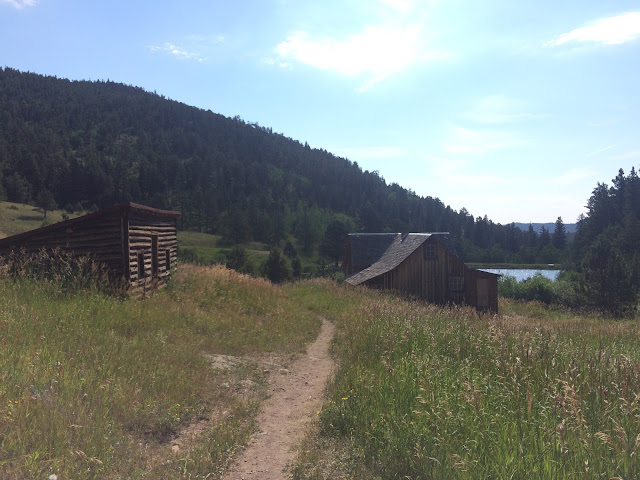 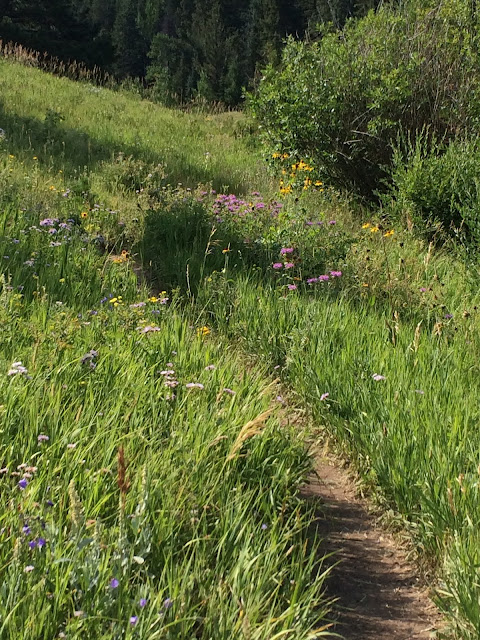 I seem to have blacked out and can not really remember the last few miles of the course. Around mile 9 we were directed down a hill by the on-course medic, where we would get an aid station at the bottom. Which of course meant that we would have to come back up. Lots of resting and break-taking here. At the aid station we were warned that many people found the course markings confusing and numerous people had gotten lost. HOW.

Headed back up and by now - YAY, less than two miles to go. When we got to about mile 11, we were directed down the hill for a short out and back. I thought Heather was going to lose her mind at this point. When we got back up the course marshal told us that we were for REAL almost done now. Sure enough, we could hear the finish line music. When we got down to the dirt road, we ran it in. Confirmed our finish with timing and then headed to the finish line "party."
Pretty much everyone was gone by this time. There was still beer and food left, which is the most important thing. A got a finisher picture of us before Phil tore down the Roost tent. 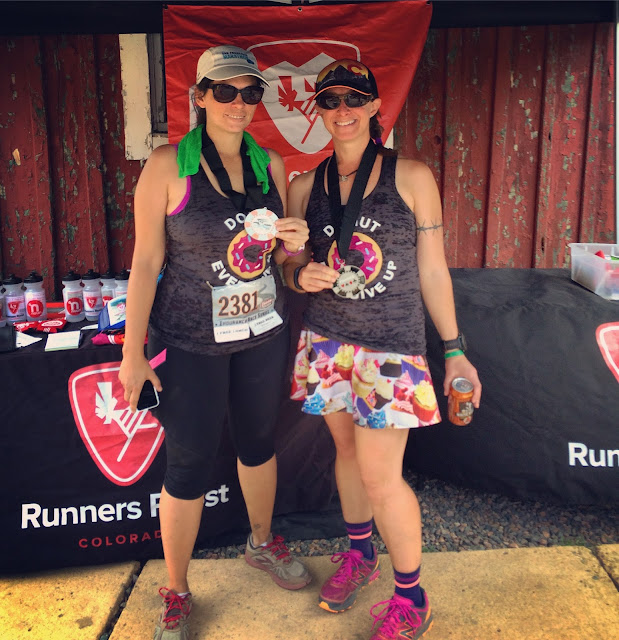