Tuesday (14,458) - A and I had talked about getting up early and trying a run. We scrapped that plan in favor of sleeping in. It's been crazy hot in my room though so I was up well before my alarm. Womp. A made eggs and pancakes for breakfast, tasty! We left the house at 9:30 to go to Water World for a day with the Girl Scouts. The forecast was sunny and hot, perfect for a day at the water park. We had a great time going on rides and the girls really loved playing the wave pool. We headed out around 4:00 as it was looking pretty stormy. We briefly thought about going to the special event down at Runners Roost, but decided to skip because neither Maureen nor Heather were going to be there. Quick run by the house for me to shower and A to get ready for gymnastics. It was a good thing she went to class, they had their testing and she moved up to Advanced! I'm very proud of her, and excited she will no longer have the awful instructor. Tokyo Joe's for dinner, watching the Olympics and in bed early, we were both exhausted.

Wednesday (18,019 steps) - Left work at 2:30 to pick up A so she could join me at my work picnic. It actually turned out to be a lot of fun, we played some corn hole and I played boccie ball for the first time (beating A). We left around 5 to head to run club, hit some rain on the drive, so our timing to leave the picnic was perfect. More walking around the track with Maureen (sigh). 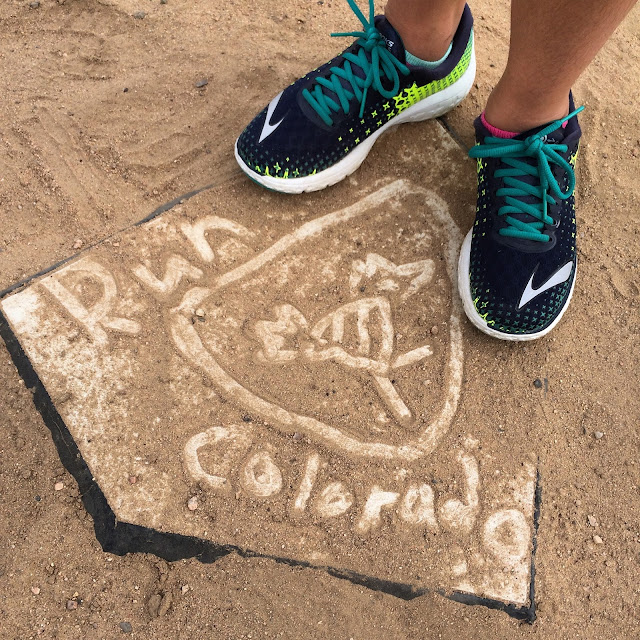 We went to Old Chicago's again after. Instead of pizza, A and I split the Italian mac and cheese (although I ate way more). Home by 9:30 to finish watching the Final Five gymnasts in the team competition. Go USA!
Thursday (15,948 steps) - I dragged myself out of bed, as promised, to run this morning!!! I only did 1.5 miles (which took almost 21 minutes), but at least I got out there. It was incredibly slow and fairly miserable, but hey, I'm practically starting from square one so I shouldn't be surprised. 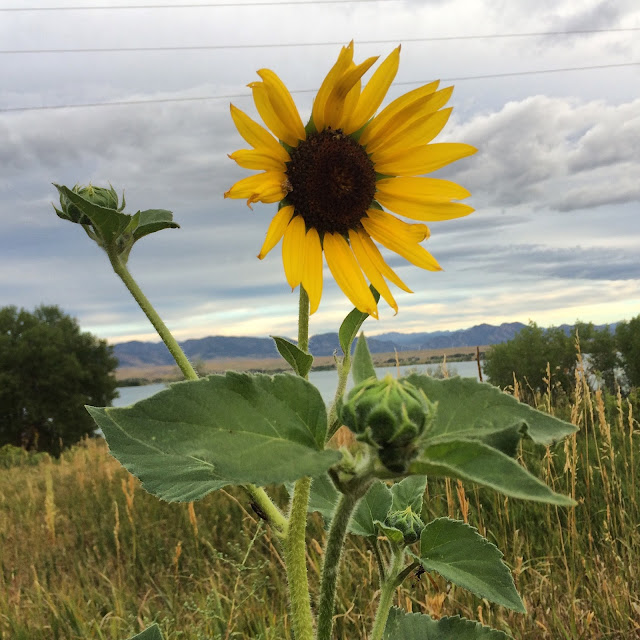 Went to barre during lunch. We had thought about going to Belmar run club with Maureen, but we have both been pretty exhausted so we planned a night at home. Only around 3:00, we got an invite to have birthday dinner with our friend Rose! Whole wheat spaghetti with chicken, garlic bread and chocolate cake. We managed to keep our evening short and headed home around 7. That gave us time to shower, do laundry and watch the first half of the individual all-around women's gymnastics. Also, swimming, but we don't like that as much. In bed at 9:30.
Friday (16,275 steps) - Alarm set a little early so that we could finish watching the gymnastics before work and the inevitable spoilers that would occur when I got there. Hooray to Simone and Ali, they were incredible! No recollection of what happened after work. I assume there was TV watching.
Saturday (37,431 steps) - Run the Rockies trail race. 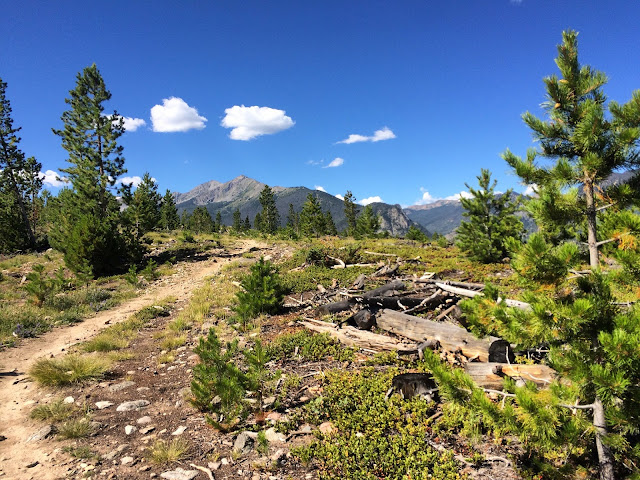 Got home right when I estimated, around 1:00. After taking a quick shower, we went to Chili's for lunch. Apparently our friend Heather's son, Nate, is a host there now! Had a grilled chicken salad, which was delicious. Headed home to watch an episode of Law & Order before going to see "The Secret Life of Pets." The movie was super cute and funny. After the movie we went to Target to pick up only the "urgent" groceries we needed. Then home for the night watching TV. Lazy evening.
Sunday (20,654 steps) - Dragged myself out of bed for an 8:15 barre class. It was pretty full, so I was glad to have gotten there early so I could get my usual spot. A made breakfast - omelette with peppers, cheese and spinach and pancakes. Lisa texted to see what we were doing in the morning because she needed to get out of the house with her puppy, Lucky, while the movers were there. She came over and we took a walk out to Standley Lake. 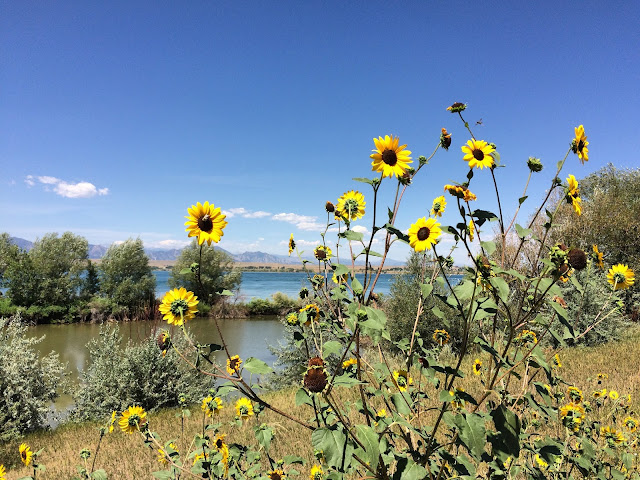 Lucky came in the house to get some water, much to Batman Sour's dismay. 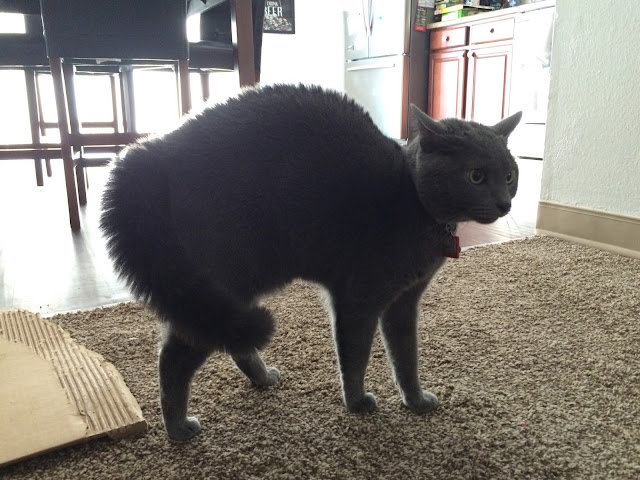 We had to rush to get over to Lake Arbor to meet up with the Girl Scouts for A's canoe lesson. I walked around the lake with Rose while the girls canoed - good to get some exercise. It was SUPER HOT, so we were anxious to get out of there. 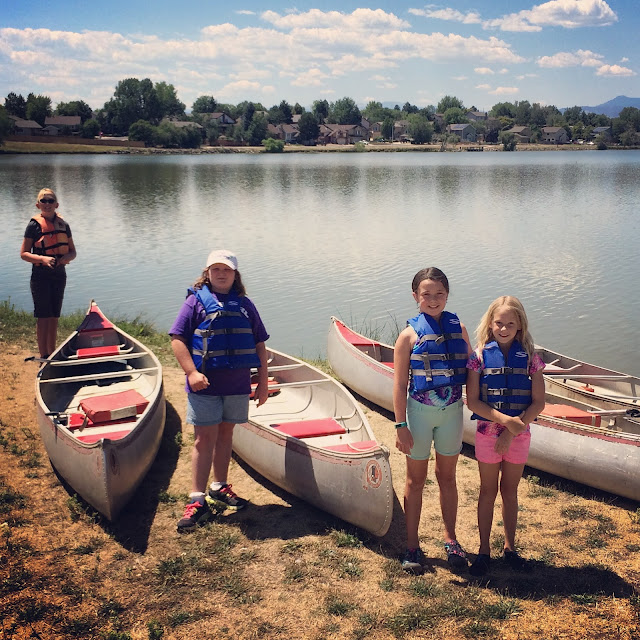 Home to shower and then we went to get lunch at Tokyo Joe's. Not sure if you can call eating at 4:00 lunch, though. Spent the evening FINALLY getting caught up on all the Olympics that we have DVR'd. Especially enjoyed the men's track and gymnastics finals!!! So exciting!
Monday (17,047 steps) - I GOT UP AND WENT "RUNNING" AGAIN!! I had hit the snooze a few times and by the time I got up I didn't have a ton of time. Hip felt a bit tight in the beginning, but I went a tenth further than last time at about the same pace. 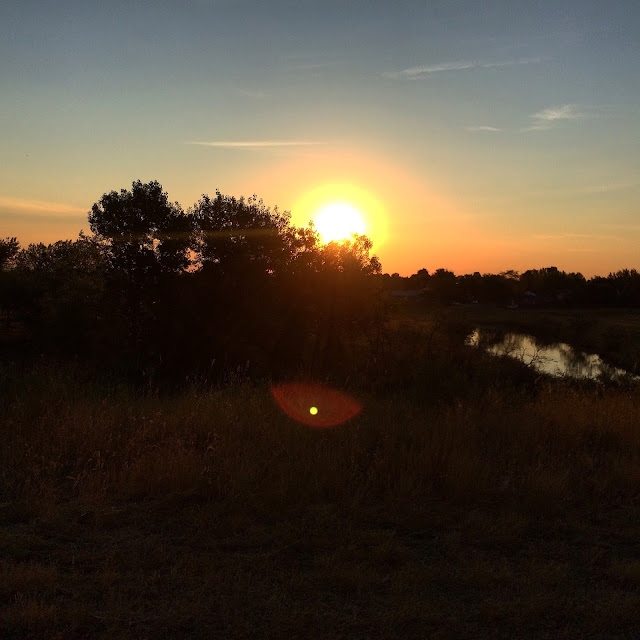 Going to try to run again Wednesday. Hopefully if I ease into running twice during the week I will be able to get back some of my "speed" again. Finally got paid so we were able to do some grocery shopping (I hate hate hate having three weekends between paychecks!) Lazy night in front of the TV binge watching more Olympics. Hurray to Simone and Laurie on the balance beam finals!