The Beaver Creek half marathon is one of the mountain races that I have run before. Two years ago, I ran and finished in 2:54, which at the time was CRAZY slow for me. Spoiler, I did NOT finish that fast this year.

A had gone with her Girl Scout troop camping for the weekend at Colorado National Monument. Then I got a call at 8 pm on Saturday night that they got rained out and were packing up and heading home. Thankfully, my friend Rose was going to let A spend the night, as there was NO WAY I could stay up that late the night before a race.

Sadly, there was no early start option for this event. The race starts at a terrible 9:00 am. (First, because that is late and it gets hot. Second, the race is in the mountains, and having a race start/finish late means getting stuck in mountain "weekend" traffic). I got up at 5:40, and felt hungover (even though I wasn't) and exhausted. Yippee!! The drive was estimated at just under two hours and the goal was to be out at 6. I would have been out on time, except Batman and Robin got into some beef jerky and there was a disaster in my living room.

The drive was uneventful, except for having Ben and his family pass me on the highway. I saw a few deer and a sheep, but that was about it. I was watching the temperature and it looked COLD - 41 degrees when I crossed over Vail Pass!! By the time I arrived at the Beaver Creek resort it was just before 8 and felt warm. Good for standing around, not good for racing. 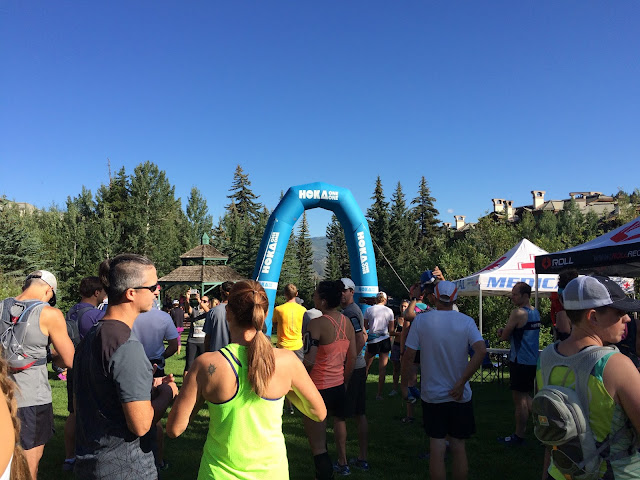 I spent the pre-race lull chatting with Luke and Ben/family. I was actually feeling a bit nervous and apprehensive about this race. The hip has been "better," but I still haven't been running. Outside of a short failed training run last week, I haven't run outside of a race in over a month. With all that in mind, I started at the very back of the pack. Which unfortunately, is where I would remain the ENTIRE RACE.

So the race starts with a short run up the road, up a dirt road, then levels out on the grassy area behind some condos. Even WITH jogging that whole section, I was still in last place. And, I discovered, the course medic was also the bike sweep. I know this because she was just few dozen yards behind me almost the entire race. Urg. 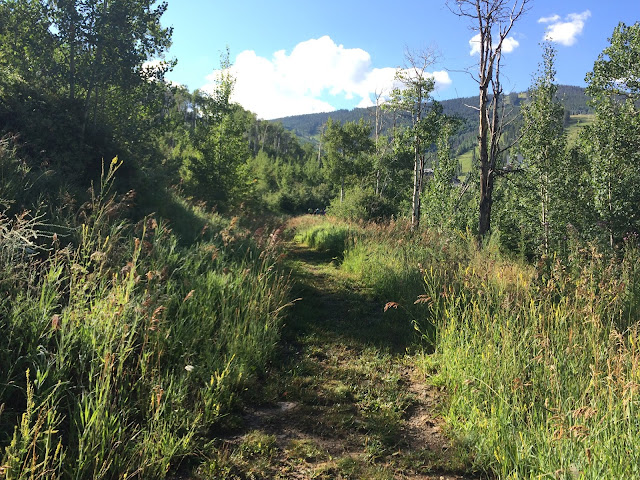 There is a section of switchbacks on single track, then we are on a wider dirt road. I'm able to run a section of this as it feels sort of "flat." Then, we move into the Aspen Glade, which is one of my favorite sections of the course. Since I'm so incredibly slow, I take pictures (the climbing here is pretty steep). At the start of the race we are told "most of the climbing is in the first two miles, sort of lies, there is a decent amount of climbing in the back half. 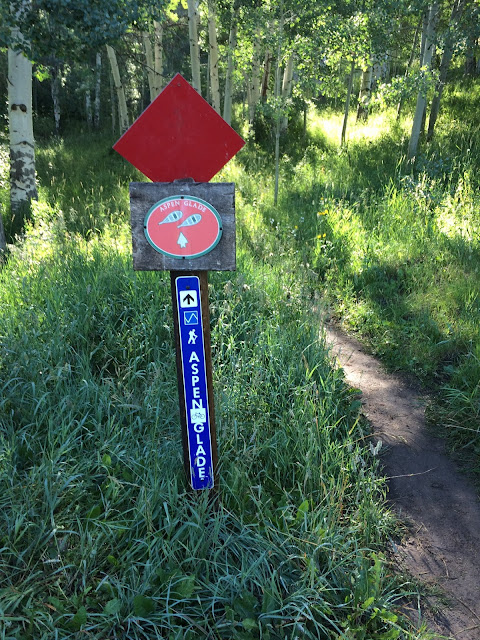 Anyway, by about a mile and a half in, the fast 10k'ers are passing. WHICH IS SO ANNOYING. I probably jump off the single track 800 times during this loop (or however many 10k people ran the race, because I think 90% of them passed me). There is a section of not so steep single track and then arrive at the aid station. HURRAY!! 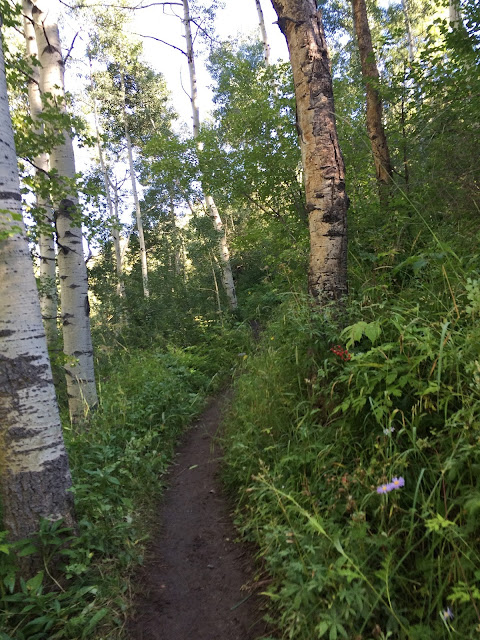 Next part is my favorite, the downhill on Allie's Way. Downhill in trail races always "saves" me because I am a lot better at the downs than the ups. Trail was a tad steeper than I remembered, a bit slick from the rain and #ALLOFTHETREEROOTS - but I still had a good time on it. When we exit the trail we have a more gradual downhill on the ski slope, then a short jaunt up the road, where we enter the 5 Senses trail. 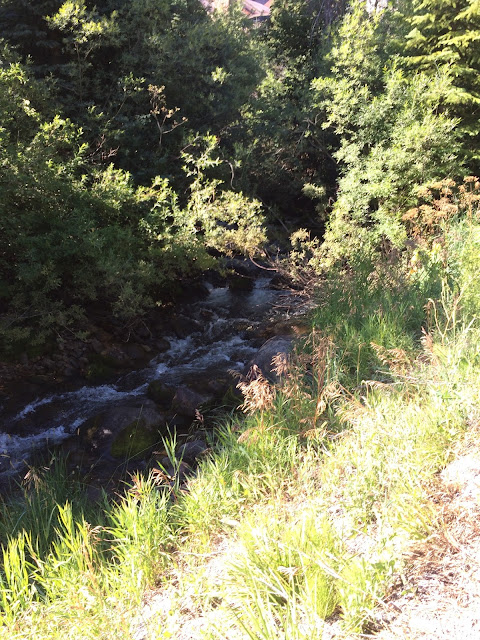 This part isn't super runnable for me, mainly because of all the moving over for faster people and all the families that are taking their families out for a hike. Exit the trail for the next aid station. Fill up with another bottle of nuun. I have not eaten anything at this point. The heat is already getting to me. Jeep road, with a decent amount of climbing, and pretty overgrown wildflowers on the sides. A weird section of gravel, then more single track. 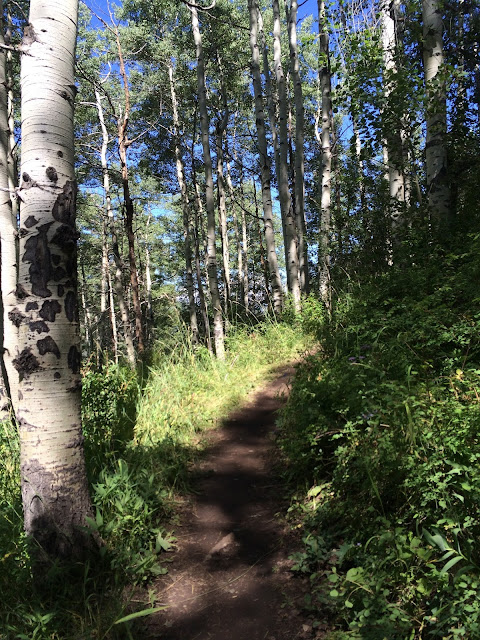 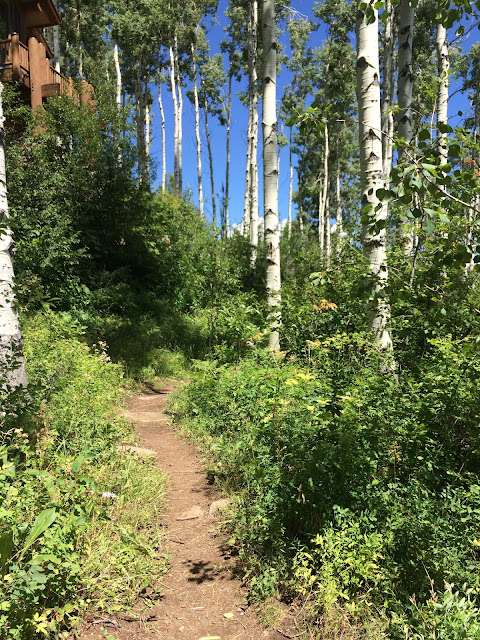 We exit onto the dirt road where the half marathon and 10k split. Half'ers have to run up the hill for the extra mileage (URG!!!), where I actually saw a couple runners, which means I wasn't SUPER far behind the very pack of the pack, and then it's a nice downhill on the dirt until it levels out near town. A short run on the sidewalk to run by the finish area and go out for loop two.

I had NO intentions of just stopping there, but I won't lie that the thought crossed my mind. While I was able to run a decent amount of the course, it felt SO HARD. And I was literally in last place. I could smell the burgers and see people drinking mimosas and beer. I really did not want to go back out. Then I realized that at least I hadn't been lapped by the winners, so I GUESS, I'll go back out.

Runnesia has always prevented me from making super smart decisions when registering for races. As I turned the corner, I saw a gal only about a tenth of a mile ahead of me. I COULD TOTALLY PASS HER!!! By now I'm on FIRE. It is so hot. I am feeling a little iffy and I really have never wanted to be done with a race more than this.

When I get to the base of the Aspen Glade, I pass her! We power hike through the trees and chat a bit. She is having a much worse day than I am and I try to encourage her that she can finish. She mentions that this is her FIRST HALF MARATHON. Oh my god, poor thing! I get to the summit of the trees and I drop both her and the bike sweep. Aid station, and... I see another runner! Maybe I can catch her too!

I eat a handful of peanut butter pretzels before jumping on Allie's Way. The other runner, Sara, let me pass, although by the time we get through this section my legs are TOAST. We actually hiked/jogged with each other for a few miles, before she took off. My legs just didn't have anything left. Thankfully, it seemed to just be because I'm incredibly under-trained for a hilly half marathon at 8000', and NOT my hip.
I caught up to Sara just before the tiny out and back section, and met up with another runner!! I did, however, find out on the way down when I saw the bike sweep, that I was back to being last because the other gal had DNF'd. Dang it!! I couldn't keep up with Sara, but the guy (Gabriel) and I ran together the last mile and a half or so. After chatting with him, he also said this was his first half marathon! I figured we tied for last place when we FINALLY crossed the finish line, but turns out I actually was 10 seconds or so faster thanks to chip timing.

Went to collect my free Darn Tough socks, only to find out they were out (again). Wah!!! They weren't, however, out of beer. I sat and had a beer and hot dog and chatted with the handful of runners that were still at the finish line.

So by my Garmin, the course measured short. I'm sure it was accurate though, the aspen trees is where I stopped matching up with the course markings.

I left the finish area by 1:00, and sure enough, got stuck in horrific traffic on the way down. I actually came to a complete stop on Vail Pass, they were doing "safety metering" at the tunnel (which had traffic backed up all the way to Silverthorne, and then of course, the usual 10 mph from just before Georgetown all the way to Idaho Springs. HATE MOUNTAIN WEEKEND TRAFFIC. This is why I try to never be up there on a Sunday!!