Tuesday (11,494 steps) - Went to barre class during lunch. A moved her gymnastics from Thursday night at 7 pm to Tuesday at 6, so we had to rush a bit to get her there on time. The class was a lot bigger and there were much younger kids with her, we are going to give it another week to see if it is a good fit for her. There was a substitute instructor and I did NOT care for her. Stopped at Target on the way home to get cash and pick up school supplies. RAGE RAGE RAGE. Ugh. I hate buying school supplies so much. It wouldn't bother me so much if she actually got to KEEP what I buy, but our county still does the "communal supply" nonsense. At least she does get to keep her own pencil bag, and she picked out a super cute one with cats.
Wednesday (18,227 steps) - Run club after work! Walked with Maureen again at the track. Jandy had come to see the speaker, Jason Koop, and she walked with A. Maureen and I were determined to get our three miles in. Kinda regretted it when it started pouring on our way back to the store. For the first time, pretty much ever I wasn't into a running presentation. I found Koop to be a little boring, probably because he was talking about training and I'm not running...
We decided to head over to Old Chicago to use one of Maureen's coupons for bogo pizza. My shoe was feeling weird, when I looked at the bottom, my lugs were coming off?? WTH! I have never had that happen to a pair of Newtons, and I've been wearing them since 2010. Especially annoying since they are like a jillion dollars a pair. 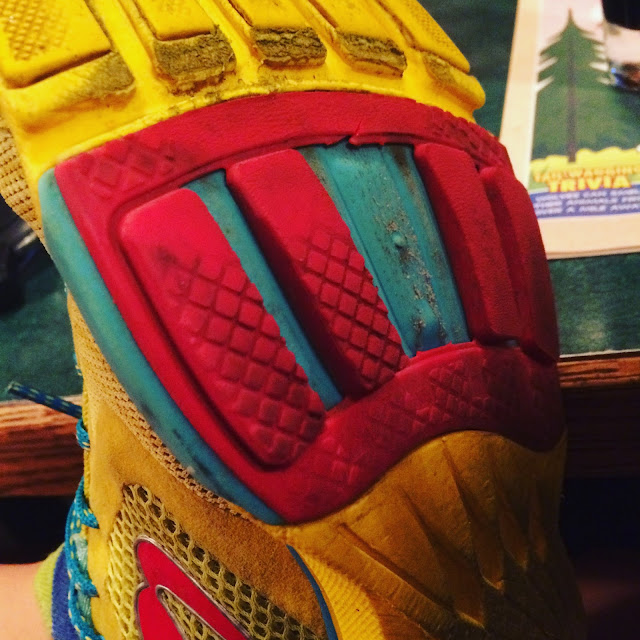 By the time we all got there, ordered, ate and split the bill it was after 10:00 before we got out of there. WAY too late for a week night!
Thursday (13,828 steps) -  So damn tired this morning, could barely drag myself out of bed. Went to barre during lunch. We decided to skip Belmar run club since we were both tired and we have hardly been home. Stopped at the grocery store on the way home, had dinner, packed and went to bed early. Low key, boring day.
Friday (16,461 steps) - Went to barre after work, since A was at camp with her Girl Scout troop. 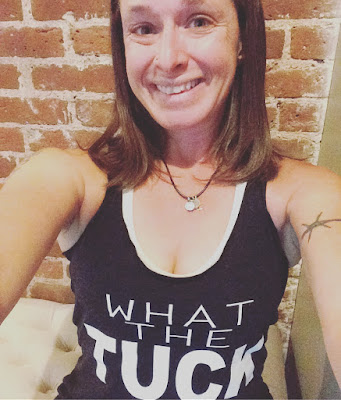 Then, I drove over to Lisa's new place. So happy that she is back in Colorado!! We barely made it to happy hour at the Bout Time Pub & Grub that is under her apartments.
After having a drink we walked a few blocks over to Matador where we had dinner. Great time catching up with her! Both of us thought it was super late, turns out that we were home by 10. Old people.
Saturday (25,111 steps) - Lisa arrived at my house about 5:45 in the morning. We head out on Highway 72 to Nederland, I had suggested we hike at a Arapaho Pass. Lisa was hungry, so we stopped in Eldorado Springs so she could get some food, and then headed out to the Fourth of July trail head. I guess I have amnesia, I did NOT remember the road being so rough to get there! The last 4 miles took probably a half hour. We arrived just before 7:30 am, and I was pleased to see that the lot was not that full. Probably because the sky looked super suspicious. I had only brought a hoodie to wear, and at the last minute, grabbed a beanie and gloves. I wore the beanie the entire day, and gloves most of it. I estimate that it was in the upper 40's most of the hike. We were taking it pretty easy because Lisa is just getting back to Colorado and is not used to the altitude (we were hiking around 11,000 I believe). It started to rain when we were about 3 miles up and we decided to turn around and that it was better to be safe than sorry. It misted most of the way down and it was COLD (but oh so pretty!!). 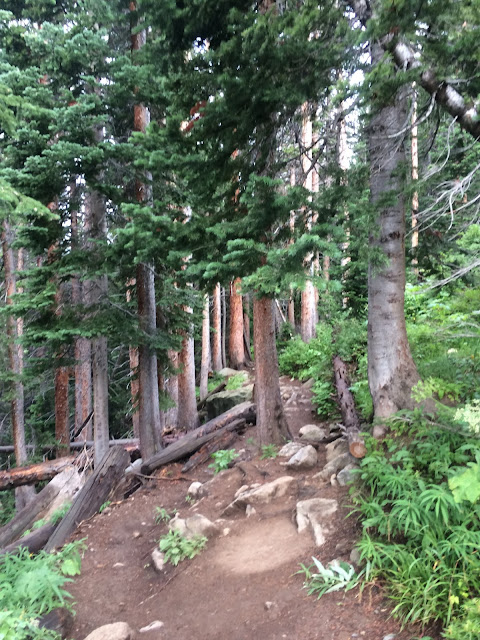 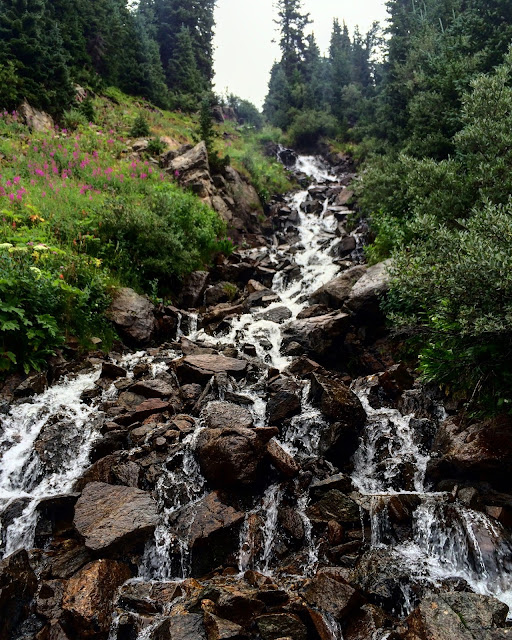 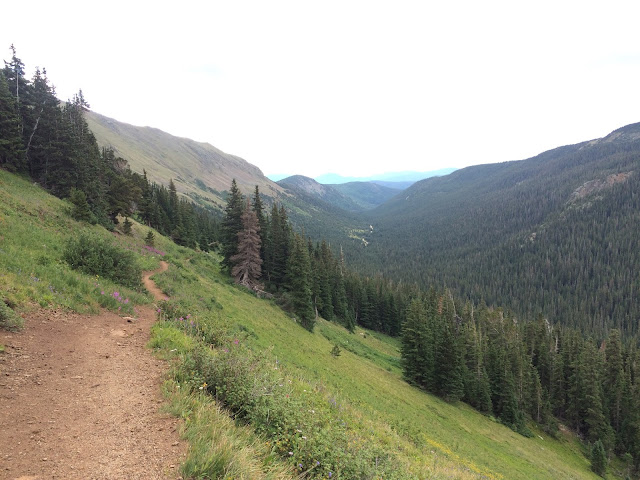 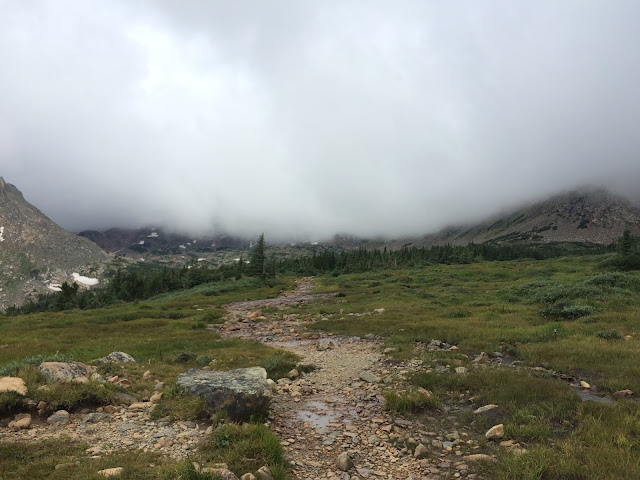 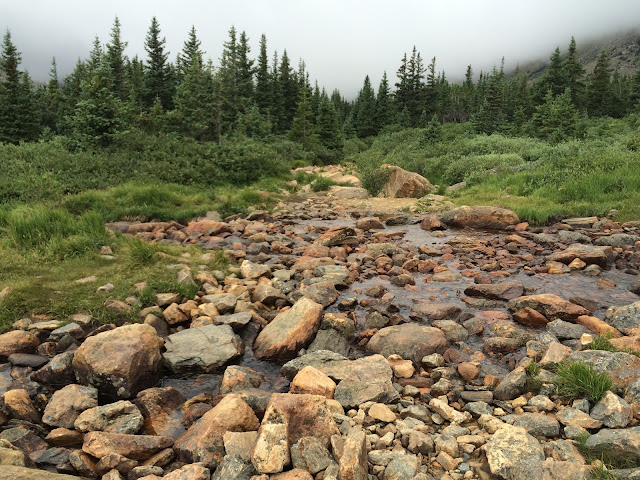 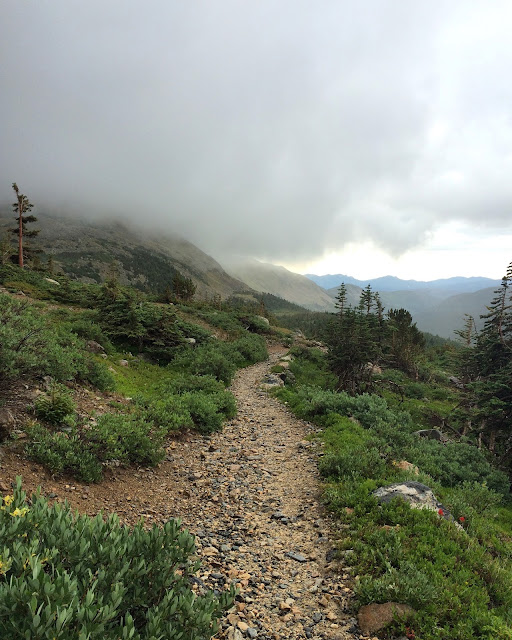 The drive back down was even sketchier than the way up, but Bee Rad did amazing and we survived! By the time we got to Nederland, it was about 11:30 and since the brewery was closed we stopped at Sundance Cafe and had lunch. Grilled cheese and a Twisted Pine stout, it was delicious and inexpensive! Got back to my house around 1:20, which gave me time to shower and take a 20 minute power nap before driving down to Runners Roost for volunteering for the GTIS packet pick-up with Maureen. Other than the first half hour, it was pretty slow. Lisa and I were supposed to go out for a bit, but we both sorta bailed because we are old and tired. Instead, I went with Maureen to Denver Beer Co. for their 5th birthday party! It was pretty crowded, but we got a seat on the patio and it was actually enjoyable. I had every intention of going to bed by 9, but then got a message from Jan that they got rained out at camp, so I had to stay up to message with Rose to make sure everything was cool with A spending the night at her house.
Sunday (36,338 steps) - Beaver Creek half marathon. 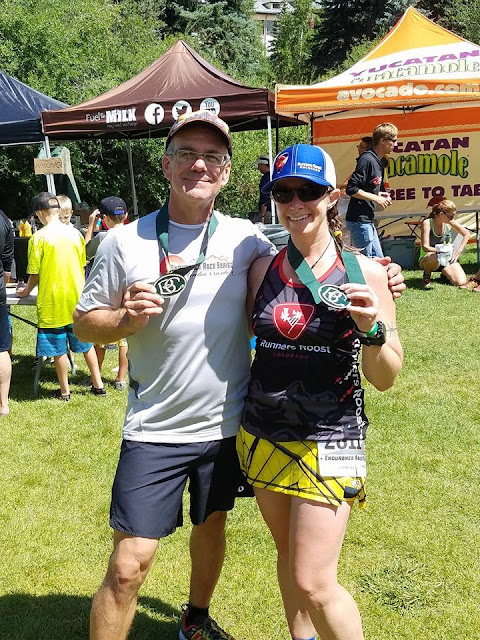 It was almost 3:30 before I picked up A at Rose's house. I was so annoyed with being in the car for so long and I was parched from forgetting to grab water for the drive. We immediately headed up to Boulder for volunteering at Ironman. I have volunteered at almost every 70.3 and full Ironman for the lat 5 years and I'm glad I was able to get out there again. This was the first time we were not on the course volunteering. We met up with our teammate Jeannene at the Info Tent where we volunteered for a few hours. 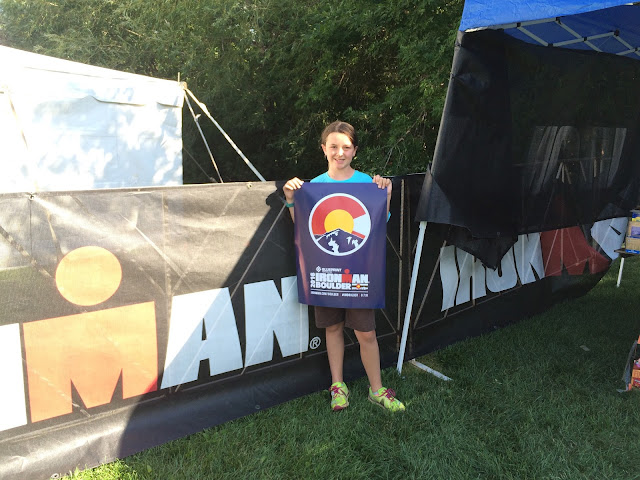 We went over to the finish line to spectate for about 45 minutes, but we were both pretty tired so we were headed home before 7:00. The evening was spent watching the Olympics (gymnastics) and going to bed early.
Monday (13,572 steps) - Even though I had gone to bed by 9:30, getting up at 7 was rough. Ugh. So tired ALL THE TIME! Traffic on the way in to work was horrendous, an accident on the flyover caused me to get rerouted on WEST I-70, adding about 30 minutes of bumper to bumper traffic to my commute. Went to a barre class at lunch. Stopped at Sprouts on the way home to get some groceries, low key night.