I really don't know what to do with myself when I'm at home. Not just with the time, but with my running. When I race? It's easy. No long run to plan. No worries about hydration or course or time. It's all done for me. I know I'm going to get 13.1 in whether I like it or not, and I know I'm not going to be a sissy. It's gonna get done, and it's gonna get done with maximum effort.

I'm off this weekend. Initially I planned on doing a "longish" run of about 10 miles on Friday morning running the Lake Arbor Loop after I took A to school. However? Epic.Fail. I thought I was dressed accordingly. Later, I'd discover that I was looking at AUSTIN's forecast, not ARVADA's forecast. Stupid weather app...

I did NOT take into account the damn wind. Every time I ran west or north, I was running against the wind. I was freezing. And then when I was running east or south, I was running with the wind and facing the sun and it was HOT. I honestly thought about quitting after only a lap or two, but then I figured I made ALL that effort to get out there and run. Pretty shocked I actually got five miles in. After leaving, I immediately was pissed at myself for not sucking it up and running another five. Blah.
How to spend the rest of the day? Making a healthy lunch for A: 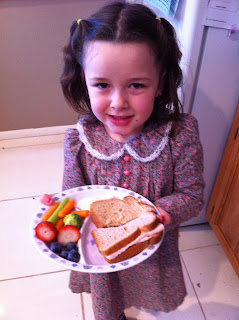 A wanted more time on the treadmill. She is up to 17 minutes on the big one now! And like me, she can't pace nearly as well on the treadmill as she can outside. She runs like a drunken frat boy and I have to stand behind her to make sure she doesn't face plant or fly off the back of the treadmill. 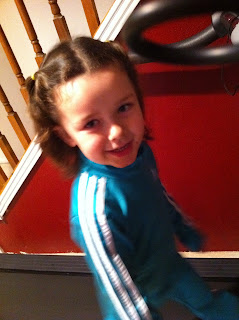 What happens on a race-free weekend? Silliness.

A also has a gymnastics class on Saturday afternoons. She was pretty tired by the time she was done and actually took a two hour nap. I spend some time on the treadmill in the basement running (still nowhere near my ten mile plan) while watching "Hoarders." Anyone else watch that show? I find it FASCINATING. 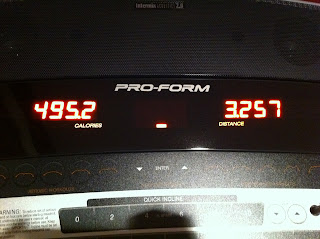 After dinner (pizza buffet of course) we had some good ol' fashioned Mario Kart time on the Wii. I'll be honest. I was AWESOME at Mario Kart back in the day. You know, when the 64 was the coolest system out. I was impossible to beat. Then out comes this new fangled Wii with the steering wheel controller, and all of a sudden I not only suck, but I lose to A. Yep. A five year old can beat me. And do it easily and while talking quite a bit of smack.

Nothing planned for Sunday. However... there is a 5K race in Washington Park, which is only about 15 minutes away. It doesn't start until 10 am, so if A wakes up early, we might head over there. I'm already feeling race withdrawals.
at January 22, 2011