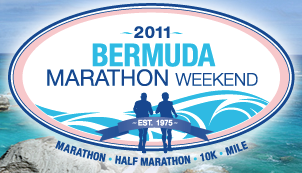 The last race of the Bermuda Triangle challenge was either the marathon or half marathon. I never had any intention of running the full, and since we are half fanatics, we of course were signed up to do the half, this being our 21st! After having slept so well the night before and my long nap, I did not get ANY real sleep. We had gone to bed at 10:00, and I tossed and turned most of the night and woke up pretty exhausted.

The race was to start at the same location as the invitational mile, which was only about a ten minute walk away. We decided to head over to the start line with about 40 minutes to go.

There were no port-o-potties at the start line, and we had been in line at one of the dock bathrooms for almost ten minutes before we realized that they were locked and we were optimistically waiting for someone to come open the doors. We headed over to the start line and were told that there were some bathrooms in one of the pier terminals. There were... two stalls. Are you kidding me??? So we wait. And wait. And wait. And then the race officials start coming in. Announcing that the race starts in ten minutes, eight, five, etc. Finally, with less than 5 minutes to go, I jump in line for the men's room. I'm happy to report that this was the cleanest men's room I've ever had to use. No poop anywhere on the toilet or floor! Hurrah! We are jogging to the start, and the gun goes off before we get there. L and I are literally the last two people across the line, and that's why there is no pre-race pictures. Suck less with the organization and bathrooms, Bermuda...

I honestly don't get nervous for half marathons anymore. I know what to expect, I know how to pace. But... I felt a bit different for this race. I knew this course was hilly, but if I was actually reading the elevation profile correctly, it wouldn't be as bad as the 10K. Good thing... my legs were still pissed at me. I was tired, and I was NOT looking forward to the warm temperatures and only FIVE aid stations along the course. I'm used to a lot more than that! However, Bermuda is a BEAUTIFUL country, so that pretty much canceled out all the crap that I wasn't looking forward to.

The main objective was to start out slow, and hope that I could get through it without it being as terrible as the day before. The first mile or so was a struggle. Mainly because we started in the very back of the pack, so I was dodging around people and trying to find a good pace. Did I mention it was hot? By about mile 2, I was already sweating quite a bit and feeling tired. The first aid station wasn't until just before mile 3, and it seemed like it took FOREVER to get there. I probably thought at least a dozen times during the first half of the course that I felt really terrible for the insane people that were going to run the full (half marathon course twice). There were some hills in the 3-4 mile range, and I was TIRED. My legs were tired, my body was tired. I was tired of running. The scenery was beautiful, it reminded me a lot of Hawaii, and I tried to be better about getting some pictures. If I'm not really enjoying the run, might as well enjoy the view?


One of the most frustrating aspects of this race is that the roads are NOT closed to traffic. There was about a half mile section where I was being "tailgated" by a trash truck. Where do you want me to go buddy? There is no shoulder. So I didn't really enjoy the miles where I was breathing in exhaust. Again, just had to remind myself that I was in BERMUDA.

Luckily for me,  the course seemed to get "easier" after I got past miles 4 and 5. What a relief! I was hot, and I was tired, but with the hills not being as bad, it wasn't AS bad. I found a few people to pace with, and my speed increased a bit.

A mile or two of the course overlapped the mid section of the 10K course (luckily not the insane hilly part) on the back side of town. There was a surprisingly large number of folks that were out watching the race. That was really nice! And most of them took the time to read our names on our bibs. Also nice!

Miles 7-12? I really don't remember that much of them. The ocean was in my sights for most of the race, and I think I just zoned out a lot. Came around the bend around mile 12 and could see the hotel we were staying at. I honestly can't remember the last time I was so happy to see the end of a course! There was a weird out and back that was obviously added for distance, and I tried to sprint with my pacing buddy (his name was Barry), but he beat me to the line. I was actually pretty surprised that I finished as well as I did.

And as for the overall challenge? Out of all the half challengers I finished 58th with a time of 3:10:16 :D

I was a bit worried about L. She said her leg was getting much worse, and was aiming to finish in 2:30. I grabbed a diet Pepsi and bottle of water at the finish line and then headed down Front Street to watch for her. I was shocked when she came around the bend just a few minutes later. I didn't really have my camera ready, but I actually got this shot of her heading to the finish line. 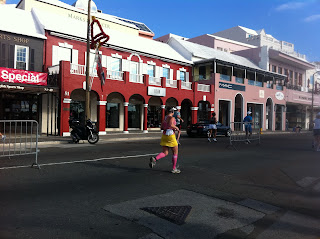 So you see this guy in the yellow top and black shorts? That is the marathon winner. He finished in just under 2:25... so only about 20 minutes after I finished. And he didn't even look sweaty. Madness. 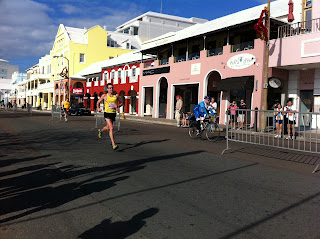 We headed back to the hotel, and took quick showers and packed. Then we walked over to Buzz to pick up lunch. I got an awesome panini: 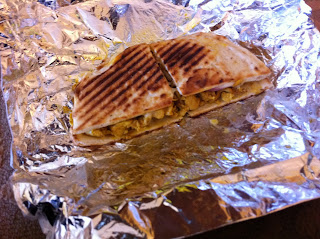 We checked out at noon, and had a shuttle scheduled to pick us up at 12:15 to take us to the airport for our 3:00 flight. The shuttle was a few minutes late. The race was of course on the main road and there were some delays. The airport in Bermuda is teeny tiny and we got there in plenty of time.

Flight to Philadelphia was uneventful. Our layover in Philly was just under two hours long, so we had dinner there. I got a pepperoni Stromboli and Greek salad. Yum. 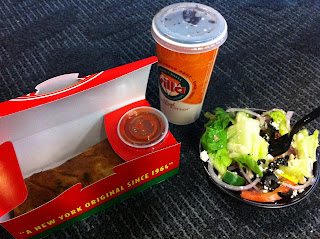 The flight from Philly to Denver? Longest. Ever. Seriously. I don't know HOW we managed to land 20 minutes early and it still felt like we were on the plane forever.

Email ThisBlogThis!Share to TwitterShare to FacebookShare to Pinterest
Labels: Bermuda