As usual, I had planned this trip to Bermuda for the International Race Weekend an eternity ago. Back in July. So imagine my annoyance when mid-October came around and Delta had cancelled a flight segment that would cause me to miss the connection in Atlanta (of course Atlanta) to get to Bermuda in time. Their only solution was for me to fly out an entire day earlier and have a 20 hour layover in Atlanta. I of course freaked out. It didn't matter to them that I'd now have to pay for a hotel in Atlanta and miss a whole day of work at my expense because THEY cancelled a flight. Luckily I was able to just get a complete refund and start over. Still annoying.

With that said... I've only taken one red eye flight in my life, and that was when I left Alaska. I do not like red eye flights. I cannot sleep on planes. So I was totally unimpressed with our flight time of 12:55 am. L's boyfriend, R, was nice enough to take us to the airport. We had actually been able to check in online and print our boarding passes, which surprised me since it was an international flight. We get to the airport and check the departures on the screen. There is absolutely NOT a single flight listed for Charlotte. Hmm. That's a bit disconcerting. There was a gate listed on our boarding pass so we just headed that way and hoped for the best. It wasn't until about an hour before departure that we found out we were in fact at the right gate. Way to go DIA... as if travelling isn't stressful enough.

Surprisingly, the flight to Charlotte was uneventful. We had a short layover there before getting on another plane to Philadelphia. Just before boarding, 12 of the rows were re-seated for "weight" issues. L was in her own row, and I got stuck in the middle of two overweight men. I understand needing to make sure the weight is distributed evenly, but did they really need to seat me THERE?? Ugh. Then there was the flight to Bermuda... there was a whole group of women on the plane that were running in Bermuda. They had matching jackets and had the pilot announce that they were on board. Oy.

The flight in itself was ok. We landed and then as we were standing in line to get off the plane, the flight attendant announced that we had to fill out customs forms before getting off the plane. Every other international flight I've been on they give it to you an hour before you land. Let me tell you, it was pure chaos. People left their luggage in the middle of the aisle ways, so once you had your paperwork filled out, you got to climb over people's crap (while lugging yours) and try not to hurt yourself. Man. I have a short fuse dealing with people.

We get in the airport only to discover that they had only given us ONE of the TWO forms we needed to fill out. So. Yeah. Had to still do another one. Getting through the airport was simple enough, and we got a taxi to take us to the hotel. I had not done my research and didn't know that Bermuda was owned by the U.K. - hence driving on the "wrong" side of the vehicle. 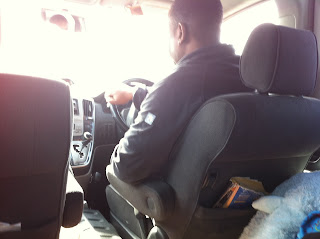 Of course it wouldn't be the same if something DIDN'T go mildly wrong. Somehow they gave away all the doubles and L and I ended up with a King single. At least there was a pull out couch. But still? Annoying. Especially at the ridiculously rate that we were paying to stay at the host hotel. Our room was nice though. 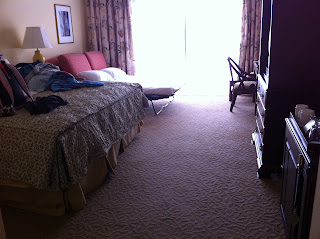 We had about an hour to kill since packet pick up didn't start until 3:30, so we decided to walk around for a bit.


We only had to walk a few blocks before we found a little cafe that was open. Of course we were ravenous. They had a little food bar and could order anything from sushi to burgers to smoothies. An all in one! So I got a bit of mac and cheese, a small Greek salad, and a smoked turkey sandwich. 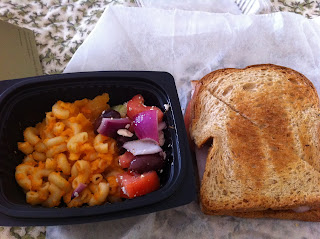 We ate lunch in our hotel room because the cafe had no seating area. Then at 3:30 we headed to pick up our packets. What lunacy. There were two different rooms on two different floors handling packet pick up. On the ground floor we were able to get our bibs and timing chips. Then we had to go upstairs to get our shirts/goodie bags. It was chaotic and disorganized. We took everything back to our rooms and discovered that we were also getting FOUR race shirts in addition to our FOUR medals. Wow. So much stuff. I was reading though the official program, and I wasn't too impressed with the maps that they provided. Hardly any streets were listed, and there were no landmarks, so I wasn't entirely sure I knew where we were going to get to the race starts. We went back to the information booth and verified where the start lines were. The race didn't start until 6:30, and we were exhausted from not sleeping on the plane, so we decided to take a short nap.

Woke up and still felt REALLY tired, but got dressed and ready to go. After standing on the balcony for a minute, it seemed cold. There was of course no bag drop for a race this short/small, so I opted to put my long sleeve shirt on UNDER my awesome tropical top.


We were told it was about a 10-15 minute walk from the hotel to the start, and we were supposed to be there at least 20 minutes before gun time. By the time we got over there, it was already dark. They still had all their holiday lights out!

L and I were not in the same waves, it was alphabetical, and she was two waves ahead of me. I was in the last corral and spent the 30 minutes or so talking with some ladies from Canada. One of them had run the races before, so I was able to get some insight into just how hilly the courses were and what to look out for.


I have never in my life run a timed mile. I had no idea how to even do it. As dumb as that sounds, for essentially the last year, all I've really run are half marathons. I know HOW to run a half marathon. So for all the races I was running this weekend, the mile was actually the only one I was apprehensive about. I headed out at a bit faster than race pace and hoped I could keep it up. I ran probably not as fast as I could, but I've also never run in the dark, and I didn't want to trip and fall. My goal time was sub 8:30, and the official time I got was 7:46!

The course was a strange, almost figure 8 type course. We started one way down front street, did a turn around at the bird cage, ran about a half mile in the opposite direction back past where we had just started, did another turn around at a fountain, and then essentially finished at the same place on Front Street, only on the other side of the street. I'm glad I'm not one of the fastest people, I would never have figured out which way to go. Sometimes being in the back of the pack is better :D

After the race, we wanted to get a pasta dinner. Bermuda is apparently another place where everything is SUPER expensive. And everything closes early. Finally we decided to just eat at the restaurant in the hotel lobby. I had an interesting linguine with some sort of cheesy tomato sauce, asparagus, chicken, and apparently shrimp. 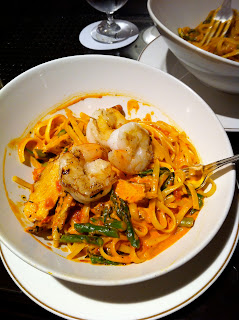 After dinner we of course were thirsty, and as I said, everything was closed. The guy at reception was able to head us in the direction of a 24 hour gas station that might have a diet coke for sale. Hurrah! We had to walk about another half mile, and along the way, we found a small cafe that was still open. We were able to get our bottled water, soda, and vitamin water, and also, a slice of cheesecake!! And it was DELICIOUS. 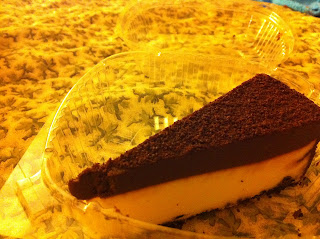 Email ThisBlogThis!Share to TwitterShare to FacebookShare to Pinterest
Labels: Bermuda