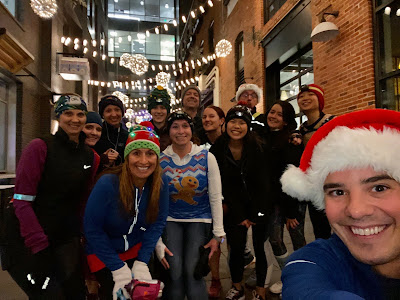 Another run where I really felt like crap. I miss the days where I didn't have to take a walk break during an "easy" three miler. Blah. 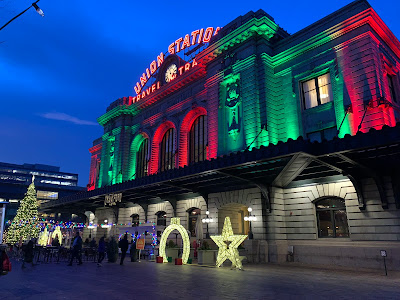 Dinner was sandwiches and potato salad, and those of us that wore "festive" attire got a free boozy hot chocolate! Yum! 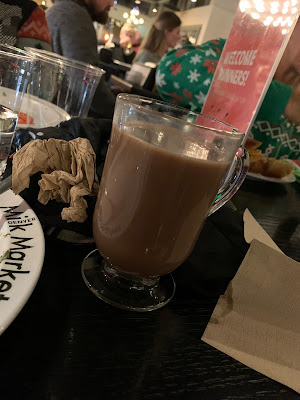 And of course the day's beer advent. 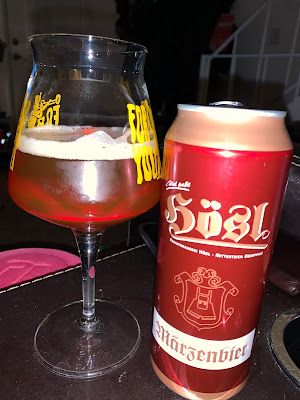 Wednesday (20,115 steps) - I was supposed to have core class during lunch, but my morning appointment was late (and eventually a no-show), so I had to skip because I wasn't sure if he was going to show up or not. Grrr.
Took Pika for a walk before heading back into Denver for the annual holiday lights run with Runners Edge! There was a lot more traffic than I planned for, and we rolled up only a minute before the start. Grrr, stress! Mo still isn't really running, so I told her I would run Colfax. For the first time ever, Colfax got out of his collar! Not once, but twice! He was pulling more than usual and lagging behind, so eventually I had to pass him back to Mo because I was afraid he would escape! 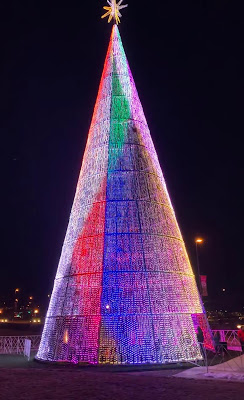 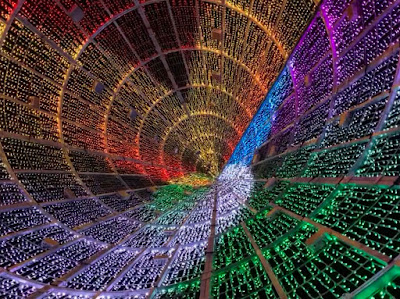 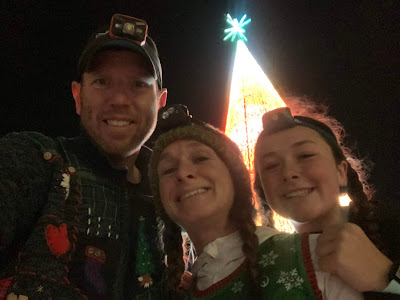 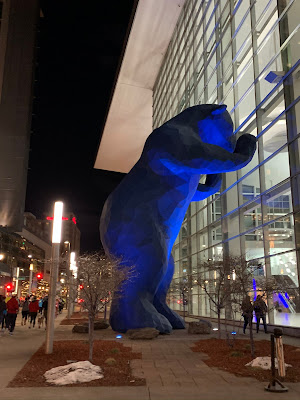 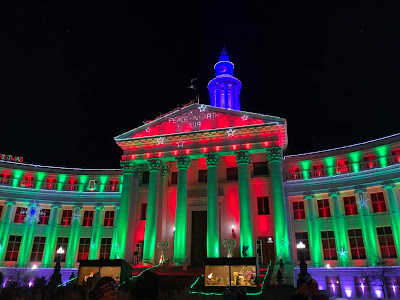 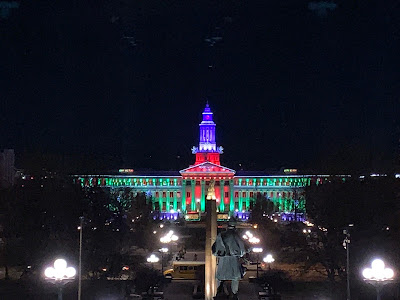 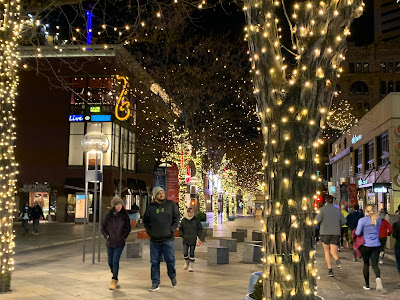 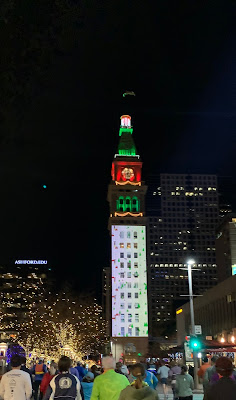 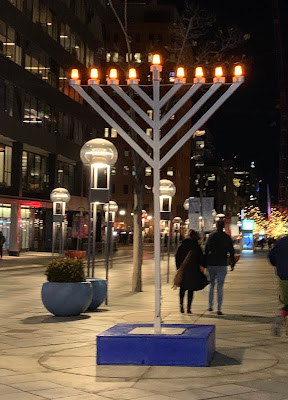 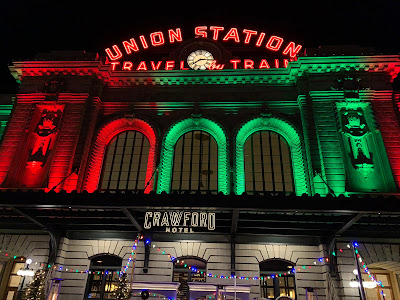 After, we had appetizers and a few beers at Ale House. Thanks to the run starting at 7 we were out much later than I had hoped, it was 10 before we got home! On a school night!
Thursday (13,377 steps) - Got basically NO sleep. Ugh. I've really got to figure out my insomnia issues, it's soooo frustrating. I figured there was absolutely no way I would be able to get through run club AND trivia, and since I wasn't able to go to the gym yesterday, I decided to stick around downtown after work and take two classes. My first was "chest and biceps" and holy cow was it hard. Followed it up with a strength class. Pizza for dinner, attempted going to bed early.
Friday (7,692 steps) - Core class during lunch, and it was tough! Right after work I drove up to Periodic Brewing to meet Ben at Meghan's graduation party. 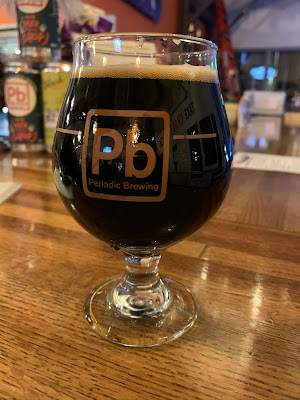 We were only able to stick around about an hour since we still had to head up to the mountains for Heather & Jake's going away party. Late night. 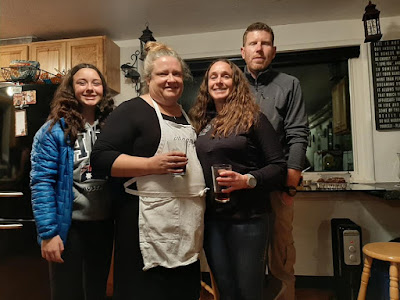 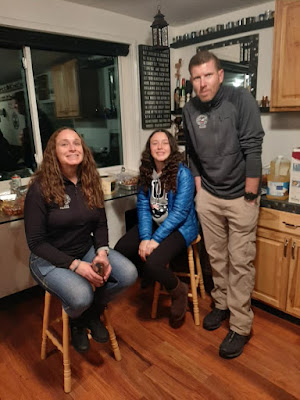 Saturday (30,303 steps) - Runners Edge! I was initially optimistically thinking of running 10-12 miles. Turns out, my body felt like crap (thanks to the eating/drinking the night before). Plus it was icy, plus, my gut was NOT happy. I feel very accomplished that I actually got through 8+ miles. Ugh. 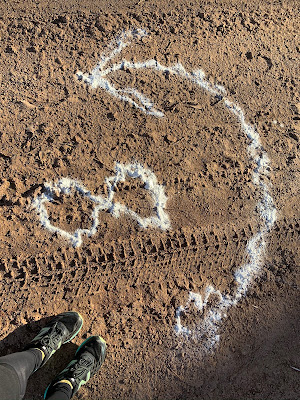 Took Pika for a walk and then started our excursion of finishing Ben's costume for my work holiday party. In between shops we dropped A off for a sleepover. Got all his stuff done and then stopped for a beer at Denver Beer Company. 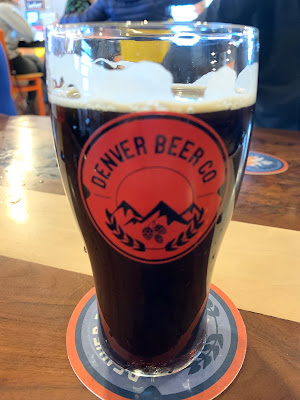 My work party was at Studio Loft again, and it was a lot of fun! I wish I'd gotten a picture of the two of us without my jacket on, but meh. Ben did get a lot of compliments on his fun twist of our "pirate" theme! Late night, it was probably close to 11 before we got home. 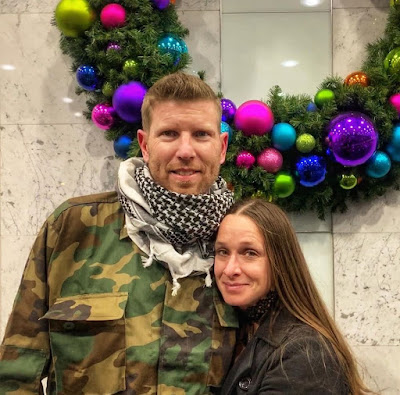 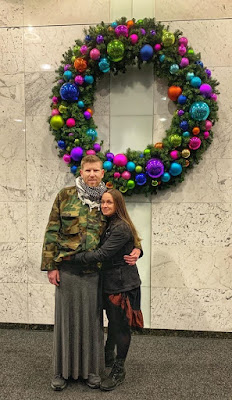 Sunday (20,720 steps) - "Slept in" but still didn't sleep well. UGH!!! Relaxing morning before going out with Ben for a freezing 6 miles by the lake. Pretty much the only good part about it was finding another egg! 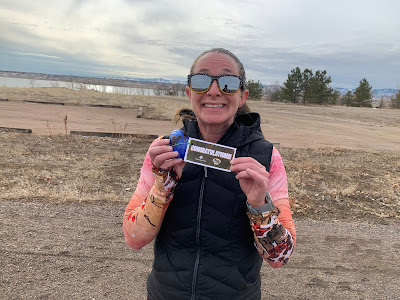 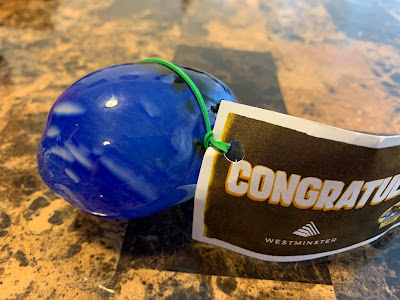 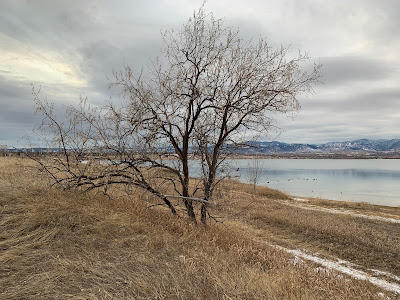 Pika walk before going to Berkeley Park race team party. Like last year, the food and company was amazing. Ben had the most luck of all of us, and won one of the grand prizes, an R8! 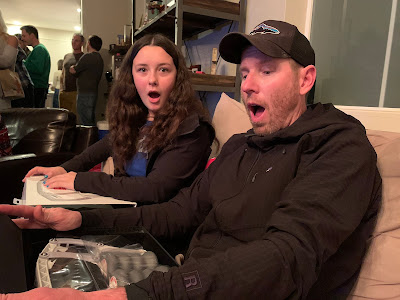 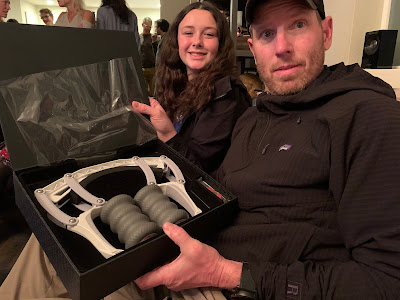 Monday (9,221 steps) - Finally had a relatively decent night of sleep, although I was not happy getting up.
It was really cold on my Pika walk! How am I going to survive another few months of freezing cold temperatures??
Core class during lunch (I don't normally go to the gym on a Monday, but trainer will be out Friday, so I swapped). Picked up A at Scouts, grabbed my online order from Target & then we met Ben at Buffalo Wild Wings for dinner. Amazing special right now, buy one get one free boneless wings! By the time I got home, I was pretty exhausted (from... sitting all day?) - and we watched two episodes of Ozark. Show is weird.