I actually slept relatively decently, which came as a surprise since our ghetto AirBnb didn't have air conditioning and it was pretty warm. Alarm went off at 7, and we were out the door within 45 minutes. I stopped briefly at the cafe next door to text Ben that we were heading to the airport. Light rail and train was easy getting to the airport, and we arrived in plenty of time.

We had to stop at the Qantas desk for our passports to be verified and were through security pretty quickly. Only real issue was Juju's stuffed koala setting off something, so Lisa had to fight with airport security to get it back. Apparently, Lisa had filled out the Visa form wrong, so they both had to be screened a second time. Sydney's airport was a bit of a maze, and we had a hard time navigating through the never-ending duty-free store.

We boarded about a half an hour late, but considering the flight next to us was delayed over three hours, we were fine with it.

I was hoping to sleep on the plane, and even took my second Ambien, but no luck. I watched half of "What to Expect When You're Expecting," "Toy Story 4" and about 8 episodes of Game of Thrones. Even with all our departure delays, we landed close to on time. 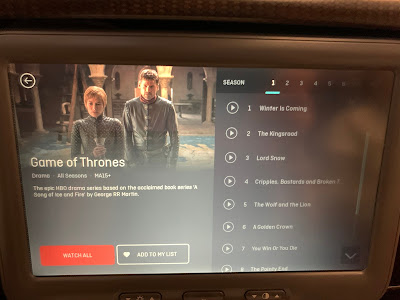 Lisa's flight was delayed to Austin, but ours was on time. We had to go through customs, passport control and then back through security. We were in a different terminal, so we separated and headed to our gate (yep, the same annoying one where we had to take a shuttle to get there). Ariel managed to fall asleep while we waited. I didn't, and watched three episodes of Atypical.

Our flight to Denver left on time, and I watched the rest of "What to Expect" on a really choppy flight. The turbulence coming in was horrible, some of the worst I have ever experienced. We landed over 30 minutes early, and thankfully Ben had been tracking our flight and we were able to meet him right away.