Gunnison is a teeny tiny place and our hotel was only about 6 minutes from the start line. My race started at 8:00, and I wasn't sure what the parking situation was going to be like, so ideally, I had wanted to leave around 7. Breakfast was put out a just before 7 and we decided to eat at the hotel. Then I was texting with Natalie and we decided to stop by her hotel (right next door) to before heading to the start so A could borrow a bottle.

We ended up arriving at the start around 7:15 and it was PLENTY of time. We checked in and got our shirts, bibs and shoe tags. Per the norm, I cycled through the bathroom line a few times. All of a sudden, the gun went off and I hadn't even started my watch yet. So, I was literally last to cross the line. Again. The 50K and 28K were starting together, so it was going to be hard to tell how far back I was actually going to be until the course split.

It was only 16 degrees when we started, but I made the decision to forgo the long pants because it was supposed to be pretty sunny and I knew the course was very exposed. I only kept my gloves on for about a mile, and my long sleeve top for maybe the first 10. I was glad I had opted for thin layers.

Anyway, this course did not mess around. The climbing started immediately. I knew it was going to be a long day (at best) and a short, horrible and tragic day at worst (if I DNF'd for missing any cutoffs).

The biggest problem I had going into this race was going in blind. I only realized about a week out that the course had an 8 hour cut off (with 4500' of climbing). I was concerned because the last few 50K's I have done had substantially less climbing and took, me between 7:10 and 8:15 to complete. Bah. And then, to mix it up, there were also aid station cutoffs. There was NOT, however, any mention of what MILE these aid stations were at.

So anyway. I'm running the best I can, which basically means running the flats and sorta jogging the less steep climbs and power hiking the rest. I know for sure that I have NO time to be screwing around, so I was not able to enjoy the course as much as I would have liked, BECAUSE I WAS WATCHING MY GARMIN THE ENTIRE TIME. 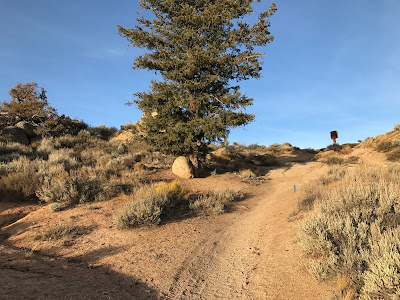 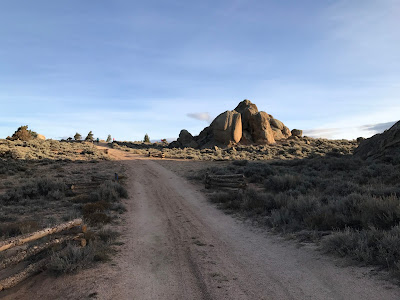 I felt like there was a TON of climbing in the first couple of miles - maybe nearly 1000'? The trails reminded me a lot of what I'd run in Utah. Then we hit our first ridge - it was nice to finally be able to "run" - although it was a lot rockier than I thought it would be. For all the local Colorado people, it reminded me a lot of Green Mountain. So even on the "flatter" sections, I really had to watch my feet because of the loose rocks and bigger boulders. 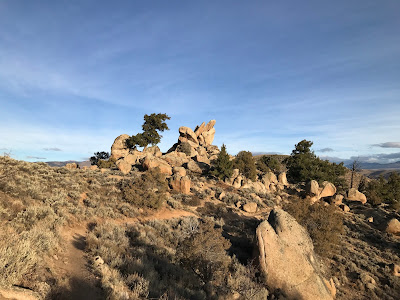 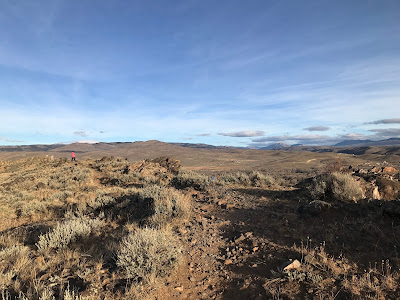 We finally got a bit of downhill and I managed to pass a few ladies. Then somewhere around mile 3 I noticed a woman sitting by the trail and my friend Rich standing next to her. She had fallen and thought she broke her ankle. Luckily they had cell service - although we weren't in the most accessible area. 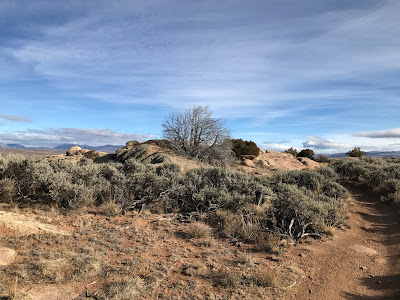 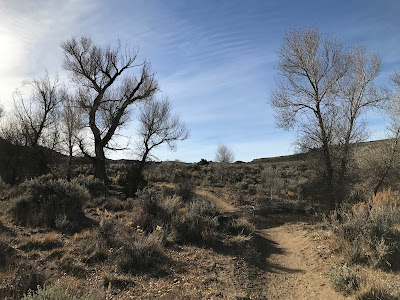 It seemed like forever before we hit the first aid station - which of course was a the top of a hill at the end of a dirt road. I only grabbed a cup of soda before heading out. I had caught up to Rich and Stella, although they both took off and passed me. I did manage to catch Stella later, and we actually ran together until the second aid station. 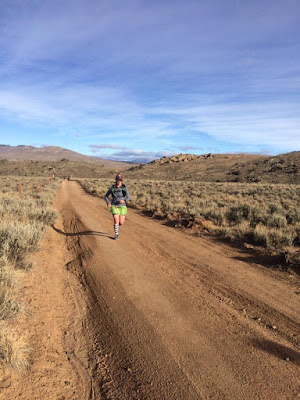 The second aid station was much further away than I thought it would be. And I knew the first aid station cutoff was still TWO aid stations away!! They thought that from there (I think we were around mile 11), that it was still 5 miles until the third aid station. I WAS SO ANNOYED. I did not take any pictures between the two aid stations as I had zero time to screw around. I finally got to the third aid station at around 3 hours 15 minutes into the race, at just over a 14 minute mile pace. I remember yelling "please tell me THIS is when the cutoff is." The volunteer said that it was "the next time around" and it was only a 2 mile loop, and if I missed it by a few minutes they would let me through.

Well.... let me tell you something about these two miles. We headed up the road and then down. INTO THE QUARRY AND THEN HAD TO RUN BACK UP IT. UGH!!! 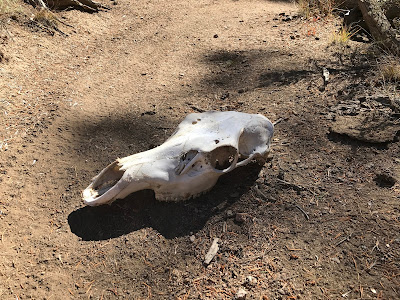 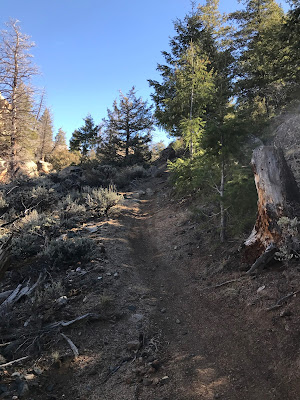 So by the time I got out, we had done a LOT more climbing, like according to my watch we had already done about 2/3 of the climbing on course. So aid station 4 was about halfway through the race, and I missed the cutoff by about 8 minutes. I stopped only long enough to fill my bladder and head back out. I couldn't believe how tight the cutoff seemed. I was not messing around, the course was challenging, and I was well ahead of the overall course cutoff. 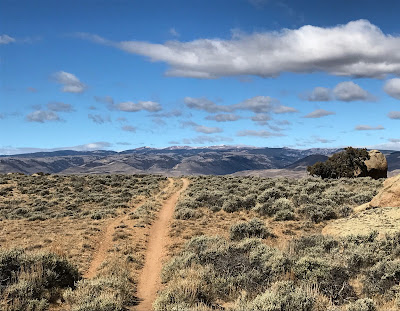 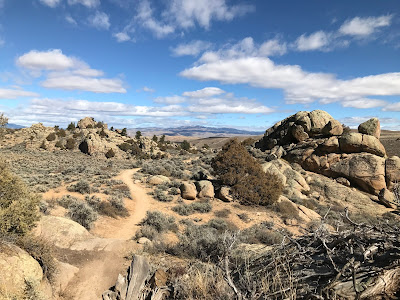 I was pretty cranky the rest of the race. I was running every section that I could. My ankle was holding up, I was drinking enough, taking in salt. (I did realize after that I probably didn't eat enough though).

I knew there was still one more aid station cutoff. I got to the aid station at mile 5, which was the one where the volunteers all dressed up and was the most festive, with less than an hour until the cutoff at the 6th aid station. They thought it was about 5 miles until that one too. DAMN IT. I was not happy with having to STILL keep an eye on my watch. Took only a handful of pictures and kept plugging away. 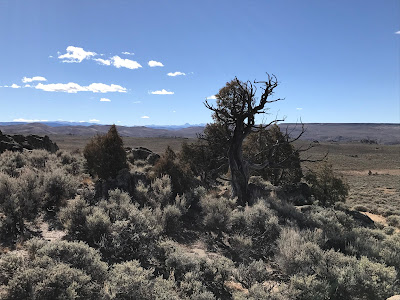 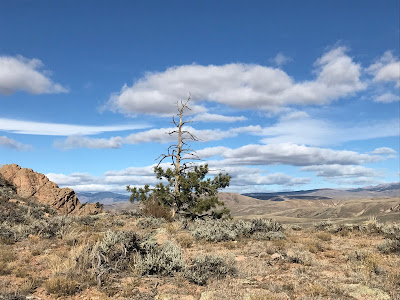 There was one woman that was right in front of me and when we got back to the aid station we realized we had like 90 minutes to finish. I thought to myself... PLENTY OF TIME. UGH UGH UGH. By now my ankle was kind of pissy. Some of the more rocky sections really bothered it. In my head, I thought I had heard some people saying the last two miles were downhill. And then we came up on another section of MORE CLIMBING. Looking at my watch we had already done all the climbing we were supposed to - why was there MORE?? Finally hit the top and then I'm down to like 25 minutes until I'm out of time. I see this sign and think... I'm going to DNF on a trail with my same name. 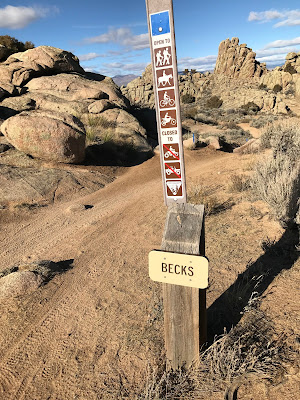 So I finally have some downhill. Only the grade is so steep that I can barely move! My quads are screaming from pushing so hard earlier in the day. It was so steep and I was having a hard time controlling keeping myself upright. The course was in the shade and in a rocky area so I had to take my sunglasses off so I could see where I was going. Less than 10 minutes to go. I am literally shouting how pissed off I am and how much I am hating this course. I don't recognize where I am, but it seems like I should be close - unless the course was long. FINALLY I come to an opening and I can see the finish line!!! I have less than 5 minutes now, but I am so close!!! I know I can make it. I am nearly in tears because it hurts SO.MUCH.

And then I see the blue flags are leading us around the parking lot?? Damn it. Why. I see A and she tries to run me in. I see the clock and it says 8 hours - but since it was chip timed, I was still under. I enter the chute at exactly 8 hours and I'm done.

The volunteer that took my timing chip asked how it was and I couldn't say anything except "HORRIBLE."

Pretty sure I have not been so stressed out in a race since I nearly missed the cutoff at my first 50 mile race. Never again. 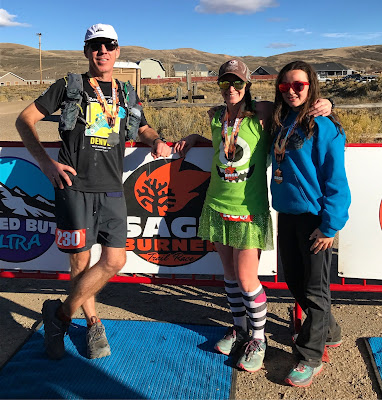