Tuesday (13,915 steps) - Barre with Sasha.
Wednesday (21,820 steps) - Met up with FRXC at Lyons Park in Golden for the scariest Wednesday night run yet... Chimney Gulch. I knew it was going to be hilly, but what I didn't really know was that this trail is the trail way to get up Lookout Mountain. Oh boy. Run started easy on the bike path for maybe a third of a mile before we eased onto the trail. There were two groups running - one that was "faster" and going to go all the way to the top of Lookout, and the shorter run was going to go to the saddle. Of course we were going to go short! There were only 5 of us (with one that was going to run even shorter) and they were nice about waiting. The early climbing was actually the worst, and I found that I was able to jog a decent amount as we got closer to the saddle. I think the view was worth it! We then headed up an even steeper section (A said, "and this is why we have switchbacks!") to get a view of the valley. 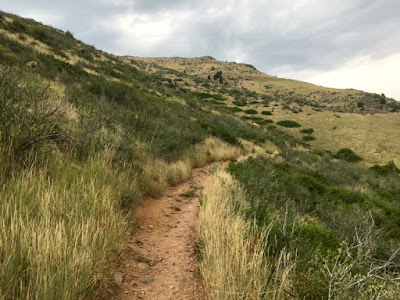 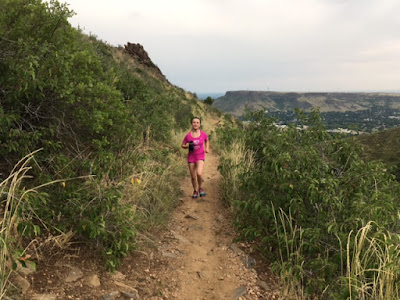 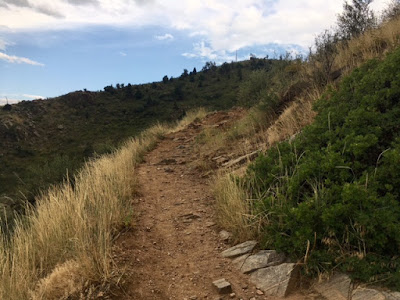 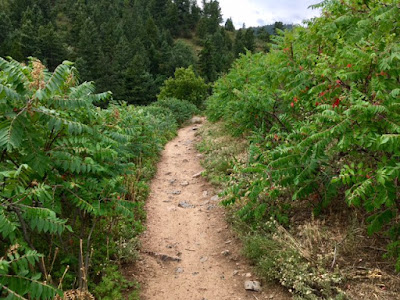 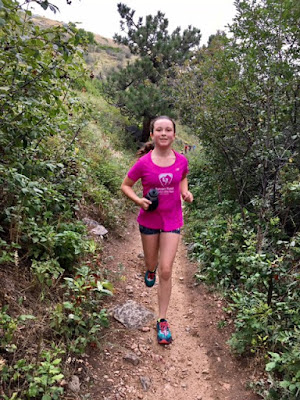 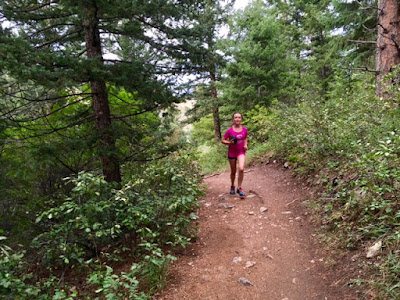 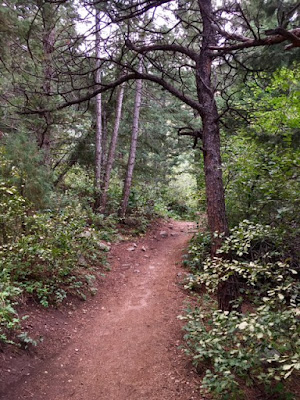 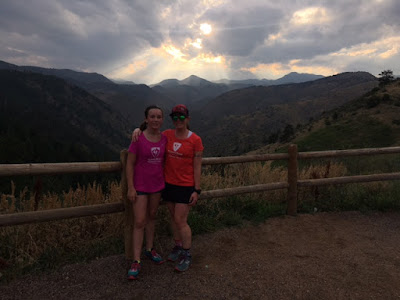 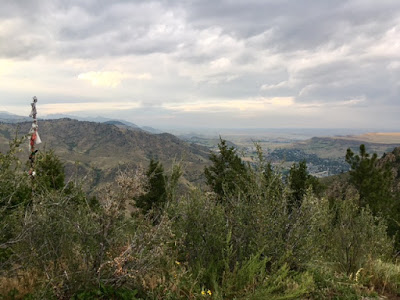 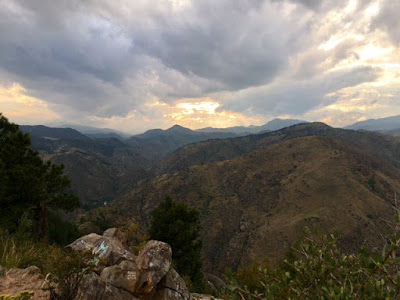 Met back up at the saddle (the group that had gone long was there waiting) - took a group picture and then had a glorious run down. 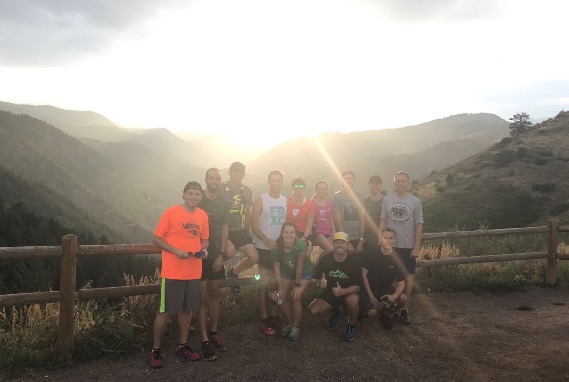 The weather had looked a little sketch, but we only had a little sprinkling on the way up - which really helped to cool things down. I can't believe how much we have lucked out with our trail running this summer!
Thursday (15,394 steps) - Barre with Sienna. Surprised to have Ben in class this morning. I had every intention of walking at run club, but Dulce was in the mood to run. It was a slow pace, but surprisingly hard. I guess not THAT hard after a crazy hilly trail run and a barre class. 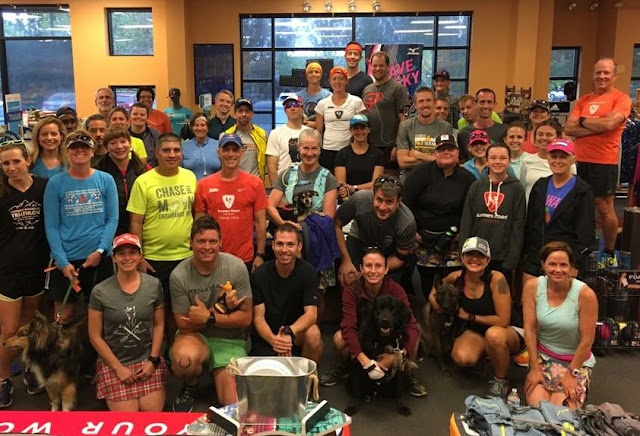 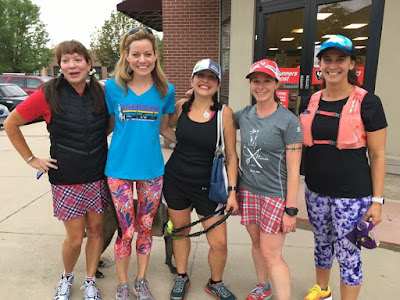 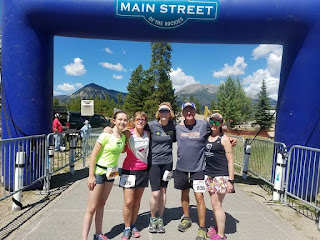 We stayed after the race talking to Tom and Lynette until after 1:00 - we were the very last people there! We weren't able to check into our campsite until after 2, and the weather looked iffy, so we decided to drive into Breckenridge to walk around. We went into a few shops, didn't buy anything (other than a mini personalized Colorado license plate for A). Around 3:00 we decided we were starving, so we stopped at the Flip Side. It was still fairly nice out, so we asked for a seat on the patio. We both got burgers and shared an order of truffle fries. About halfway through lunch it got colder and started to rain. Camping was seeming like a bad idea. By the time we walked back to the car and actually drove to the campsite the rain had stopped and there were blue skies. Thankfully we had reserved a spot as the campground was full! I "helped" A set up the tent, and then we just sat in our camp chairs and talked. Just before sunset we drove into town so I could have a "new-to-me" beer (which was tasty). In bed shortly before 9. 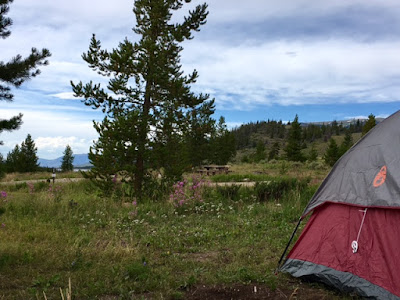 Sunday (33,113 steps) - Up at 5:30 to break camp. Left right as planned at 6 to drive to Beaver Creek. Made a quick stop in Silverthorne at the new Dunkin' Donuts for coffee. Arrived just after 7 and headed to the start for the Beaver Creek half marathon - recap to follow. 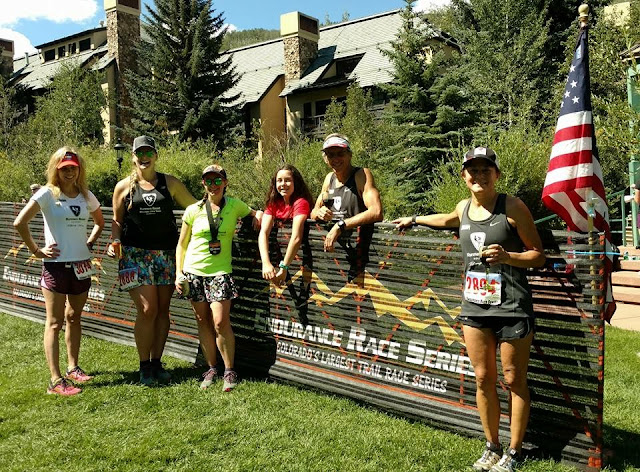 After the race we drove back to Breckenridge. We met Daniel at the gondola only to discover it was closed for lightening! Luckily the rest of the gals had not checked in yet and they drove back down from Peak 8 to pick us up. It was a TIGHT SQUEEZE getting all of us into a Pathfinder.

We spent a few glorious hours in the hot tub (first inside, and then we moved outside when the skies cleared again), before going
into town for a very late lunch.
After we all got dropped off at our respective cars, A and I went back into town to pick up cookies (that we planned on saving until we got home). We left Breckenridge at 5:15 and I was fully expected to spent the rest of the day in mountain traffic. It was a blissfully "short" drive as we got home just after 7. Unpacked the car and still had some time for TV before bed.
Monday (17,334 steps) - It was stormy in the afternoon again, but thankfully it cleared up so we could go to the New Terrain run club. This time Dulce and Matilda joined us! After our weekend of racing I let them know that we would be hiking the climbs and they didn't need to wait for us at the trail junctions. Dulce had never been to North Table, and I was really glad to hear that she liked it! 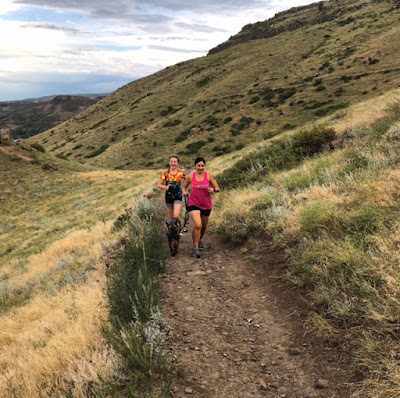 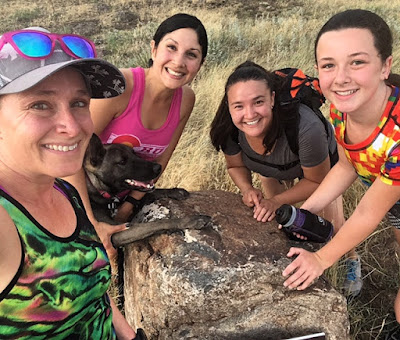 Skipped sticking around for a beer since we desperately needed to go to the grocery store.