Even though the Beaver Creek half marathon is a beautiful course, I was dreading it. I'm slow right from the start because the first few miles have allll the climbing.

This year, there was an early start option for walkers. After having the course bike medic/sweep on my tail all race LAST year, this seemed like a great option. I met up with Stacy, Annette, Daniel and Michelle to start about 20 minutes early.

For some reason, I ended up being the rabbit - at least for the first mile. Just as much climbing as I remembered. I was hot, out of breath, and tired after running the day before. What I *did* have this year, that I didn't have last year, was people to run with! It made SUCH a big difference.
The aspen grove did not disappoint (it never does) - and for once, it was nice to not have to keep moving off the trail. Since we had done the early start, we were way ahead of everyone. That didn't make it any easier, just less annoying. 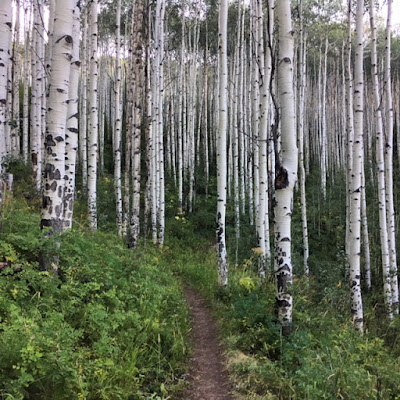 The next section is my FAVORITE. Nice downhill on the road - which makes me feel like I'm a real runner (after the huffing and puffing I do through the aspen grove). 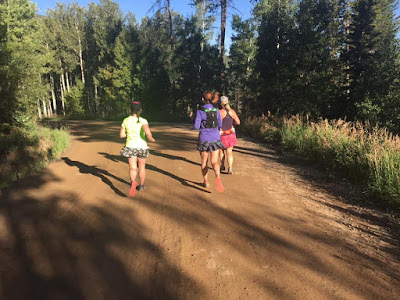 Allie's way is a beautiful wooded section where we can really FLY... well, kinda. Some sections are fairly steep, and there area  lot of tree roots. But at least I can actually breath here.

We then come out onto the slope, up the road, and arrive at the second aid station (which has moved to where we first enter the 5 Senses trail. This is when we get passed by the first half marathoner, who just happened to be Sean, my teammate!

The 5 Senses trail isn't too bad, some rocks and roots. Then we move onto what I would argue is the "worst" part of the course.  We move onto the road briefly before getting onto an ATV trail. More single track after we cross another slope, then an out and back up the road, and then down a wide dirt road into the finish.

Did I mention that the half marathon is a double loop and we get to do it all over again?

At least this year, there weren't already people in the finish line enjoying their mimosas. It made it a teeny tiny bit easier to go back out the second time. By now it was really heating up and I was super tired.

For some reason, the second loop seemed to go by a bit faster (although I was definitely slower). I took more pictures the second loop. About a half mile into the second loop - who do I see? Ross! Our nearly 80 year old friend from Arvada! He had taken an even earlier start (7:00 am), but he had also run the Rocky Mountain half the day before. When I grow up, I want to be like Ross. 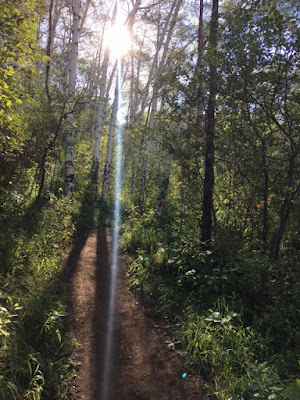 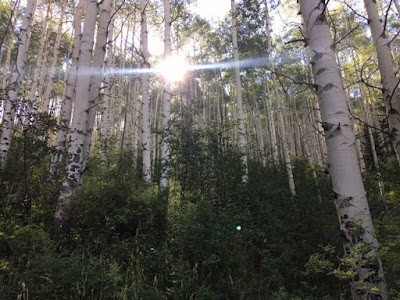 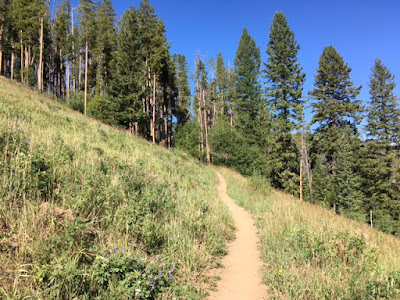 The next two pictures are from Allie's Way. I've never stopped long enough to take pictures in this section (this was the 3rd time I've run this event) because I've been RUUUUUUNNNING the downhills). However, it's so pretty, I figured I should take a sec and share it. 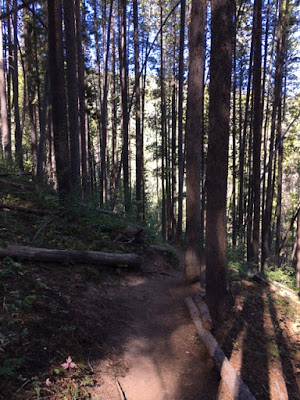 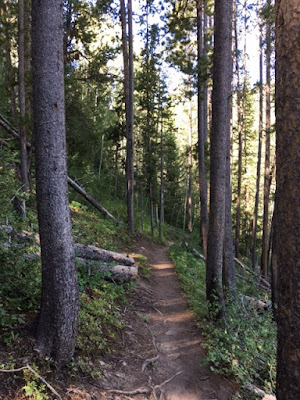 I managed to get ahead of Michelle and Annette at some point after the 5 Senses trail. The ATV trail that seems so long and hard is actually really pretty! 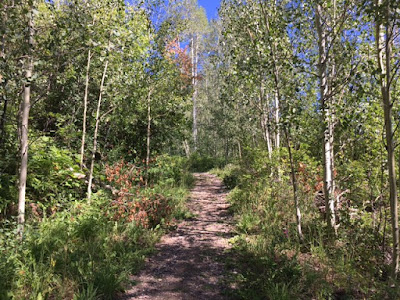 I was EXHAUSTED by the time I had to do the out and back on the road again. By now, I was getting caught by the mid-packers that had started with the gun. My legs were so shot that the glorious downhill I normally enjoy was actually pretty painful. Impressed that I was actually able to run it in.

Stacy was at the finish line cutting off shoe tags, which meant that she had dropped to the 10k. Jeff had another shipping error and there weren't enough medals for everyone, so we agreed to wait to collect ours so that others could get them instead.

Picture with the team at the finish.
A had been volunteering at the finish line and the food tent (which is her favorite). I actually grabbed some food and sat down to eat. Not normally something I've been able to do at this race. I had saved one medal from the finish line to give to Ross - which he seemed to appreciate.

Last year, the course measured 12.4 and my time was almost 10 minutes slower. There are a ton of trees, so the "short" course measurements are not a surprise. Happy I wasn't slower than last year, but again, I was injured last year, so this wasn't anything spectacular.