Tuesday (12,963 steps) - Can I just ask how is it AUGUST already? Barre with Sasha. Which was a surprise when I signed up because she has always taught at noon. Turns out that Gabi, one of my favorite instructors, is MOVING. Wah! Not that Sasha is bad, I just hate change. Weren't sure when else we would have time, so A and I baked our mini cheesecakes for the upcoming RMRR potluck. 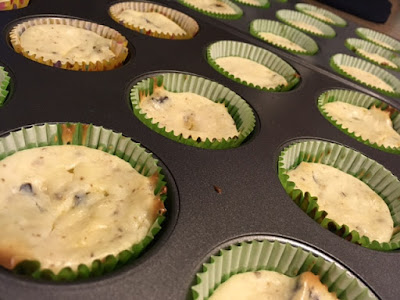 Wednesday (15,875 steps) - Got a FB message that my morning Sculpt class with Kelly was cancelled. I promptly went back to bed. Denver Roost run club after work. A and I actually ran the short Wash Park loop, although it was every bit a struggle for miles 2 and 3. Bah. Spent a bit talking with Milan about Chamonix and his upcoming trip for UTMB. Someday I'll be a strong enough runner for trails like that! Alison was also there for the first time in ages, so we chatted a bit too.
Thursday (13,523 steps) - Barre with Sienna. First, she was "late," she didn't show up until 8 minutes before class. This neighborhood is not the greatest, so I was unimpressed with waiting by myself. I also did not love her class, which is unfortunate with Gabi leaving. We had planned on going to Belmar run club, but traffic was so awful that it just wasn't possible. Actually kind of nice to have a night at home!
Friday (16,454 steps) - A went with a friend and her family to go camping for the weekend, so I headed to the RMRR August 5K and potluck by myself. There were a few people from Belmar that were running with RMRR for the first time, so they didn't have handicap scores and would be starting at 0:00 with me. 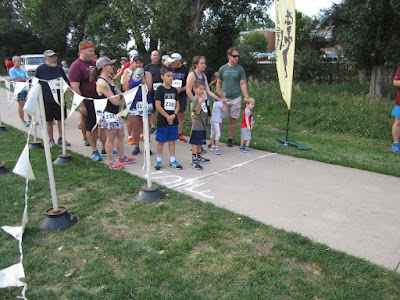 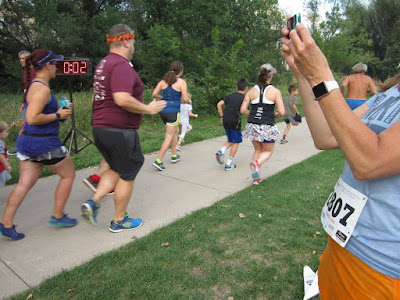 The first mile or so went fine for me, but as is the norm, my calves and thighs basically exploding about 15 minutes in and I had to take a zillion walk breaks. The best part of the evening was obviously the potluck! My mini Thin Mint cheesecakes were a hit and I didn't get out of control with all the food. 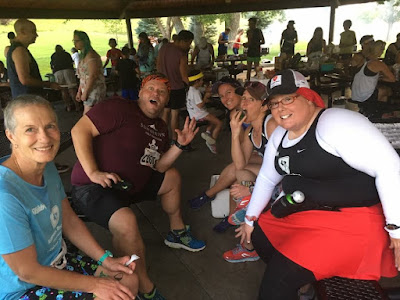 I had a great time with everyone, but headed home around 8:30 since we were way down in Littleton and I had to get my aid station ready.
Saturday (30,156 steps) - Missing A when I had to set up my aid station solo! These 5 gallon jugs weigh a TON. The run was out of Runners Roost Lakewood and was set up for a max of 10 miles. I struggled a bit around mile 2 (which again, is pretty normal). Never really felt great during this one, so pretty proud of myself for doing the full ten miles. 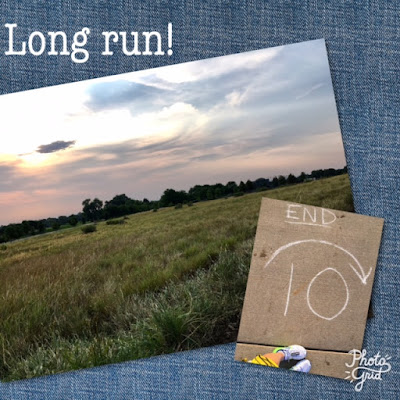 Went home for a quick shower and breakfast and then drove up to the Boulder Reservoir to volunteer at the Boulder 70.3. I think that this was my sixth year volunteering - these are my favorite events to work! I was set up to be at the information tent with Jeannene again, and had a bit of difficulty actually finding it. Spent a lot of the time spectating and cheering, with a few random tasks thrown in. Headed out around 3:30 because it looked like it was going to storm. Took over a half hour to get out of the reservoir because apparently, everyone else left at exactly the same time. Stopped at REI to look at coolers, horrified by how expensive they were, opted to just pick up some Tokyo Joe's and veg on the couch. Finally finished watching Bates Motel - the series finale was just nuts. In bed a bit later than planned.
Sunday (18,025 steps) - Up just after 4 to head to Lisa's house. Got there right at 5, and we headed up to Summit Lake. We had planned on hiking forever (literally the first weekend day ALL SUMMER that we were both free) and we decided on going for Mt. Evans since A was going to be gone. The forecast had looked pretty sketchy all week, but since we were very limited on availability, we opted to head up at sunrise and hope that we could summit and get down before the storm. We were annoyed that the park fee was $15 instead of the $10 that EVERY SINGLE WEBSITE SAID IT WOULD BE. So instead of $10, we had to pay $20, since we didn't have enough change. Arg. On the drive up we saw a fox, the first of a TON of wildlife we would see. 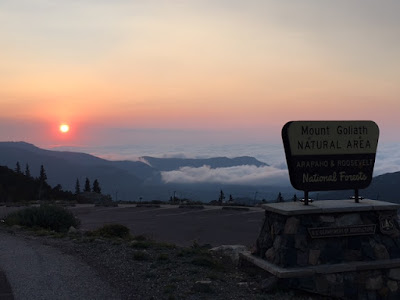 We started the hike around 6:30. It was COLD when we first headed out, and I was concerned that I had not brought enough warm clothes. Luckily, as we got out of the shade, it warmed up. I must have changed my layers 10 times throughout the day though. This was also the least crowded of any hike I think I have ever done, even including local ones. For much of the day we were alone, with maybe just a couple people within sight. It was nice! The Mt. Evans trail was also incredibly well marked, unlike some of the other 14ers we have climbed. The route guides said the route from Summit Lake was five miles round trip, but I measure it at 6.5 miles. 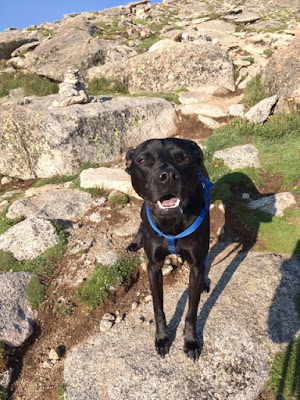 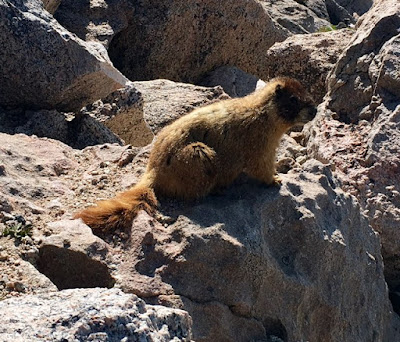 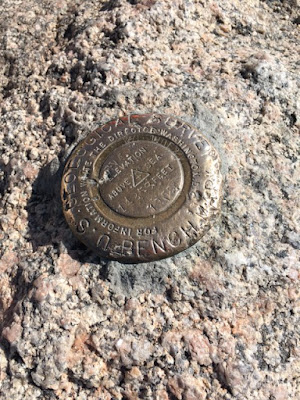 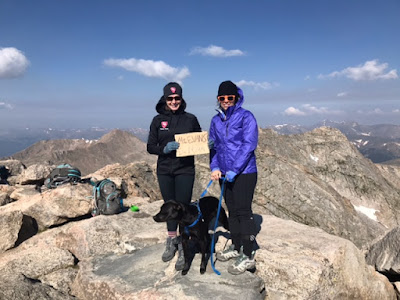 The weird thing about this 14er is that people can actually drive (nearly all the way to the summit) and then just walk up a few tenths of a mile to the top. Even up there it wasn't that crowded, but it is a weird vibe to have been hiking in solitude and then see a bunch of cars when arriving at the top. I did, however, appreciate a bathroom!

On our way down we saw a ton of mountain goats. Lucky got a tad too close and we had a few hairy minutes while a gang of them stalked us. Luckily, they lost interest. The way down didn't take long, and it warmed up substantially. 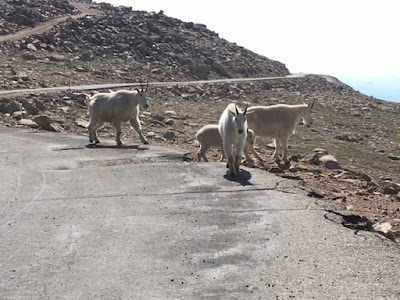 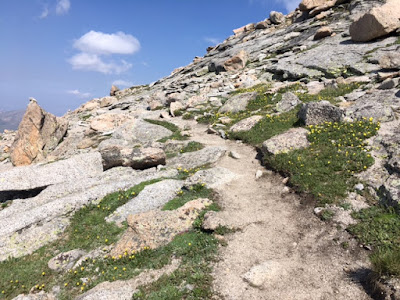 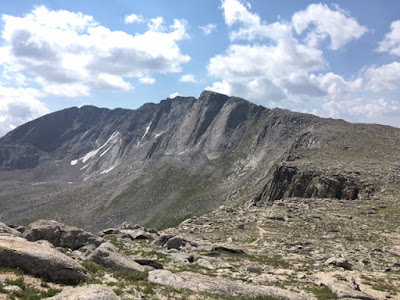 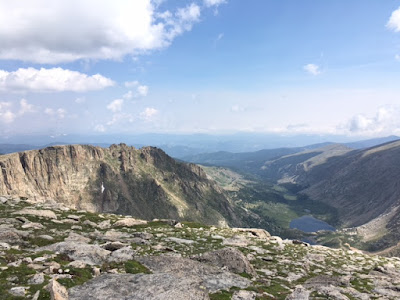 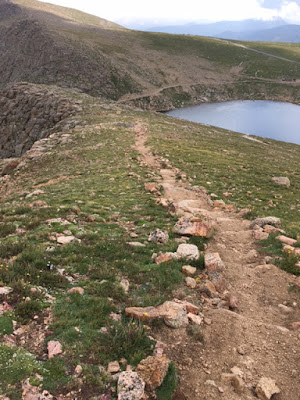 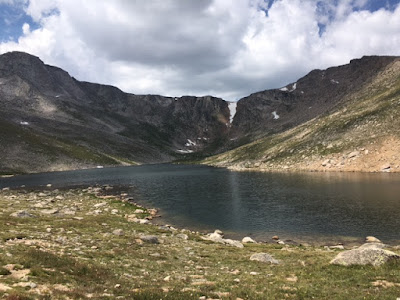 We had estimated the hike would take maybe 4 hours round trip, but it actually took closer to 5, and it was almost noon before we got back to the car. We shed all our layers, switched to flip flops, and drove into Idaho Springs for a lunch and beer at Westbound. I had a delicious lentil salad and small pour of an Imperial Stout.

By the time we got back to town it was after 3, which gave me time to go to the store. I finally heard from A's friend that they had hit a delay leaving, and wouldn't be back until after 6. That meant more TV time!!! Another call from them later was that the drive took even longer than planned, and they asked if I wanted to meet them all for dinner.

We met up at Los Arcos for some Mexican food, and as a result, we didn't get home until almost 8:30. Need a weekend from my weekend.
Monday (13,786 steps) - Most exhausted ever. Cold front came in overnight and it was cold (in the mid 50's!) and rainy all day. We had planned on going to the New Terrain / North Table Mountain run club, but it was cancelled last minute due to poor weather conditions. For the second time in a week we had an unexpected night at home.