Last year, Heather came out and ran the Black Hawk trail half marathon with me.  We took an early start and tied for DFL. It was a blast.

A few days before the race, Jeff emailed a few of us asking if we could carpool. I offered, since we were headed up anyway, as long as people knew that we would be arriving early and leaving late.

With that in mind, we met up with Chris at 5 am in the shopping center near our house. The drive flew by with someone new to chat with, and were parked at 5:40. That gave us plenty of time to pick up our stuff and get everything ready for the 7:00 start.
A began her volunteer shift with running race day registrations from the red barn to the timing guy, and I chatted with Annette, who was assisting with packet pick up. Phil arrived shortly before 6:30, and A and I helped him set up the tent. Before I knew it, it was time to use the bathroom and line up. It was lightly misting, and I hoped it would stay that way since I had not brought a rain jacket. 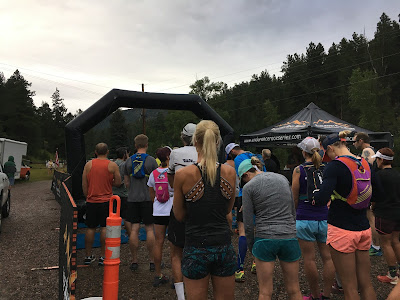 The race started just a minute or two late, and I was in the back. Since we had done the early start last year, I didn't realize how much bottle necking there would be in the first quarter mile. Didn't bother me though, since I don't typically warm up for a few miles, and I was fine keeping the pace slow. We moved off the single track and onto the road. Quite a few people passed me in this section. When we turned to go onto the jeep trail, I was in second to last place, with only Francesca behind me. She caught me at the first aid station, and we sorta ran together for maybe a quarter mile. About when we hit the first mile marker I stopped to screw around with my shoelaces, and she kept going. I never would catch her the rest of the day. 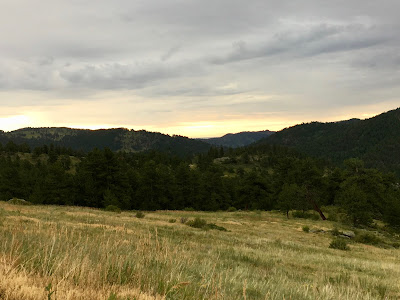 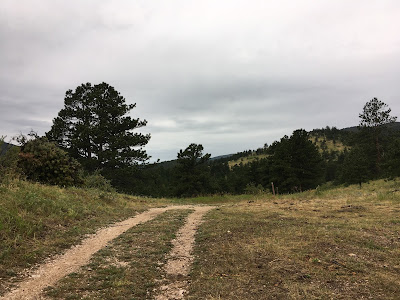 This section of the course has some pretty views, but I think is actually my least favorite part. There was some decent climbing, and then the turnoff for the 10k, and we kept heading out. The glorious downhill just meant that the uphill would come when we turned around. I managed to pass just one person on this climb. 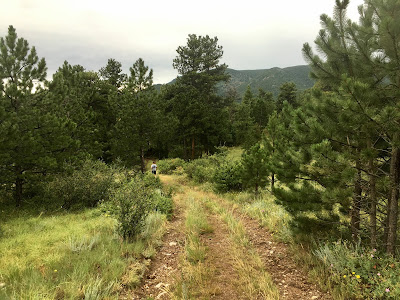 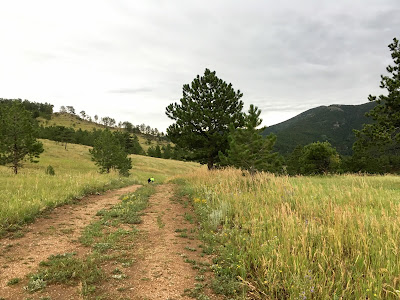 On the way back, I managed to spot Lynette and Tom as they were taking the turn. Came back through the aid station and then we got into my favorite part of the course. It is the most heavily wooded section and runs alongside a creek. There are lots of crossings, either with the option of a bridge crossing or going through shallow water. In most cases, I went for the bridge. 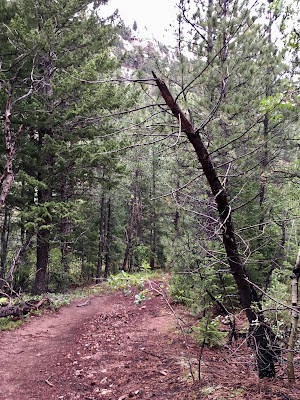 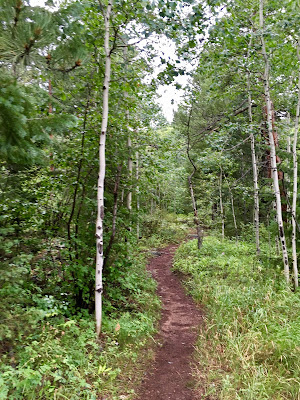 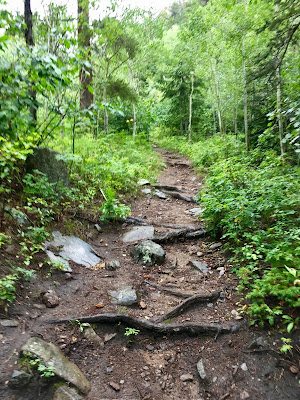 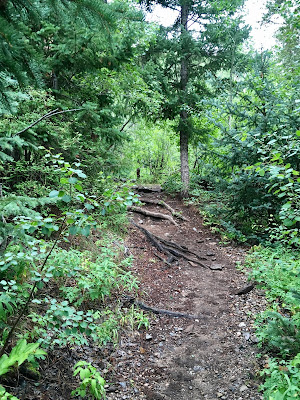 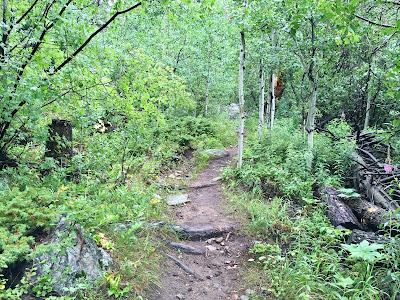 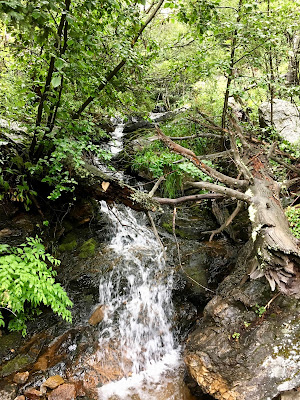 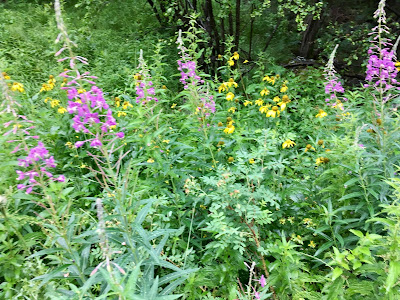 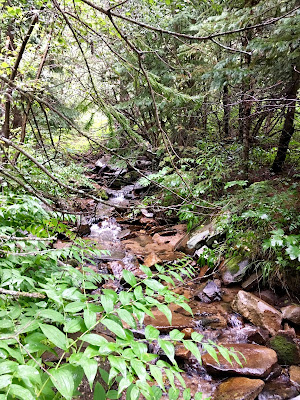 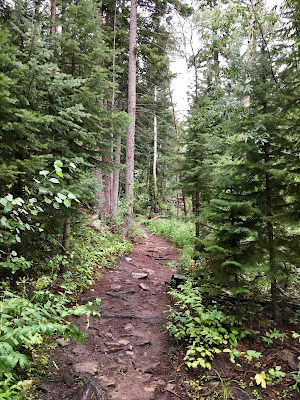 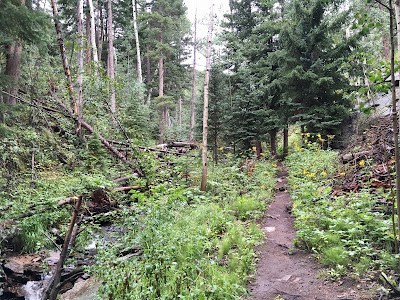 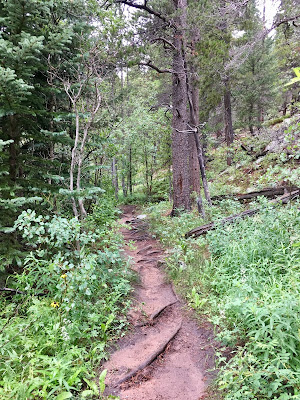 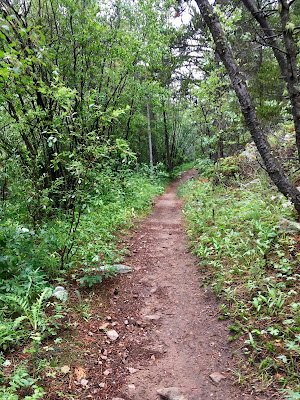 Then the most challenging section of the course - the switchbacks (which I think is when Heather was threatening to DNF last year). It was "hard," but not as hard as it felt during the Dirty 30 (which a lot of this course mirrored). 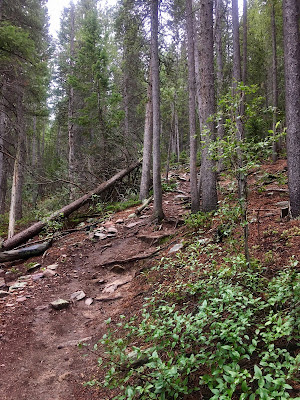 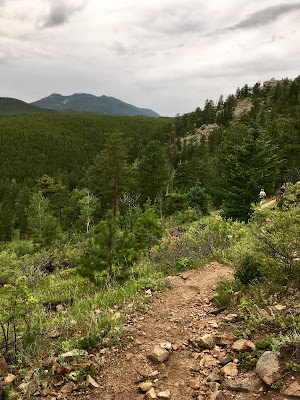 We had some nice downhill, and then when we got to mile 8, I could tell where the additional mile was added in that we had not done last year. Shockingly, it was a climb up, and then we came right back down. I spent a few minutes talking with a girl from Illinois - she was running her first half marathon ever - and what a challenging one to pick! 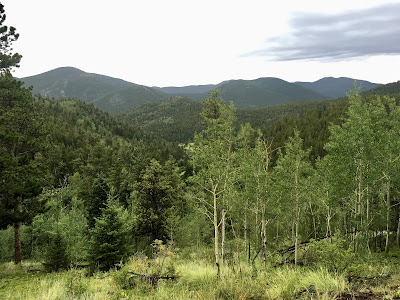 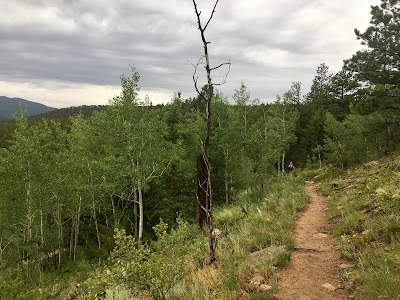 The course jumped onto the single track near the lake, which is really pretty with all the wildflowers. 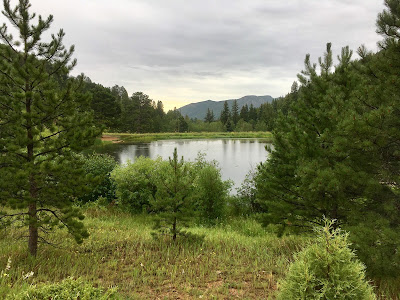 We then had to go down the trail to the road, hit up the aid station, then come right back up. I had seen Francesca at the turn around and she did not seem that far ahead of me. I never did see her again after that, so she must have really been moving up the hill. I chatted for a bit just before mile 12 with a man from Texas - these flatlanders are amazing to run these races! I live here and can barely breathe on thee climbs. Just after mile 12, I tripped over nothing and skidded on my palms. Luckily, nothing else happened. A few tiny climbs, but mostly downhill single track to the finish. 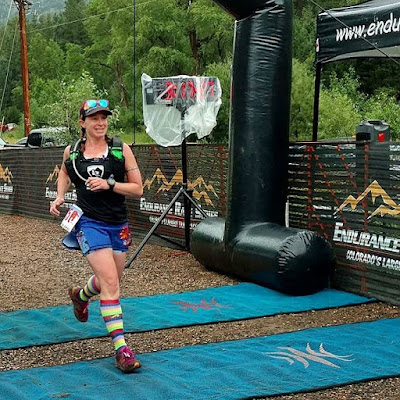 I didn't really have much of a goal in mind since I hadn't really "run" the race last year. I was pretty pleased to come in under 3.5 hours!

A, Phil, Francesca and Susan were at the finish line, and we quickly got in our team  picture. 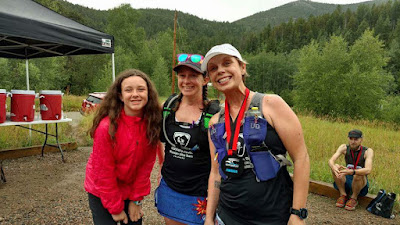 We then headed down to the red barn for the finish line party - this time, there was plenty of Avery beer left. I wasn't hungry (again), but had a beer before heading out. (By the way, the guy we carpooled with ran a 2:06 for his first official half marathon. Holy crap). 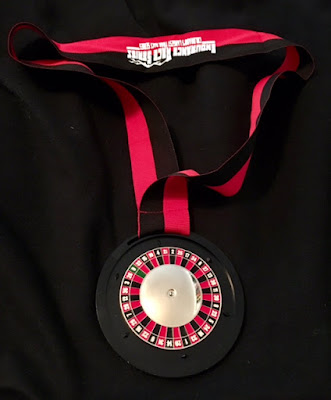