Tuesday (25,623 steps) - A had student council so that meant no speed work. I had 7 miles on schedule and planned on running before work. I could NOT sleep (or stay asleep), so when I looked at the clock and it was 4:30 I figured I might as well just get it out of the way. STUPID DAYLIGHT SAVINGS. It was dark when I started and dark when I finished. It was not the greatest run, but I've certainly had worse.
Barre during lunch with Laura. Pi day!! We had three types to choose from (chocolate cream, apple and cherry), but I decided to have a small slice of every kind. Why discriminate? A had gymnastics, and then back bend practice and dinner. 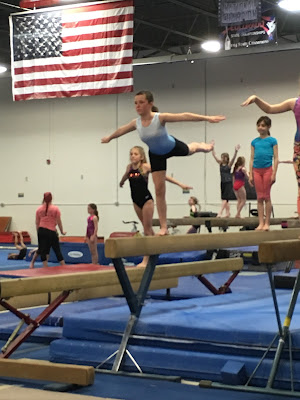 Wednesday (21,448 steps) - Run club! I had 5 miles on schedule and planned on running with Colfax. I suggested that A run with me tonight (since she usually walks with Mo on Thursdays). There was actually route (that I haven't run before) that would get all the miles in. Having a heat wave here in Denver and it was probably 70 when we started out. 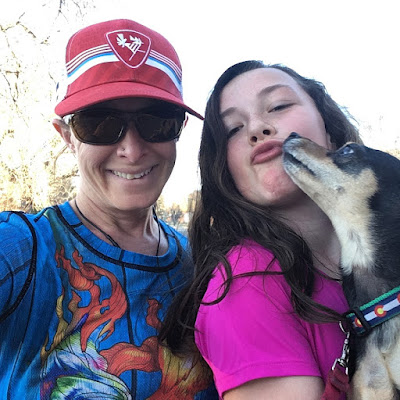 It's been a long time since it was that warm, and I forget that A is totally miserable when it's warm and she doesn't have water. The first 2 miles were fine, then it was just a long miserable slog until we were done. (Not just A, Colfax didn't seem into it either). Didn't care much for the route, lots of busy roads to cross, plus we had to cross I-25 ramps in a few sections. But, we got it done.
Thursday (21,436 steps) - Morning barre. Instructor was "late" getting to the studio, started class late, and I had to leave before it was done. Every minute counts people!!
Picked A up at soccer and then went to Belmar for run club. I started my run early again so I could be done in time for the raffle at the store. I didn't *quite* get it right, but I managed to get to the other park for more miles without having to cross busy streets. It was a hot, hot run. 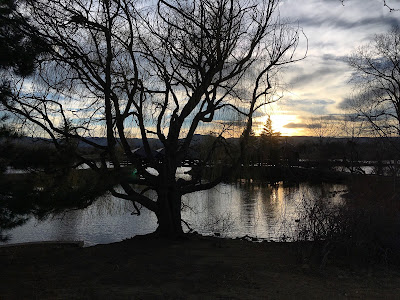 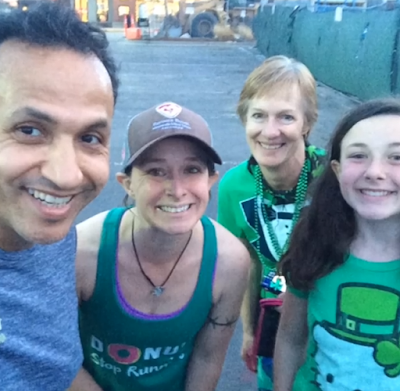 Friday (11,042 steps) - Rest day! Busy day with other stuff (that I don't want to post publicly about), so I ended up having to work late to get everything done and have all my hours in. By the time I got home I was starving and not in the mood to cook, so we went to Old Chicago's to use our BOGO coupon. I got a giant calzone and A got a little pizza. A had a major allergy attack during dinner so we had to go to the store to buy some meds. In bed early. 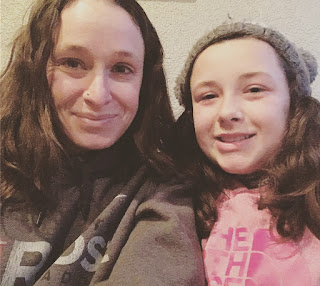 Saturday (32,800 steps) - Alarm went off without sound AGAIN!!??? We overslept by an HOUR for our run. Luckily, we had everything ready the night before so we were literally able to get out the door in 5 minutes. We arrived 17 minutes late. Super frustrating because it was supposed to 1). be stupid hot and we wanted to get done early and 2). we had somewhere to be early.

A had decided that she desperately wanted to run 13.1 miles. Yes, she wanted to do a long run of a half marathon distance. Her previous training run longest was ten miles, and she had skipped the run the week before. Looking at the course, she picked a good one to run long because there weren't many streets to cross and it wasn't very hilly. Based on our longer runs, I had estimated that it would take us around 3 hours.

The early miles were really good! We finally caught up to Pete and Janet about 3 miles in. A few miles later, around mile 5, we both needed to use the bathroom, so we went off course about a tenth of a mile to go to 7-11.
Got a picture of A at the turnaround in the park, knowing that the way back was going to be harder for her. 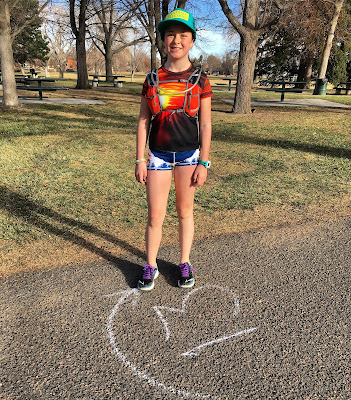 She did really great until we got to maybe mile 9 or 10. She struggles with the heat more than I do and was having a hard time keeping cool. 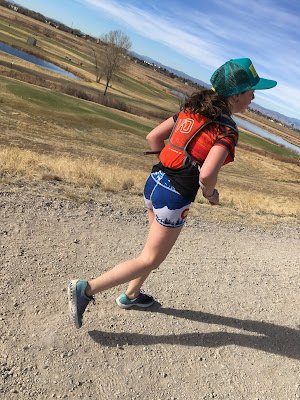 As we got closer to being done she really perked up. Fastest pace of the day was the last half mile to the finish.
Ran into Starbucks for a coffee refill and a hot chocolate for A, and then drove over to the Armory so we could help package up the donated cookies that we were sending overseas to the troops. Numbers were down a bit, but our girls still sold about 1200 boxes to donate. Impressive!! 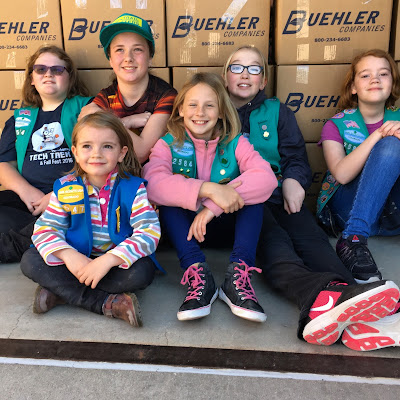 Boxing everything up took less time than we had planned so we were able to go home to shower before we needed to meet up with Jackie for lunch. We ended up chatting for almost FIVE HOURS!! Home for only a few hours before we went over to Jessa's for pizza and beers for her birthday! Out until almost midnight! Such a busy day.
Sunday (34,766 steps) - I snoozed a few times but still managed to get up and out the door to start a run before 7:30 at North Table. I had thought about maybe going to run Deer Creek with Runners Edge, but decided that a 7:00 start and driving all the way to Littleton was too much since I had to be home early. I didn't feel great for the first half of the run and thought to myself that it was probably the slowest I had ever run the loop. I saw Oza near the parking lot on the west side, and the last 4 miles actually went pretty well. I was really surprised when I looked at my stats later and saw a lot of segment PR's on strava. 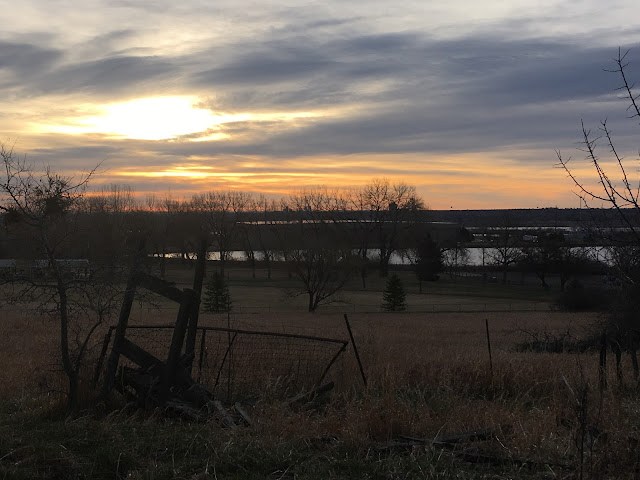 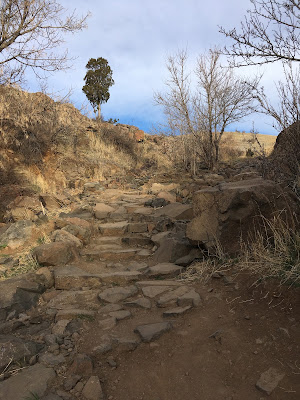 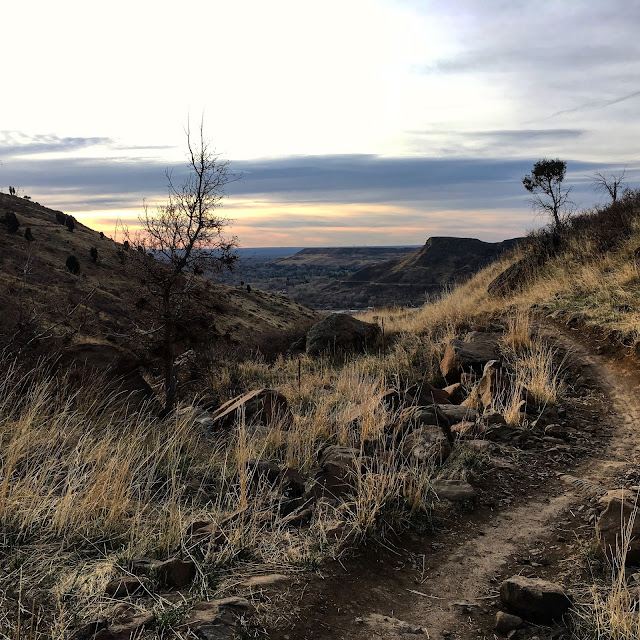 Stopped at Sprouts for some groceries, got gas and a car wash and then barely had time to shower and eat a sandwich before we had to leave to drive to Bailey.

Tomahawk Ranch, one of the Girl Scout camps that A goes to, was having a "Centennial Campfire." I was actually surprised that she even wanted to go, since the premise of the event was to tour the facility - which obviously she has done because she has camped there at least three times. Apparently the allure of s'mores was enough to entice her. We got there in time for food, the ribbon cutting for the new arena, and a craft. A also took me on a walking tour of all the cabins she has stayed in, and we got to visit with some of the animals. I got selfies with most of them, A is apparently scared of goats though (this was news to me). 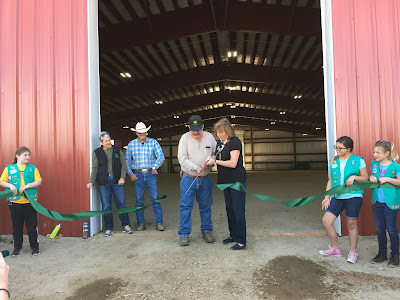 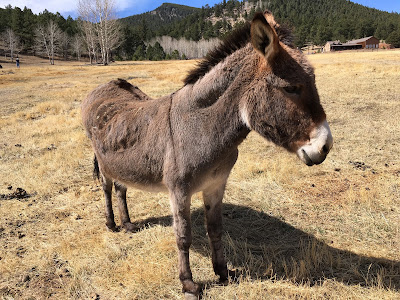 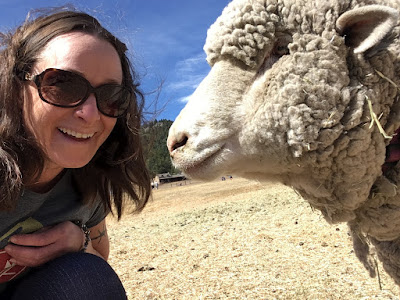 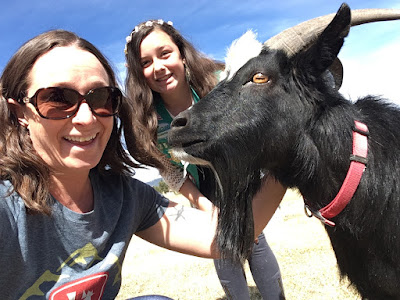 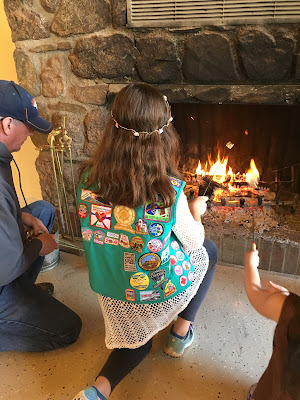 We left around 2:30 and headed to barre. After class we stopped to get some ice cream - have I mentioned that it was in the 80's this weekend?? (For reference, it was in the 20's and 30's on these dates last year). 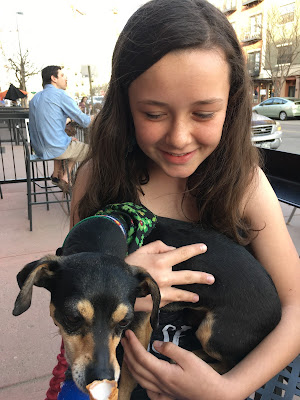 Monday (14,267 steps) - Morning barre with Karen. I liked her class - it was tough! I may be feeling this for another day. Kind of a stressful day at work with the first of the reassignments now that another paralegal/LAA is leaving. Womp, womp. Met A and her Girl Scout troop at Mint & Serif - I tried a new coffee - caputo! (Am I the only person on earth that is perfectly fine drinking plain, black coffee?) By the time we got out of there it was almost 7 so we did a quick trip to the store, dinner, bed.