This particular post is pretty "lengthy," and I'm not sure if I will continue this style or go back to more of a "training log" style. Over the last 9 months or so I've realized how much I refer back to my old blog posts as a way to track the highs and lows of training. So.... here ya go.

Tuesday (21,337 steps) - A few months ago I mentioned to A that our Runners Edge training included weekly speed work. OF COURSE, it is the only day of the week where she has student council, so we can't go regularly. She insisted that she wanted to go and since this week was on off week for her, so we got up at 4:45 (yes, you read that right) and drove down to City Park to meet up with the group. We were surprised to see coach Joel there (although it makes sense, he is super speedy). The group wasn't very big, which was kind of nice.

We started by doing a 15 minute jog to warm up. I barely made it thorough that part of the workout. My legs were TOAST after Moab and FYCO. We then did some plyos and and then headed over to the hill we would be doing ladder repeats. Surprisingly, the repeats were HARD, but not impossible. We started with 1 minute, then upped 30 seconds each one until we got to 3 minutes. At A's training level, we could have stopped there, but we did a second 3 minute one, you know, for fun. When I looked at my stats later, I was pleased to see that although SLOW, my second 3 minute climb was a tad faster. We hurried home, showered, I took A to school and I went to work. Took Laura's barre class during lunch. A had gymnastics and then it was home for dinner. Thankfully, I had pre-made dinner when we got back from Moab, so all I had to do was reheat. LONG DAY.
Wednesday (16,623 steps) - Special run club that was not out of the store. Instead, it was at Crazy Mountain brewery. They are the beer sponsor for the MUT team for a second year. We managed to find a parking spot across the street and chatted with people inside while we waited for the run to start. 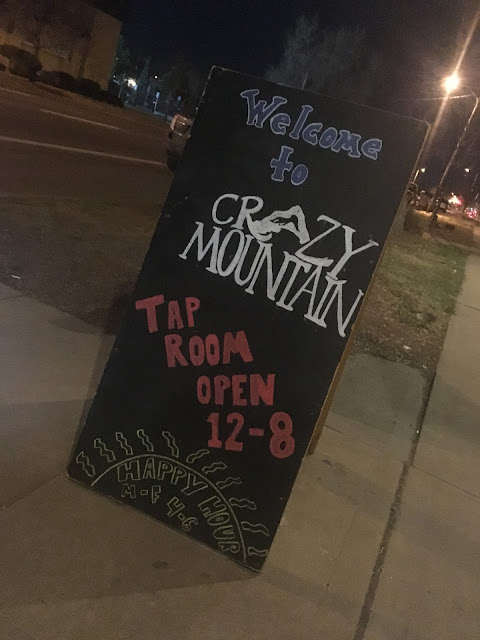 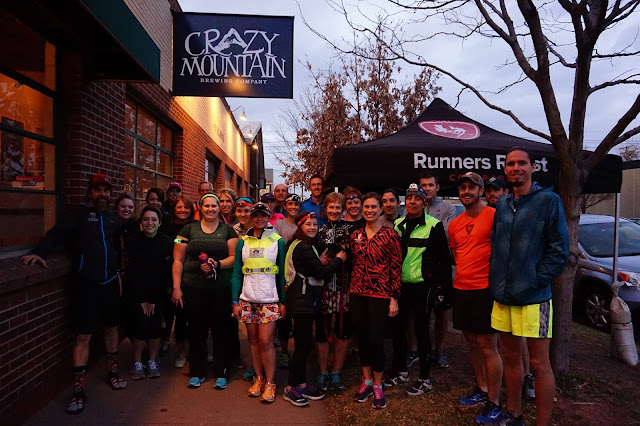 A and I ran with Colfax and a few other "slow" folks. I was glad we had someone else navigating, I don't know that I would have read the course correctly. Mo did, in fact, get a little lost and ended up doing 4 miles instead of the scheduled 5K. We had awesome $2 happy hour beer specials, and of course shut the place down, not leaving until after 8.
Thursday (19,498 steps) - 6 am barre class with Gabi. Gabi is a new instructor and I was hoping I liked her class. Turns out, I absolutely LOVED her class.

The forecast for the day was "possibility of snow" - like 30%. Turns out that it snowed ALL DAY and the roads were a complete disaster. Luckily, getting Belmar was NOT terrible and we decided to walk with Mo instead of run. One, because I didn't really want to run; two, because it was icy; and three, because we wanted to spend some time with Mo since we were skipping going to Rocko's. 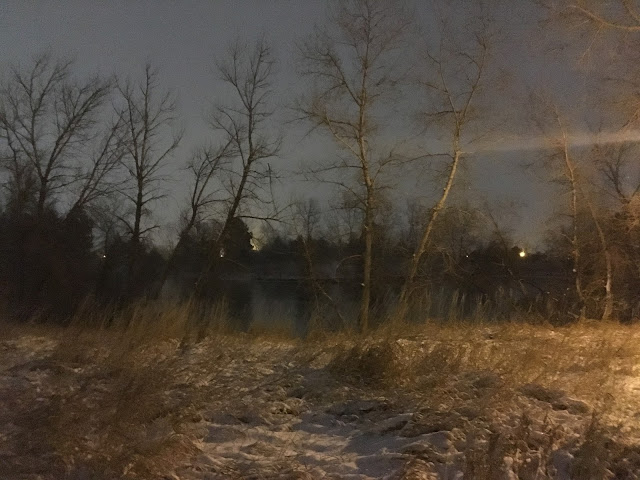 Instead of going out to eat we went grocery shopping and then CLEANED for two hours. A lot of work, but I finally feel like I can function in my house again.
Friday (15,354 steps) - A had a cookie booth after school, but I wasn't sure I would be able to pick her up and get her there on time, so Rose took her. Turns out she didn't think the clothes she brought would be warm enough, so she asked me to stop at home and get her hiking pants. The booth was super slow and we shut it down 30 minutes early. As soon as we got our email from Runners Edge we got all our aid station stuff ready and loaded into the car.
Saturday (31,043 steps) - It was a good thing we had done everything the night before. Somehow either my alarm didn't go off or I turned it off. We got up about 10 minutes (miraculously) before we had to leave. Our run was out in Aurora, and our aid station was at the 4 mile turnaround. We set up our aid station without any problems and got to the start on time. A decided that she wanted to run ten (!!) miles. The first 5 were fine and we managed to mostly stay with the group. She struggled a bit more on the way back, but honestly, she did really well! 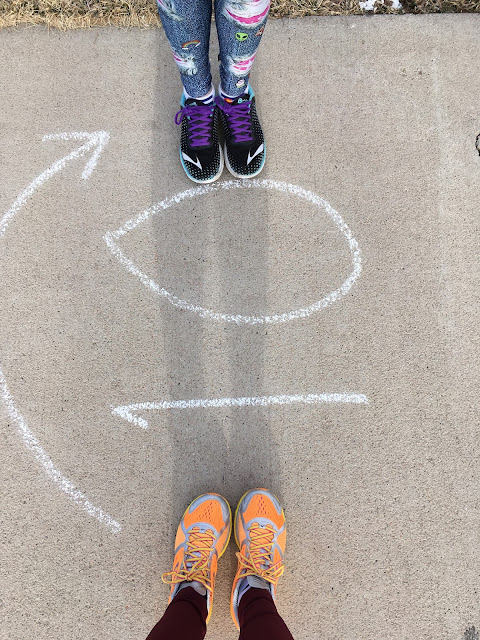 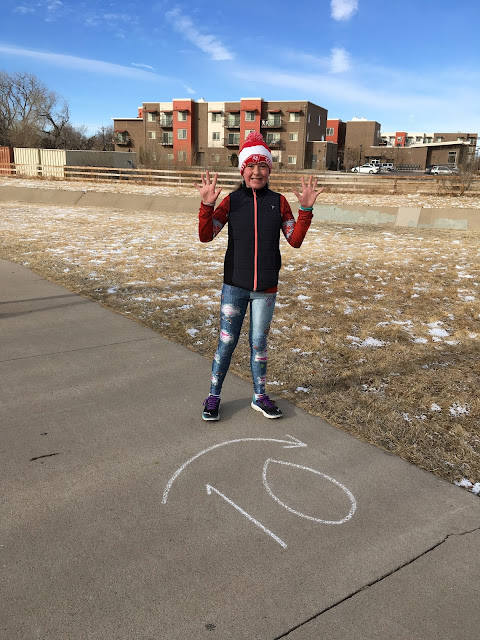 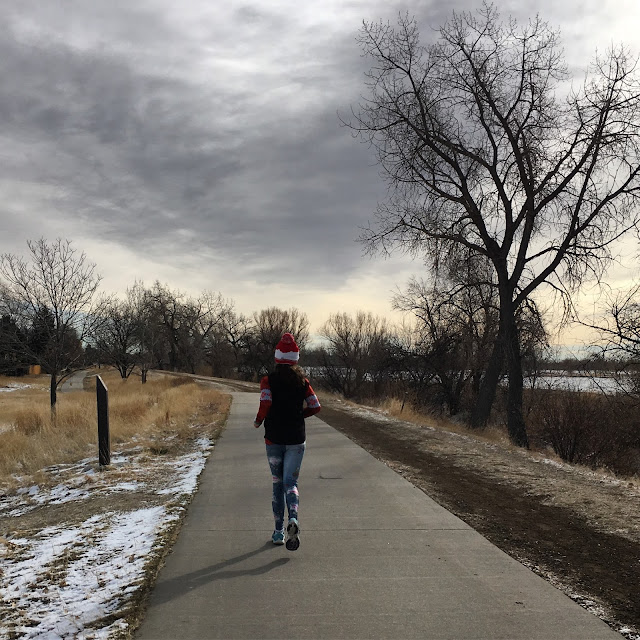 We stayed at Atlanta Bread for a while since we had to wait to tear down our aid station anyway. I had coffee and A had a cinnamon roll the size of her head. Picked up our aid station, went home to shower, dropped off stuff at Goodwill, stopped at Target to get cash and then picked up Lisa. We went back to Vine Street for our last stout month visit. Again, we didn't have to wait that long and the food and beer were both delicious. Dropped Lisa off, went to REI to exchange A's hiking boot that are NOT waterproof. Went to her Scout leader's house to finish up her bronze award and pick up cookies for the booth we were doing later. Thankfully, I was able to get them to allow us to set up inside because it was COLD. A had a pretty good night, selling over 60 boxes! Then we still had to go back and drop off everything. Urg. Late night.
Sunday (10,928 steps) - "Slept in" until 8. Made breakfast and then went over to the North Area Athletic Complex for the West Side Best Side Cross Country race. I was planning on volunteering and A was going to run. I was chosen to be a course marshal, which was fun. A was put on a team with three other speedy Roost ladies, and it was SO awesome watching them. A managed to run incredibly well and got a trail 5K PR (like 5 minutes at LEAST faster than when we ran last year). 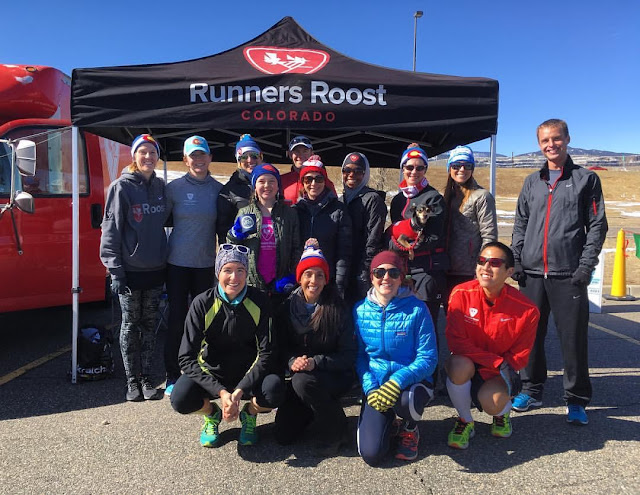 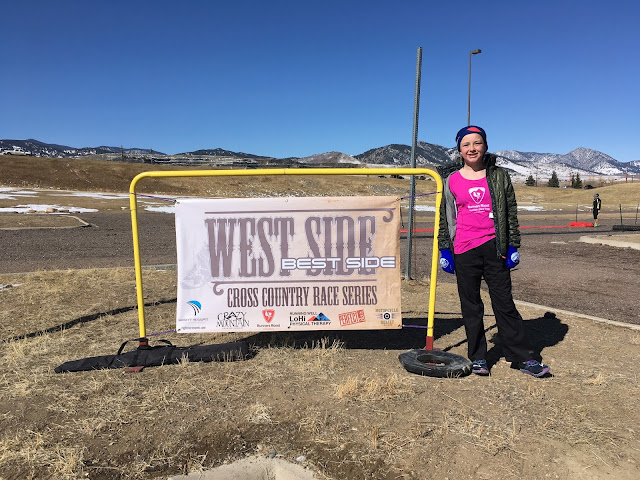 We hung out at the finish for a bit and then home for a few minutes before I had to go to the ERS ambassador meeting way up north. LOTS of food, beer, and cool new gear this year. Home by 3:30 for a short period before going up to our friend Heather's house for dinner. Stopped at Sprouts on the way home and we were in bed EARLY.
Monday (12,890 steps) - Slept like crap thanks to the Coldv2017.2. Runners Roost MUT team kickoff meeting, along with a planned group run. I probably could have gotten through it but I felt awful and A and I walked with Stacy instead. The meeting was pretty fun, got to meet a lot of new people. There are a bunch of bad ass athletes this year, just hearing about some of the "A" goals were pretty intimidating!
Stats: