Tuesday (11,371 steps) - Barre at lunch. Gymnastics after school. Cooked two dinners since we weren't going to be home at a reasonable hour for the rest of the week. In bed early again since I'm still dying of Coldv2017.2.
Wednesday (18,749 steps) - Run club AND the road/tri team kickoff, so there were a MILLION people at the store.
A decided to walk with Ang since she doesn't know the area and I ran with a Colfax, Alison, Sheila, Dave and Jeannene. 4 miles, which is a lot for me for a run club night. I was hoping that since I hadn't run since Saturday that my legs would feel nice and fresh. Sadly, no. Stayed a bit at the store to talk with people, but they had to get to their meeting and we were able to get out before 7:30.
Thursday (18,286 steps) - Barre with Gabi in the morning. Run club at Belmar. The weather, thankfully, was much warmer this week. A decided to walk with Mo and I ran with Jennifer and Colfax. The entire run just felt insanely hard. 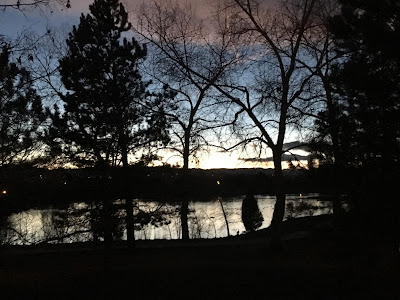 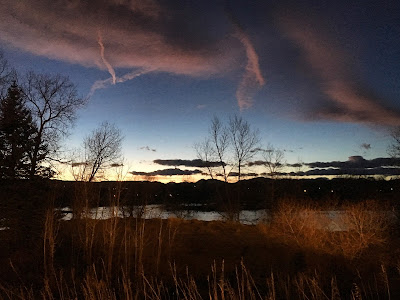 We again skipped going to Rocko's and stopped at the grocery store on the way home.
Friday (13,873 steps) - Hooray for a rest day! Cookie booth from 6-8 and it turns out... A HIT HER GOAL SO IT IS THE LAST ONE FOR THE YEAR!! Her goal was just to get to 750 boxes this year instead of the 1000 she got last year. Happy to have it all done and over with. Cookies are so time consuming and stressful!! Got our aid station stuff ready for the morning and in bed early.
Saturday (33,074 steps) - We had the mile 18 turn around aid station, which was nice because it was on our way to the start anyway. A wasn't wanting to run long and I had 12-14 on schedule. The forecast for the day was nearly 70 degrees, although when we were running it was fairly cold and windy. A and I ran 7 miles together and then I headed out for another 5 by myself. Finally was warm enough to take off my long sleeves around mile 9. Overall, not too bad until the last two miles or so, happy to have it done. 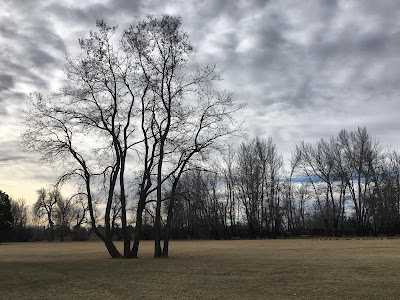 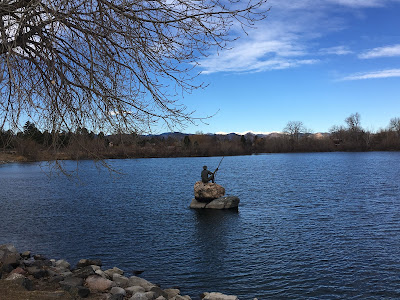 Since there was a Snooze near the start we headed over to see how long the wait was. Not "terrible" at 45 minutes. Saw Janet and Pete with a table and they invited us to join them, which was awesome! A went for the burrito challenge and I got some gingerbread french toast. 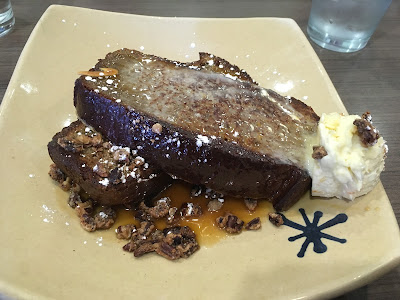 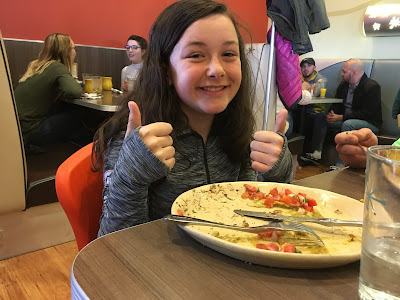 Picked up our aid station and then drove up to Boulder to deliver cookies to Jessie. FINALLY we got to go home and shower before heading over to Jessa's to spend the afternoon/evening with them for Eva's birthday. Too much pizza and apple pie!
Sunday (20,435 steps) - Lisa got to our house at 6:30 so we could go out for one last snowshoe adventure this season. We had heard that there was still a decent amount of snow in Nederland, so we drove to the Hessie trail head. That's actually misleading since the 4th of July road is closed for winter maintenance and we actually had to hike/snowshoe the 1.3 miles to the start. The road was super icy and virtually no "snow." We were hopeful that this would change when we got to the trail. It didn't. The snow was so packed down everywhere that we were really just ice hiking. You know what's really loud? Snowshoeing on solid ice. 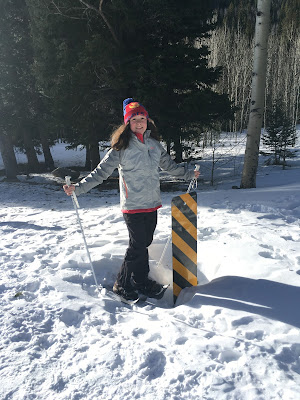 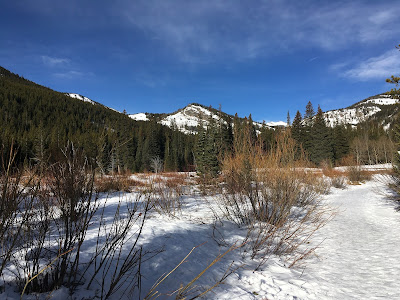 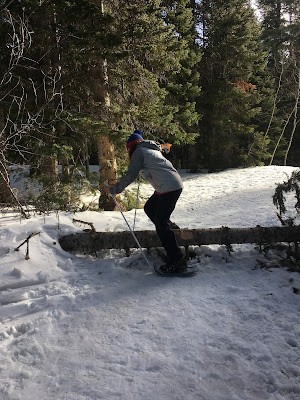 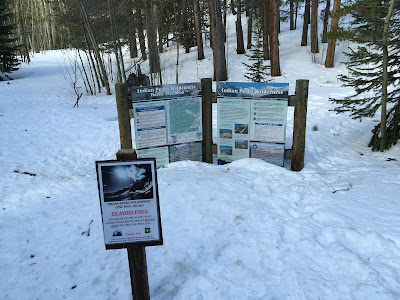 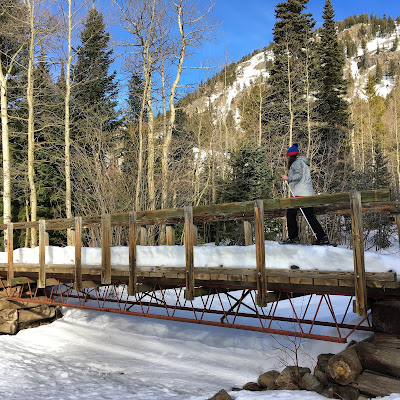 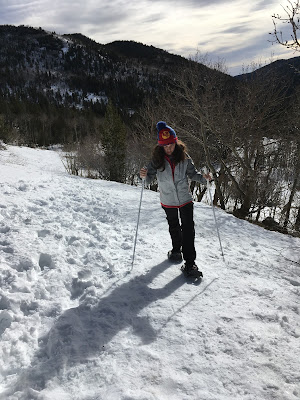 We took the trail up to Lost Lake, where we finally saw some other people. They were wearing hiking boots with Yak Trax, which would have been a smarter choice if any of us would have thought to actually look at trail conditions 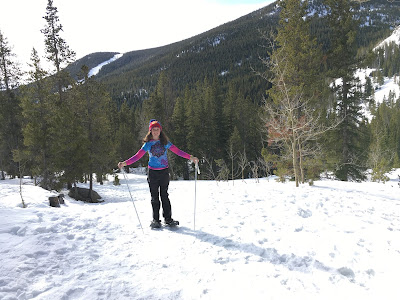 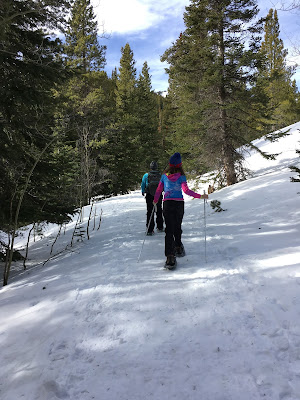 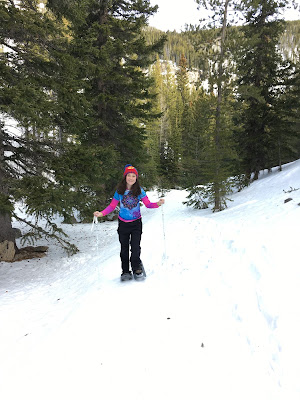 We had a snack/small lunch at the lake and then headed down.
We made great time on the way down, even with A taking off her snowshoes and walking down the last two miles. About 3 hours round trip for 5.5 miles of "snowshoeing." Stopped at the visitor center in Eldora to use the bathroom and then drove into Boulder to check out FATE Brewing. They had a brunch menu and kids got to eat free, so that was an unexpected surprise. A got a breakfast sandwich and I had the most gigantic burrito ever and a decent stout. 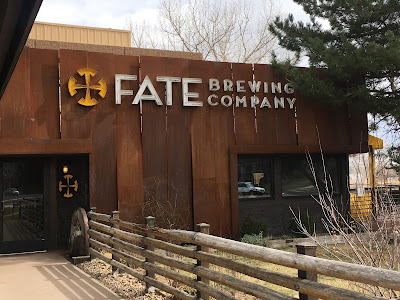 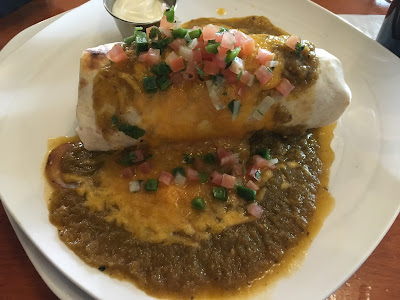 We FINALLY had an "afternoon of nothing," so we did just that. Threw in a load of laundry and napped in my chair. Cooked dinner and watched the Walking Dead.
Monday (14,635 steps) - Thankfully, a rest day. Having a weird "pain" on the side of my right calf, sort of between the shin and calf? And finally, a weekday of nothing to do! A had a soccer meeting right after school, but we had nothing in the evening. Stopped at the grocery store to pick up a few things. Made some Kung Pao pork and went to bed early. 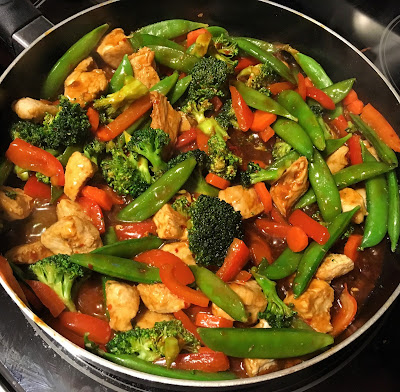