A week out from Across the Years and I again decided it was a great idea to run a 10K with Rocky Mountain Road Runners. A was finally back from Texas and Maureen was planning on walking the 5K. A decided she would rather walk with Maureen than run.

With the handicap start, I would be starting 2:50 after the gun. I had the same plan as last year when I ran - start slow, and hopefully not have a terrible time. I was coming off a high mileage weekend and had run a fairly hilly (and icy/snowy) 7 miles the day before with Runners Edge, so my expectations were not very high.

There was only only person starting at my same time:
I was taking it very easy and caught up to Ang (also walking) pretty early on. I started passing the "faster" walkers around .75 miles in and caught up to A and Maureen around .85 or .9 miles in (they were walking pretty quick!) and A got a few pictures of me from Maureen's phone. 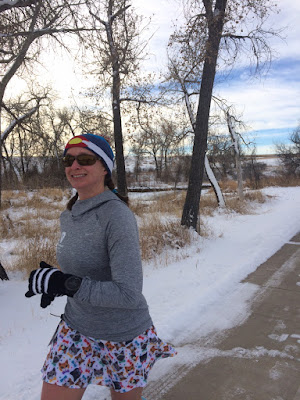 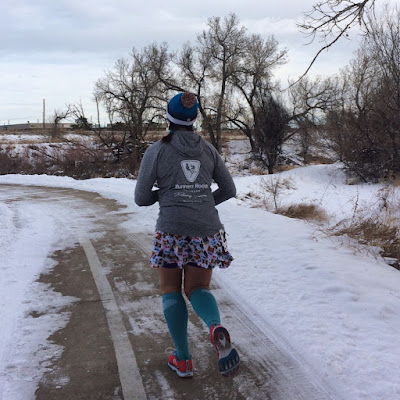 I was perfectly comfortable in my thin long sleeve top and skirt, the only part of me that was cold were my toes! They didn't warm up until probably 2 miles in. I was feeling pretty good on the outbound part of the course, but I remembered from last year that it was a gradual downhill on the way out. I took a very brief walk break after turning around at the only aid station - long enough only to take a drink of nice, cold, ice water. 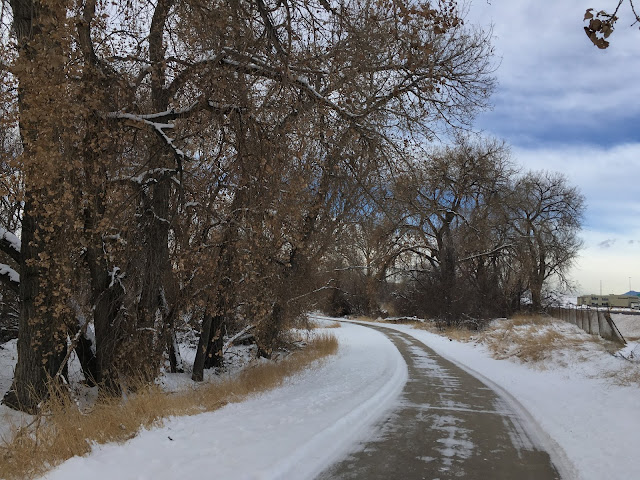 I continued with the plan to "push through" the tired legs, and it appeared to be working. I did start to have some pain in my right ankle (STILL!) even though I had taped it before the run, but I didn't notice my gait being off and figured I would run through it if I could. I was finally starting to get passed by runners, although I'm pretty happy it didn't happen until the second half of my race! 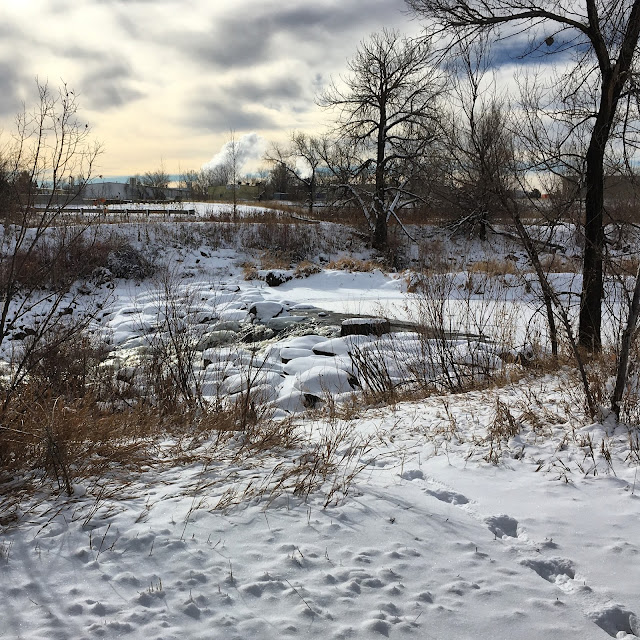 Remembering how much I struggled once I hit mile 5, I held back a bit and took it super easy on the small underpass hills. Rob passed me around mile 5.5 and his enthusiasm helped me get through my desire to walk. FINALLY, I could see the loop around to the finish. I passed Ang shortly before the bridge and then did my best to hang until I was through the shoot.

Didn't see A and Maureen at the finish, I assumed that was because they were taking Colfax for a walk. Got some pictures with teammates, stuck around for awards (none for me this time!) and then went to Torchy's with A and Maureen. A very fun morning, and INCREDIBLY pleased that I made it through the entire run without a walk break (outside of the aid station).