I had NO business running a 10k so soon after Across the Years. But Saturday night I was up late... on Facebook... and saw that Maureen was attending. I looked at the website and it was $10 for race day registration at the first RMRR Trophy Series race of the season.

The race was scheduled to start at 9, and after some quick messaging with Maureen she said it was easy to find, registration was quick and I should come. (They also had a 5k option that I was considering).

So I got up just before 8 and drove to the start, only about 15 minutes away. There was a decent number of people there. When I went to register Maureen convinced me to sign up for the whole year since it was only $35 (and I can do a family add on for A of only $10)! So I got my bib and then sat in the car for a few minutes until the race started.

The series does some sort of handicap that I don't really understand, other than trying to remember my days of league bowling. Anyway. I guessed (optimistically) that I would run around 13 minute miles. That meant that I would be starting in the first wave (with the race walkers).
The course is an out and back, and I planned on going SUPER slow. I started jogging. Felt ok. Kept going... and going... (saw my buddy Ross at the 5k turnaround, but not sure he recognized me) and going... and going...

I had not run this path before, although it is a branch of the Clear Creek trail I have run in other places. We had the creek on one side and then some industrial areas on the other. But, it was pretty. It was a nice cool day, but I started to heat up around the half way point. The miles ticked by, and by the turn around I still had not taken a break. 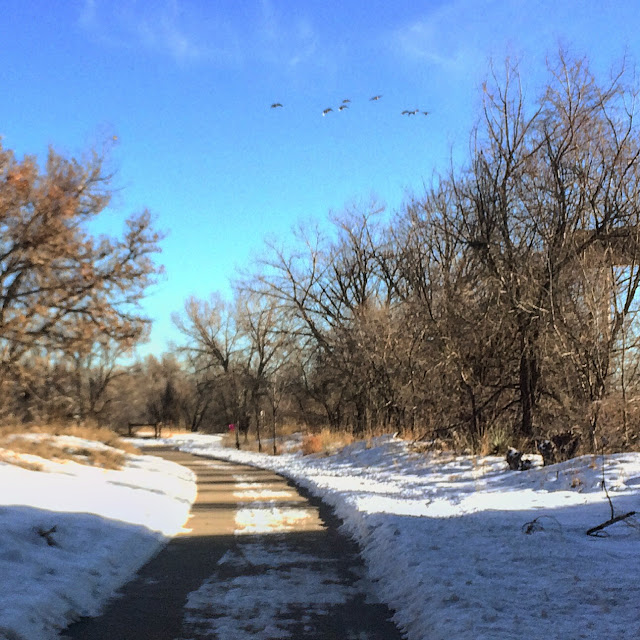 I stopped briefly at the water stop and then kept going. I felt really good until about mile 4. Mile 4-5 I slowed down a bit and it felt harder. Maureen passed me somewhere after mile 5. In fact, quite a few people passed me then. I finally had to take a walk break only about a half mile before the finish. I swear the whole way back was uphill. My legs finally had enough!