Tuesday (12,303 steps) - With the new January barre challenge, I headed to barre at 6 am since Laura is on vacation this week. My ankles were bothering me a bit so I wasn't able to stay on my toes as much as usual. I worked a billion hours as a result of being at the office by 7:45. After work I met up with Lisa at REI so that we could attend the Snowshoe Basics clinic. It was actually really informative and we are both pumped for our first time out, which we hope will be in a week! After the clinic was over Lisa shopped for showshoes for a bit and then we met up at Amato's for beers and some food. Time somehow got away from us and it was after 10 before we left. Goodness!
Wednesday (16,269 steps) - Barre at 7:15 with Nicole. I haven't taken a class from her in a long time and I was surprised with how challenging it felt! I had to drop out of quite a few moves, which was really frustrating. Blame it on my long run this weekend and barre classes three days in a row? It started snowing pretty early on in the day, and as the day went on it got worse and worse... By 4:45, Troy made the executive decision that we were having a snow day. YAY! I went down to the gym to change into my running clothes, hoping to go to run club. Turns out, traffic/road conditions did not agree with me. Ended up bailing and went home - it took me an hour and forty minutes! Although, I will say, when I don't need to pick up A, I don't get nearly so stressed out in traffic. Walked for an hour on the treadmill and watched Bates Motel.
Thursday (19,085 steps) - SNOW DAY! I did, however, still have to get up early to go to my 8 am dentist appointment. It's only a few miles from my house, but it took me 45 minutes to drive there. Went home, canceled my lunch barre class and walked on the treadmill and watched Bates Motel. Went to the 4:15 barre class and then headed over to Belmar for a super cold run club. 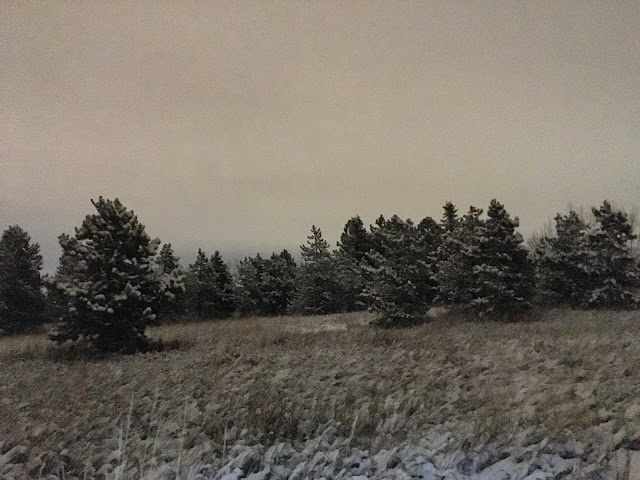 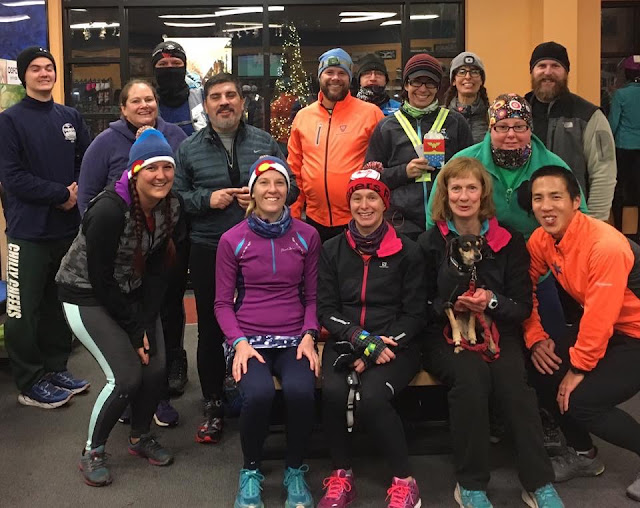 I walked with Mo and Colfax, and went to Rocko's after for a beer and nachos.
Friday (10,627 steps) - Bah humbug to going back to work. The day went by pretty quick, with a catered lunch from Maggiano's for the receptionist's retirement party. I actually was "fullish" after that, which is hard to do. And I don't even really feel like I overate! After work I headed over to Heather's house for an "adult game night." I hadn't felt in the mood for it, but once I was there it was a blast. We had party food (chips, cheese, dip) and played Cards Against Humanity. 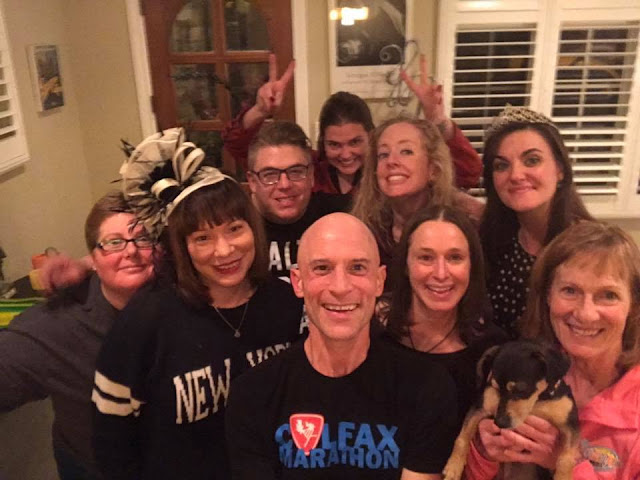 I didn't get out of there until 10 pm! Stayed up another hour and watched more Bates Motel.
Saturday (26,654 steps) - Up early to drive to Runners Roost in Aurora for a the last run of the winter training session with Runners Edge. 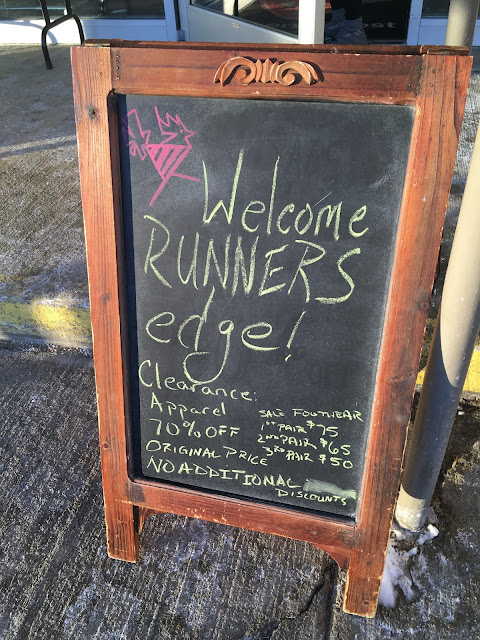 The course was a big loop in hilly Parker, and the course was super snowy/icy. I opted to just do the big 7 mile loop. Legs felt ok, other than there being a lot of climbing. 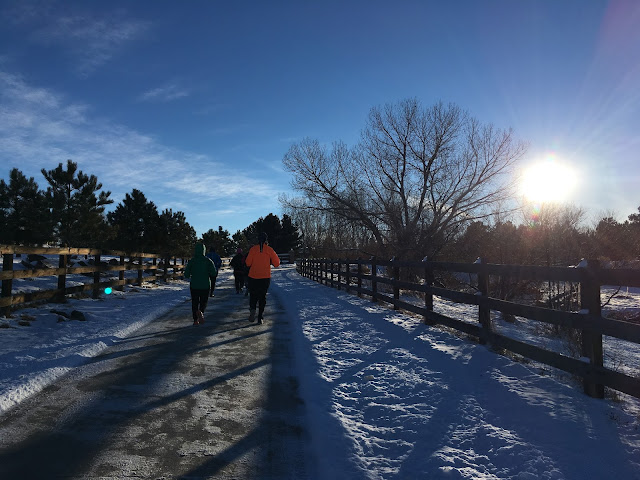 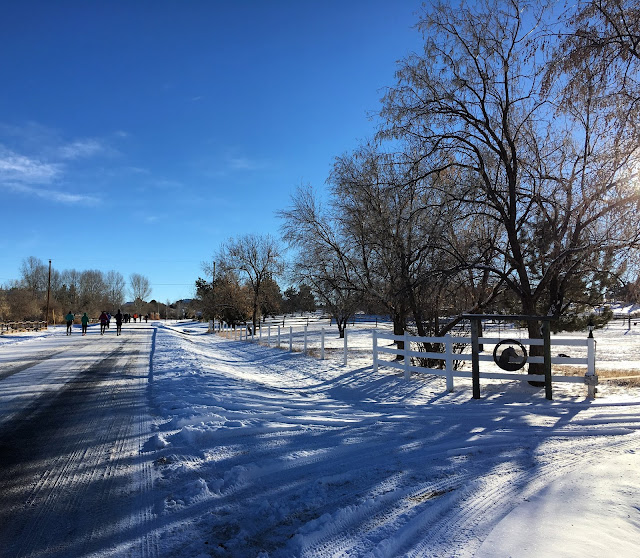 Stayed and had pancakes from Flippin' Flapjacks, chatting with Pete, Alison, Kristin and of course, David. Went home to have lunch, then had to go to the grocery store. Threw some chili in the crock pot and went to pick up A from the airport - quickest trip EVER. From the time I parked to the time I was on the train to the gate? TWELVE MINUTES. I arrived super early, but her plane did land on time and the kids were the first ones off. 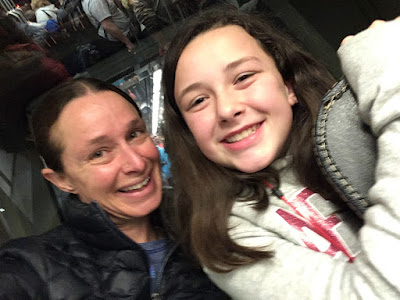 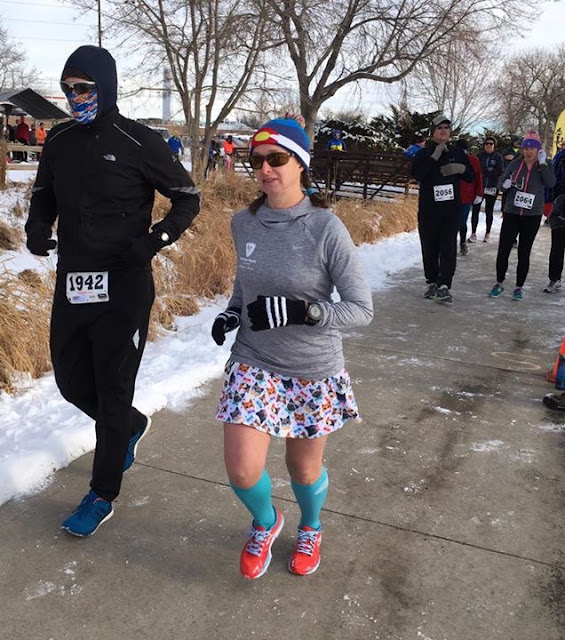 After breakfast with Maureen, we went home to shower before Stacy came over to help make the medals for the Freeze Your Cookies off races. It was a lot of fun, but REALLY messy. 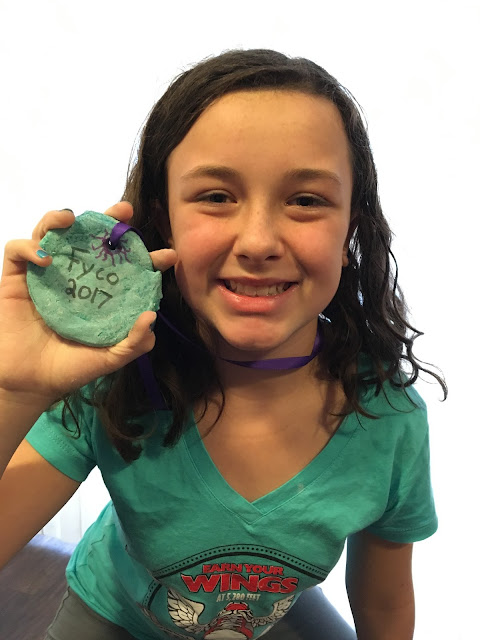 Finished with just enough time to get to 4:15 barre class. I was STARVING by the time I got home from class - dinner, more laundry and in bed even EARLIER.
Monday (15,718 steps) - CRAZY windy this morning. The wind woke me up at 3:41 (yes, I looked). Since I was awake, I used the bathroom and had yet another bloody nose. Couldn't really fall back asleep, but I had a barre class at 6 anyway. Picked A up at Scouts, went to the grocery store, made dinner, did laundry. In bed early, we were both exhausted.