Across the Years (Race Recap)

In a moment of insanity (and ok, thriftiness) I booked my outbound flight on Frontier. With all the drama over Christmas about people having missed and incredibly delayed flights, I was really stressed out. I was also a bit panicky about the baggage rules. I studied the "personal item" information pretty carefully and decided that I could totally pack everything I needed into that so I wouldn't have to pay for a carry-on. See? 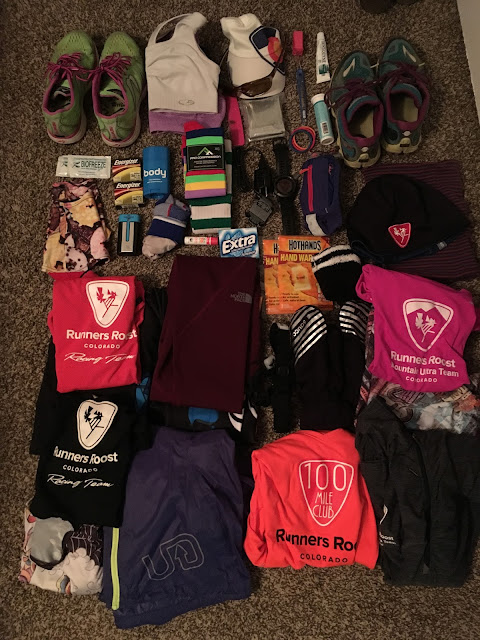 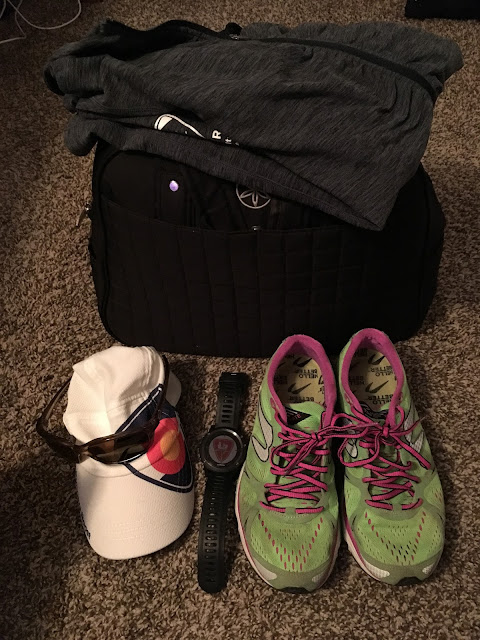 Went to work in the morning. Headed out to the airport around lunch time. The lines at security were not very long and I was at the gate in plenty of time. I was incredibly amazed that the plane was there on time, we boarded on-time and we departed on time. However, it's been a LONG time since I flew Frontier. The seats are completely different. No more TV's on the back. No cushioning and the tiniest "tray tables" ever. I'm a tiny person and I hated this. It was so uncomfortable. However, I only paid $18.10 for the flight, and at least it was short, so there's that. Arrived a few minutes early and took the shuttle to pick up my rental car. Like last year I had to keep checking for a reasonable rate. Knowing I'm only driving about 50 miles total, I hate paying a ton for it, but know I need the heater for nighttime. Not as inexpensive as last year, but booked a piece of crap car (Chevy Spark) for the whole weekend for $83. Again, like last year, I stopped at In-n-Out for dinner, then headed to the local Wal-Mart for dessert (cheesecake) and beer. Arrived at the race and got my tent assignment. It seemed warmer than last year, which was nice. However, unlike last year I didn't have a sleeping bag/pillow. I did have a space blanket, but that didn't seem enough for me to actually fall asleep. So... Groundhog Day, try to sleep in the tiniest/most uncomfortable vehicle ever. Sigh. 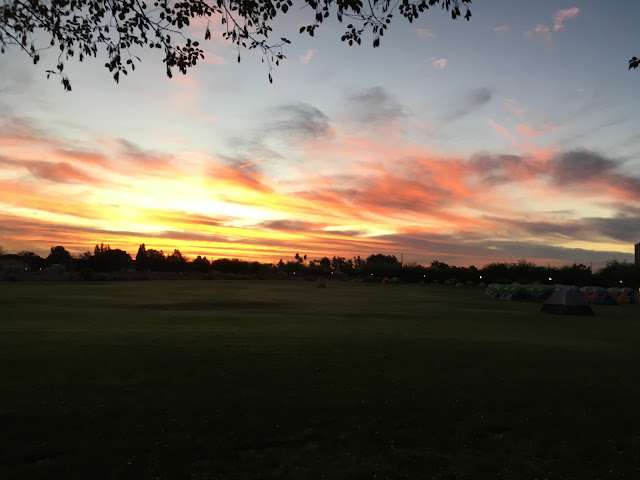 Got about 12 minutes of sleep. (Well, maybe an hour here and there, but nothing to brag about). The race was scheduled to start at 9:00. I went to the food tent and got some french toast, part of a quesadilla and coffee. As I was getting dressed, I noticed I already had a small blood blister on one of my toes. Yippee! Went to the medical tent to see if there was anything I could/should do with it, and it was recommended that I leave it alone. Ok then. Picked up my bib, and it's time to go... 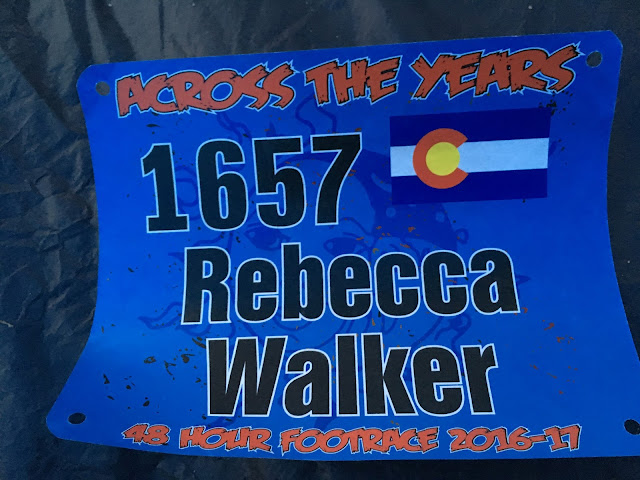 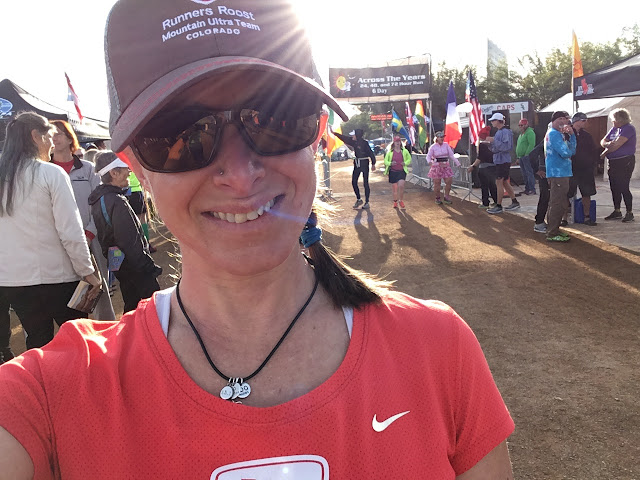 We started out running clockwise. Having run the race before, I had no plans of "racing." I took a walk break at least once every loop, hoping to save my legs. Within a few hours, I was already feeling pretty terrible. Back in the beginning of November, I rolled my right ankle and it was screaming at me. I also felt that I was developing blisters on my right pinkie toe and possibly my right heel. So basically, my whole right side was... wrong. I recognized many of the same people from last year, which was fun. 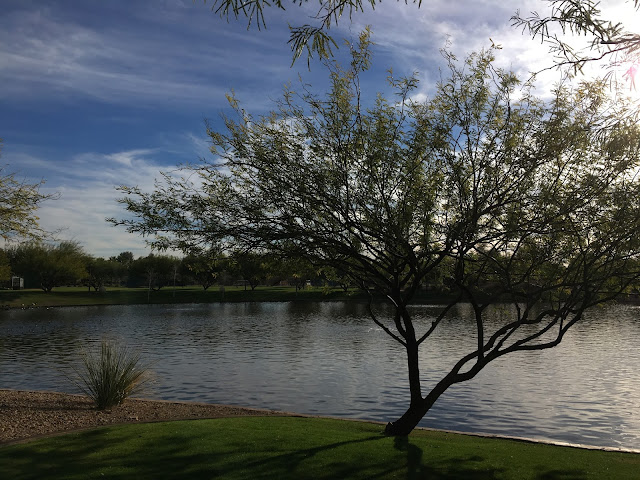 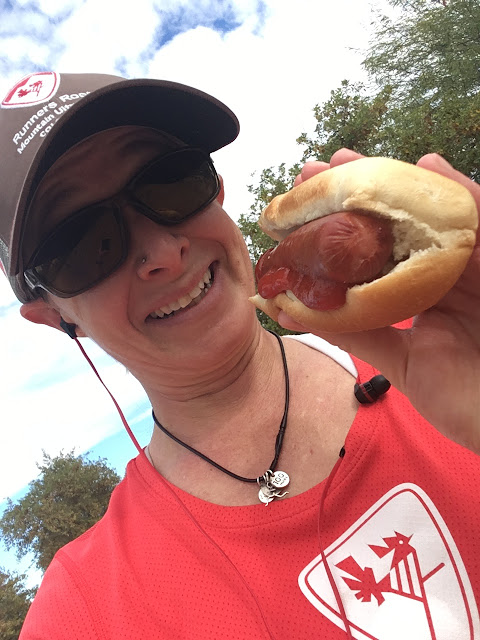 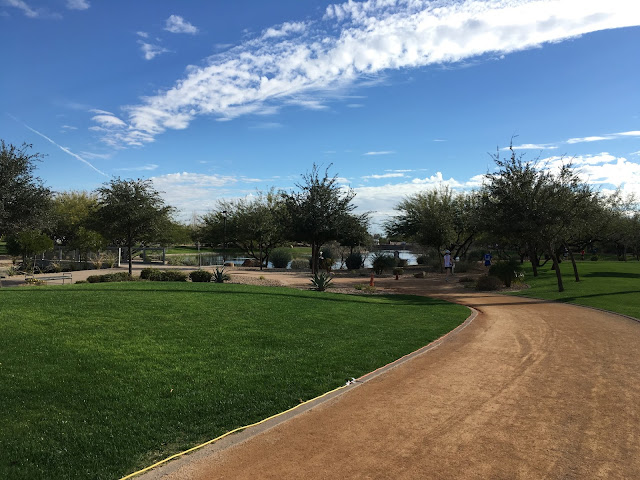 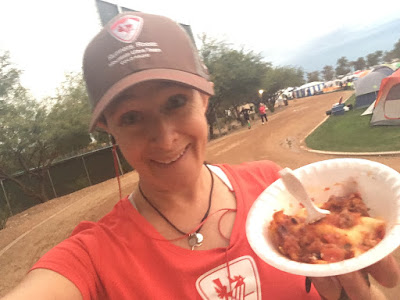 What's not really fun? Running around in circles... I know, I know, what was I thinking? Anyway, I was feeling pretty terrible very early on, which doesn't bode well for a very long day. I was super disgruntled to not hit my 50 miles in 12 hours. I was not happy when it started to rain. I was also INCREDIBLY upset when I went to change into my warmer clothes for night and discover that my tent was flooded!! The rain flap wasn't attached on one side and pretty much everything got soaked. DAMN IT!! I had to gather up all my stuff and bring it to the car. I sat in the car for a bit (I think I was at mile 46) to get dry and to try to nap. DID NOT WORK.

Didn't even pretend to try to get any real sleep. Any time I went to the car I would set my alarm for about a half hour. If I was still awake after 10-15 minutes I went back out. It was so muddy from the earlier rain, and my feet were really screaming at me now. I did not do much running. I know in an event like this that even walking and continuing to keep moving makes a huge difference. I really had a pretty terrible night. Unlike last year, however, I didn't have any issues actually being cold when I was out. In fact, one of the only things I brought with me that I never used were my gloves! 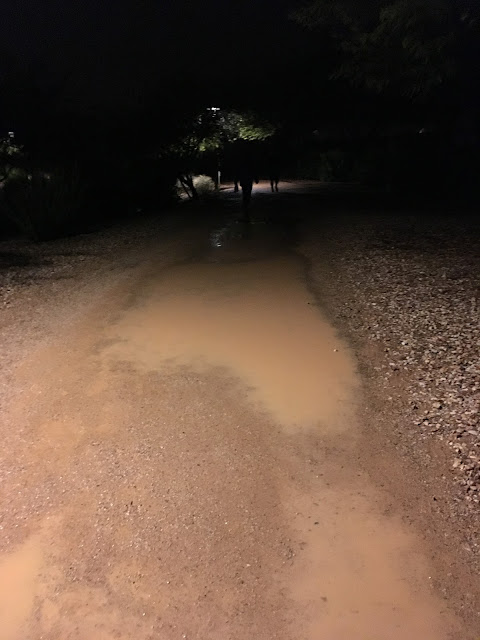 By the time the sun came up I was so blah. I decided to start my day off with one of my beers and some pumpkin pie. I walked a LOT. The most interesting part of the day was watching the course get squeegeed!
That helped a lot, and the course did dry out quite a bit. By late afternoon I was at about 83 miles. However, I was moving SO DAMN SLOW. I couldn't even believe how long it was taking me at this point.
There was more rain in the forecast, so I went to the car to change clothes again and hoped for a quick nap before heading out for my second night. The biggest catastrophe of the day was when I headed back out. I got to the timing mat on the opposite side of the course and didn't beep. I looked down and realized I didn't have my chip on. OH NO. A few other runners convinced me it was fine and if I just talked to the timing people they would give me credit for the lap. Got back to the start and they said that was fine. I went back to the car to get my chip and COULD NOT FIND IT. I looked for about 15 minutes - throwing things around - remember, everything I have is now in the car because of the flooded tent. In hysterics, I go to the timing tent and tell them I lost the chip. They get me another one to use and warn me I'll have to pay $75 for the other one if I can't find it. I head back out and I'm looking everywhere... there is only a small section of the course where it COULD be, because I had done only half a loop before realizing it was gone. NOTHING. It was getting dark, so I figured now that I have calmed down a bit that I will go look one more time in the car. I mean really, where could it have gone??? Then I see it. I had put it around the emergency brake, for safe-keeping. Son of a... I turn that timing chip back in and off I go. Geez.
Hooray for pizza!!!! Another few hours and my feet are just pissed. I decide to go for my spare pair in hopes that I feel a little better. Just before 8 pm and I'm finally at mile 90. And then the longest night ever. Because of all the mud and my aching feet, I was barely moving at a 20 minute mile pace. Around 9 and the rain started again. Man, I can't catch a break!! Ugh. Lots of complaining and resting and just suffering to get it done. Right around midnight I headed out for my "last" loop. My "A" goal had been to beat last year, with 116+ miles. I was perfectly ok with stopping at just over 100 miles.

As soon as I finished I sat in the warming tent and chatted with some runners, and apparently, I was also just in time to spectate the "underwear beer mile." LOL. And most of these people had been out running for at LEAST 15 hours at this point. Crazy. Around 1:30 I went to the car to "sleep." 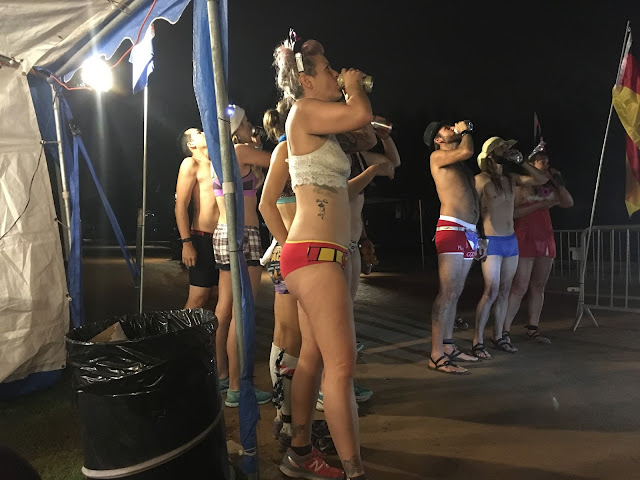 It POURED all night. I was really happy I stopped when I did, because before I even got situated the rain had started. I dozed on and off until maybe 7:30. I decided to go out and do a lap or two since I had time. I was running pretty good the first loop, stopping to take a picture of how badly the course had flooded during the night. 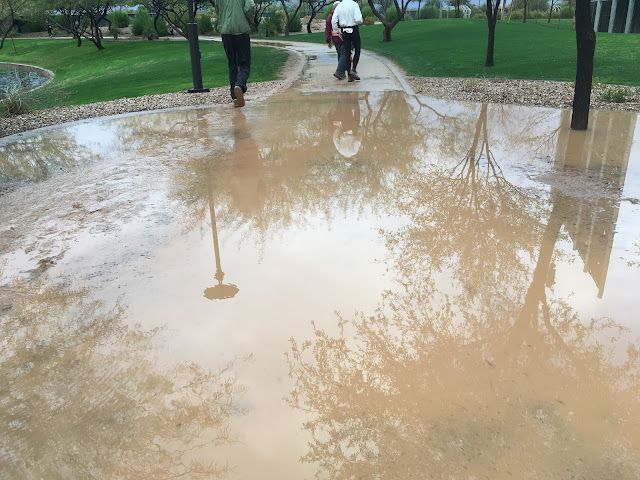 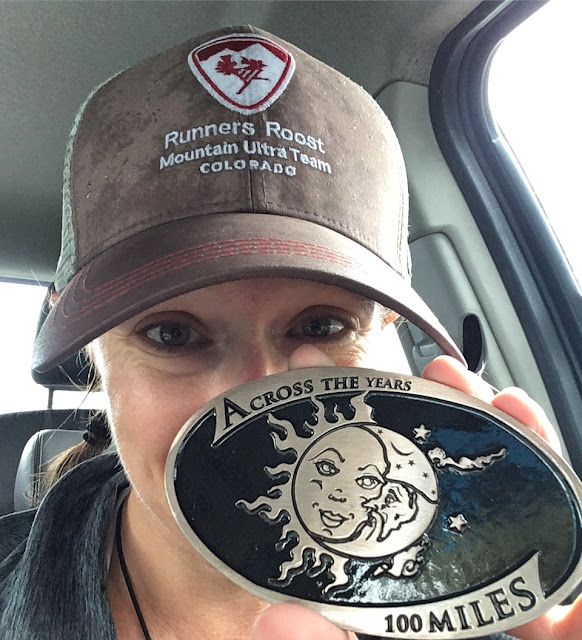 I did not stop/pause my watch at all while I was running, until I was finished. The incredibly long split times are when I was in the car trying to rest. I do not have any data from  the last two loops I did in the morning, I had forgotten to put my watch back on.

Stopped at In-n-Out on my way to the airport, dropped off the car, and went to the gate. Plane was on time and landed in Denver on time as well. All in all, the travel aspect was uneventful. 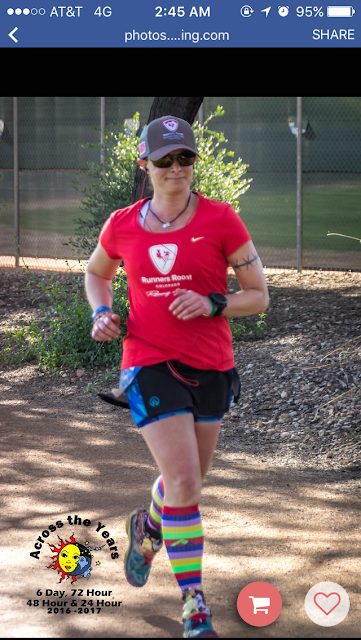