Tuesday (21,551 steps) - With A gone, I plan on sleeping "late" and doing my running in the evenings on the trails. Traffic was a nightmare getting out of downtown, and I had plans on doing the loop at North Table, which is about 7 miles. I hadn't been there since I almost stepped on a rattlesnake. I pretty much didn't run at all last summer, remember? Anyway, the loop, on average, took around 1:40-1:45. I expected to be a tad slower with my tired legs and stupid hip. By the time I got close, it was almost 6:15 and the sky was looking suspicious. I kept checking my phone. Windy, but no forecast of rain or a storm. Hrm. So I headed out. I got about a mile up and a few tiny raindrops started to come down. Mesa Top from North Table Loop was open (it never had been a few years ago), so I figured I would take the "short cut" and hopefully avoid whatever storm was coming. It was a bit disconcerting when the thunder started when I was on top of the mesa. I headed back down Cottonwood Canyon. A LOT more mountain bikers today, and it was (as always) frustrating to jump off the trail. 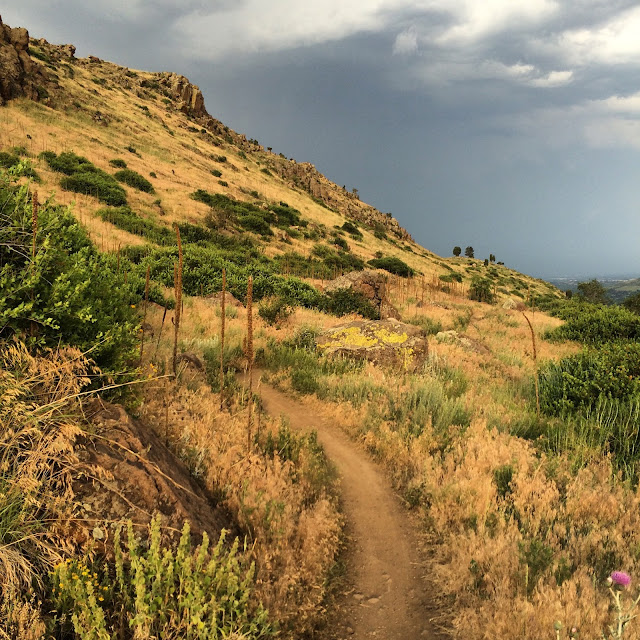 Anyway, managed to make it back down without getting struck by lightning. Yay! (And smart choice to do the shorter loop, it would have been dark by the time I finished the big loop). Shower, dinner, reading and two episodes of "The Vanishing Women." Boy, I really live it up when A is gone!
Wednesday (18,282 steps) - Went to work an hour early so that I could go to my very first barre class during lunch! For some reason, I thought the studio was closer than it actually was (if you are a long time reader, you know that judging distances and time to travel between the two is a serious problem I have have). I thought I would have time to walk over there, take the class, and be back in under two hours. Turns out, the Barre Forte LoHi studio is almost 2 miles from my office, so I had to drive over. I did manage to find free street parking just a few blocks over. I was the first to arrive for the 12:00 class, and spoke with one of the owners and the instructor before class began. 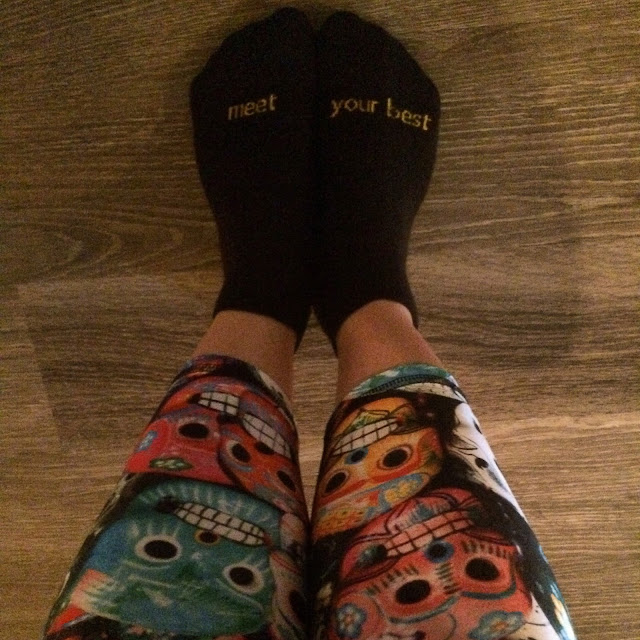 I guess, in my head, I imagined it would be similar to the Fitness Blender barre videos I have done in the past. It was NOT like that at all. It is incredibly fast-paced, and is a total body workout. Within minutes, I had sweat dripping down my back. Within 15 minutes I was shaking during so badly during some of the moves that I thought I might collapse. But man. I ABSOLUTELY LOVED IT. After class the instructor told me she didn't believe me when I said I'd never taken a barre class before. She probably says that to everyone, but I loved hearing it. So I was a sweaty disgusting mess when I got back to work, but I felt great. Stayed a few minutes late to make up for my long lunch, then headed down to a special run club at the Roost. 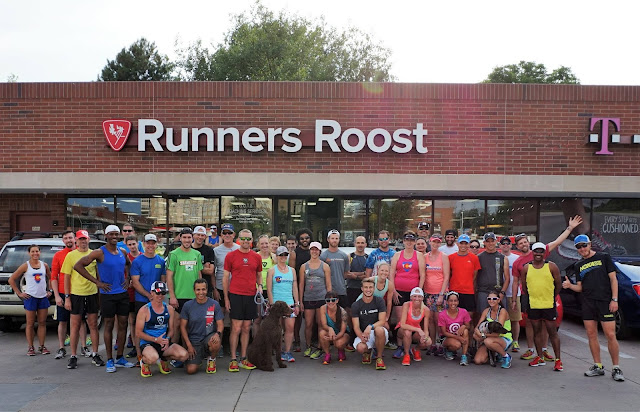 The run really sucked. I have been running 3ish miles pretty regularly at run club. Between the fatigue from barre and my stupid hip being weird, I barely got in 2 miles, with quite a bit of that walking. Other than that, it was a super fun evening with Maureen listening to ultra runner/Leadman Travis Macy speak. Stretched when I got home and watched another episode of "The Vanishing Women."
Thursday (22,338 steps) - Failed at sleeping in. Pretty tired at work all day. After work I headed over to Lair O' the Bear for a special weekday "Happy Trails" run club. Thankfully, the temperatures dropped a bit, it wasn't nearly as hot in the hills. Decided not to demo shoes since my hip is still being stupid. After a pretty full week, and Wednesday's Terrible Run, Maureen and I decided to run 3-4. 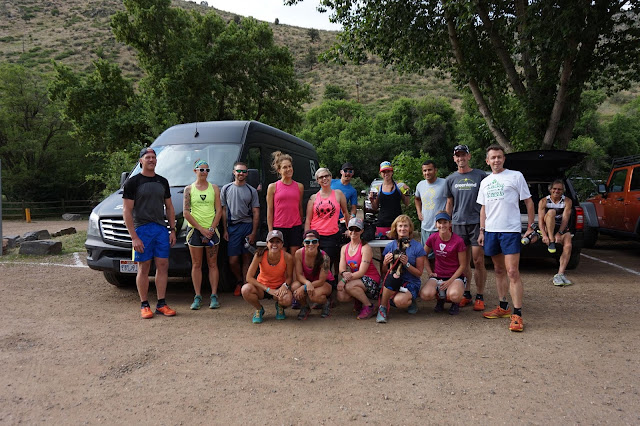 We ran with a new friend, Francesca, and the run was pretty great. We took it slow and easy, lots of chatting. 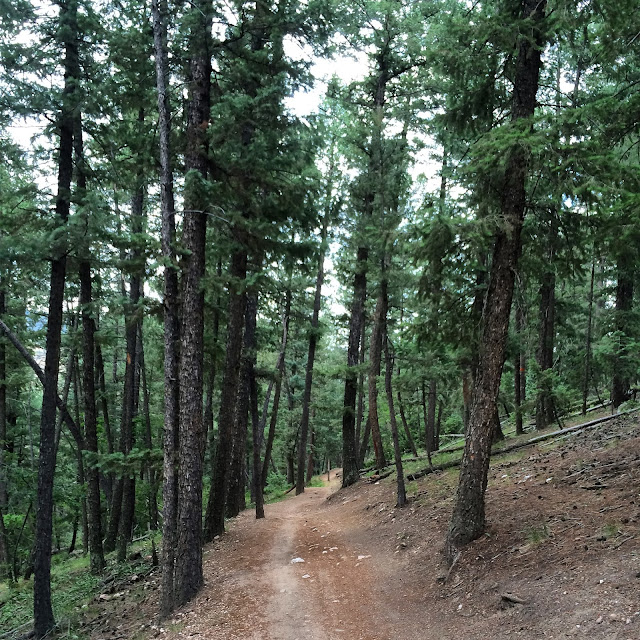 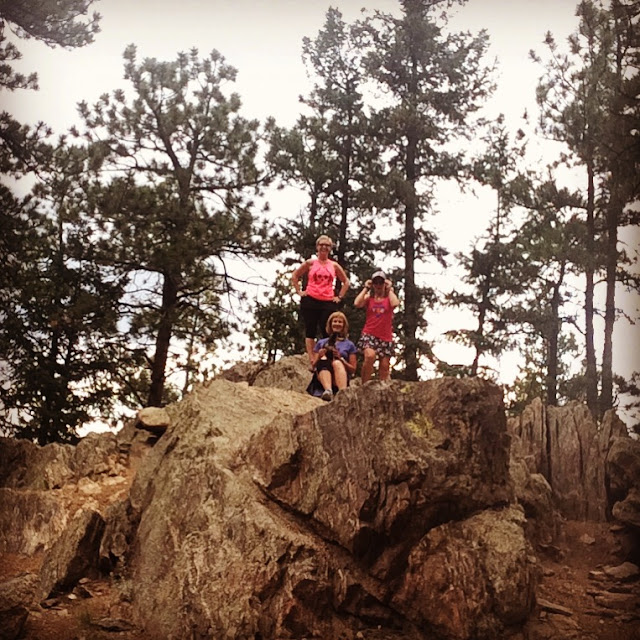 When the run was over we gathered at a picnic table for BBQ and a beer. It started to rain a bit and I desperately needed to run to the store, so I left early.
Friday (17,491 steps) - Rest day? Nope! I was still feeling pretty good (as in not sore) after Wednesday's barre class, so I went to the 7:15 class, giving me a chance to go before work. It was much easier to find parking, but I didn't enjoy the instructor quite as much. As soon as I got to work, I noticed an email that the office was closing 2 hours early! Yay! Only I ended up staying later to get work done. Stopped and got my hair cut on the way home, watched some TV, picked up some Pho (only my order was wrong), bed later than planned. A called me for the first time since she left and we talked for a while. Miss her!
Saturday (22,540 steps) - Runners Edge was right down the street (literally, like 5 minutes away), so I decided to go short and slow. It was drizzling when I left, and thankfully, continued to lightly rain all morning. Ran with the slowest pace group for four (really enjoyable) miles. 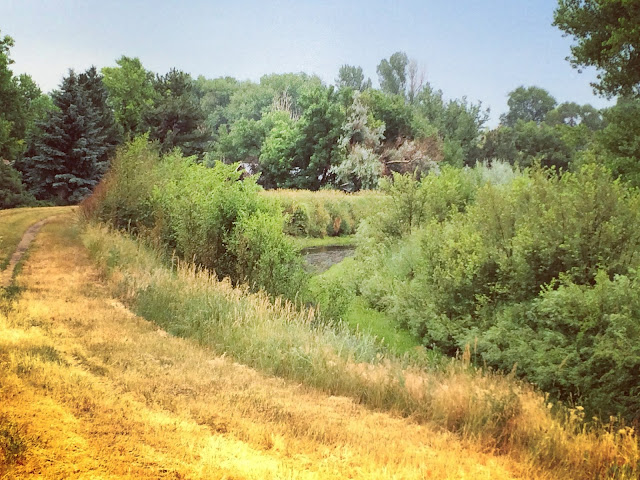 I remembered the pace leader as the one that Hope and I ran with a few years ago. Stuck around for coffee and a sandwich before heading home to finish packing and watch an episode of Contagion. Left around 10 to go to Declaration Brewing for the first of the beer runs! Met up with Maureen pretty easily, got our stuff, and then met up with Johnny, who decided to "run" with us. I was trying to still take it easy, but had incredibly heavy legs. Hip did seem ok. We stayed on the patio for HOURS, sharing beer and conversation. A truly great time! 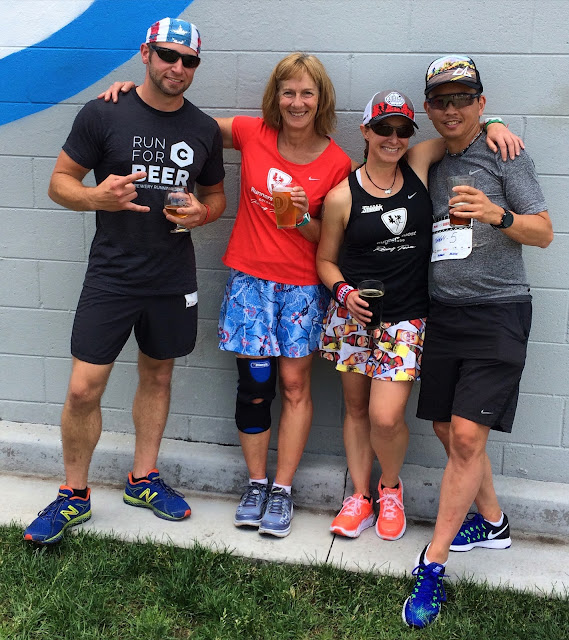 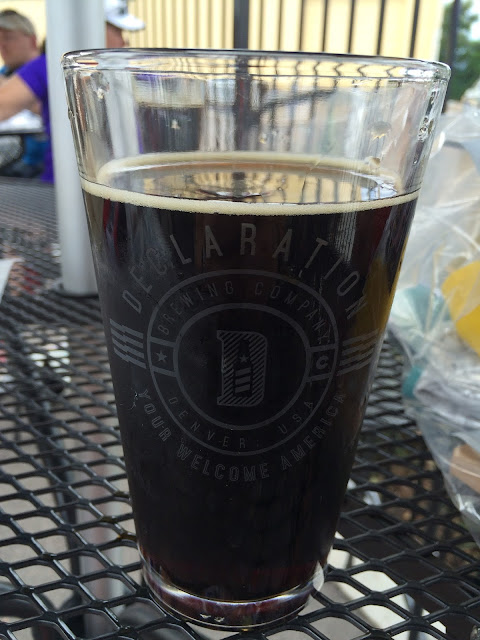 Had to wait a bit before I could head out, so around 5 was when I finally headed down to Raton. Got hungry a shortly after passing through Pueblo, and realized I was in the middle of nowhere with very limited food options. It was raining pretty heavily and the "best" choice for a quick dinner was Carl's Junior. Ate in the car, got to my hotel in Raton around 8. Door lock was broken, but it was the "last room" (I always find it funny that no matter what time I check in, it's always "the last room.") 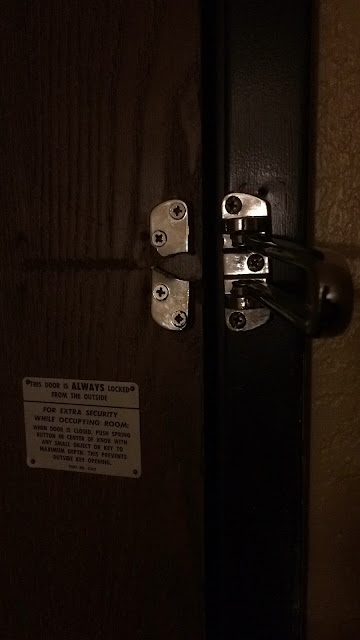 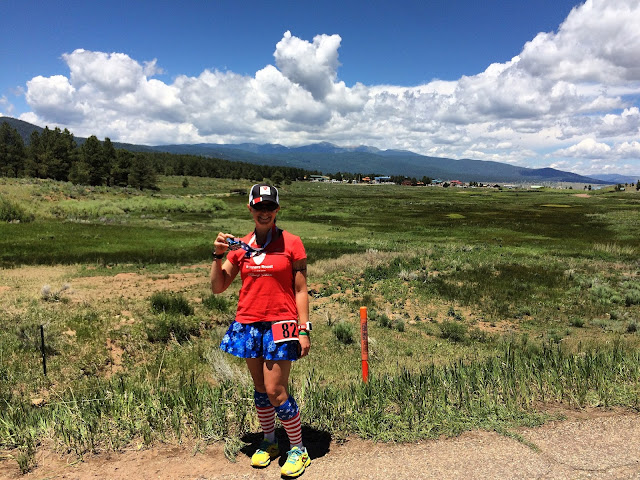 On the way out of town, I stopped at the Enchanted Circle brewery. Got a pork sandwich, fries, and a delicious beer. Service was kinda slow, and I was sitting on the patio when it started raining pretty heavily. Food and beer was good, although it took a long time to check out and be on my way. The drive back was fairly uneventful except for the 75 minutes of POURING RAIN that I drove through once I crossed into Colorado. Every time I drive to New Mexico. EVERY TIME. Stopped at Target on my way home, watched some TV, in bed later than I hoped. My hip was INCREDIBLY sore and achy. I warned Maureen that we may not be able to hike as far as we planned.
Monday (31,817 steps) - I woke up way before my alarm. I could barely get out of bed because my hip was hurting so badly. I was glad that I had picked up some Epsom salt and took a hot bath. I don't know, it might have helped. Left the house at 7 to meet Maureen at the Woolly Mammoth lot at 7:30 so we could carpool to Evergreen. We were parked and on the trail by 8. Looking up my old Garmin information, I thought that hiking to the summit of Bergen Peak was about 9 miles. I hadn't been out to Bergen in two years, so my memory was foggy of where everything was. My hip was feeling all right and Colfax was keeping up. We were maintaining an easy pace and having a great time. We decided to go all the way to the summit, and I was a bit surprised that both our watches read 5 miles. 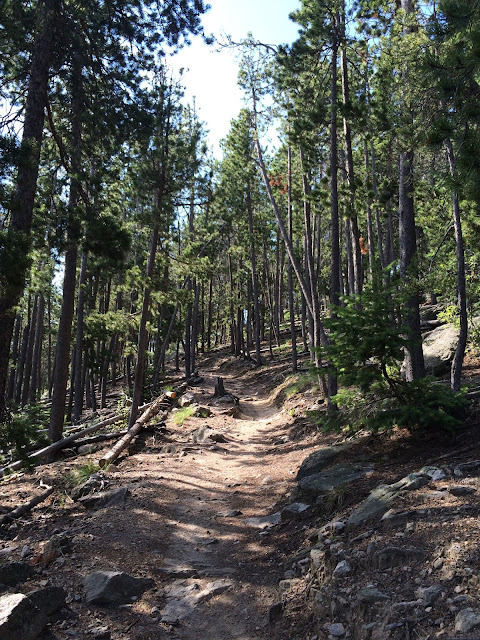 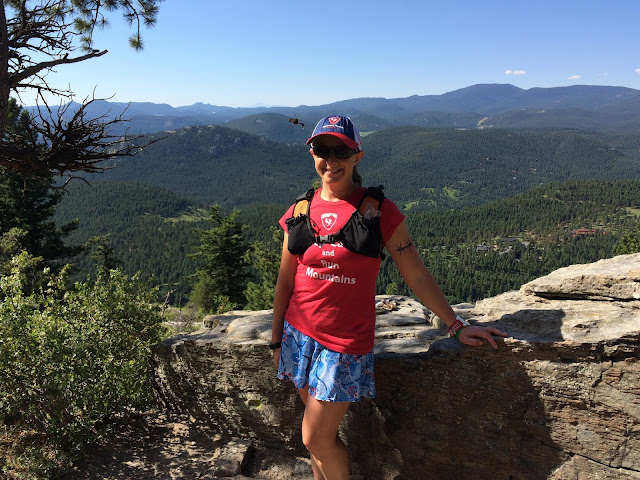 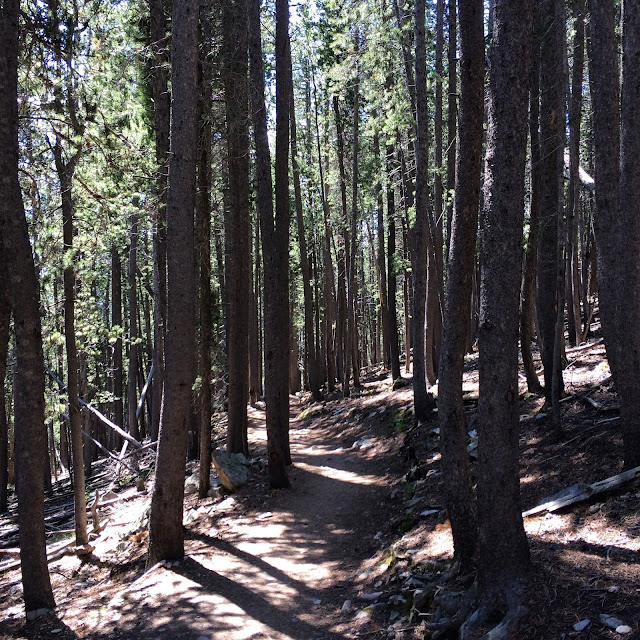 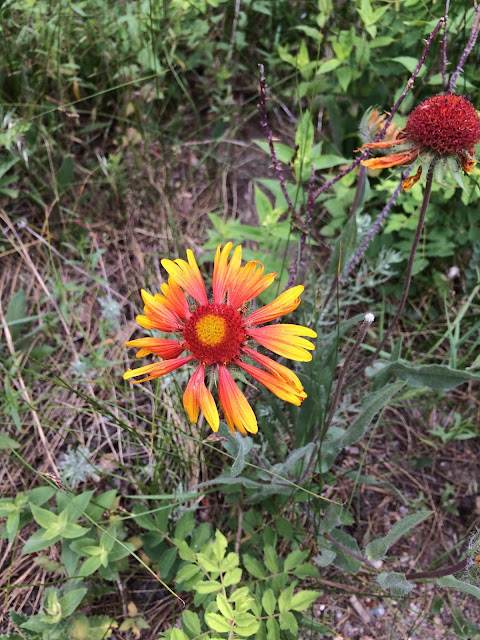 Ah. The way down was a bit more taxing on my hip and I could feel my gait getting wonky. But the movement DID make my body feel better. We stopped in town on the way down to grab a beer and share some chips and salsa.

I drove into Uptown to meet up with Heather for "real" lunch at Steuben's. I had a fantastic green chili burger and a beer. I hadn't seen her in a week (that's a long time!) and it was great to catch up before she leaves for Hawaii for two weeks.

Went home for a quick shower, iced the hip, watched an episode of Contagion. Drove over to Jessie's house for her annual Fourth of July party. More BBQ (I really didn't eat that much, but there was a to-die-for pineapple upside-down cake that I had two slices of). Headed home when the city's fireworks started. Another long day and I was exhausted. Iced the hip again, watched one more episode of Contagion (I really like this show!)