Tuesday (16,376 steps) - Mildly hungover and exhausted from the weekend. Hip felt like crap so I scheduled an appointment at Accelerate Health. The doctor I have seen in the past wasn't available, but I was able to get in to see someone else at lunch. I explained all my issues and she seemed to think it wasn't a tear or anything serious. She asked what my running plans were for the week and I told her I was taking the week off. She suggested I keep running??! Uh. I just told you it hurts and I'm limping even when I'm walking... I did not agree with her diagnosis. I did, however, agree that I should be using heat therapy as well. Making an appointment to see someone else if it's not better next week. After work I went to a special barre class - specifically for our Roost team. After class, Maureen and I went to Denver Beer Company. Out late AGAIN. 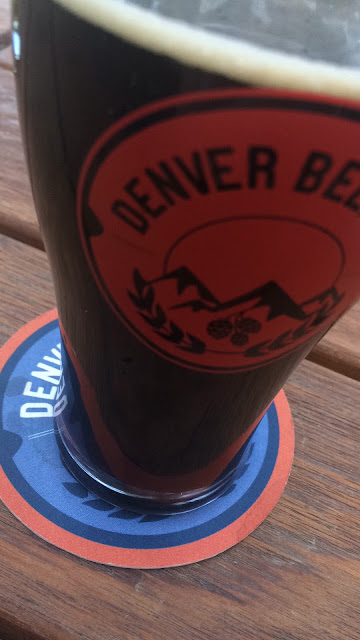 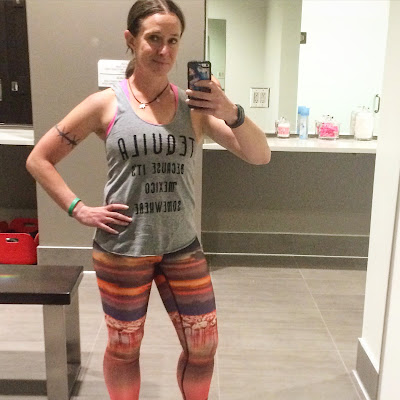 Went to run club after work. Maureen and Colfax and I went to the local dirt track and did a SUPER SLOW (like 14:30 pace) and it was bearable. I was wearing my Hokas, and dirt doesn't bother me as much. Went to dinner at Garbanzo's after.
Thursday (17,798 steps) - Went to Belmar/Lakewood run club. No running (seriously!), but it was still a good time seeing everyone. Nachos and a beer at Rocko's and home around 10. Too old for this! 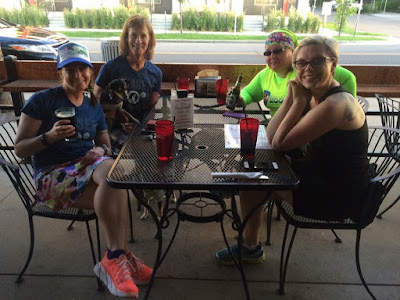 Friday (16,705 steps) - Went to another barre class after work. New to me instructor and the class was way different than others. Rushed home after class for a quick dinner and then went to see the new Purge movie with Rose. It was ... ok. Gory and crass just for the sake of having a shock factor? Oh, and did you know that movies are over $11 a ticket now? I didn't, since I so rarely go.
Saturday (32,020 steps) - Up early for a mash-up Runners' Edge / Runners' Roost Brooks run. I hadn't even "jogged" since Wednesday, so once again, I moved to the slowest pace group and tested out the hip/leg. Had a great time running with the same folks I ran with last weekend. I decided to turn around with a goal of 6. I was going crazy slow, and nothing was "hurting," just the same general fatigue and aching. 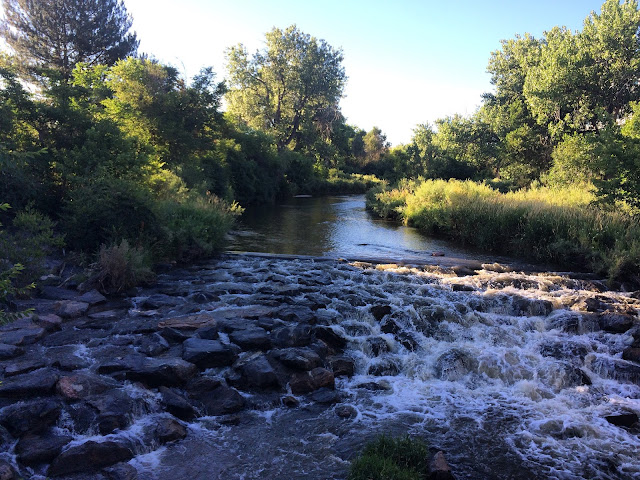 Ran into Maureen who was out walking Colfax, so I cut the run short at 4.7 or so miles and walked the remainder with her. Loitered around the store until about 10 am and then headed over to Grandma's House for another beer run! 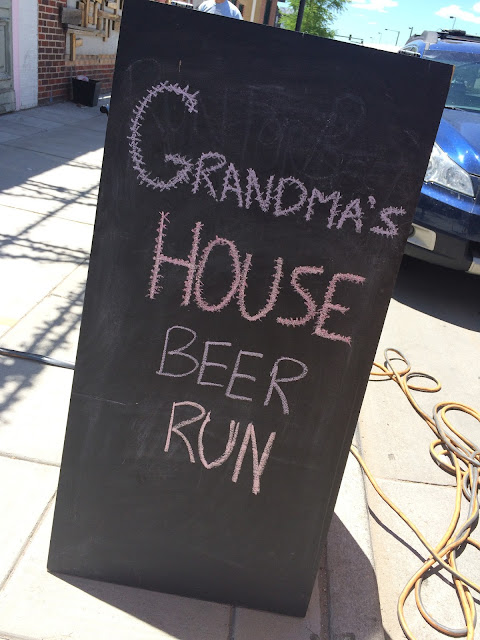 Sadly, we had to walk all of it (Maureen is on doctor's orders to not run and my hip is a jerk), but it was good times. The best food truck ever was there, and I had some tasty buffalo chicken mac n' cheese. 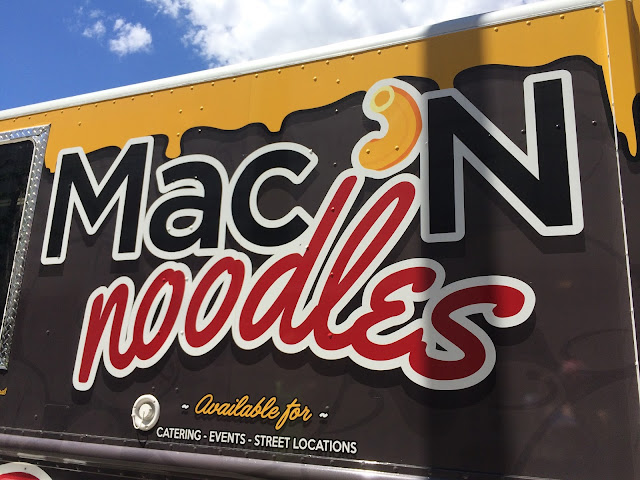 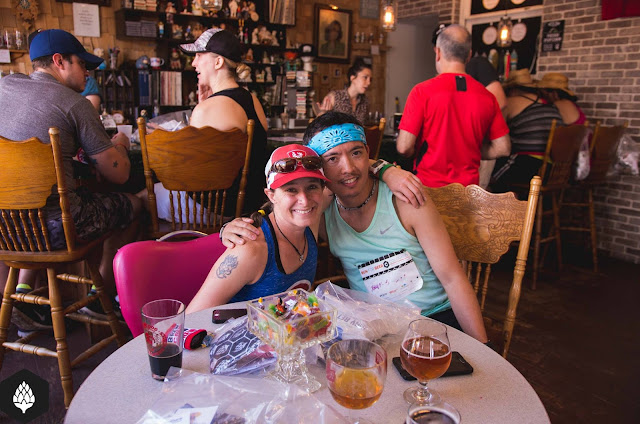 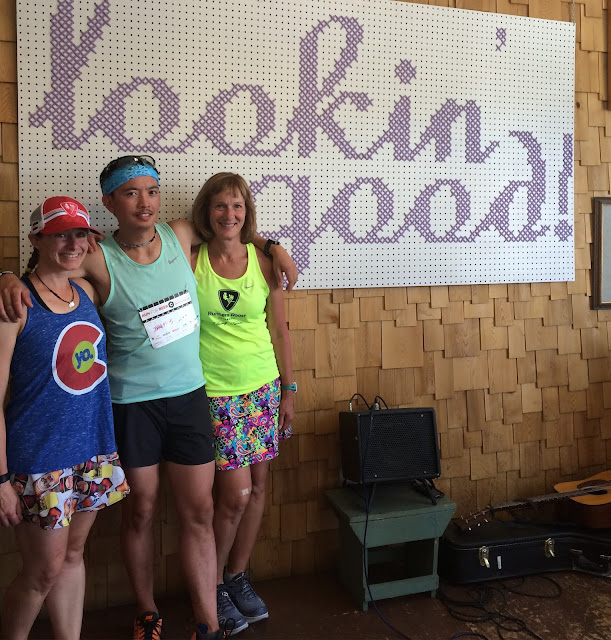 Didn't head home until after 2. Showered, took a nap (kind of), then ... drum roll ... I went on a date. Not sharing details for now, but it was fun and I didn't get home until after 11. Party animal!!!
Sunday (17,332 steps) - I knew I wasn't going to run, but I thought maybe I would go hiking. Then I didn't get up until after 8 and it was already a zillion and a half degrees, so I didn't do anything. I watched some TV, finished my book, then decided to walk to the library to return it. It was so hot, glad that walk was the extent of my outdoor time. Blech. 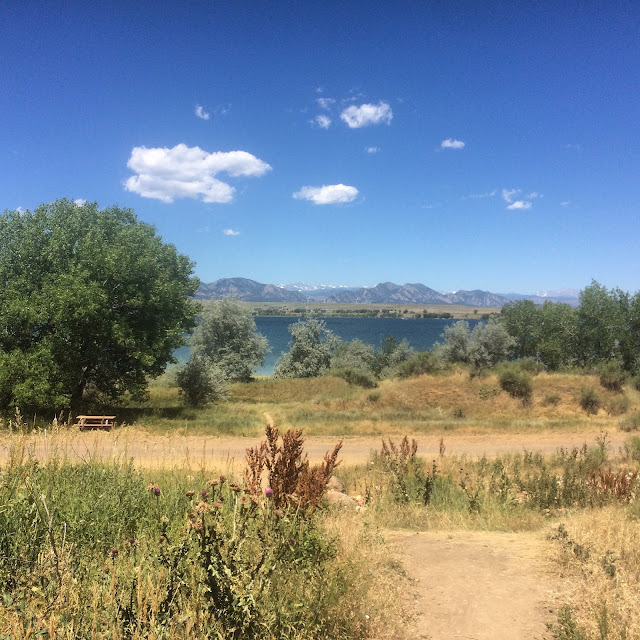 Solo lunch at Tokyo Joe's, grocery shopping and then headed to another barre class - this time Chris and Maureen joined! After class Maureen and I went to Denver Beer Company (again). Managed to only have one beer and then home for more TV. In bed way too late. Again.
Monday (17,165 steps) - I had high hopes of going for a trail run at Lair O' the Bear after work. Planned on taking it easy and seeing how the hip felt. Then I went to Accelerate Health and met with Kendelle (who is infinitely better than the gal I saw on Tuesday). She did some intense ART and needling. Her consensus is a bit different - EXTREMELY tight thigh/glut muscles, and thinks I will benefit from another few days of rest and coming back for some more needling. So there goes THAT... I'll heed my own advice (and that of Kendelle) and take MORE time off. Sad. So the rest of the evening was more TV and some walking on the treadmill.