I was really looking forward to yet another trail race. The Ft. Collins half marathon is put on by Endurance Races Series, and I have run a few of their races. According to the website, this was pretty much going to be the most difficult of all the trail races.  The race did not start until 9:00, but since we were about 1.5 hours south, we still had to be out the door by 6:30. Luckily, we had set up the mapping in advance since we lost all our cell phone service about 20 minutes before arriving at the start, a tiny little church across from Eagle's Nest.

We picked up our packets and used the bathrooms. The bathrooms were inside, but there were only two stalls and we knew there was close to 350 runners between the half marathon and 10k. We peeked at the start line across the street and did not see any port-o-potties there. Uh oh.
﻿ 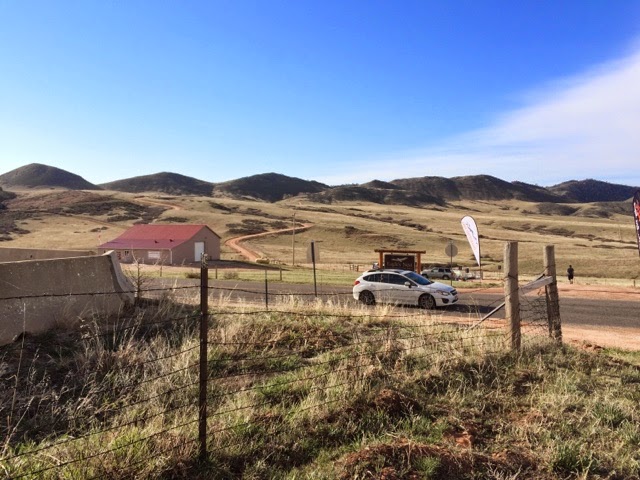 We figured allowing 20 minutes would be enough time to use the bathroom. We really should have left another half hour. We cycled through right when the race was supposed to start, but lucky for us, they started the race about five minutes late.

If you look in the picture above, you can see the road that we were going to be running up for the first mile. As I expected, I tired pretty early and a group of us walked a bulk of the second half of the hill. For the first time in a while, I got the fire calves and I was "glad" I had the hill excuse to walk and loosen it up. It was soooo pretty in this area, and I don't think people minded that I captured them walking :) 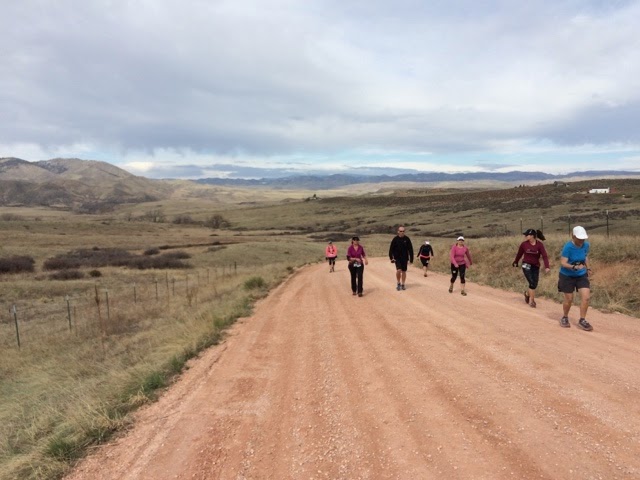 So I started out walking with maybe 10 people behind me. By the time we got close to the first aid station (at the top of the hill at mile 1), I was literally in LAST PLACE. I don't like being in last, but I have done enough races to know that I won't stay there for long. 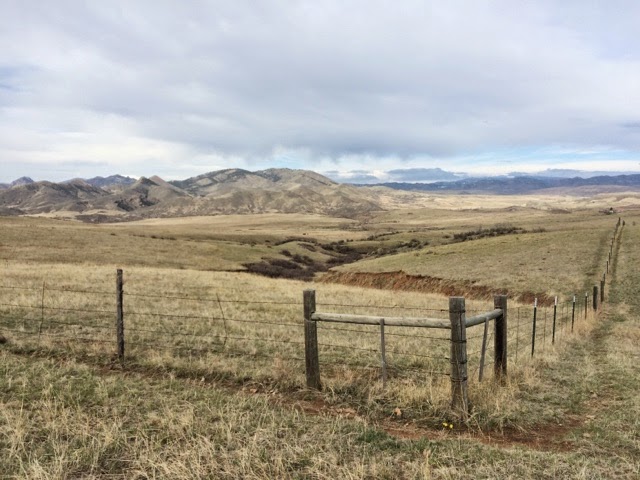 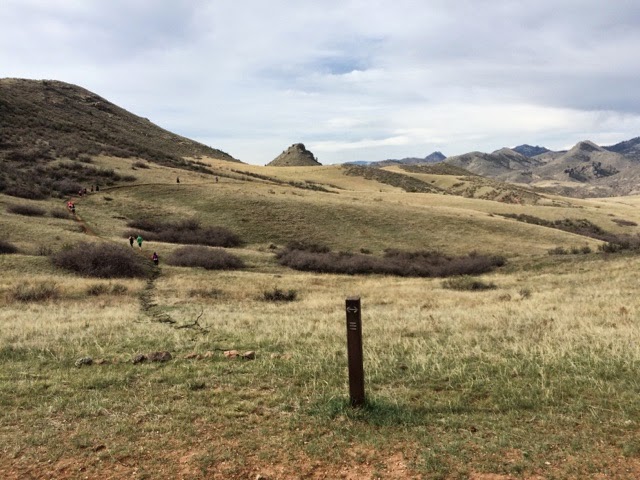 After leaving the aid station we moved onto the single track. It was much more narrow than I anticipated. The 10k was supposed to start 15 minutes after the half and I was worried about the super fast people catching up to me. It did NOT take long for them to catch me. I don't think the 10k started late, so they were only about 10 minutes behind us. I was probably around mile 1.5 when I heard the leader coming up behind me. Womp.﻿ 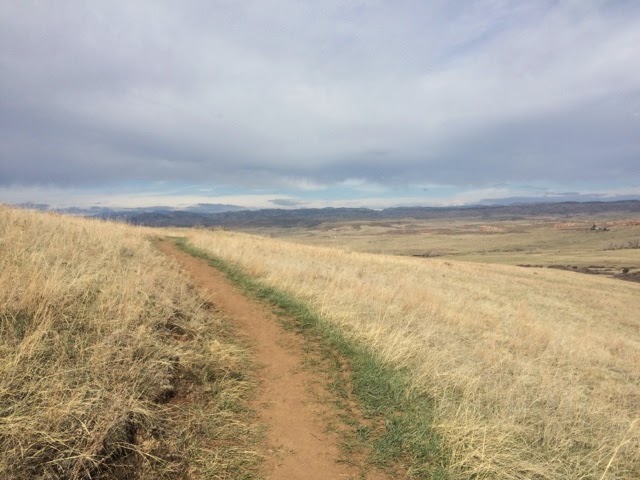 We had some more "gradual" climbing and I was able to fast a few people on the incline and then we came to a glorious downhill. Good for me because I would actually be able to run that section and I am pretty decent at downhill. Bad, because at mile 2, that's when a lot of the front runners were catching up to me and that meant running to the right of the trail and jumping of the trail to let them them pass. I did NOT enjoy that part. 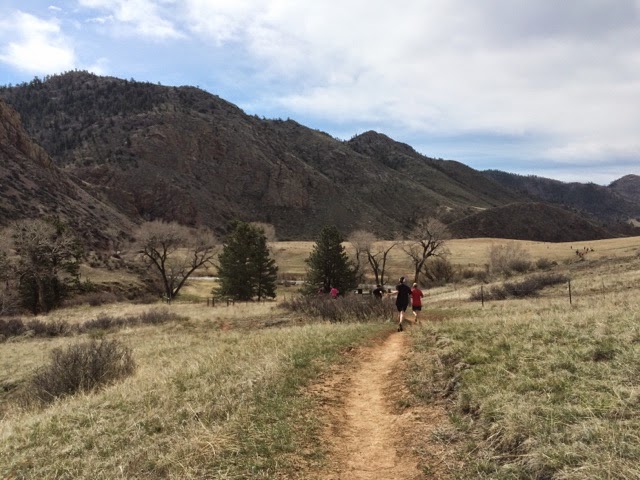 The downhill lasted until the next aid station at mile 3. Luckily with the turnaround I was no longer going to be bothered with the fasties :)  After the turnaround we finally were running near the creek/river, and then headed up another hill to the last aid station of the out and back, around mile 4.﻿ 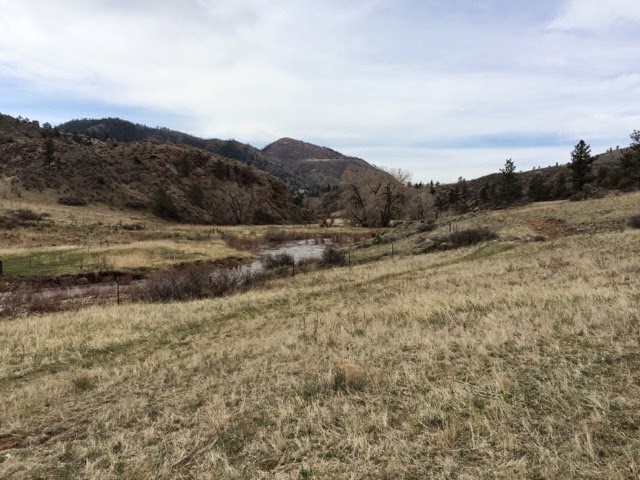 I'm grabbing just a cup of water when I hear one of the gals in front of me talking to the volunteer. He says, "I think the trail is a bit muddy... oh, look, here is one of the front runners, look at his shoes when he runs by."

Oh. So... it was going to be muddy. Thanks for the notice! The trail became overgrown "dirt road" with tire tracks, tall grass and yes, mud. I think we had at least 7-8 sections of muddy water that we had to cross. ﻿ And at mile 5, there was a wider crossing, and what looks like bones. From something.﻿ 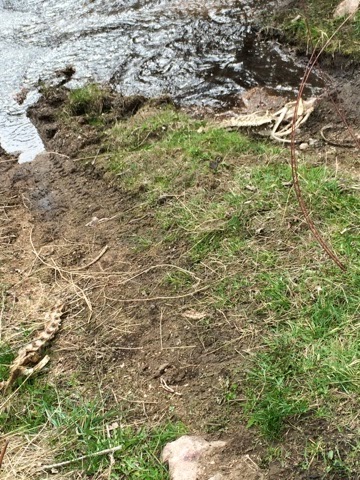 I saw L when my watch said 5.4 - she was CRUISING. I was running with a guy and a gal and we kept running together until we hit about mile 6 - which was shortly before the turnaround. The guy was complaining of having a side ache, I ran past, and they never got back in front of me. 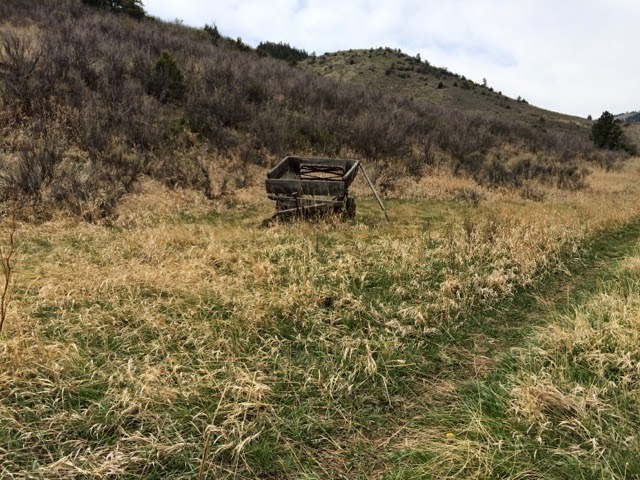 The mile 6-6.5 seemed REALLY STEEP. I almost had to stop walking because I was just dying and needed air. And then - the turnaround!!

I took this picture at the halfway point - which took me about an hour and a half:﻿ 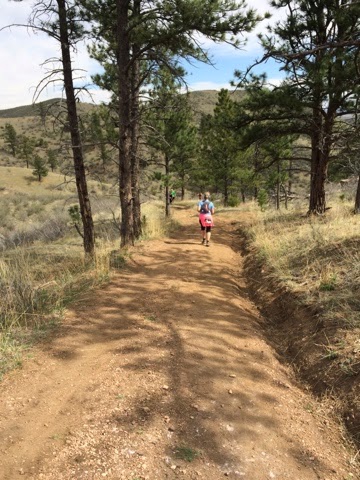 I was hoping that since it had seemed really hard and steep on the way up that it would seem more downhill on the way back.

And for the most part, it did. I think miles 6.5-8 were pretty great. It seemed really hot to me and I was getting tired, but I honestly didn't walk that much. 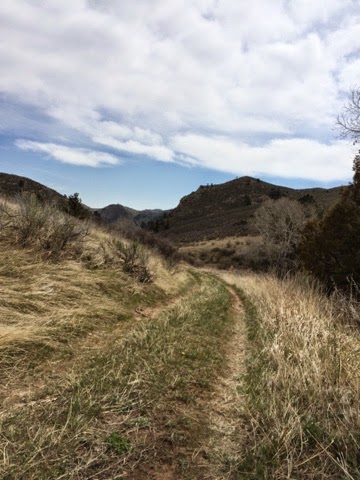 Got to the aid station at mile 9 and passed a few people there. It was nice and downhill to the aid station at mile 10, and I passed another couple of people. There was a small section that was not "quite" the same was the way out and it was pretty steep and I walked a large section of it. There was maybe 1/3 of a mile of flat and downhill, and then we started a climb that was THE WORST EVER.

Maybe about mile 10.7 the climbing started. That glorious downhill at the beginning. OH YEAH. That is what I had to get back up. It was so steep that I was taking breaks. And a selfie: 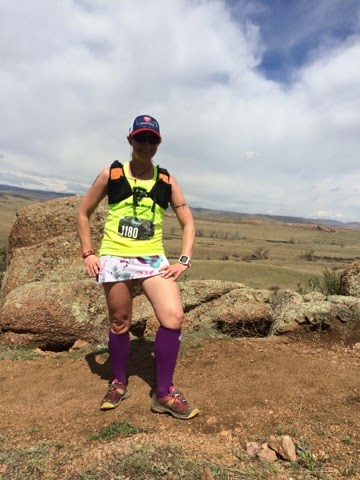 Just past mile 11 and I see a girl who stops and sits on a rock on the side of the trail. I mention that it seems hot and she just sort of nods. I ask her if she is ok and she says she is not feeling well. I ask if she needs anything and she says no. But she doesn't move so I asked if she wanted me to talk to the volunteer at the last aid station and she said yes. It took me 10-15 minutes to get there and... there is no there. Damn it!

I knew that the last mile was downhill and I just cruised it. I passed two more people in the last mile and came in at a very solid pace (for me).

Crossed the line and got my medal and immediately told Luke (who was timing the event) that there was a girl in trouble on the course. A park ranger ended up driving up to make sure she was ok. Scary!! 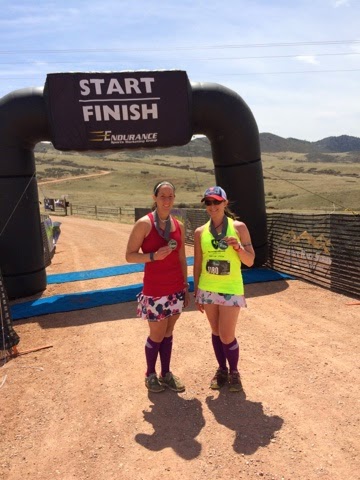