Sunday, April 19
Fruita, CO
Half Marathon #129
Colorado Half #62
Weather - Chilly at start, then perfect. Sunny.
The Trailrunning Festival is put on by Gemini Adventures, the same group that puts on the race that I do in Moab, as well as the Boulder 100 that I ran in 2013. I was pretty excited for this race since TRAIL RUNNING IS MY FAVORITE!!
Fruita, in good weather, is 3.5 hours from Denver, so we planned on spending the night there - especially with the race starting at 7 am. We had plans of leaving Denver around lunch due to the sketchy snow/rain that we had been having the last few days. We didn't end up actually leaving until 3:30 on Saturday. It did snow most of the way, but with warmer temperatures the roads were actually pretty decent.
We stopped for dinner in Glenwood Springs just after 6 and arrive at our hotel in Grand Junction just before 9 pm. I bet I was asleep by 9:30. Doing nothing but sitting in the car sure is exhausting.
Wake up was at 5:30 since we still had a 20 mile drive to the start and parking at the start would be limited. We ended up with one of the last "close" parking spaces. Plenty of time to pick up our bibs and packets and use the bathroom twice. About 3 minutes before the start I realized I hadn't put on sunscreen so I ran back to the car to do that. I had planned to use my Orange Mud vest, but it's kind of a pain to take long sleeves off and take the vest off so I just planned on carrying a water bottle. I was too wimpy to start the race without long sleeves.
I started in the back - and the first mile I was COLD. We started the course on a fairly wide dirt road. It was a bit rutted from tire tracks, but not too bad. The first gradual hill was maybe 3/4 of a mile in. 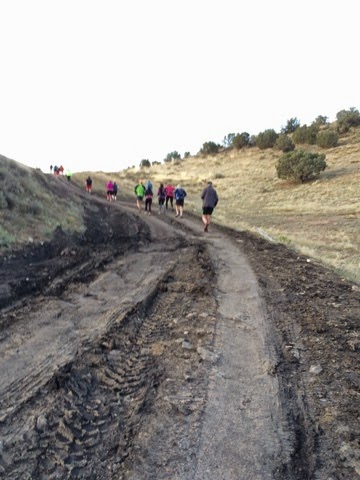 We turned off the road onto some lovely single track. I was already starting to get warm, only 15-20 minutes into the race﻿, so I already took off my long sleeve shirt. The views out here are AMAZING - I love western Colorado SO MUCH. I was happy to have some downhill so I could cruise by some of the slower and more cautious runners, although I kept stopping to take pictures. We had the first aid station about 1.5 miles in, but I didn't stop since it was flat/downhill and I was feeling ok. 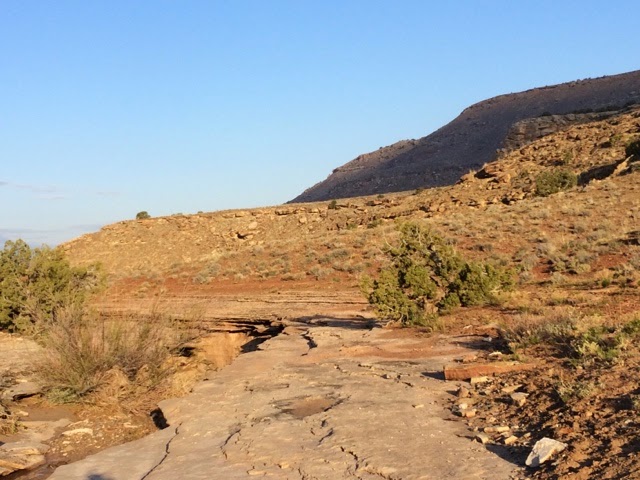 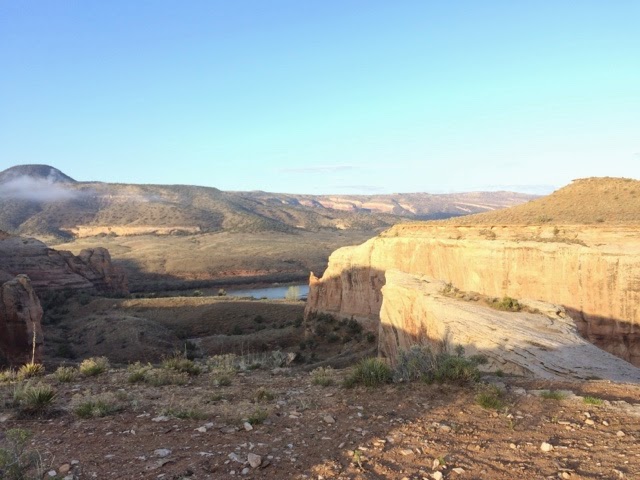 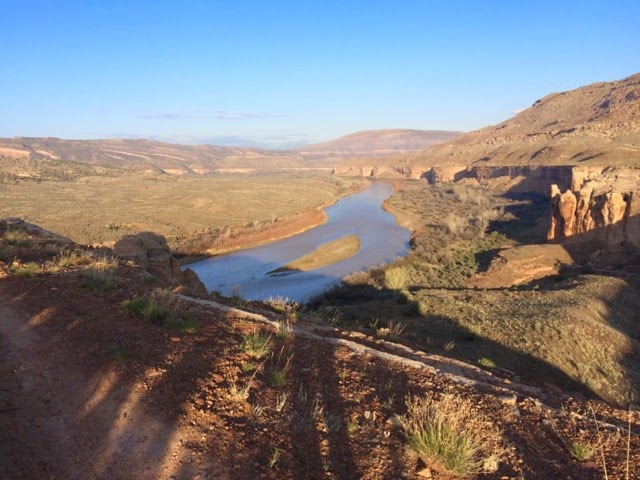 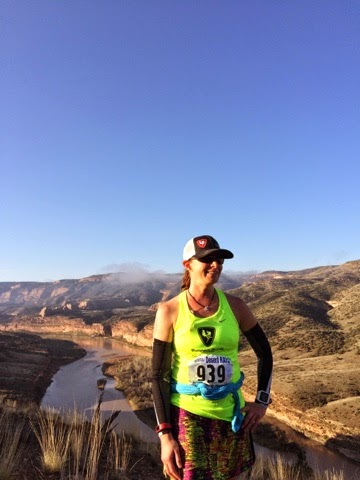 And then the climbing began.... We had a decent hike around mile 3 or so up to the next aid station. I briefly stopped but still did not grab anything. It was decently flat until we hit maybe mile 6. A slight climb and then some AWESOME downhill again - I was able to pass a few more people. I could see the next aid station - around mile 7. I stopped and grabbed a cup of coke and filled up my water bottle about 2/3 of the way. (In retrospect, had I known this was the last aid station I would have filled it up all the way). It was starting to get warm and I knew from what L had told me that this would be the most challenging part of the course. Shortly after starting the major climbs of the course (which I believe were mostly between miles 7 and 10), I ate my Honey Stinger waffle (if you have not tried these yet, you should). I got passed by a few gals on the climbs. Whatever goes up, must come down...
The climbing was pretty steep and I had a rough few miles although it was not as bad as I think I anticipated. 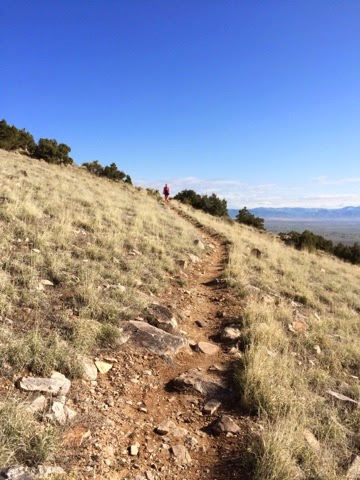 The view at the top though?? SO WORTH IT. I could pretty much see forever. 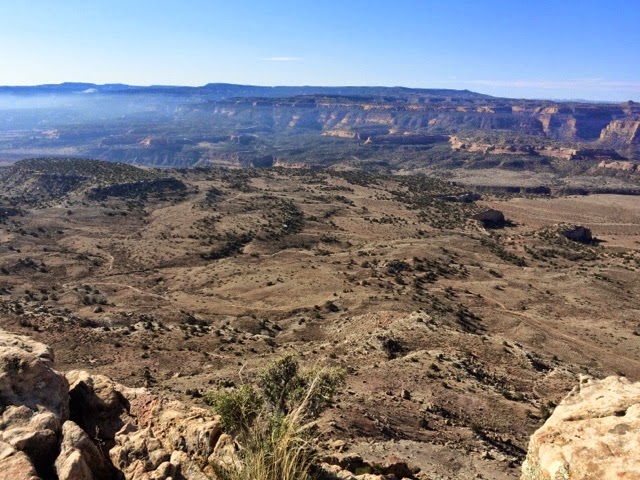 Then - some more downhill, which I was cruising down. I passed the two gals that I had been back and forth with, and then two more on the steeper downhill. According to the course details, the course was actually 13.8 miles long, so when I got to the bottom around mile 10.8, I was thinking that there would be another aid station - and there wasn't. I was getting hot and my water was pretty much gone. We were back on the dirt road, and I was looking at my watch thinking we were going to have to veer off somewhere if we were going to be running as far as I thought. Around mile 11.5 I could actually see the finish/start area, so I pushed it in. The course actually measures 12.7 miles for me - although I'm sure it was the correct length - don't always get the best GPS reading out here in the desert.﻿ 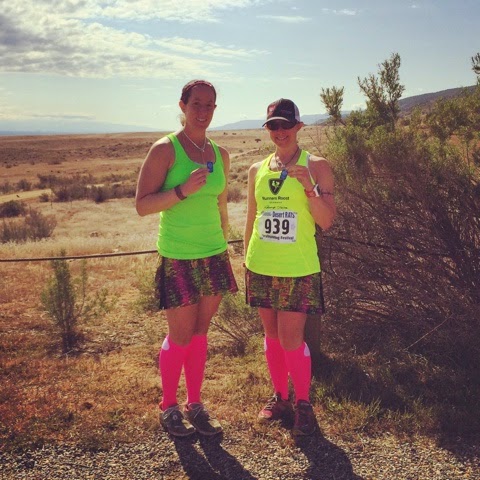 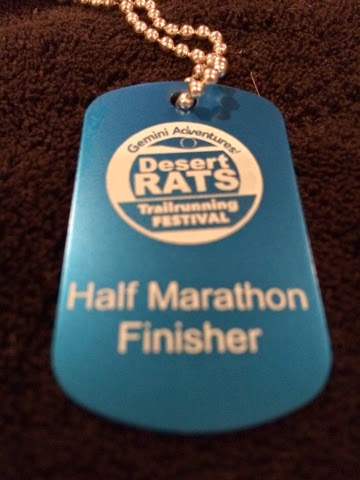 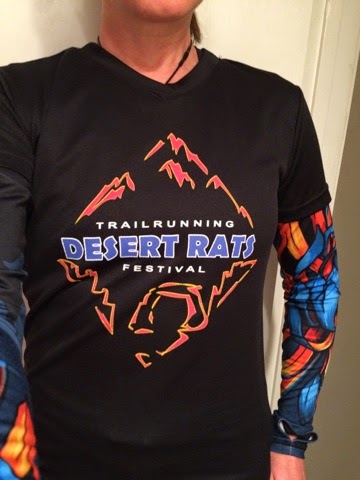