I have had quite a few interesting moments with A over the last few days. Since I felt guilty about being gone all weekend, I decided to take the night off from the gym on Monday night. I told A we could do whatever she wanted for dinner. Being a kid, she picked McD's. What IS it with those play areas?

So we are pulling into the parking lot and I ask what she wants to eat. She says "leaves" and adds, "I mean a salad, like you eat. Only with no tomatoes. And croutons." You should have SEEN the face on the cashier's face when A ordered that. She wanted a salad kids meal. Apparently such a thing isn't possible, but it was worth the extra dollar to just buy her the salad on the side. And she also ordered the apples instead of fries (she has been doing that a LOT lately). Have I mentioned how awesome this kid is?

Then while we are eating she says she wants to run in the morning. But this time she wants to run around the lake again so she can get a hot chocolate afterwards. The weather has been unseasonably warm, it was in the low 40s and sorta sunny when we headed out. It's almost a ten minute drive to Lake Arbor. The sun was barely coming up because we had to go early to make sure that we would have time to get ready (me for work and her for school).

She had to walk a few times, but I just love that she doesn't get upset about that, and that she keeps at it. I never would have imagined she would have gone out running with me more than once or twice, yet she continues to ask. I love it!

She was getting pretty tired toward the end, and I told her we needed to hurry, so here she is sprinting toward me.

And of course the post-run picture. 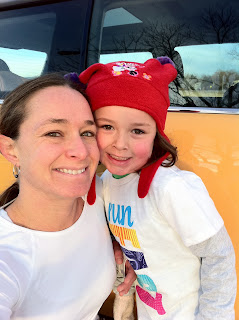