The Las Vegas Rock 'n' Roll half marathon was one I signed up for AGES ago. Long enough ago that I was planning on only doing a race a month. Hmph. That didn't last long.

I had intentionally booked a room at the Luxor. For two reasons. First - it wasn't nearly as expensive as most of the other hotels at that end of the strip. Second - it was only one hotel away from the start line. We had a tough time finding out when the actual start was, but the info stated we could get in our corrals at 6:30. We didn't figure we needed much time to get ready and over there, so we didn't get up until almost 5:30. L and I are professionals. We have done race day together so many times that we have it down to a science. R sorta threw off our routine and we started to get a bit panicky. We still weren't REALLY sure where the start was, just the general vicinity. The nice thing about a race this size is you can just follow the herd and you will get where you are going.

R got a picture of the two of us - one of the few times we aren't wearing the same thing! I had Leah at Sparkle Skirts custom make me an Elvis type costume. I already had purchased the skirt (months ago), and she made me the awesome top and belt!

After we got all our pictures done, we headed for a quick bathroom break - so nice to be able to wash hands afterwards, then headed outside. And much to our dismay... the corrals were lining up backwards. So we had to go all the way past most of the runners. R was all the way in corral #3, and we were moving against the flow of traffic. We get to the corral with just minutes to spare, and there is a port-o-potty literally a block from the start. With no line. I go again. Better to be safe than sorry. Get my headphones in and pretty much walk up to the start line and go.


I knew this race was going to be mentally tough. The strip takes a LONG time to walk. And knowing we were going to have run it both ways and then some... well, it hurt my head just a bit thinking about it. I was also a bit worried about my race outfit. I had never even tried it on before, much less RUN in it. I was using a different pouch to hold my phone, and managed to secure it under my Elvis belt so that nothing bounced around. All in all, my outfit was the least of my concerns. The first mile or so I was doing more weaving than I like, but... WOW. This might be the biggest race I have ever done. There were SO many people. And quite a bit of spectators!
It seemed like the water stations were pretty close together, less than every two miles. Which was NICE. I was getting hot with my collared shirt. I was feeling "ok" but not great. Passed the Stratosphere (over 4 miles) and then heading into the "other" part of Las Vegas and I noticed a small bar was putting out cups of beer. 4.75 miles in and yes... I had a cup. Not sure if it was a good idea or not but I felt obligated to! I was hitting a decent pace when I passed the 10K marker, but I was starting to feel tired. And I knew exactly what I'd be looking at for the last 4 miles.
There were actually not that many people in costumes, and I got lots of comments from other runners and volunteers about mine. 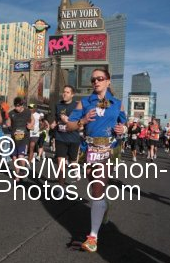 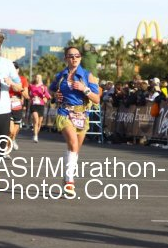 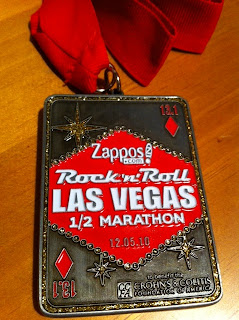 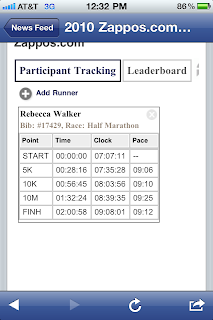 We headed back to the hotel to shower and change, and then it was back to the finish line for... BRET MICHAELS OF POISON! I had no idea he would actually be singing songs from Poison, and it was a BLAST. I saw him in concert last summer, and out of all the bands from that time period, he still is a great performer - and his voice still sounds awesome! 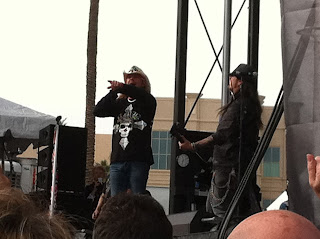 By the time they were done singing, we were STARVING. And we had our hearts set on Fatburger. So... more walking. Another mile or so down the strip and I had a fabulous burger. Mine is the "little" one on the left. J's is on the right. 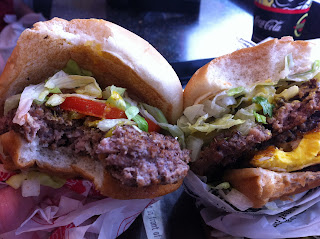 After lunch? More walking. We went back to the hotel because we were a little cold. Changed clothes, and then back up the strip to the wax museum. 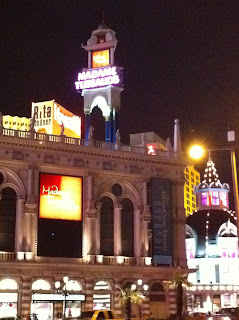 This was a neat museum because it was "interactive" in the sense that you could actually get close to them and get your picture taken. This is my favorite: 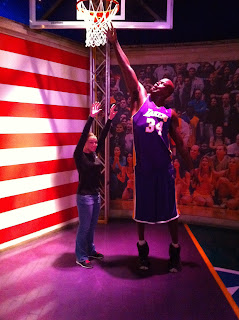 Then we headed to Fashion Show, where I "just" missed Santa Julius at the Paul Frank store. By less than five minutes :(

Then.... you guessed it. MORE.WALKING. Heading back down the strip where we were going to relax for bit before deciding how to spend our only real night out.

We stopped inside the "Munchbar" for snacks. Sweet potato fries, Miniature grilled cheese and Philly Cheesesteak sliders. DELICIOUS! Since it was happy hour, appetizers were 50% off. Cheapest meal of the trip! 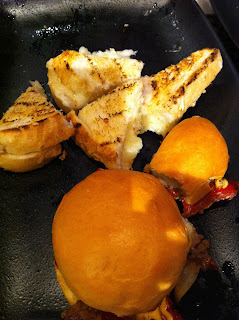 We stopped at the gas station across the street and bought some beer so we wouldn't spend as much if/when we went out. I had one and then I dozed off for a few minutes in the room. By the time J decided it was time to go out it was almost midnight and raining. R and L were both asleep so we decided we would just hang out downstairs. I played a few slots, and actually left with a small amount of money. 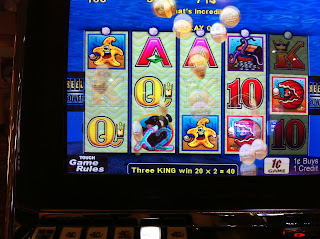 We got tired of beer, so we stopped at the "Slushy Stand" in the hotel lobby and got some drinks. Mine was called "Call Girlz" and was berry flavored with vodka. SO GOOD. Then we stopped for a snack (I had a chicken quesadilla) before heading to bed for the night just before 3:00 am. 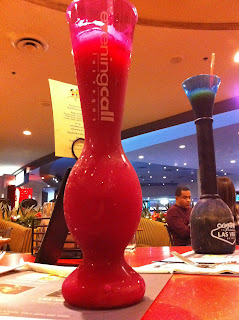