First off - how is it 2019 already??? Madness. This year FLEW by. Just a quick recap  for the last year - still at my same law firm downtown (well, same one for the last year and a half). Work has been a lot better (more bearable) now that A can walk to school and I don't have to drive her to and from. I am able to come in earlier and avoid all the traffic. Plus, when I'm extra motivated, I can go to the gym before work! If you missed the "subtle" insertion, I have been dating someone for a few months now. So far, going well, but we are taking it slow/easy and both of us aren't putting any pressure on "where is this going." A is still awesome/amazing and is doing great at school - half her classes are advanced, so that's been a change - love seeing her challenged! As for running, we are both running, she is currently running with the track team at school - hopefully I can convince her to run a few races, although she seems somewhat uninterested. I happily ended 2018 with my highest mileage year (1800!) and way more vertical than in years past (156,155'!!) What's next? I have only a handful of races on my schedule - but they are BIG ONES, with the first one in just over 4 weeks... looking forward to 2019!

Tuesday (13,368 steps) - We had a ton of options for our run. Decided we didn't want to get up early, so we opted to run Bear Creek with the group Laurie Williams organized. It was almost as cold as the day before, the difference being that the sun was out. A ran with the fast ladies, and I ran with Dulce, Mo & Colfax. 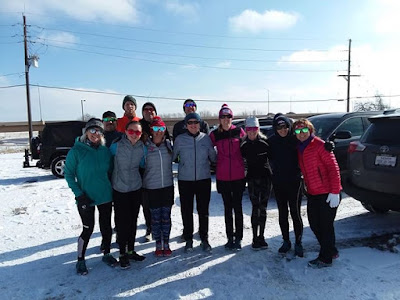 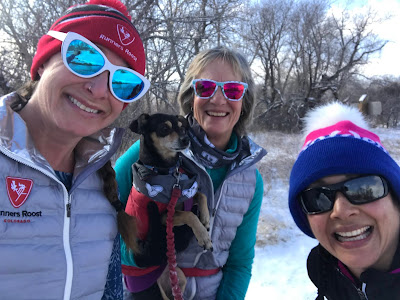 Holiday Bar after for snacks, a beer, and a really fun white elephant gift exchange. 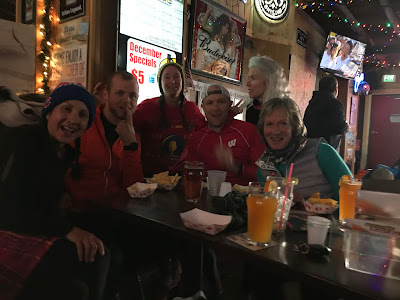 Ben came down later in the day. We went to 4 Noses and then picked up pizza on the way home. 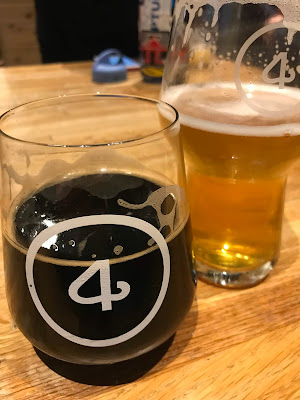 Watched a SUPER weird movie - Arrival. (I think I do need to re-watch though, I had enough beer that I was having trouble focusing).
Wednesday (15,355 steps) - Felt junky allll day. Kind of glad that we were going to be doing the "easier" road run. I forget that basically everyone in Boulder is elite, though. I started out with Kristin, running a bit of an uncomfortably fast 10 minute mile pace and we quickly lost the group. Not super fun, especially since we were running an unknown route to the Colorado Athletic Club.

Anyway, managed to get there (slowly) - did a quickie free "boot camp" class, then ran back. Should have been about 4 miles, ended up being about 5.5. Blech. The way back was a miserable struggle with pretty severe numbness in my feet. Ick.
Thursday (14,789 steps) - Core class during lunch. Belmar run club! I didn't "need" to run, but decided I would go out with Mo and Colfax. I had another pretty crappy run. More numb feet and just overall fatigue. 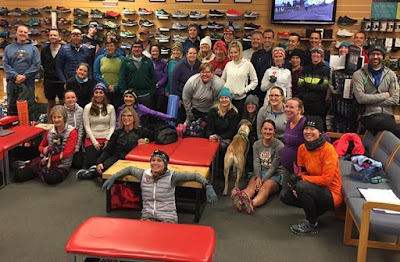 Friday (11,447 steps) - THANKFULLY, the January streak challenge doesn't require running. A and I went for a nice walk to the lake after I got home from the grocery store. Yay for a "rest" day!
Saturday (36,212 steps) - Ecstatic that we didn't have an aid station. Lisa and Jandy tried desperately to talk me into running 20 miles. I was not having any of it. I decided on 16 miles, as that was my longest run before Javelina, and everything was fiiiiine.
I struggled a bit on the way out, and I was glad that I had opted to turn after 8 miles instead of running the 10 mile loop with the group and going back out. I put in my headphones for the last 8  miles and they really weren't bad, although I got HOT. I had been wearing a thin Oiselle top, but after about 13 miles I was unbearably warm and actually ran the last 3ish in my sports bra... 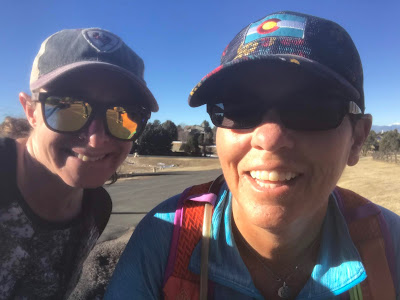 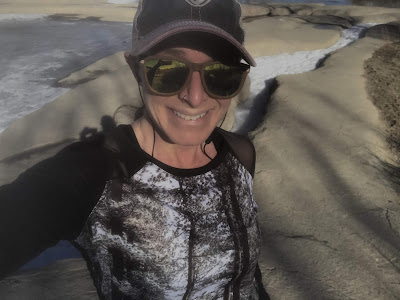 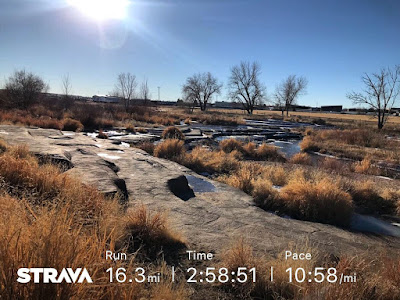 Sat around at the store chatting for a bit before heading home to shower before meeting Kristin and Doug at Kokopelli. Good beer, great pizza, and even better company! Fun afternoon! 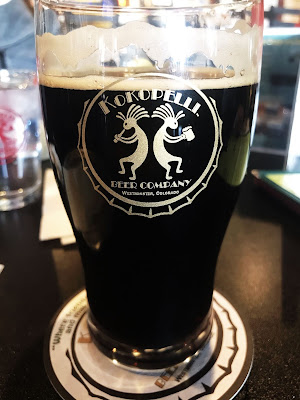 Pho for dinner, which I wasn't sure was a good idea the night before a race, but, eh. Life is short, right?
Sunday (20,451 steps) - RMRR January trophy series! For the last 4-5 months I've been pretty successful doing intervals for an overall faster pace (mainly because I have absolutely no idea how to pace short distances anymore). This did not work out like that. Having run this race 3 other times, I knew that the first 5K would be a gradual uphill. That didn't seem to matter to my brain. First mile went fine. Second mile I wanted to die and walked a lot. Third mile I tried to redeem myself. Back half wasn't great, but certainly better. Disappointing finish for sure. 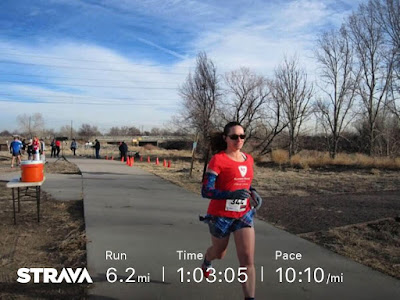 Meanwhile, A totally KILLED it and ran a new PR of 54:10! (And that is with basically no running over the last few months). 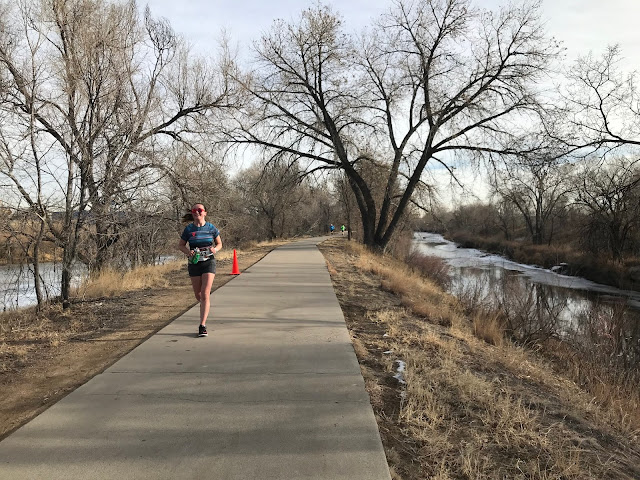 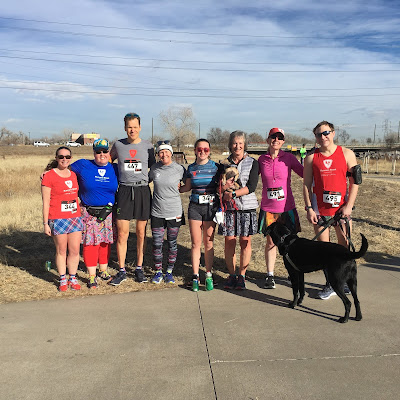 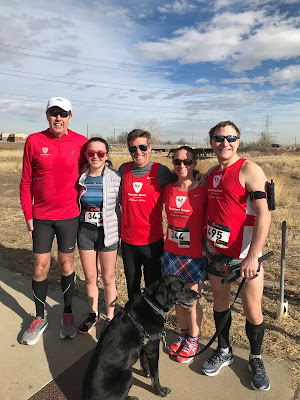 We went to Torchy's after with Mo (like last year). Always good food, conversation and company. 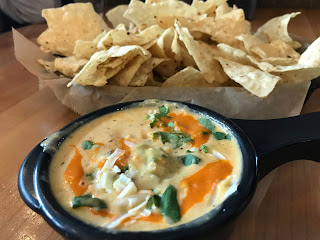 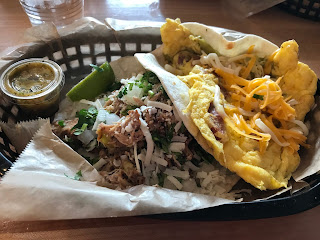 I convinced A that we were super motivated and we spent a few hours cleaning. Finally got rid of the last of the stuff I was holding onto after purging/minimizing last winter/spring.
Monday (15,649 steps) - Core class during lunch. There were three other people in class, all men (and I recognized all of them from last fall. Class to ME seemed really easy, but all the guys were struggling. I bet they felt emasculated when my trainer kept saying "Rebecca is doing fine! She is kicking your asses!!" He also told me I'm "gifted." I don't know about THAT, but it made my day! A spent the day with Ang and the girls, so we were able to make it to Stapleton for the Nuun Olympics. 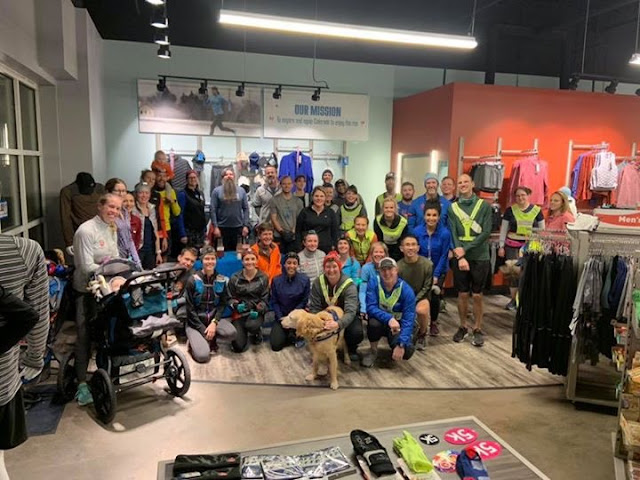 After RMRR's tragic attempt at running fast, the pace I ran for the 5Kish route (only a few seconds per mile slower) felt easy. So that was nice. 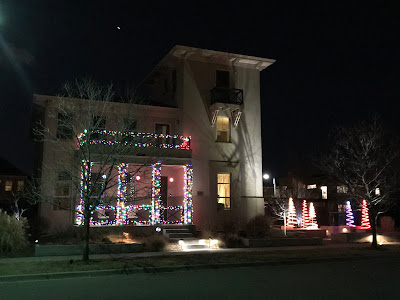 I sadly don't have any pictures from the actual Nuun Olympics, which is a shame, because it was a lot of fun.
Decided last minute to skip going to Station 26 and ended up sitting on 270 for over half an hour because there was a semi fire.