Tuesday (13,348 steps) - Woke up around 8. Lounged around and watched TV while Ben (and sort of A) made breakfast (including giant cinnamon rolls, eggs and TWO POUNDS OF BACON). Around 11 we decided to take Pika for a walk. Ben suggested that we grab the sled, and it ended up being the MOST FUN EVER. 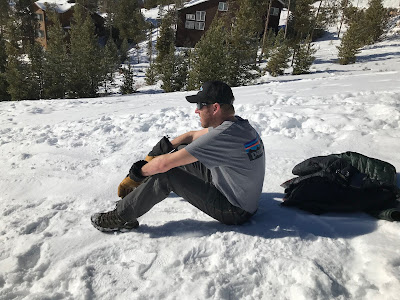 We ended up sledding for maybe an hour - it was a lot of fun, although every time A and I went down together we ended up in a snowbank. We decided to drive back home shortly after lunch. I went for a quick run, then we headed over to Rachelle's house for Christmas dinner.

Ben came over later - with Pika. And Batman was NOT happy about it, especially when she sat in "his" chair. 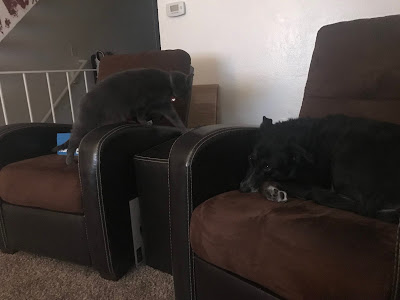 Wednesday (19,339 steps) - The holiday totally screwed up my gym schedule. I ended up taking a core class even though I normally take Wednesdays off from the gym. It was a great workout, and I felt every single cookie I ate over Christmas. Blech. Runners Roost Boulder! 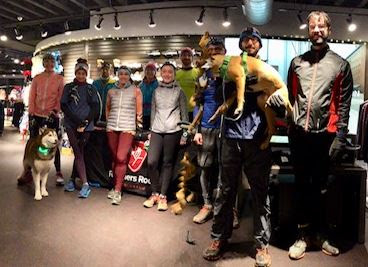 A much smaller group than usual, probably because it was lightly snowing when we first got to the store. It wasn't super cold and the trails were in good condition. Overall, a good run! 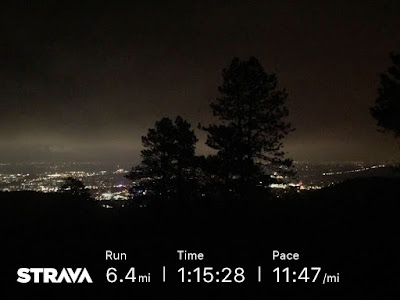 Thursday (14,480 steps) - Berkeley Park! I started the run earlier because I'm slow and I knew everyone was planning on running short. We all went out to Call to Arms for drinks after. Fun night! 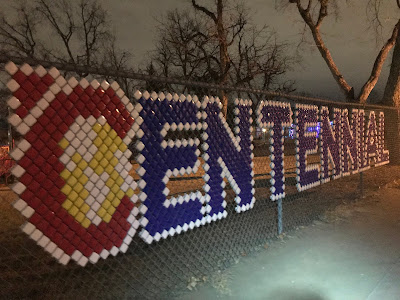 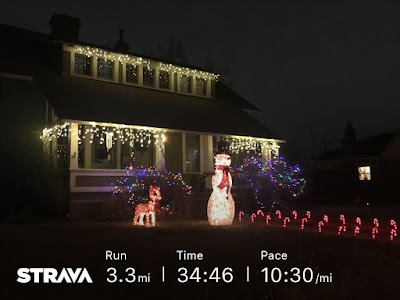 Friday (13,060 steps) - Hopefully my last lunch run for a while. Finally it is starting to feel like winter, and it was cold. The run was actually not terrible, so that was nice. 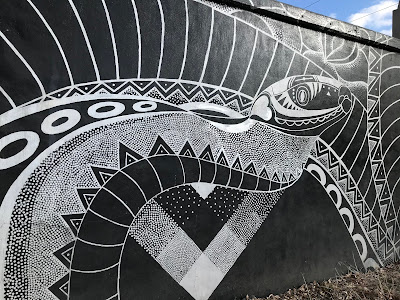 Also, the filing group ordered pizza and had a ton left over - so I had a few pieces the size of my head. Man, I love pizza the most. 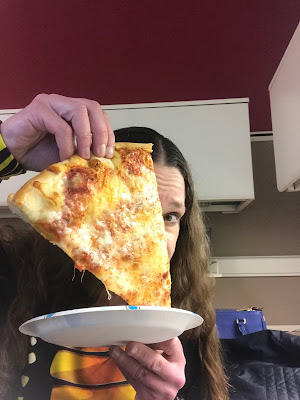 No recollection of the rest of the evening, although I'm assuming we had dinner and got our aid station ready.
Saturday (30,046 steps) - Runners Edge! It was freakishly cold when we got up and set up our aid station (single digits!). 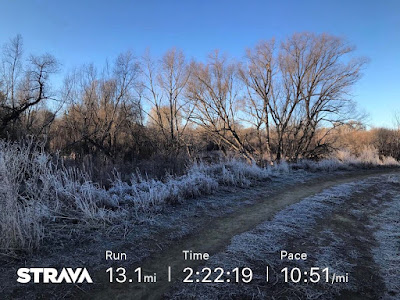 Thankfully the run was literally in our backyard (seriously, the mile 7 marker is the path behind our house, so A had plans on heading home while I went out to run more. I took only 2 pictures the whole day because it was so cold. Overall, the run wasn't bad, and I finally managed to hit the half marathon distance for the first time in ages.

Decided that pho sounded amazing for a cold day - so we went out to lunch after I prepped dinner in the crock pot. (Seriously, someone needs to remind me to just buy the pre-cut chicken, because it was NOT fun cutting up 2 pounds of it. 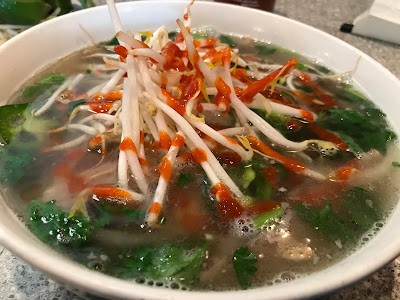 Such a good (AND EASY) think to make - chicken and a jar of green chili salsa, over a bed of brown rice. Tasty! 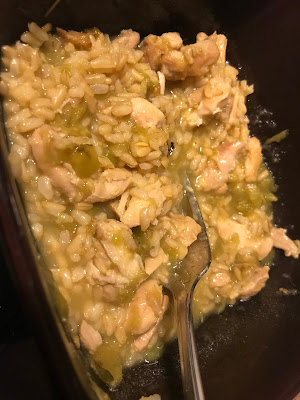 Sunday (12,388 steps) - Initially we had plans on running in Waterton again with Phil and the Happy Trails running group. Then we heard about a run downtown at the Milk Market that offered a free drink (and access to amazing breakfast foods). An easy choice to cut the drive in half. A needed 4 miles to hit her (revised) mileage goal of 900, so we ran with Mo & Colfax to Mile Hi. I was a bit overdressed, but the weather was really nice. 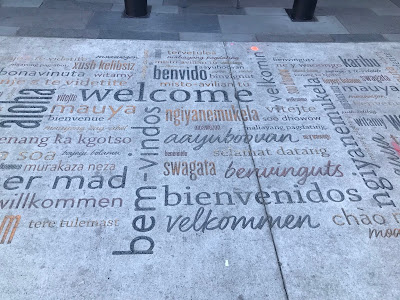 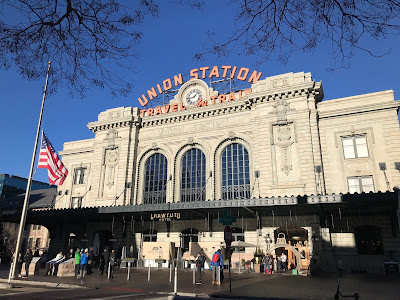 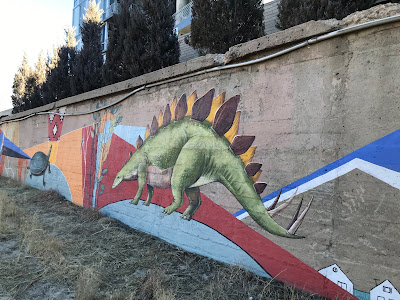 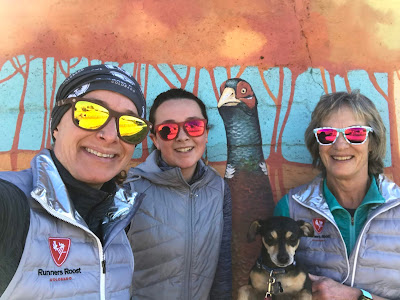 We met up with Ben, Greg & Andy for beverages and food. A happy coincidence that the run coincided with National Bacon Day! Bloody Mary with bacon!! (And lots of hot sauce). 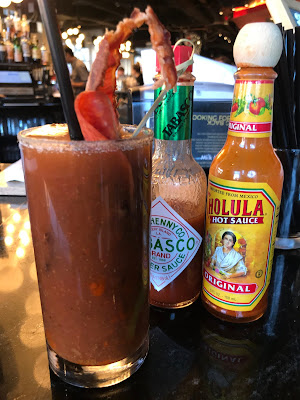 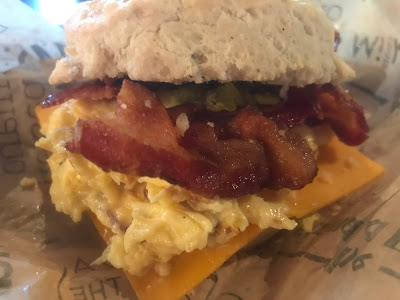 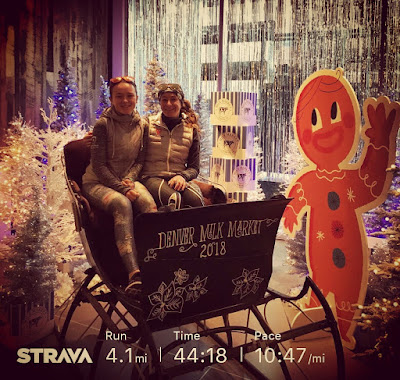 We watched approximately a million hours of TV. Ordered pizza for dinner, because we are lazy.
Monday (25,349 steps) - I stupidly didn't run more miles when the weather was nice, because I needed 10 miles to round out the year with 1800. The day was going to be the coldest of the season, and it was only going to get colder/worse as the day went on. I headed out around 8:30, forcing myself to run a loop so I wouldn't double back early. The first 5 steps or so weren't terrible, until the wind hit me. And the snow. 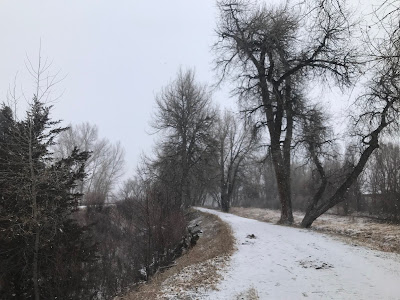 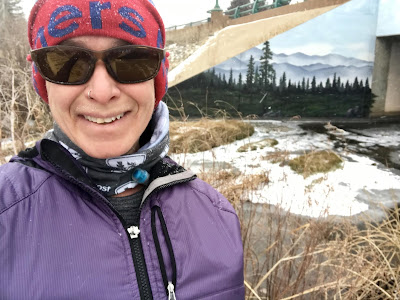 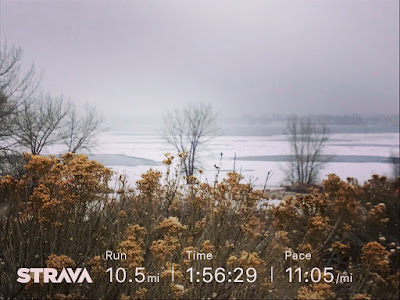 Overall, not my favorite run, but nice that I have found a pretty decent loop, in the event I get sick of running the trails to the dog park. Got home, found that my hair was frozen, immediately got in the shower.

Started our movie marathon (DVDs, not actual TV), stopping only long enough to go to the grocery store and pick up dinner. 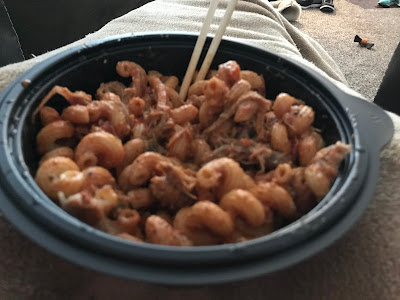 Did not break tradition of not staying up until midnight, headed to bed about 10 minutes before. LONG day!