Tuesday (14,006 steps) - Decided to run before the gym again. When the weather cooperates, it's a really nice loop! 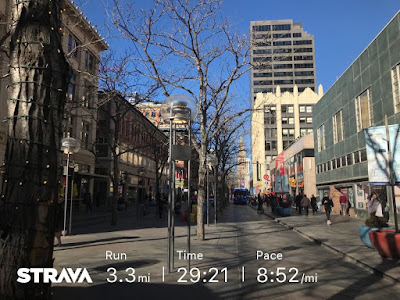 Strength class after, two regular rounds and a lightning round. I'll be feeling that later.
Wednesday (16,488 steps) - Went to Berkeley Park for the monthly sunrise run. I was able to run the entire loop, although my 10 minute miles were by far the slowest. Thankfully, there was one gal that ran with me. 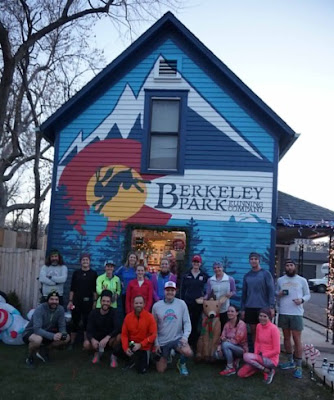 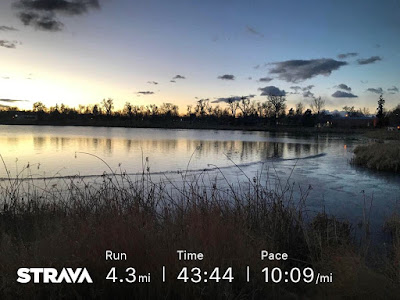 No Boulder run club because there was family dinner (pizza!) at A's school. She was inducted into National Junior Honor Society AND she had her second orchestra concert of the year (although first one for her since she moved into the advanced class). 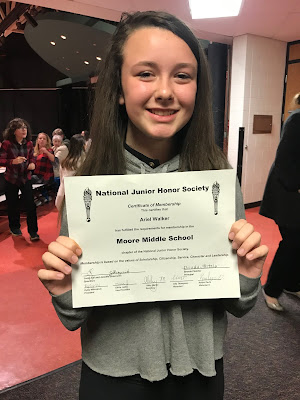 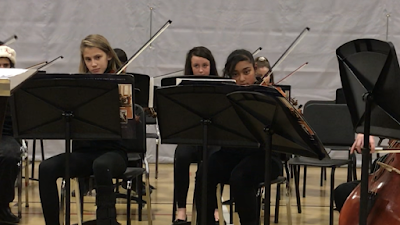 Thursday (13,668 steps) - Core during lunch. Belmar run club! I ran with Mo and Colfax again. We stuck around for the presentation with Olympic marathoner Scott Fauble (and got burritos!) 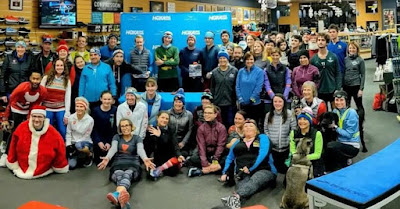 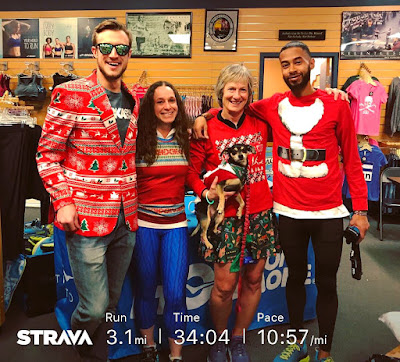 Friday (17,944 steps) - Spent all day hoping the office would close early. With no end in sight, I went for a run at lunch - and it was actually REALLY good. Managed a 10K in about an hour, pretty much the fastest I have run in a million years. 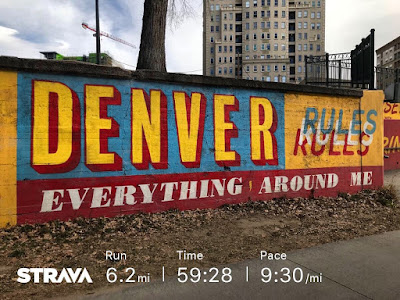 After work I stopped by Berkeley to pick up somethings and chat with Phil. A and I went to Sweet Tomatoes for dinner, stopped by the liquor store to stock up for the long weekend.
Saturday (24,825 steps) - Runners Edge at South Table! We were not able to keep up with the fasties, and apparently none of us can read a map. We ended up running less than we wanted to, so Lisa & Alexa and I did another three miles on the plateau. 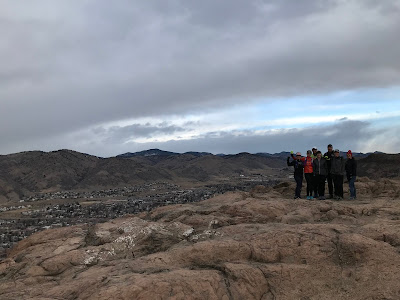 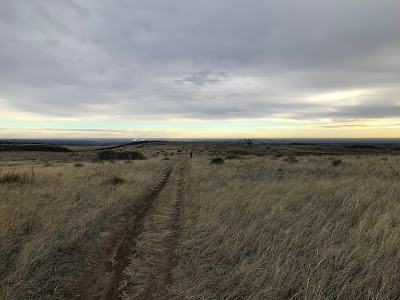 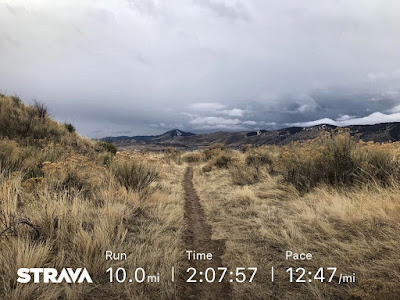 I got a nasty nosebleed with a few miles to go, so that was fun. Met up with Sheila, Pete, Janet for breakfast at Table Mountain Inn. Grocery store, shower, then up to Heather's house for friend's Christmas.
Sunday (22,724 steps) - Met up with Laura and Maureen to run in Waterton. I had hoped to run 10, but the early miles were tough. Laura kept running, and we turned around at 4 miles. 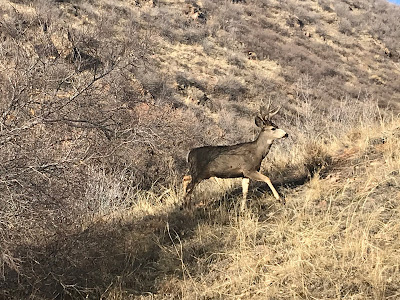 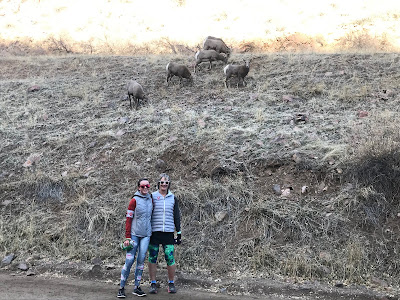 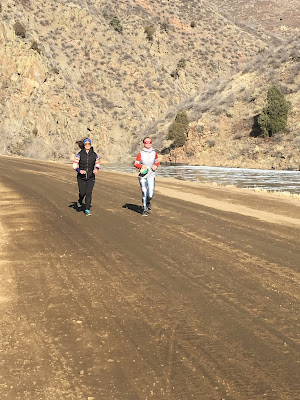 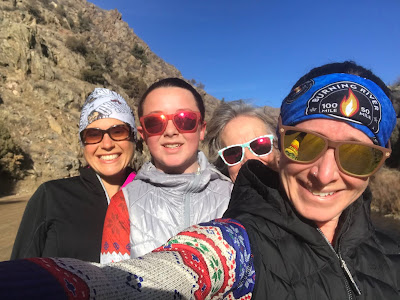 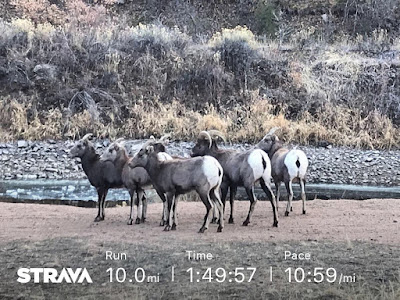 Got Colfax out of the car and then did two miles in Chatfield, so I did get my 10 miles in after all. 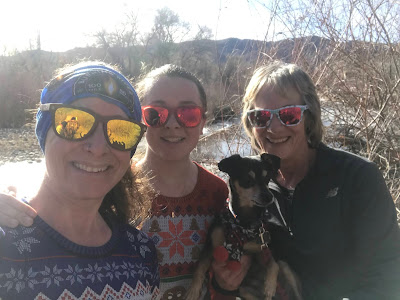 Went to IHOP for pancakes, and Ben met up with us. 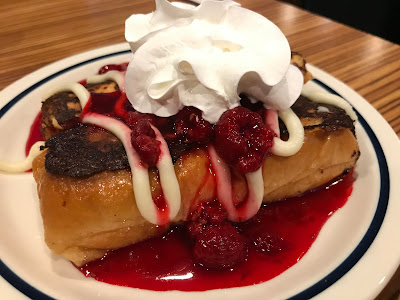 No recollection of the rest of the evening.
Monday (18,950 steps) - I had been watching the weather/CDOT app all morning to see if we would be able to drive up to Dillon to Ben's house. I had forgotten to turn off my weekday alarm, so I was up at 6. Went for a run, did laundry, dishes, showered, etc. 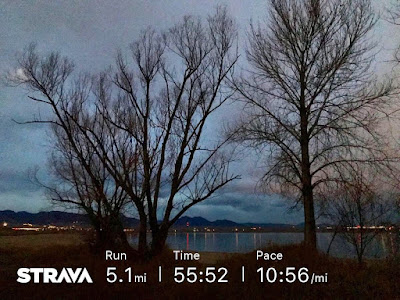 Got cleared to drive up, so we ordered Torchy's to eat on the way and left around 10. It was snowing pretty decently on the other side of the tunnel, so it was nice we didn't have to go too far. Spent the afternoon hanging out, took Pika for a walk, went to the store (and bought the most random items ever), hit up Outer Range Brewing, and ended up eating at a random place that was actually open. 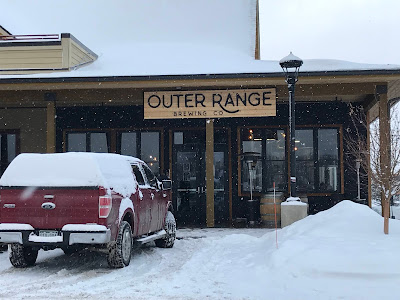 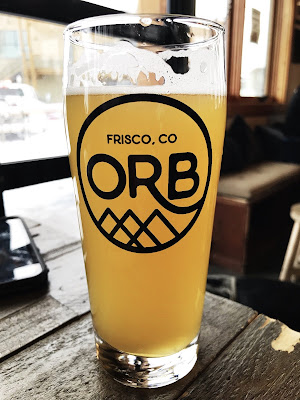 Had a very hard time staying up because of alllll the beer. Watched a bunch of random movies - whatever happened to be on.