Tuesday (15,211 steps) - Slept like crap. Again. Woke up at 4, and finally decided to go for a run around 5 since I obviously wasn't going back to sleep. Ran a route I haven't run in a while, it wasn't the most terrible ever. 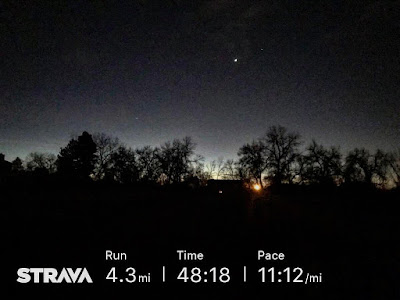 Gym during lunch for a strength class with the new trainer. No one else signed up, so it was another one-on-one. Met up with Ben at Torchy's for a beer and tacos.
Wednesday (18,384 steps) - SO.SORE. allll day. I don't know why, it's not like I haven't been doing strength/core for months/years. Either way, run club in Boulder was definitely a struggle. As I predicted, we ended up going up Bear and down Skunk. A ran with me until we hit the road on the way down. It was interesting that as awful as I felt for most of this run that I still set some segment PR's. Crazy. 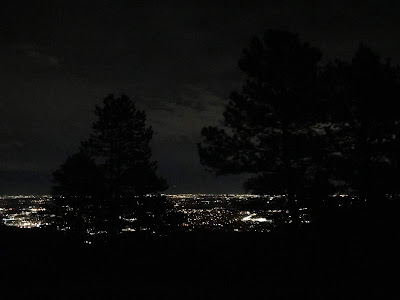 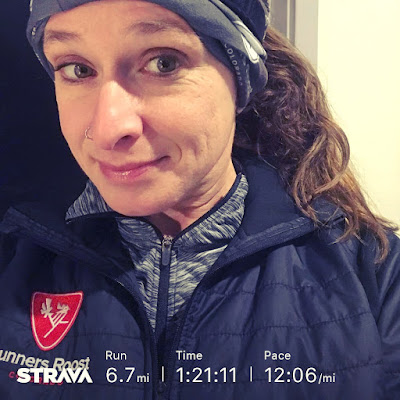 Thursday (14,515 steps) - Finally a good night's sleep! Went to the gym at lunch, only to find out the class I had signed up for had been cancelled. When I asked why I didn't get an email regarding the cancellation I was told that I had been called... really? No one left a message. Either way, did about 20 minutes of core before going back to work. We went to Belmar for the first time since the Halloween run. A walked with Ang and Sandy and I ran with Mo & Colfax. The whole run was a struggle. Why on earth I joined this dumb 5K a day challenge is beyond me. 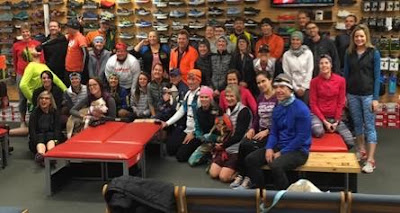 Friday (14,717 steps) - Went for a run at lunch since I wasn't sure when else I would have time. It was pretty cold, and probably not my favorite, but got it done. 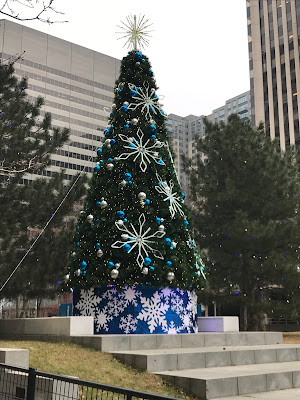 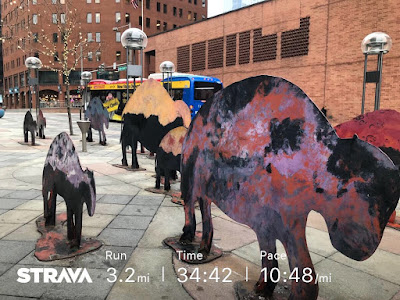 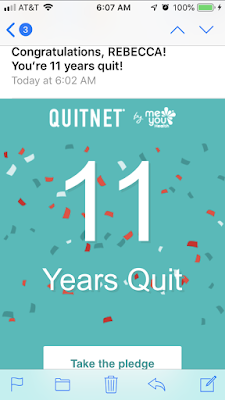 Route change for RER because of icy conditions - moved to Wash Park (not my favorite). Ran two outer perimeter loops with Lisa, that was nice. 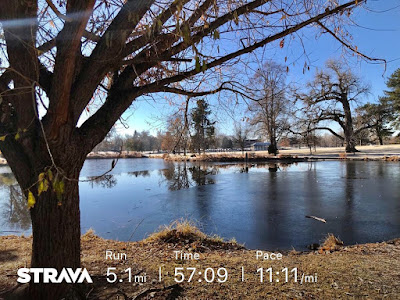 Left at 9:30 to go to the Morrison Nature Center in Aurora for a few hours of volunteer work. We assumed we would be picking up litter or something, but we were actually helping build trails. 50-80 tons of gravel had been dropped off by the city, and we had to wheelbarrow it around a 1/4 pre-existing trail and fill in with shovels and rakes. Yay, manual labor! 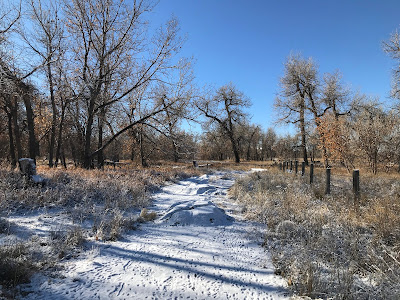 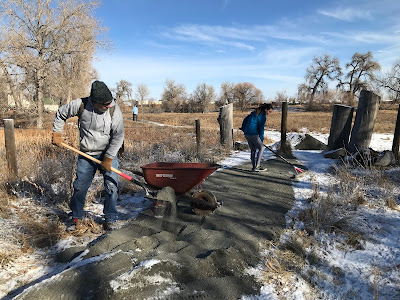 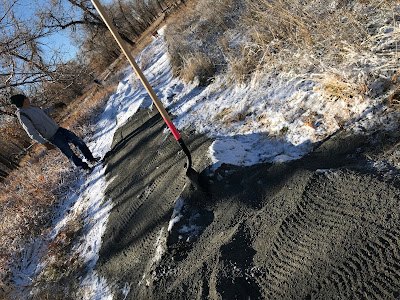 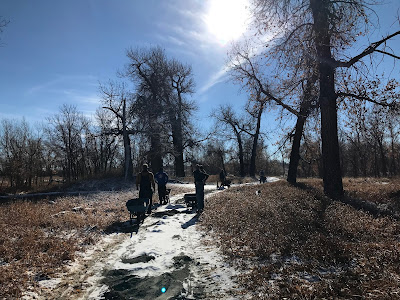 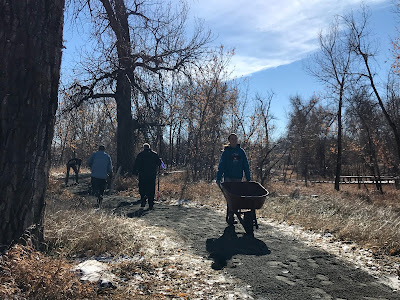 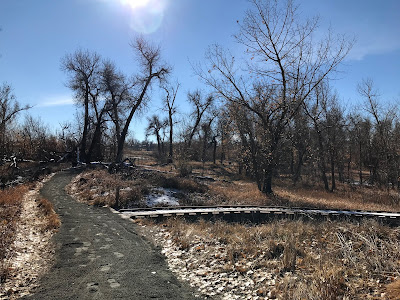 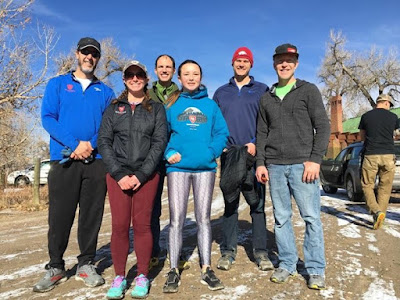 I managed to register right at noon for my last "stupid & insane" race of the year (it usually sells out in minutes so, yay?) Headed back to pick up our aid station, stopped to say hi to Phil. A had homework to do, I made cheesecakes.
Sunday (15,026 steps) - Last RMRR race of the year... at Wash Park again. I had finally gotten a fantastic night's sleep, but I was still tired. A and I both opted for bare legs and it was pretty chilly, especially standing around at the start. My predicted time was somewhere around 9:35, but I knew there was  no way that was going to happen. I've been really tired and unmotivated, so I planned intervals again. Pretty pleased that I was able to manage right around a 10mm pace for the 4.5 miles (two road inner loops). 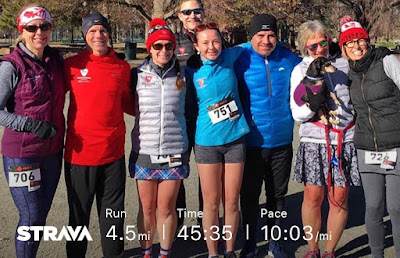 Home long enough to shower and eat lunch before taking A to a birthday party across town. Came back home to get ready for our team party, went back to pick up A. Stopped at the store to pick up some last minute things, then we finally headed down to Crazy Mountain just after 5.

Such a fun night with all my favorite people in one place! Like last year, I managed to not take any pictures, and I think I was only IN a handful, thanks to Jen.
Also, it's now "public official" that Ben and I are dating. Whee! (No pic of us either, apparently). Got home maybe around 9, don't really remember. Fun day!
Monday (13,721 steps) - Left work early because A had a dentist appointment. Headed over to Runners Roost Stapleton for the first time on a Monday since the store opened earlier this year. Got to see fellow teammates Holly & Bill working, and Othman showed up right before the run, and we got to share some miles. 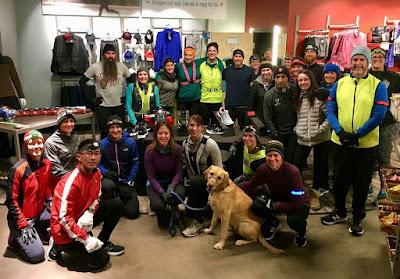 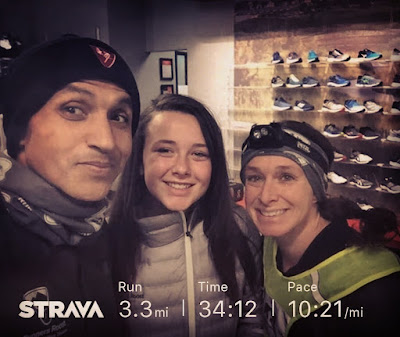 Quick stop at Station 26 after for snacks and a drink before heading home (actually at a reasonable hour). This is a fun group, I'd like to make it over more in the winter!
Stats: