Tuesday (15,790 steps) - Barre Express with Gabi. A wanted a rest day since she was tired from camp. I opted to run for 40 minutes by the lake. It was hot, but not nearly as hot as my phone would have liked me to believe (92 degrees). 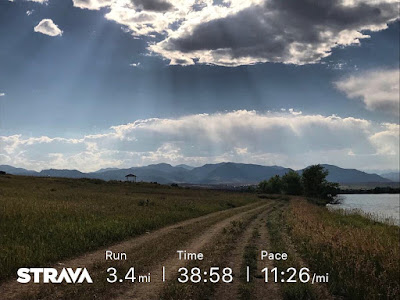 Wednesday (20,339 steps) - Runners Roost Boulder! Oh lordy was it a hot day. We were just over 100 degrees for a high. I was optimistic that the run might not be horrible because we had some cloud cover. However, we had some weird gusty wind that made it resemble running into a blow dryer. Overall, I didn't struggle as much as usual. Still the slowest, but I got some good speed on the descents. 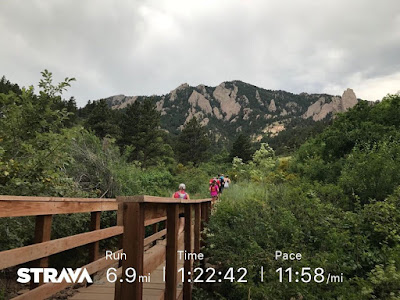 So, it's been a while since I won a raffle. You will all be shocked to hear that I won the grand prize (again) of new shoes! The only pair of Mizunos I have ever owned were Cabrakan trail shoes (eons ago). Turns out, Mizuno no longer makes trail shoes in the US. Actually a good thing for me, as I'm running out of road shoes! I opted for the Wave Sky - they seem a bit more cushiony, which is kind of what I was looking for. 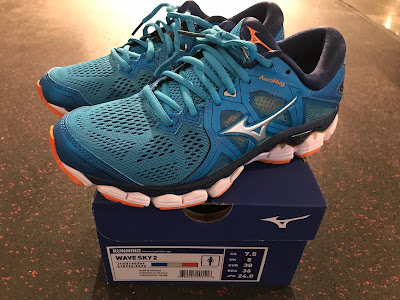 Thursday (11,101 steps) - Once again, A said it was too hot to run. I could not disagree, PRETTY MUCH THE HOTTEST DAY EVER EVER EVER. 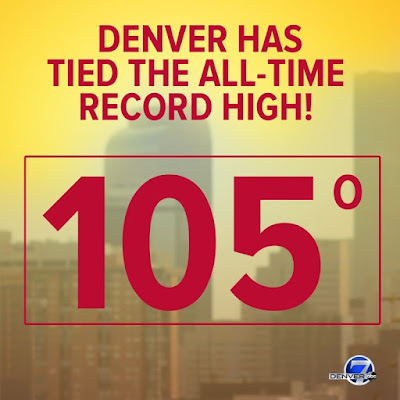 I did, however, talk her into a walk to the lake (with the promise of a Dairy Queen reward). Gorgeous day, but ick. So steamy. 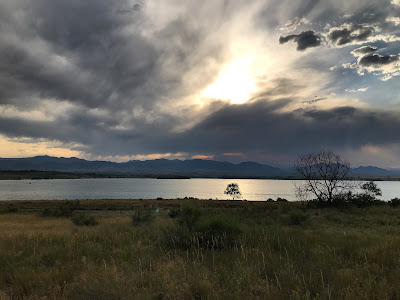 Friday (12,986 steps) - Barre with Gabi. Pretty sunrise, but the only place I could take a picture was on the pedestrian overpass, so it didn't come out great. 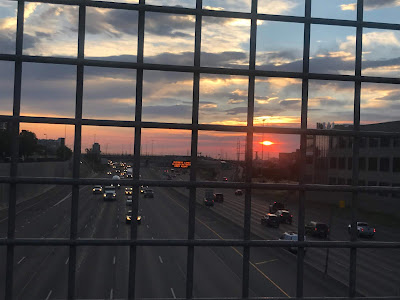 After work I finally tackled more of the cleaning/organizing that I've been putting off for the last few weeks. Riveting evening!
Saturday (42,859 steps) - Looooong run with Runners Edge! Lisa had asked if I wanted to run with her. I definitely wanted to run with SOMEONE, since I haven't run over 14 miles since Romania. Lisa, however, is substantially faster than I am, so I was concerned that she would end up dropping me. Turns out, the run actually went way better than expected, and the wheels didn't start to come off until after mile 17. Only picture I apparently took all day... 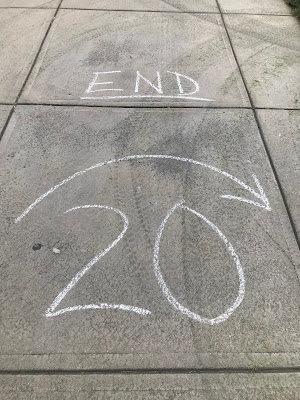 If I remember correctly, there was more cleaning (I think I even cleaned the bathtub?) and of course we got in some TV watching. No recollection of the evening.
Sunday (40,180 steps) - Lisa had also asked if I wanted to run in Waterton Canyon with her and Jandy for 16 miles. I was actually more worried about THIS one. The first 6ish miles of Waterton are on a dirt road. Not technical at all, but a gradual uphill the whole way. I've run out there a dozen or so times over the years and have ALWAYS struggled. Both Jandy and Lisa are faster and I really didn't want to be taking walk breaks all the time, so it was tough, but I managed to run the whole way up, with only two short drink breaks. What a confidence booster! 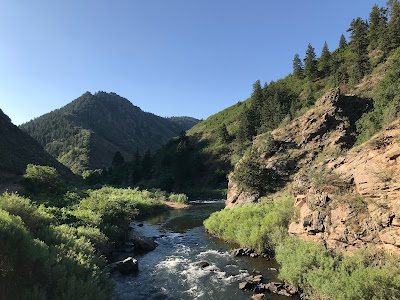 About a mile before we reached the actual trail we happened to run into Michelle and her boyfriend. I love seeing people I know when I'm out for a run! 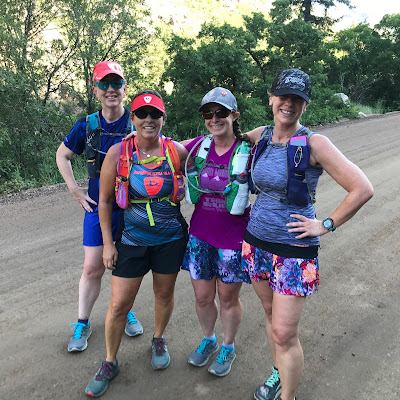 I hadn't run this far up the canyon in a few years, and I'm always a little googly-eyed with how pretty it is! So worth the time it takes to get that far up! Jandy and Lisa are definitely stronger runners on the climbs, I ended up doing a lot of power hiking. 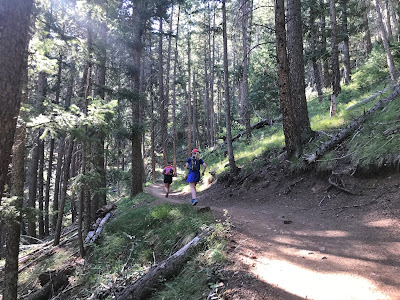 We had plans to turn around at 8 miles. We were also all hungry, so we were planning on a snack before coming back down. We stopped near Lenny's Rest (bench is actually missing right now) and were talking about having to go a quarter of a mile further so I would have 8 on my watch. Two guys on mountain bikes suggested that we do the Roxborough Park loop, and that it was "almost exactly 16 miles." None of us had done the loop before, but it's always nice to run different sections, so we thought that would be fun. There was a little bit more climbing that I think any of us expected. But it was SO PRETTY. 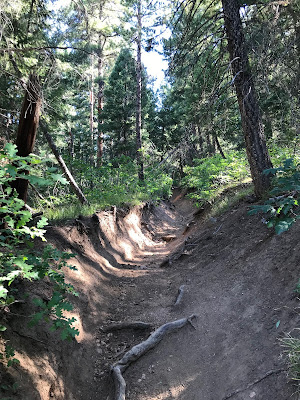 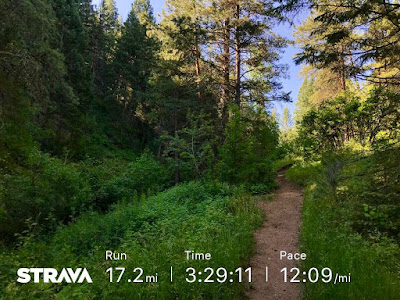 It was pretty obvious that a lot of this section was created for mountain bikers as it was very rutted. The downhills were a little rockier than I like, and I was very surprised at how much faster I was able to get down than Lisa and Jandy. Our 16 miles was over 17, but at that distance, does a mile make any real difference? Of note, I wore the Hierro 3's, and they really bothered the bottom of my big toes. So I guess they will NOT be my ultra shoe later this month.

I had to rush right home after finishing to take a 2 minute shower and grab food so I could take A and Madi to their Summer camp! Both girls decided they really wanted to go back to the wizard camp (basically a Harry Potter themed camp). The drive was over 2 hours each way, but at least it's pretty! 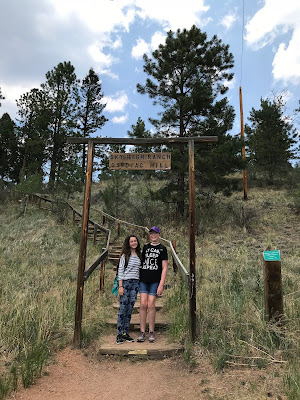 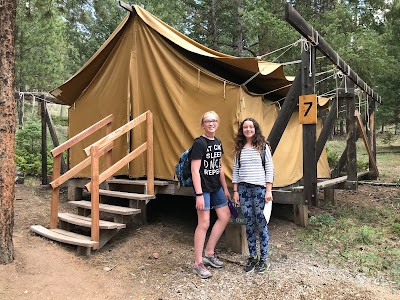 I was STARVING on the drive back, and stopped to get some food at Garbanzo's before meeting up with Lisa. 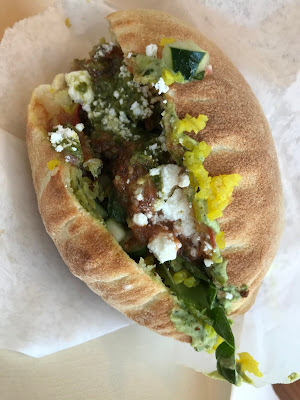 We originally went to a new brewery near her house, Oasis. The beer was good, but at $7, we stopped at one. Instead, we picked up some beer, chatted on the patio, and then I helped her pack (waaaah) for a bit before heading home. 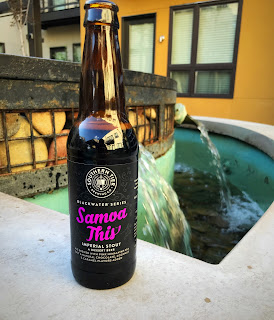 Monday (18,114 steps) - With A gone, I opted to skip the trail run at New Terrain and go to the special off-site run club for Denver Runners Roost at Homegrown Tap & Dough. I got there ridiculously early and ran two early miles with Carol. I decided I would demo a pair of Saucony Rides. 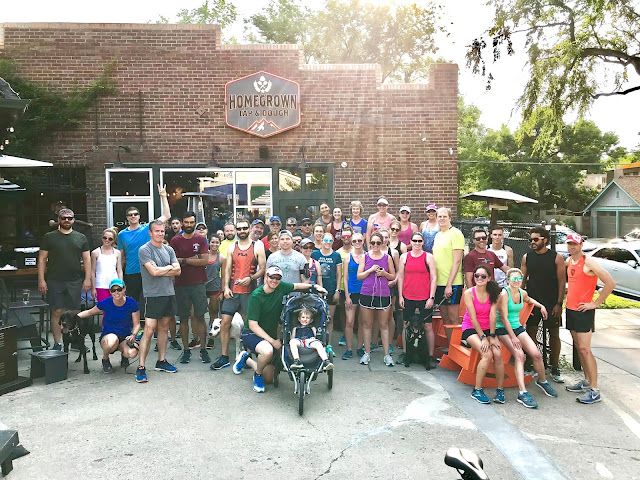 Maureen & Colfax and I ran a big loop around Wash Park. Supposedly it was over 90, but the cloud cover made it soooo bearable. The shoes were fine, but I couldn't seem to get the lacing right and my toes kept going numb. 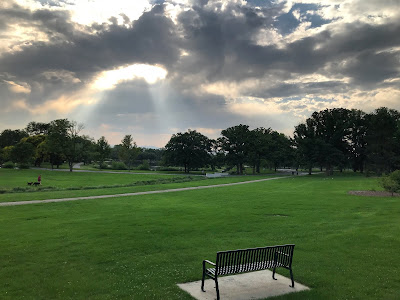 There was plenty of pizza left when we got back, and Locovore was onsite, each runner got a free beer. Then, Maureen talked me into a "froze" (frozen rose, I think). I'm not much of a wine drinker, but this was pretty darn tasty! 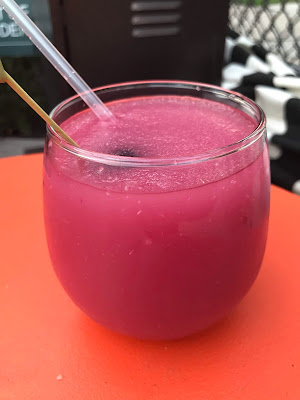 It was fun to see folks I haven't seen in a while, although turnout seemed a bit sparse with it being a holiday week.