Tuesday (10,505 steps) - No barre class, the schedule was bleak for the 4th of July. I had been optimistic that we would have time to get to Runners Roost in Boulder for the weekly trail run, but A didn't get home from camp until after the run started and it seemed silly to drive that far for a burger. 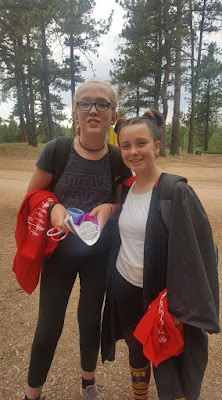 They both had a great time, another successful year at camp!
Wednesday (30,058 steps) - Wake up at 2:50 am (ugh) to get ready and drive to Lisa's house for a 3:30 departure for another 14er! With Lisa moving in a few weeks, this was going to be our last one together for a LONG time (if ever again, womp). Shockingly, there was no traffic at that hour. We arrived at the trail head just before 6, and it was PACKED. Like, we barely got a spot? Crazy, we didn't think it would be that busy, and we assumed we would be safe with that "early" of a start. Mt. Elbert is the tallest peak in Colorado at 14,439 feet. There were two different routes listed, and we picked the shorter, more popular one. With that said, we estimated it was going to be close to 10 miles round trip and probably would take about 10 hours to complete. 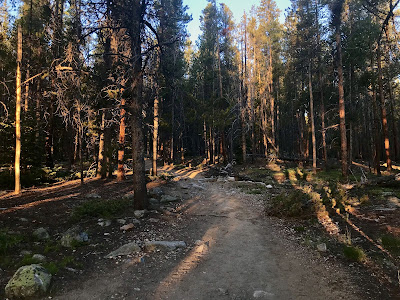 The first mile or so were lovely. Not a lot of climbing and not technical at all. I think that is because it merges with the Colorado trail? Unsure, but it sure was nice. However, we of course realized that the less climbing we did in the beginning would surely mean more heart attack inducing climbing later. 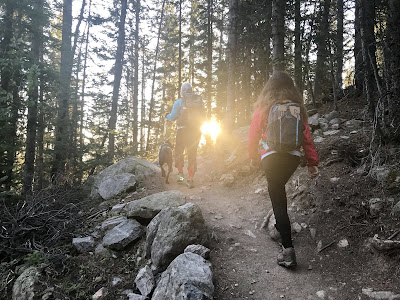 As we should have expected from how full the parking lot was, there were a LOT of people on the trail. I think that this was the most crowded I have seen a 14er, other then Bierstadt (which is typically known as the most popular & beginner friendly 14er. Plus, it's pretty close to the metro area). 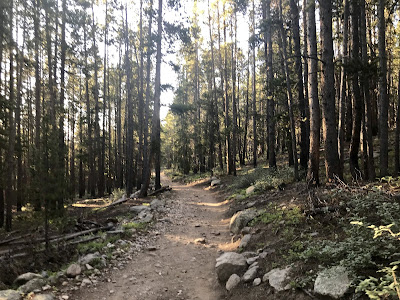 Maybe 1.25 miles in we arrived at the split in the trail. To the left the Colorado Trail continued - we of course were going to the right, up the Mt. Elbert trail. 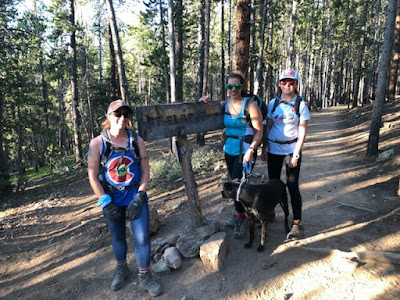 It was already pretty warm, we had all shed our layers/jackets in the first 20 minutes. The first few miles were pretty great thought, the trees kept everything cool. We remained below tree line until about 2.75 miles up. Thanks to our research, we knew that there were not one, but two, false summits. Sky was blue as could be and the moon was still setting. One of my favorite shots from the hike was as we were approaching the first bit of tough incline. 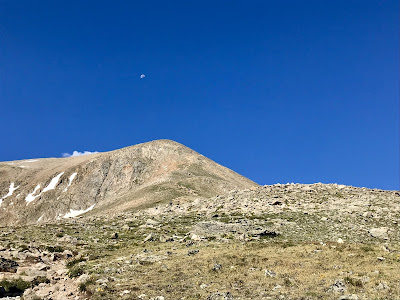 We stopped to ask a few people (knowing we still had a few miles to go) if we were there yet (kind of as a joke). A few guys told us that the section we could see was the steepest, and then it got better after that. That actually was a big mental boost for us. And, turns out, the steep section really wasn't that bad! 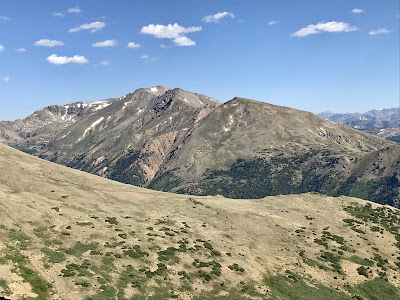 We got to the summit a lot earlier than we expected, AND, it was super nice at the top. There were lots of people at the summit, but the weather was just awesome. I have never been at the top when it hasn't been windy and miserable, so we stayed up there for close to 45 minutes. We had lunch and enjoyed the views. 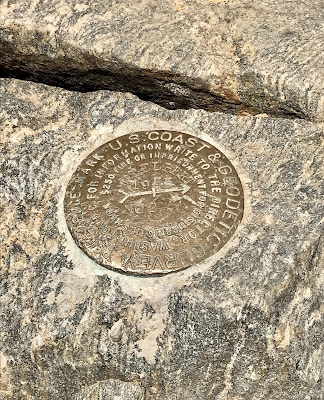 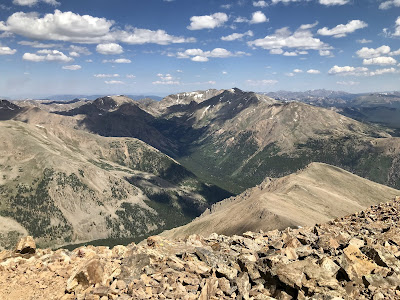 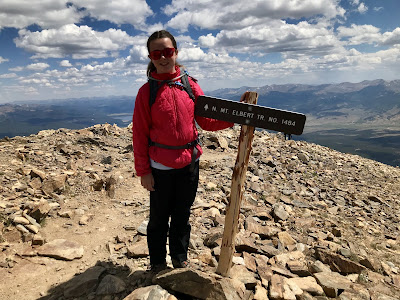 It's always "better" going down, at least in terms of breathing. We took very few stops on the way down. First was to take off our long sleeves and reapply sunscreen. We tried to stop every mile or so to give Lucky more water. 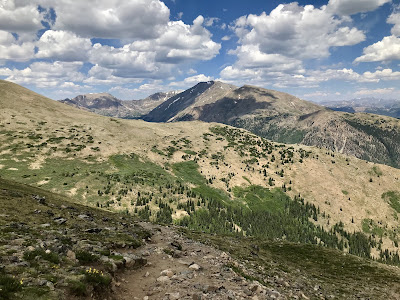 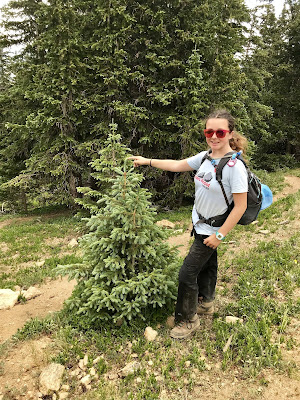 I was REALLY looking forward to the lower section that wasn't as steep. For whatever reason, my feet/toes were not happy with the descent, specifically my big toes. I wonder if that was a lacing issue as well.
Our calculations were "correct," at least in terms of distance. The route we took was supposed to be 9.1 miles, and my watch had us at 10 round trip. Overall, we did the whole hike quicker than we expected, finishing in under 8 hours.

We weren't sure what would be open because of the holiday, but thankfully, High Mountain Pies was open! I had heard about this pizza place from all our Leadville regulars, and it did NOT disappoint. The pizza was fantastic, and we enjoyed sitting on the patio.
The drive home was uneventful. I don't think I've ever seen the highway so barren, especially on a holiday! A and I were home by 6. Did a load of laundry and managed to stay up until 8. Not even sure how many years it has been since I watched fireworks.
Thursday (12,730 steps) - Nothing! My sister-in-law,  Lisa, and my niece were in town! We went out to dinner and then for a walk to the lake. 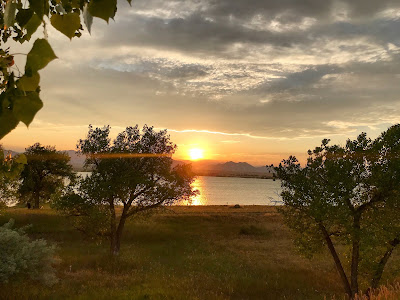 Friday (15,075) - Barre with Hanna. Out to dinner for Greek food with the fam, then we took another walk to the lake. It was a really great (but short) visit. 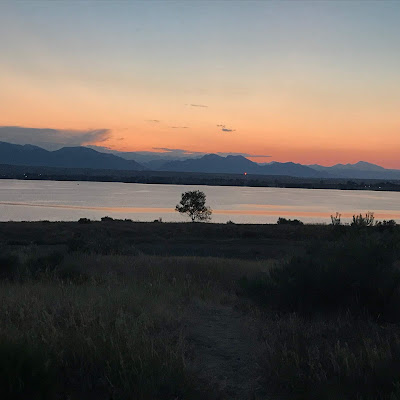 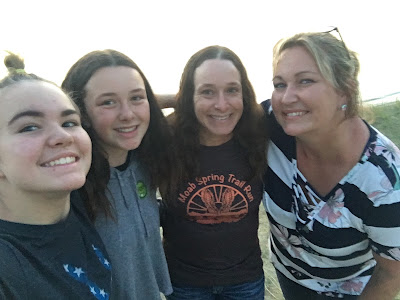 Saturday (32,869 steps) - Runners Edge. Thankfully, we didn't have an aid station AND it was close, so we got to "sleep in." Legs felt ok, but the rest of me did NOT. One of the worst runs I've had in ages, stomach just felt off. Happy I only had 12 on schedule. 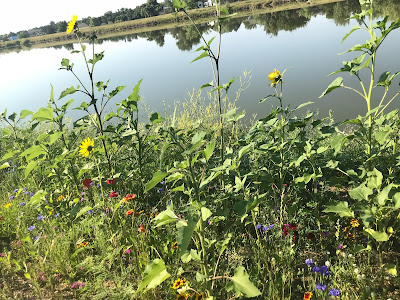 Dropped A off at her friend's house for a few days of camping. Did some shopping, then worked on my DVD project until it was time to meet up with Lisa.
We went to Alamo Draft House to see Jurassic World (which I really liked!) and then had a beer at her place.
Sunday (22,201 steps) - Drove down to Lakewood for the July RMRR race. It was "only" two miles, so I was cautiously optimistic it wouldn't be too bad. Last year I had run the day after Chase the Moon and was painfully slow, so I at least knew I would PR. I started out way too fast the first mile, and then with only a half mile to go (or maybe less) had to walk. Eh, at least I managed to finish under 20 minutes, which is an accomplishment in itself. 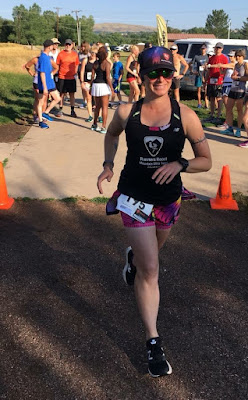 After awards, Maureen & Colfax joined me for another three sweltering miles in the park. 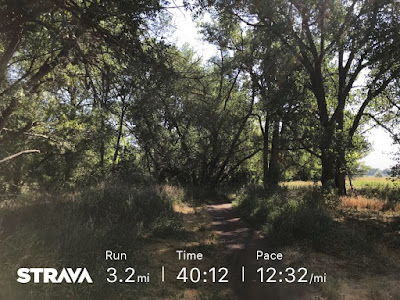 We then drove into Morrison for a late breakfast, and it was phenomenal. Tortilla-less burrito, hashbrowns and a side of french toast. A walk with Colfax by the river rounded out the day. Too hot to do anything else, I finally finished my DVD project. Man, I really love to get rid of stuff. I even did a video! Well, "part" of a video. It was two sets, and I only did one.
Monday (21,231 steps) - I had plans to run at North Table, like usual, but then Lisa said she wasn't going to be able to make it and I didn't really want to be dead last yet again. Especially in the heat (it was mid 90's out). I had plans to run at Bear Creek, but on the way made the decision to stop and run at Green Mountain instead. I had not run out there in over three years. In my head, I was convinced that I didn't run out there because of the propensity for car break-ins (I've known more than a few victims), but in reality, it was my amnesia of how ROCKY the trail is. I compared my time to three years ago and was MUCH faster this time around, even IN the ridiculous heat. 7 miles done (which is more than I would have done at North Table anyway). 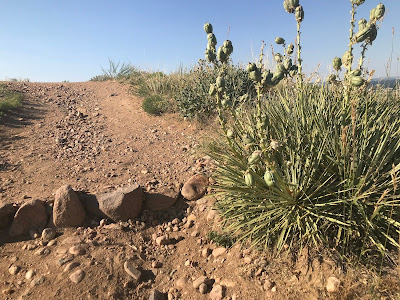 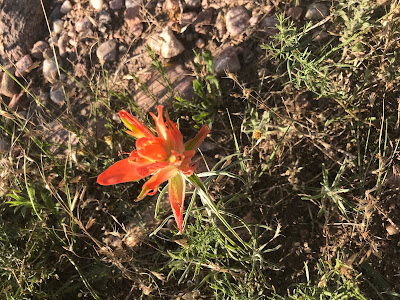 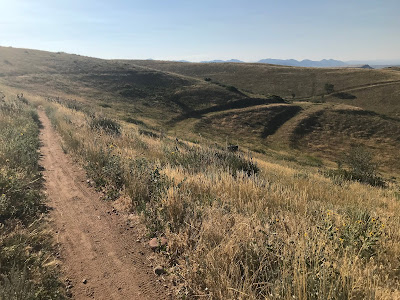 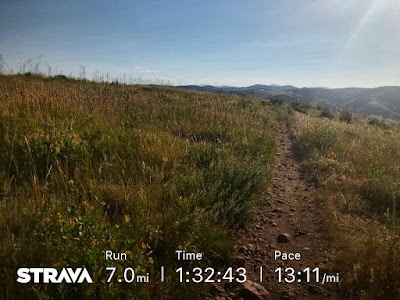 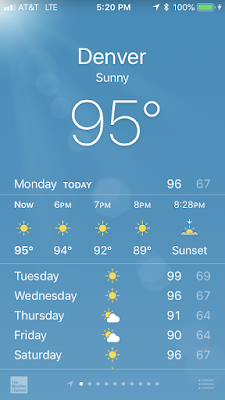