Tuesday (16,136 steps) - Barre Express with Gabi. I've decided that at least one of my barre classes a week will be express. Same workout, but 20 minutes shorter. I can sleep a little later and still get in a workout. I don't know if that means I'm getting tired of the classes (I've been taking them for 2 years now), or if I'm just liking the faster pace of class? Sloan's Lake Tap & Burger run club! I was blah, and ran a solo loop. Just one. I was hot and tired. Pasta and then home.
Wednesday (20,484 steps) - Runners Roost Boulder run club! 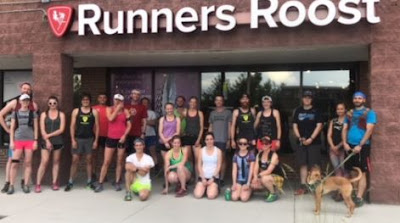 Another challenging run this week, and hot AGAIN. Struggled with this one, was really happy to be done. Beer, pizza, and then a trip to Southern Sun after. 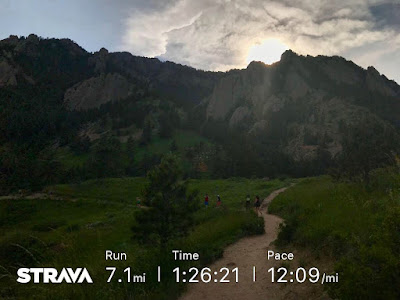 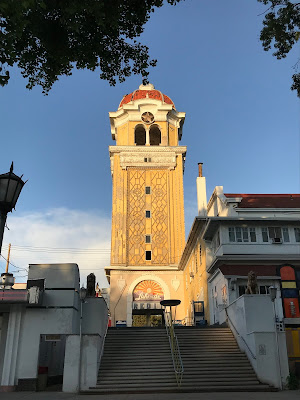 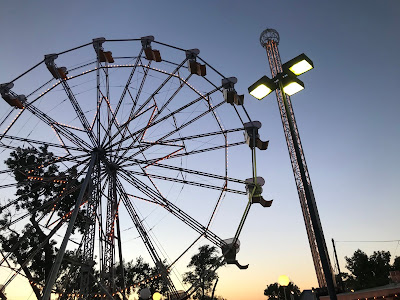 Friday (11,385 steps) - Barre with Gabi.
Saturday (25,953 steps) - Up at 3:45 to go hiking! We got to Lisa's house just after 4:30 and drove up to Buena Vista/Leadville for our first hike/14er of the year. Lisa had picked Mt. Belford, mainly because the trail head would be accessible for her car (not a surprise that many of the 14ers require a high clearance vehicle, which neither of us has). This was one of the toughest ones we have climbed to date. Over 4500' of climbing, and not THAT long comparatively. For some reason both of us thought it was 3.5 miles each way, turns out it was almost 4.5. I think this was the best marked of any of the ones we have climbed, there were a lot of switchbacks (instead of just going straight up), and not a lot of scree. 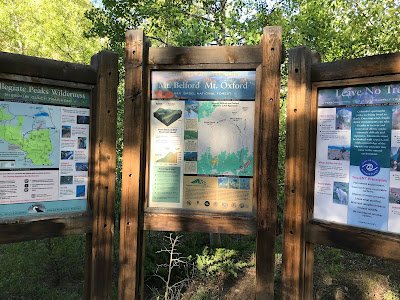 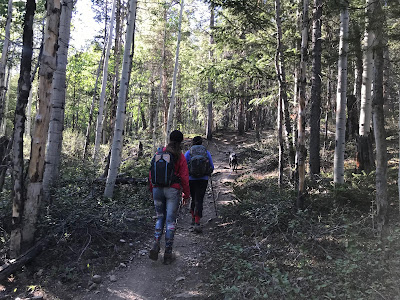 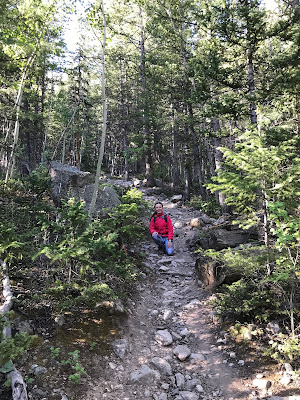 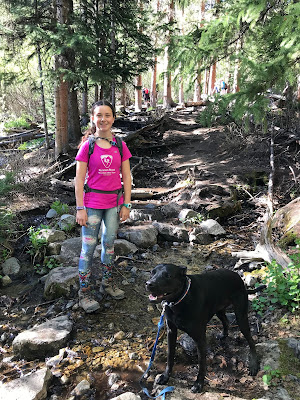 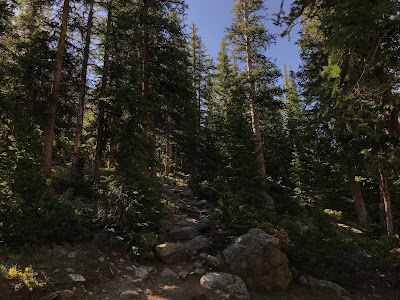 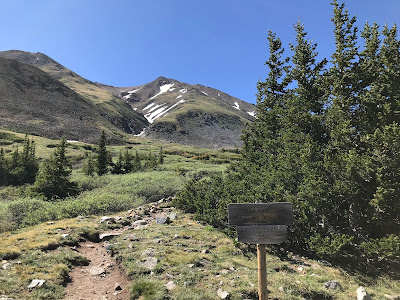 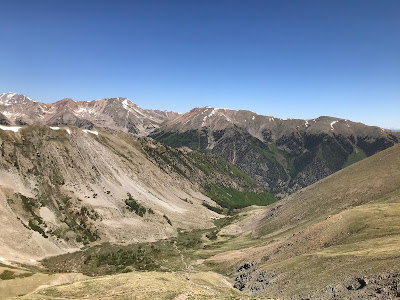 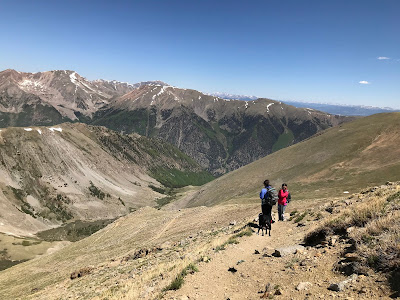 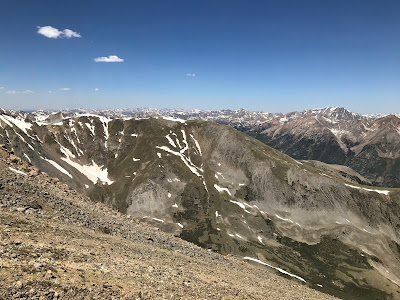 It wasn't too cold and windy at the summit, so we had lunch/beer at the top (around 12:30, before coming down. 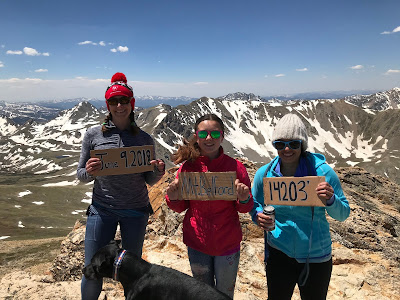 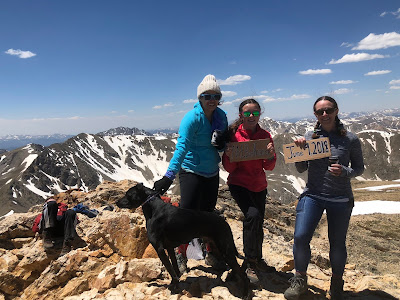 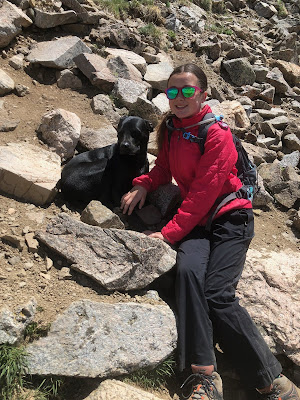 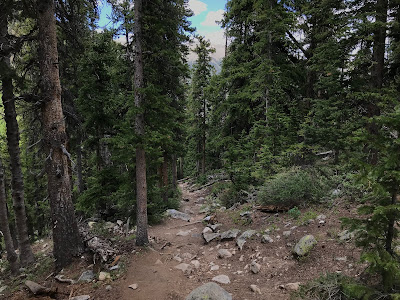 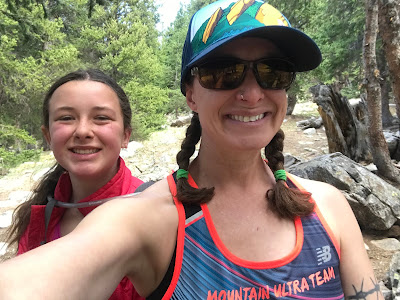 We had expected the whole hike to take about 6 hours, imagine our surprise when it was closer to 8. When we realized Buena Vista was the opposite direction of home we decided to eat in Leadville at the brewery. Food selections were pretty dismal, but the beer was good. 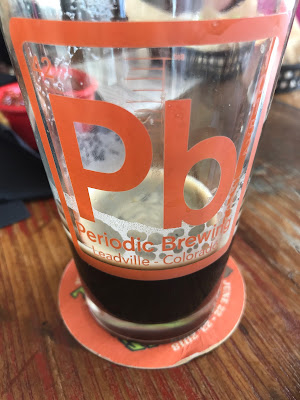 Made a wrong turn on the way home, taking us out towards Minturn/Vail instead of Cooper Mountain, adding at least a half hour. We also had a scare with Lucky, who seemed to be struggling - so it was a stressful drive home. After we got our car, we stopped for FroYo, then in bed super early. What a long day!!
Sunday (28,985 steps) - The "best" part about training for your "A" race in the summer? Not having to get up early. I managed to sleep until 8:30, had a quick breakfast, then went out for my 10 mile run at the ungodly hour of 9:45. It was hot, but I've learned that once you're already hot, it really doesn't get "hotter" - (as long as you aren't starting in like 50 and ending up at 90. Start at 85 and 90 isn't that much different). 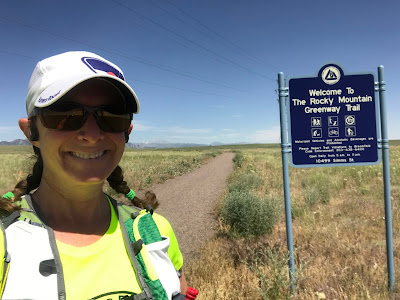 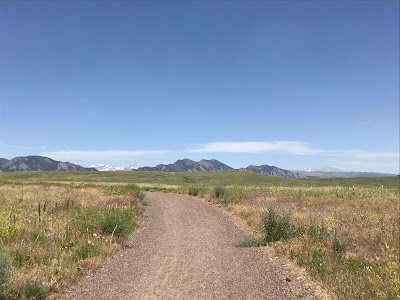 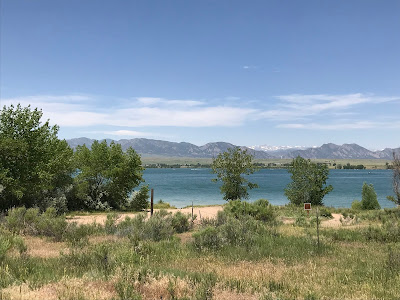 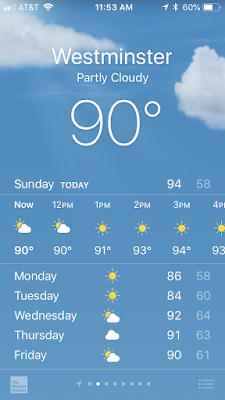 Pace was better than expected, and I got done with enough time to shower before going to Bear Creek for the trail running festival. Had a great time chatting with vendors (mainly the Brandons from Hoka) and having a burger/beer before we had to head out.
Next, we were going to Boulder to volunteer at Ironman, like we have every year since 2011. We were at the info tent with Jeannene again, and our volunteering was pretty limited, but we had a great time spectating! Headed home after 4 hours around 8:30. Long day (again).
Monday (18.093 steps) - New Terrain run club! Another hot day, and my legs were SO TIRED. I really felt incredibly out of shape on this one (more than usual, A wouldn't even stick with me on the climbs). 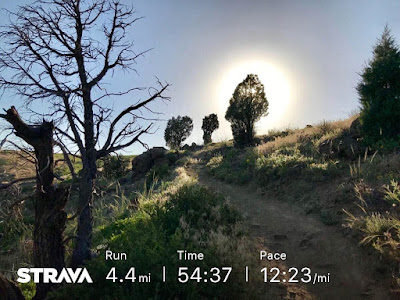 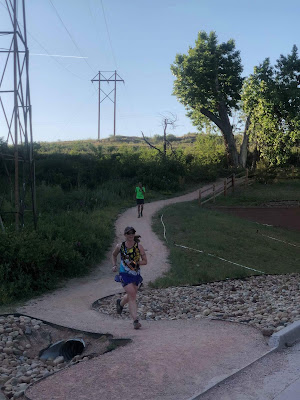 Once we were back at the brewery, I saw that A had taken her first fall of the season (I had warned her that she needed to move on to her newer trail shoes!) Stuck around for a drink and to clean up A's wounds before going home.
Stats: