The only reason this race was even on my radar was the constant bombardment of emails with special pricing. (Oh, and the fact that it was on a Sunday instead of a Saturday). A did not want to run the half, but was in for the 10 mile. I registered BOTH of us for about $60 a few months ago.

I was not looking forward to the late start of 8:00, as it had been a hot few weeks in Denver. Luckily, we woke up to cooler temperatures and clouds. We left the house before 7, and managed to find street parking basically in front of the start line around 7:10. Picking up our bibs took just a few minutes. And then we had about 45 minutes until our start. Used the bathroom, then looked at the course maps that were affixed to the wall. Maps for all distances. EXCEPT the 10 miler. I looked on website. Nothing. Ok, well hopefully it was going to be marked well since A and I were not running the same distance.

Around 7:30 we met up with Molly and chatted for a few minutes, until she saw how long the line was to get her bib and she jumped in line. About 10 minutes until the start and the race director makes an announcement that the start will be delayed until everyone gets their bib. WHEN WILL THAT BE? TOMORROW? Molly is still in line, and in fact, has barely even moved up. At about 8:05, there is another announcement that they will attempt to do staggered starts - so the people that already have their bibs can run, then after everyone else gets theirs, there will be a second start. Oh, and there is a 1M, 5K, 10K, 10M and half marathon, all running at the same time? But now with two starts?

According to my watch, our "wave" started at 8:12 (after announcements no one could hear because the race director wasn't actually facing us, nor was he using a microphone at this point). OK, again, hopefully we won't get lost.

As Molly ran by she said, "this is the first time I have been told I didn't need a bib to run!" And sure enough, she wasn't wearing a bib.

Once we started moving, the initial issues were people running with dogs on the narrow path (on leashes way too long) and a few people with double strollers. It's been a LONG time since I've run a small road race.

Initially, I was pretty impressed with the signage. All the crazy turns seemed to be marked very well, with clear directions of what distances needed to go what direction - yes, even the 10M that seemed to mysteriously be excluded from all the course maps.

Mile one clicked by and I was concerned that I had a sub 11 pace. That can't be good. No good has been coming of me running a "fast" first mile. I promised myself to rein it in and not try to keep up with other folks. Hit the first aid station and slammed a bit of water. It was still overcast and fairly cool, but I knew the clouds would not last forever and I didn't want to be catching up on hydration later. 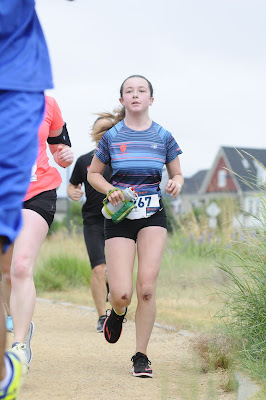 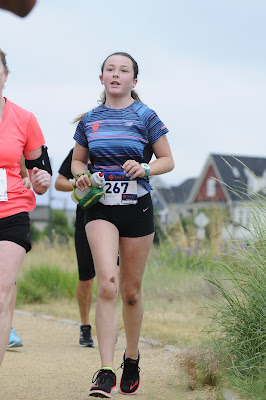 I was not at all sad to see two of the dogs-on-too-long-leashes turn off for the 5K. The rest of us headed to the east of the park. I saw A on one of the out-and-back sections, and it seemed liked she was a little over a half mile ahead of me. Not too shabby for ME, and I felt good about the fact that she might not be running too fast (and then subsequently bonking). I ran extremely strong the first 5 miles, without taking any walk breaks. I took a short break walking up a short hill, and was pretty pleased that I ran the longest section of it - where I saw A on yet ANOTHER out and back section, she was about .75 ahead of me now - which means her pace had slowed a tad. Took another short walk break between mile 6 & 7 because I could NOT open my package of Honey Stingers :(

The first half of the race all the mile markers were right on the money. Mile 7 was the first to be off, although it was negligible, maybe .1. As I was heading into a loop / out-and-back I saw A (again) and mile 8 came a half mile too soon. I would be off by that much the rest of the race. (These pics are coming into mile 9. A would head into the finish, I'd have an out and back to do to get to "HM" distance). 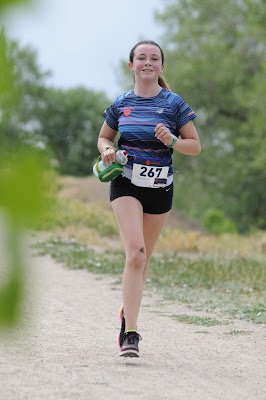 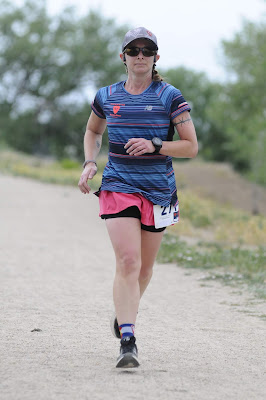 Until about mile 9 or 10 I was still running really strong, taking minimal walk breaks. About mile 10.5-11 was when the sun finally came out and I was really having a hard time. I took walk breaks but tried to keep them short.

As we were heading towards the finish line I caught up to a guy at the Mile "12" marker and asked him if he was also measuring a half  mile short, and he was. I even took a few walk breaks the last half mile, and passed two more people. I heard one of them on my heels, and was pleased that I had enough left to out sprint him into the finish. 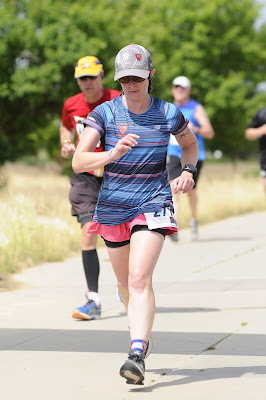 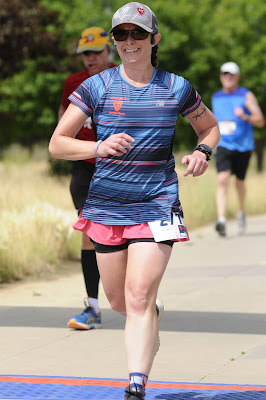 My friend Chewey gave me my medal. I saw A and I went to lie down for a minute. I was BEAT and just needed to rest (and get some water).

On top of everything else, there were no results and no awards happening. (As I write this, 5 days later, there are still no official results. We were sent an email that had places for AG's, but I was listed in the wrong AG, and there were no times. When I emailed the RD, I got this response "I will go in and check your time and email it back to you and change your age group. Not everyone had a chip so I just didn't want to post some times. Does this mean no official results ever? Based on names, I FB'd people and I think I still would be 3rd in my current AG based on the FREE race pics that were emailed).