Even though I have resigned from being an ERS ambassador, I really wanted to run this one. For the last 5 years the course has been on Big Dry Creek - NOT EXCITING. This year, ERS got permission to run around Standley Lake - my backyard! A's friend had spent the night, but with the race start being only 2 miles from our door, we didn't have to leave until 7 am.

We arrived at Wayne Carl Middle School less than 10 minutes later (yes, even though we could run there in two miles, it's probably 4-5 miles driving because of the lake/neighborhood). There was already almost no parking left, and until the race started I watched people frustrated and annoyed that there wasn't more parking. But who shows up to a race with three distances 15 minutes before gun time and expects to be able to park right at the start?

Anne had the Roost tent set up, so we left our stuff there, made the rounds saying hi to people and picked up our bibs. I love that ERS listened to our suggestions and made shirts an add on, versus just giving it to us in our bags. Literally just a bib. Love not getting all the junk! Got into the bathroom line, then decided to run back to the car to grab my aftershockz in case I wanted music later. We saw our buddy Ross, who took about a half hour early start.

The race started right on time, at 8. It was already super sunny and H O T, and I knew there was no shade at all on the course. This was going to be a long day. Annette and I ran together for about the first 2-3 miles. First we ran north and then west. This was perfect, as there is very little climbing on this section and I hoped that it would give my legs a chance to warm up.

First aid station was manned by none other than Michelle and Scott, great to see familiar faces at aid stations! 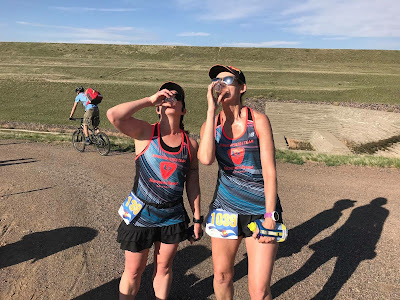 Then I knew we had the LONG climb up - and I DIDN'T HAVE TO WALK. Hurray!! We were on the lower trail section near the water, then onto the new Rocky Mountain Greenway connector. 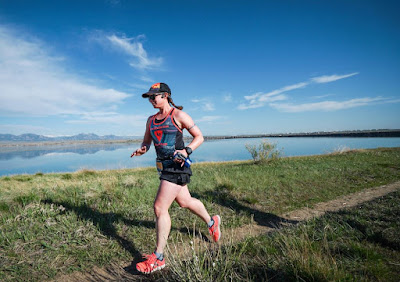 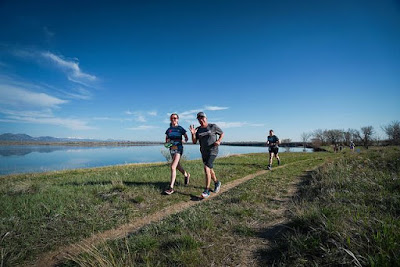 Another aid station at the bridge by Kipling, then onto the section I was really looking forward to. Every time I have run out here I have run the single track nearest the road. I hadn't ever really been on the trails closer to the water on the south side. It was in this section that I saw A!! She looked happy (and fast) and was a few people ahead of Tom, who was supposed to be pacing her. Right at their turnaround I saw the "hill" we would have to go up later. Ugh. 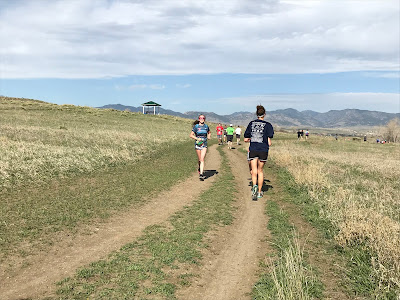 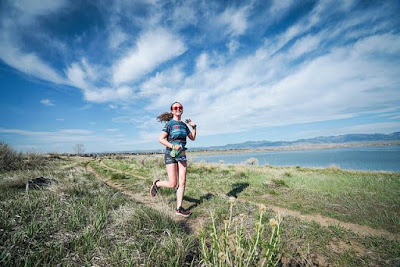 There was actually a LOT more climbing than I expected on this course, over 700'! I was heading up one of the climbs and saw Becki already heading back from doing the lollipop loop. That section was where I finally started making some ground on passing people. Some nice single track on the way back, hit the aid station, then it was time to go up the hill (ugh!) and head back. Running along the lake was nice, and not technical. 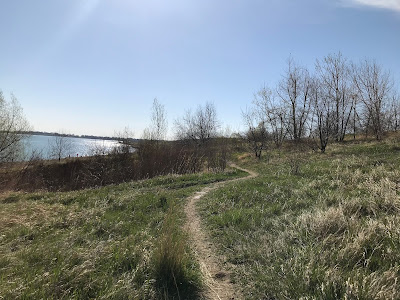 Passed the aid station near Kipling, then headed back to the next little loop we would have to do. We had a very small section of pavement, and then looped on some overgrown trails, and then back up to the aid station. Thankfully, the course was going to measure a bit short, so I gave it everything I had and ran to the finish, one of my fastest times in ages (and on trail!) 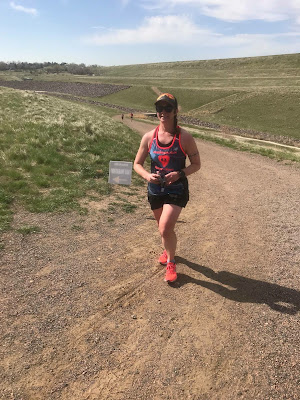 A, meanwhile, ran the "10K" in 52:07 (her watch measured 5.82 miles). She took first in her age group (by quite a bit), and was NINTH FEMALE OVERALL. She is still starting out a bit too fast, but she is getting better. Thankfully, her friend got a picture on the podium since awards happened while I was still out running. 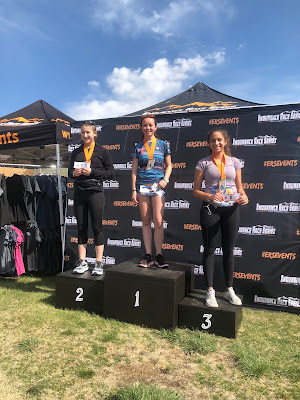